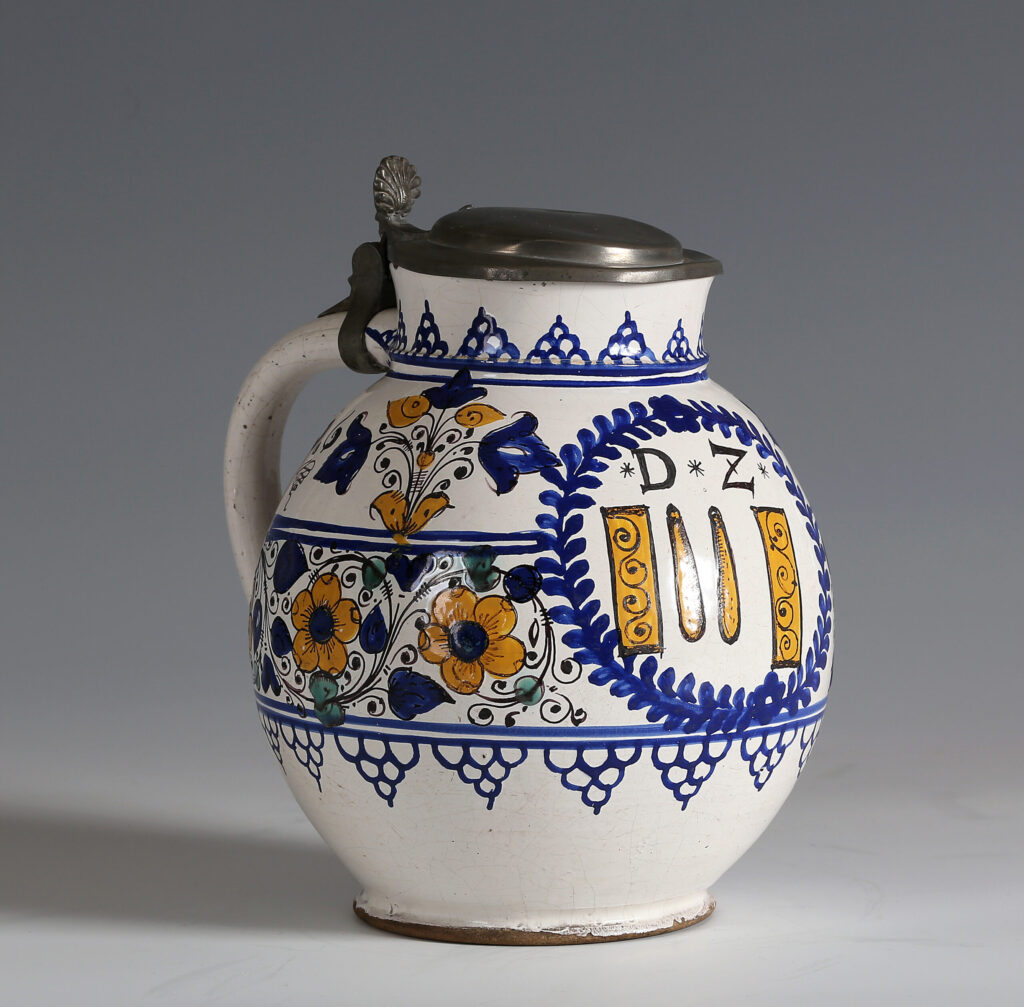 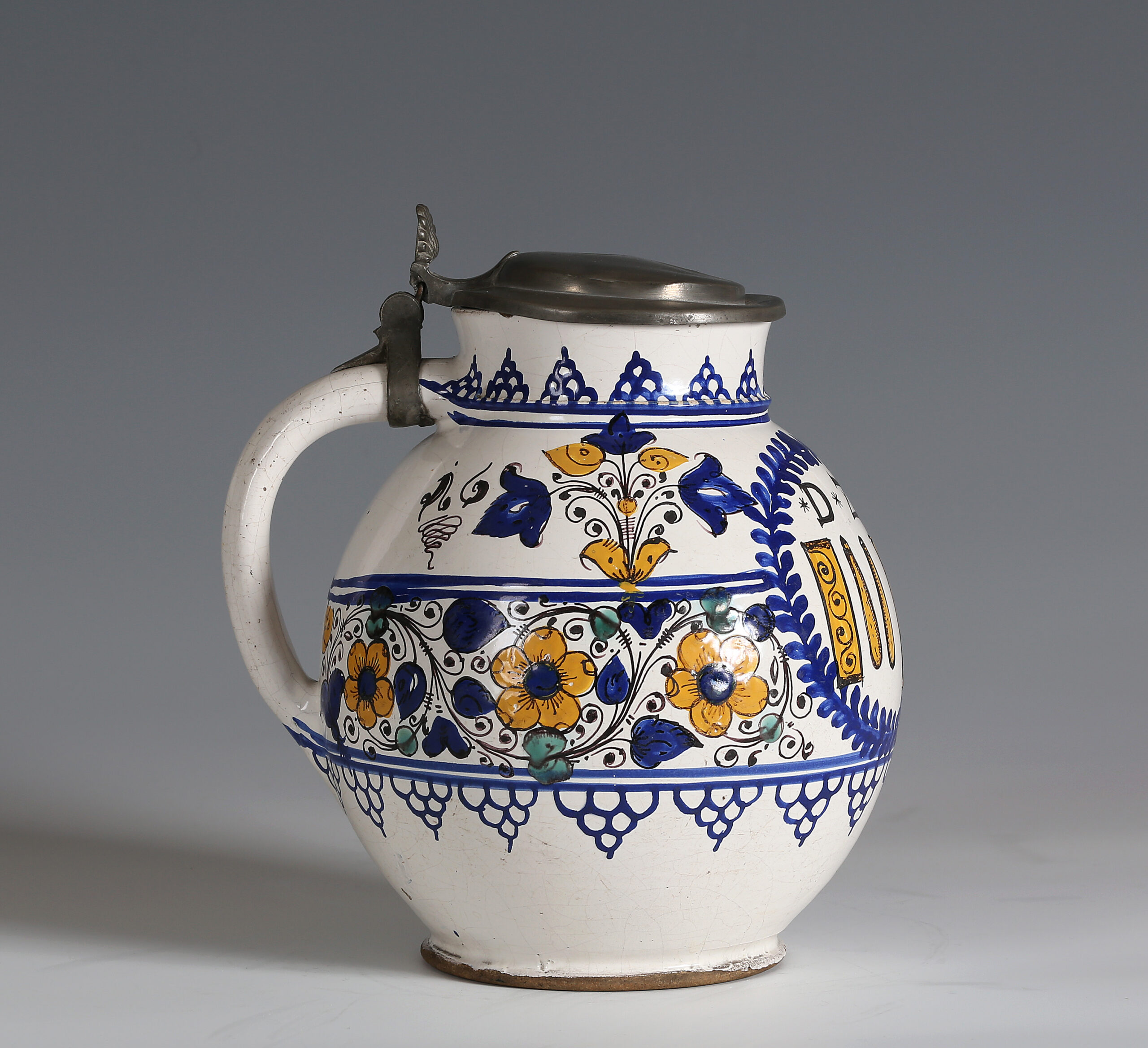 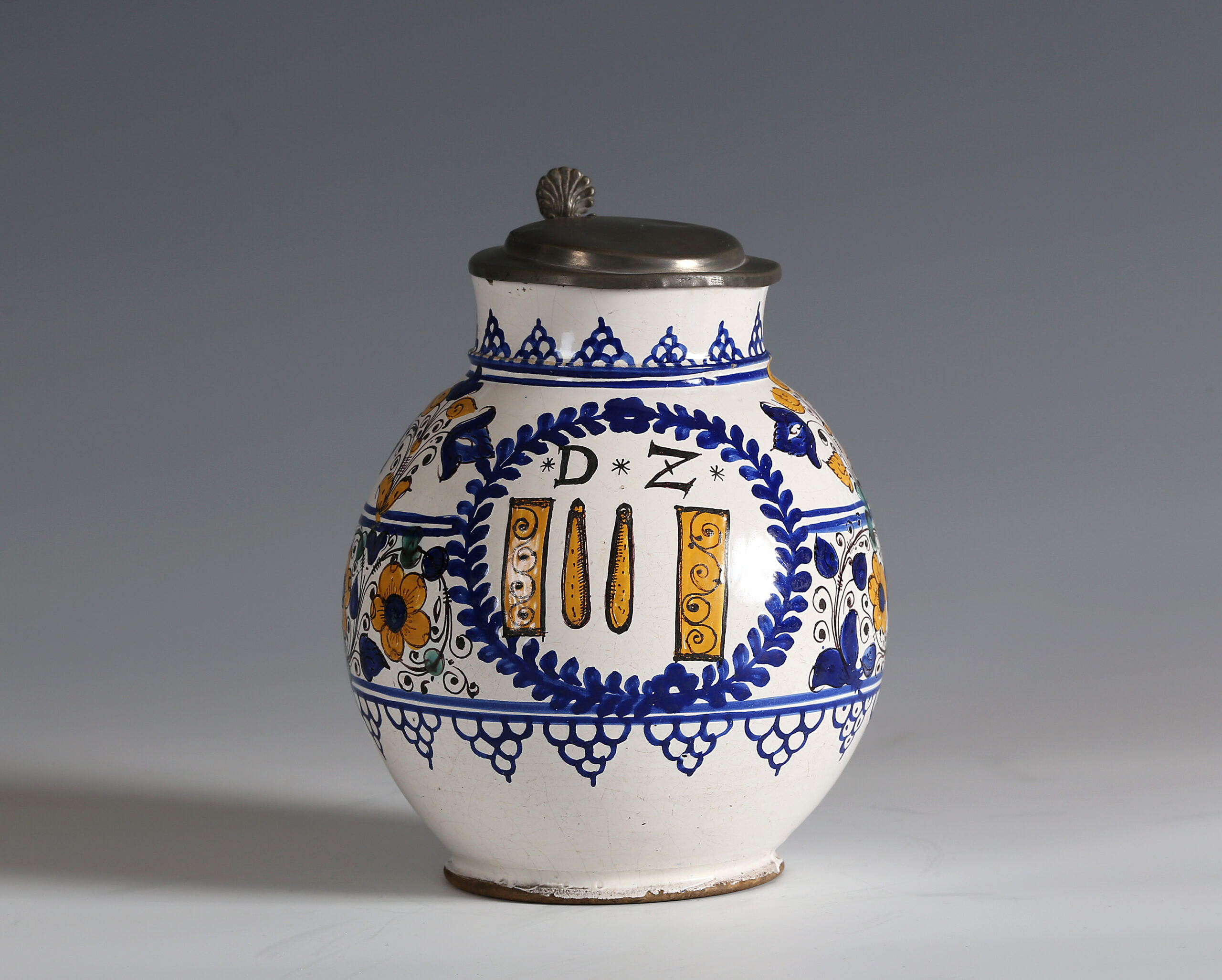 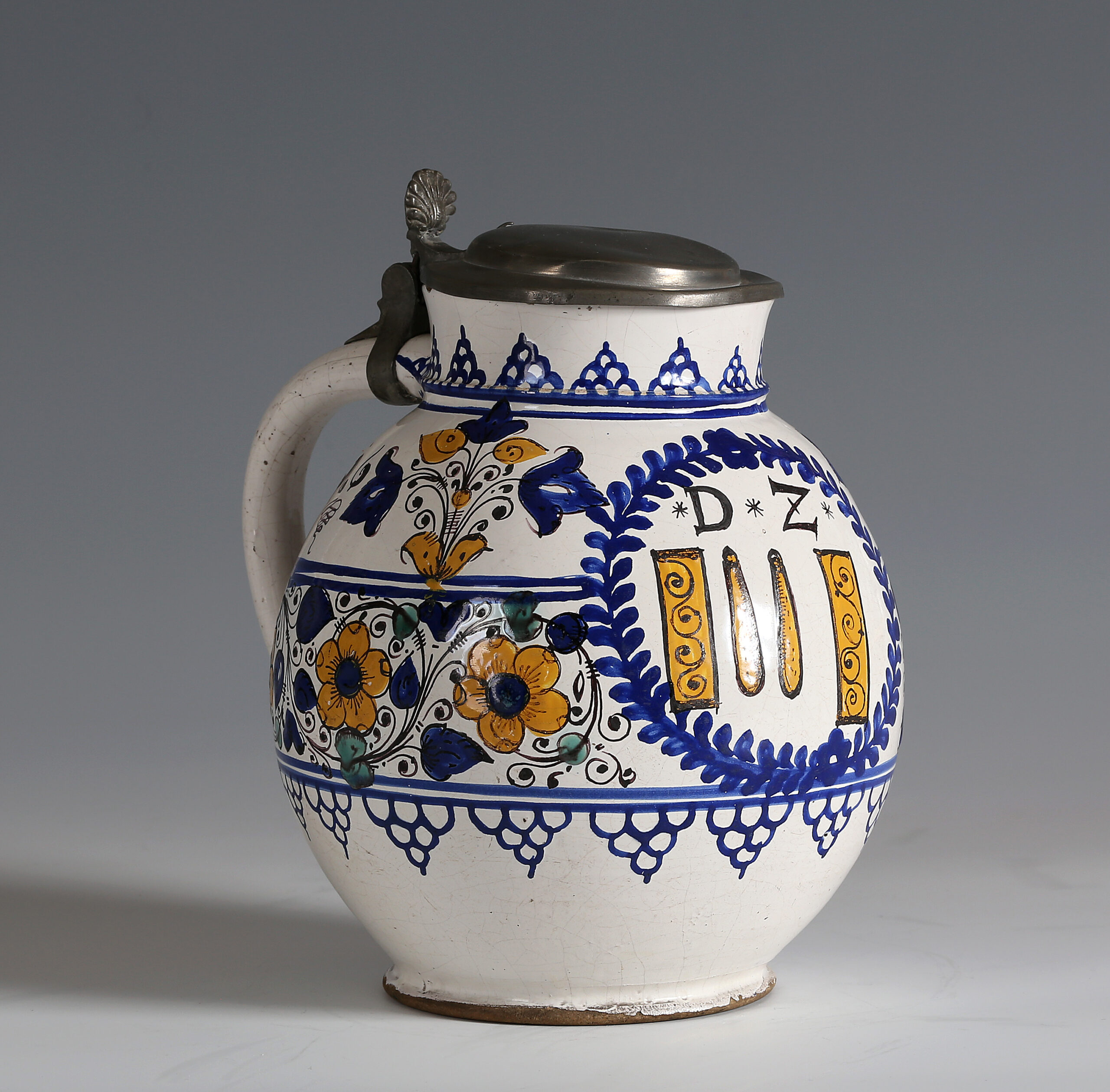 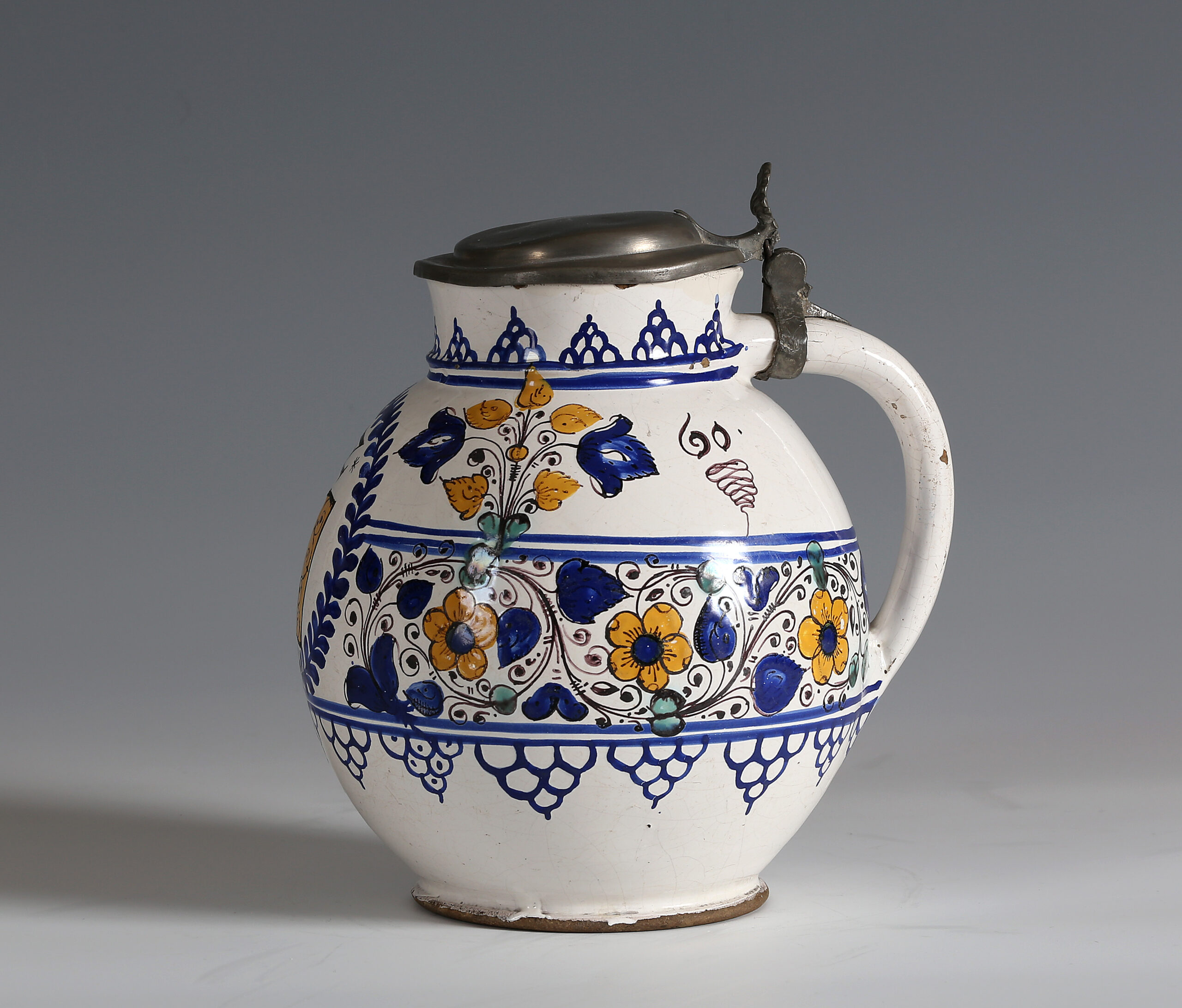 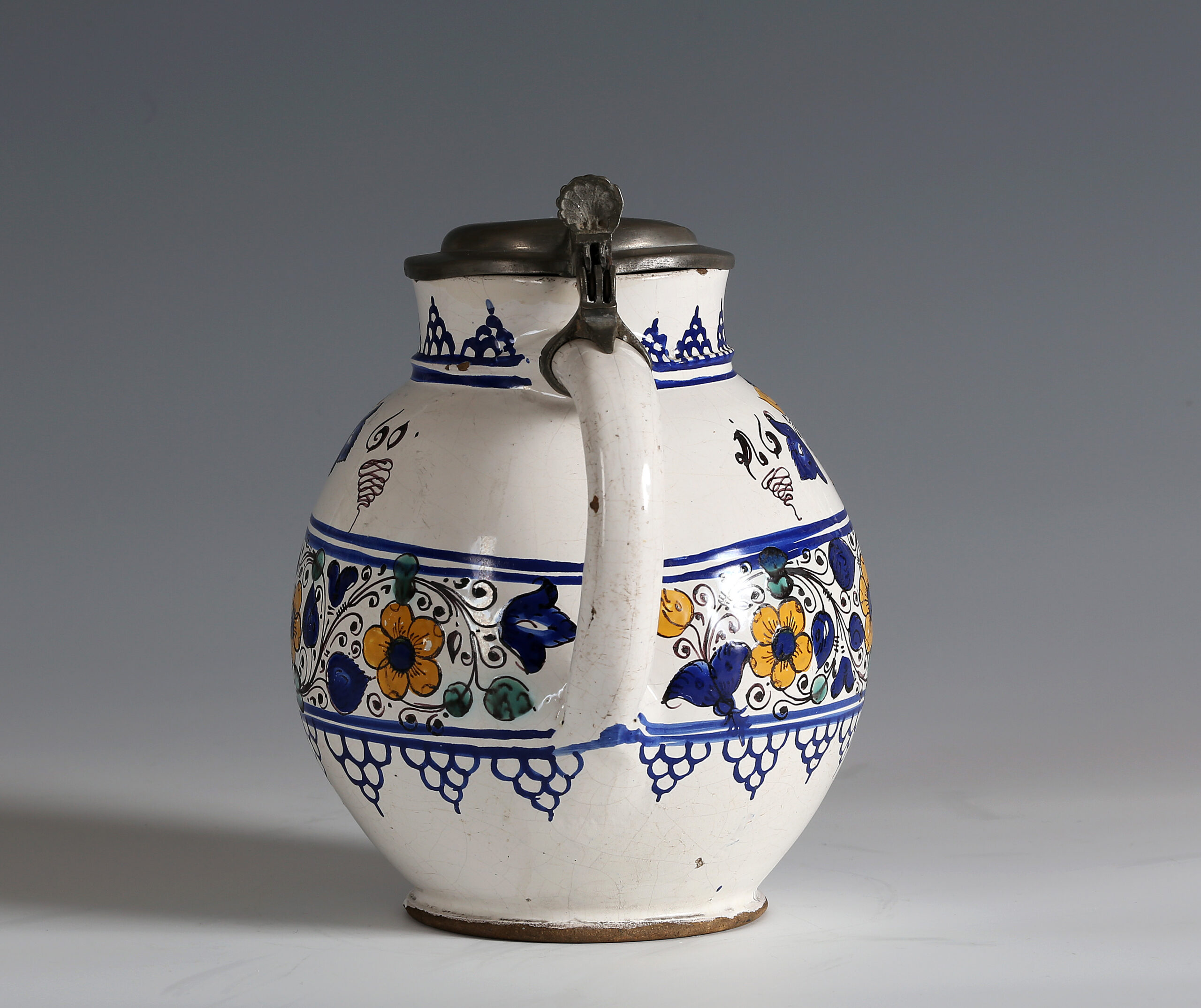 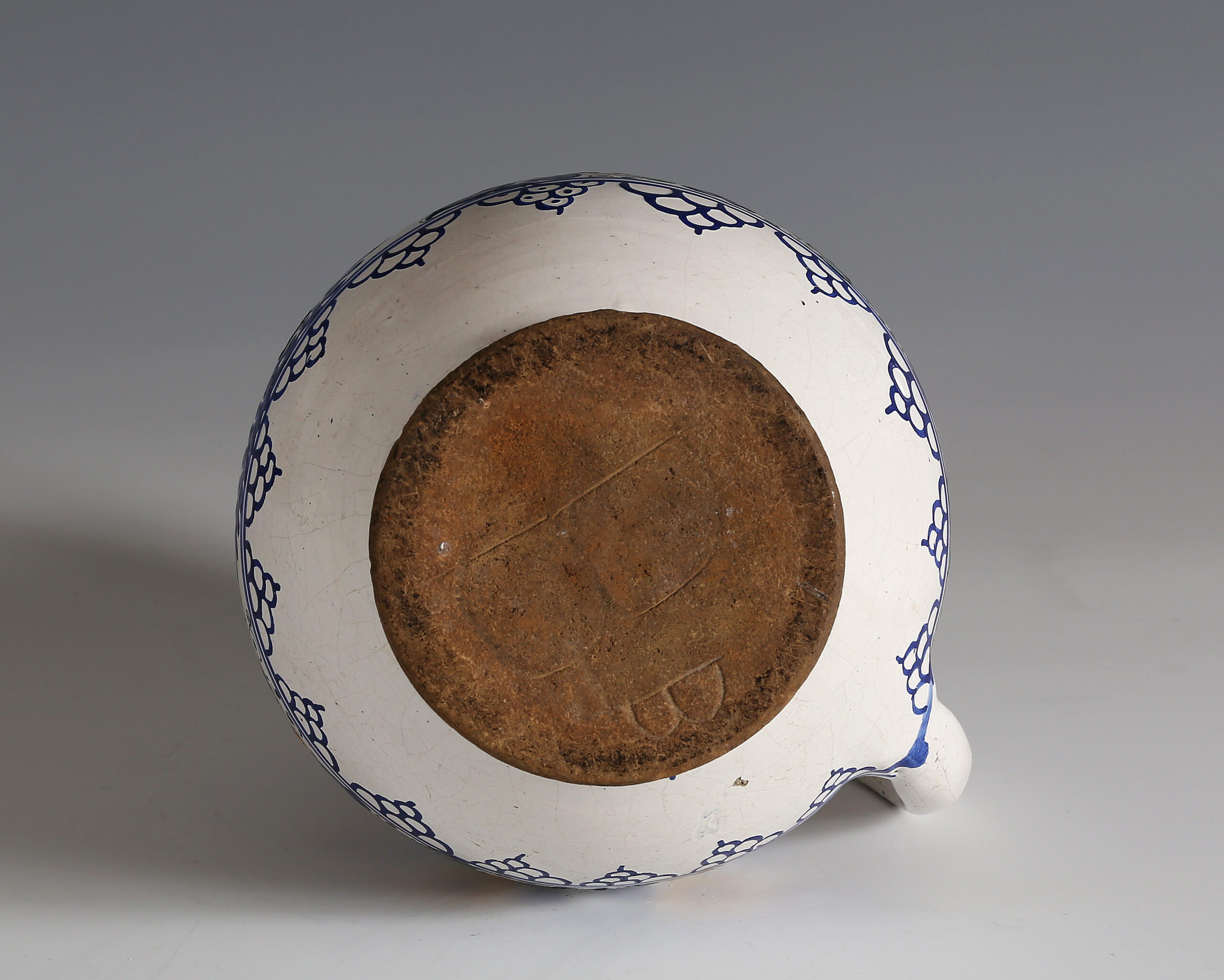 Decorated with traditional foliate scrolls between blue bands with a scale pattern on either side. Adorned to the front with the symbols of a trade. It has been suggested that the trade represented might be butter making, or ironmongery.

The Anabaptist potters of central Europe produced some of the most finely potted wares of the 17th century characterised by bold designs of striking clarity on a tin-glaze of unusual density.

The Haban community emerged from the 16th century Swiss Reformation movement. They differed from the Catholic and Protestant churches because of three beliefs which resulted in their persecution and consequent migration towards the western and eastern peripheries of Europe. The first of these beliefs was to prescribe to the principal of adult baptism and to reject infant baptism, taking the view that one must first understand and believe the gospel to become a Christian. This led to many converts who had been baptised as infants to be re-baptised and the term Anabaptist, meaning to be baptised again. It also meant in the eyes of the Catholic and Protestant churches that their unbaptised children were at risk of losing their salvation. The second belief was in pacifism which meant that they would not participate in any sort of conflict or pay taxes towards military endeavours. The third belief was the principal of a ‘community of goods’, where nobody owned property and all things were shared within the community. This resulted in them being able to produce high quality artisan goods cheaply, causing resentment and jealousy as many of the local lords would favour their products over those of the local population. The Hutterites are a subsect of the Haban community, followers of Jakob Hutter, and are first recorded in Hungary in 1523.

The Haban who migrated to Moravia, the small part central Europe between Austria, Hungary, the Czech Republic and Slovakia, became famous for their pottery. Living in highly organised communities they lived their life by a strict set of rules or ordinances including those for the making and decoration of pottery.

An ordinance, written in 1584, dictated that: ‘Potters should not create new shapes, especially ones that are not proper, nor apply new colours according to their liking, painting one piece with one and another piece with another colour. No potter should try and take away business from the other, because that would cause competition and strife between the workshops. Therefore, the brethren should produce the same shapes in the same way they have always done. They must not create anything that differs from what the others produce.’ As if that wasn’t enough, another ordinance written in 1612 says: ‘The decoration must not be overdone, and such things as do not appear suitable to us, as pictures of birds and animals and the like should certainly not be depicted.’ Pieces like this would have been thought of as ‘fancy’ and would have been sold outside of the community, pottery made for the community had to be strictly utilitarian and unadorned. A Hafnerordnung dated 1640 prohibited the polychromatic glazing of stove tiles and the making frivolous bottle shapes.

Their early wares are characterised by a noble simplicity with characteristics that can be traced back to the compendario style of the potters of Faenza who escaped to Switzerland to escape the religious persecution of the Inquisition before continuing their migration to Moravia. They were also influenced by the Ottoman ceramics of nearby Turkey. The Haban potters were for many years tolerated by their Hapsburg overlords but subsequently persecuted. In 1669 Turkish armies occupied much of the area and after the area was liberated by an Austrian led coalition in 1686, many Haban emigrated or were forcibly converted to Catholicism and the ordinances lapsed, consequently the high quality of the pottery declined.

Condition:
Some chips to rim, slight denting to lid, no restoration

Provenance:
From the collection of Dr Rudolf Leopold, Vienna