A MEISSEN PUNCH BOWL, COVER AND A DISH 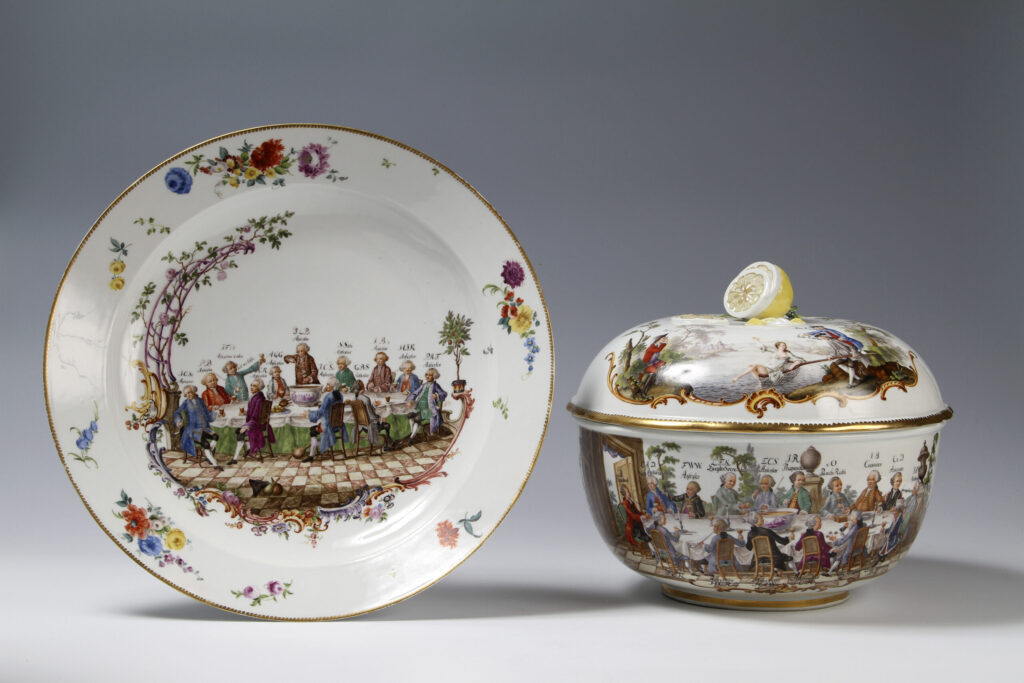 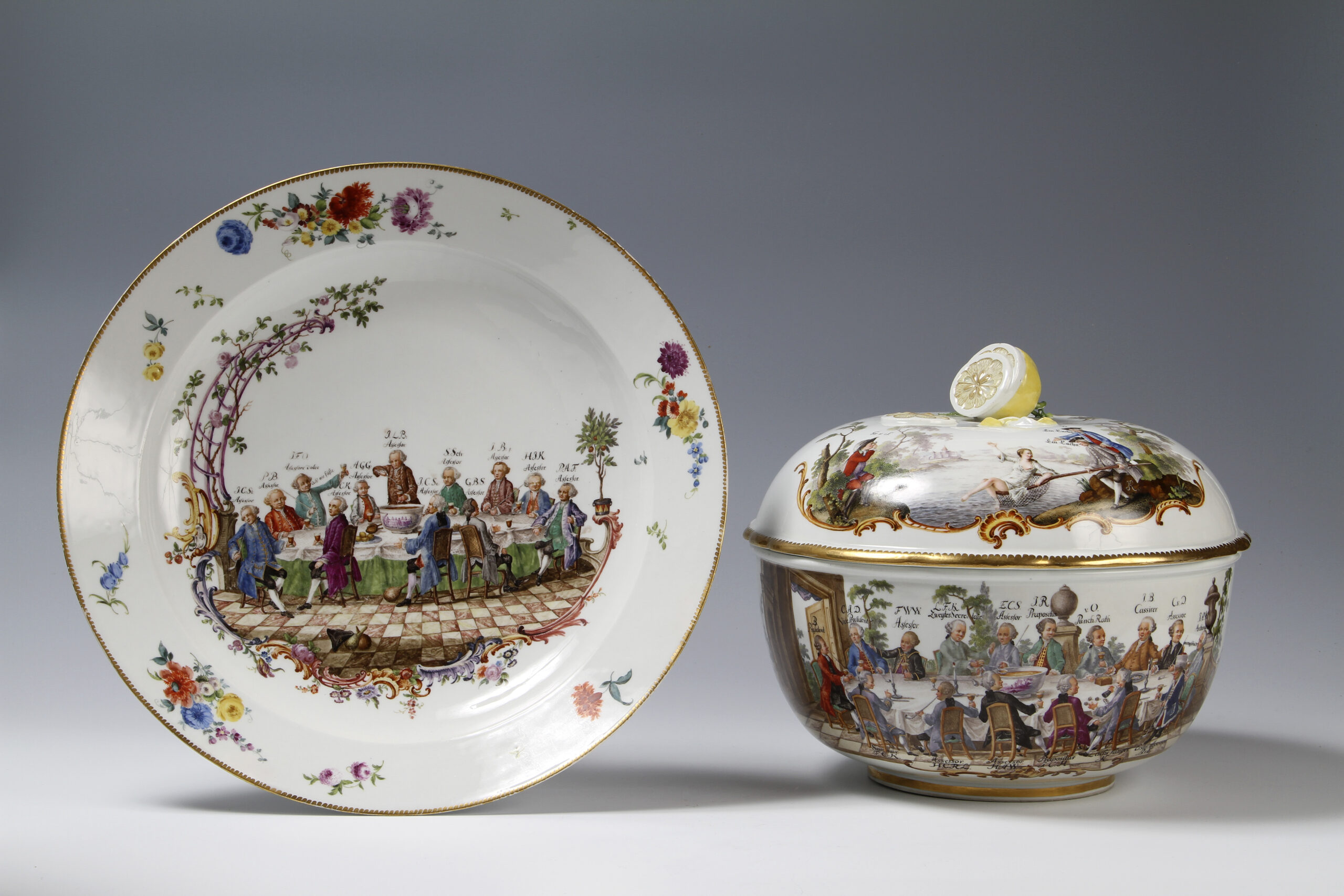 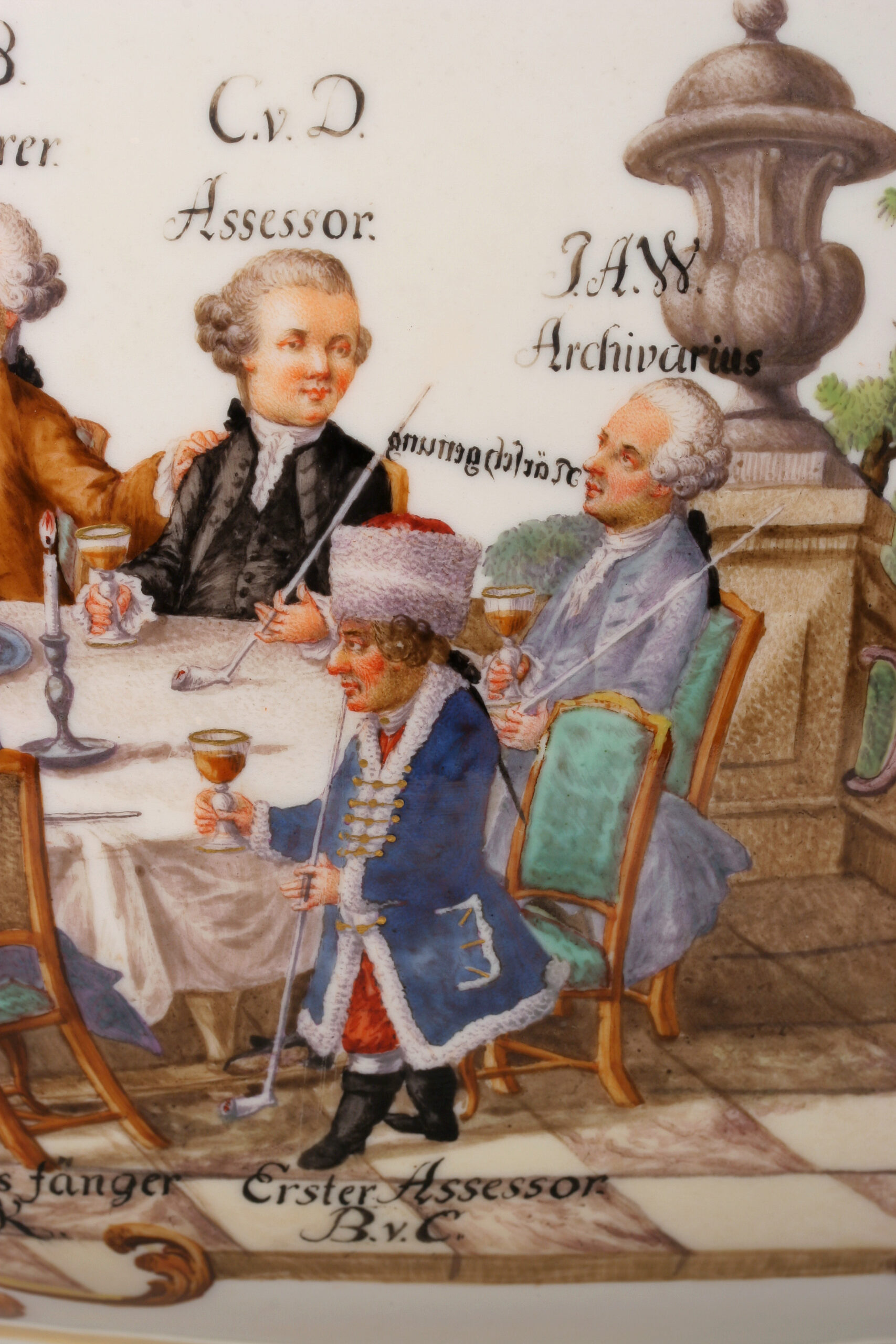 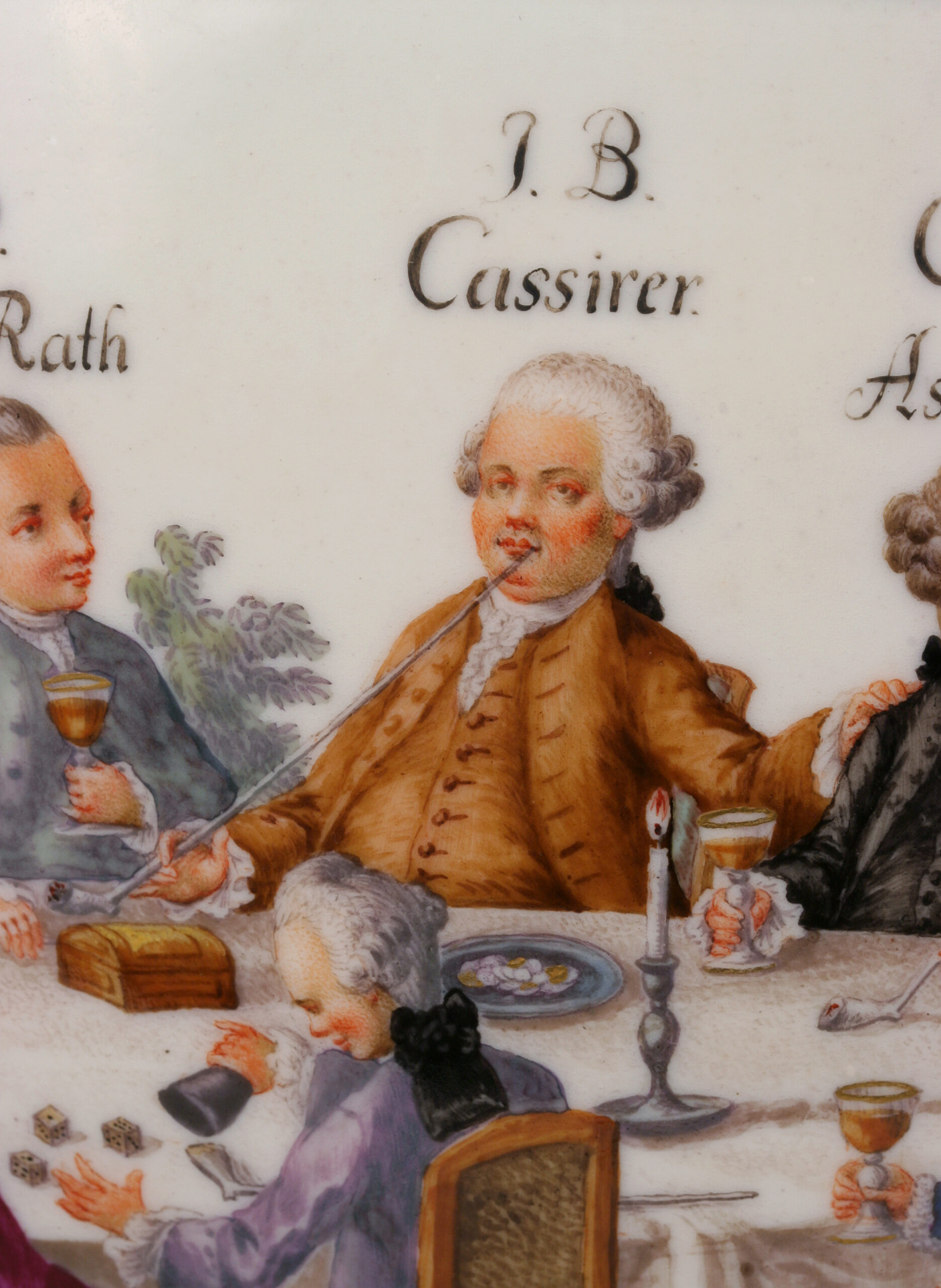 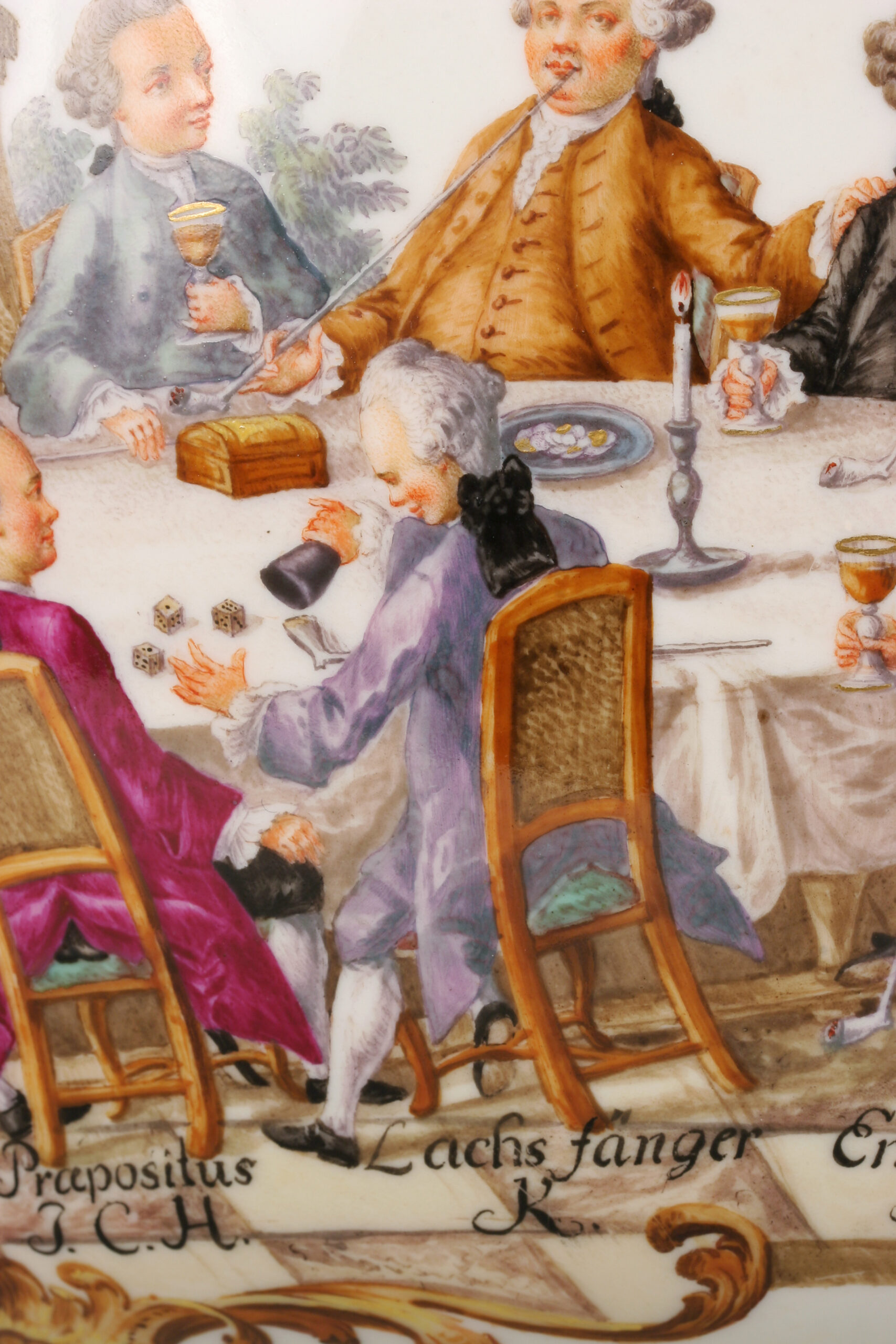 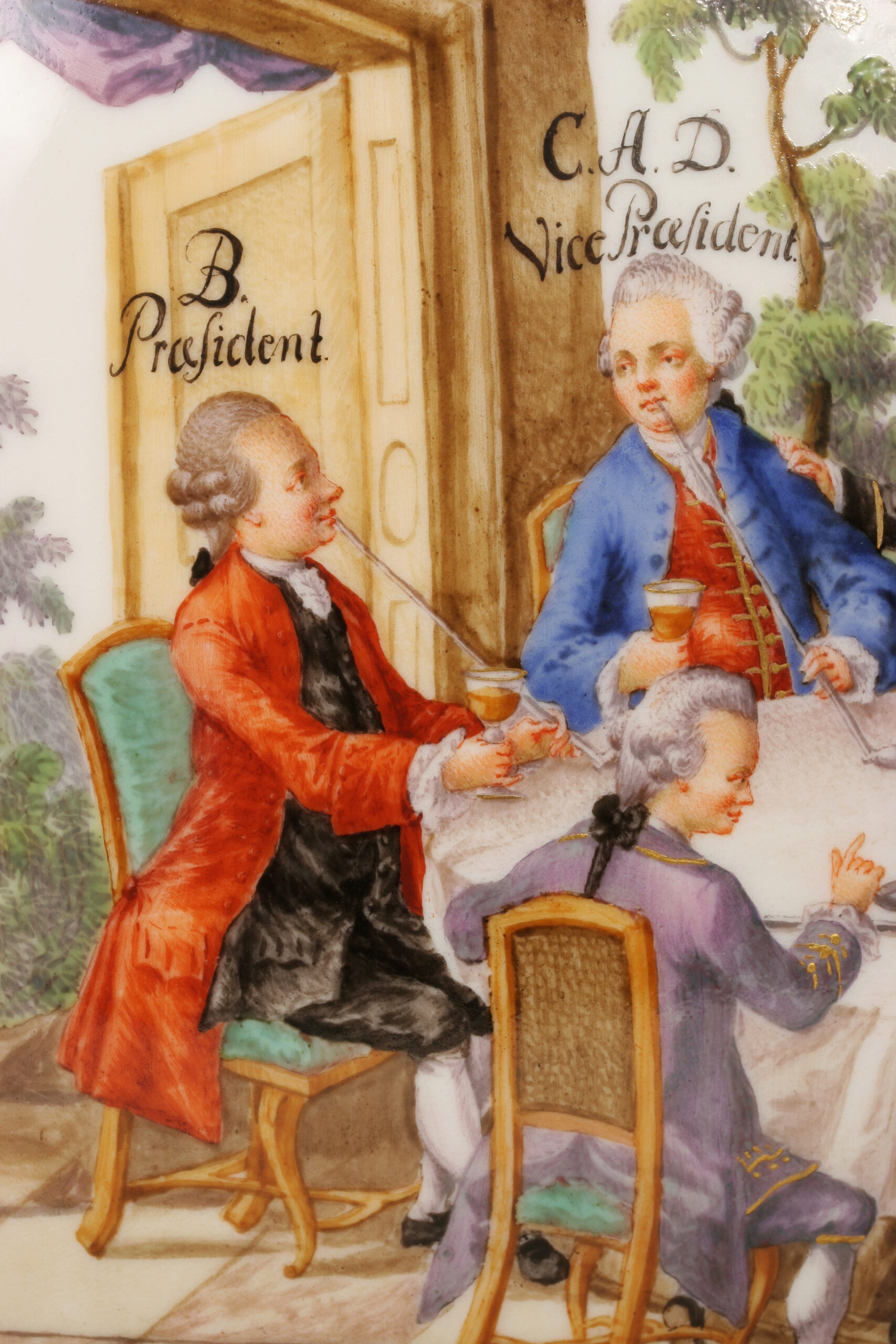 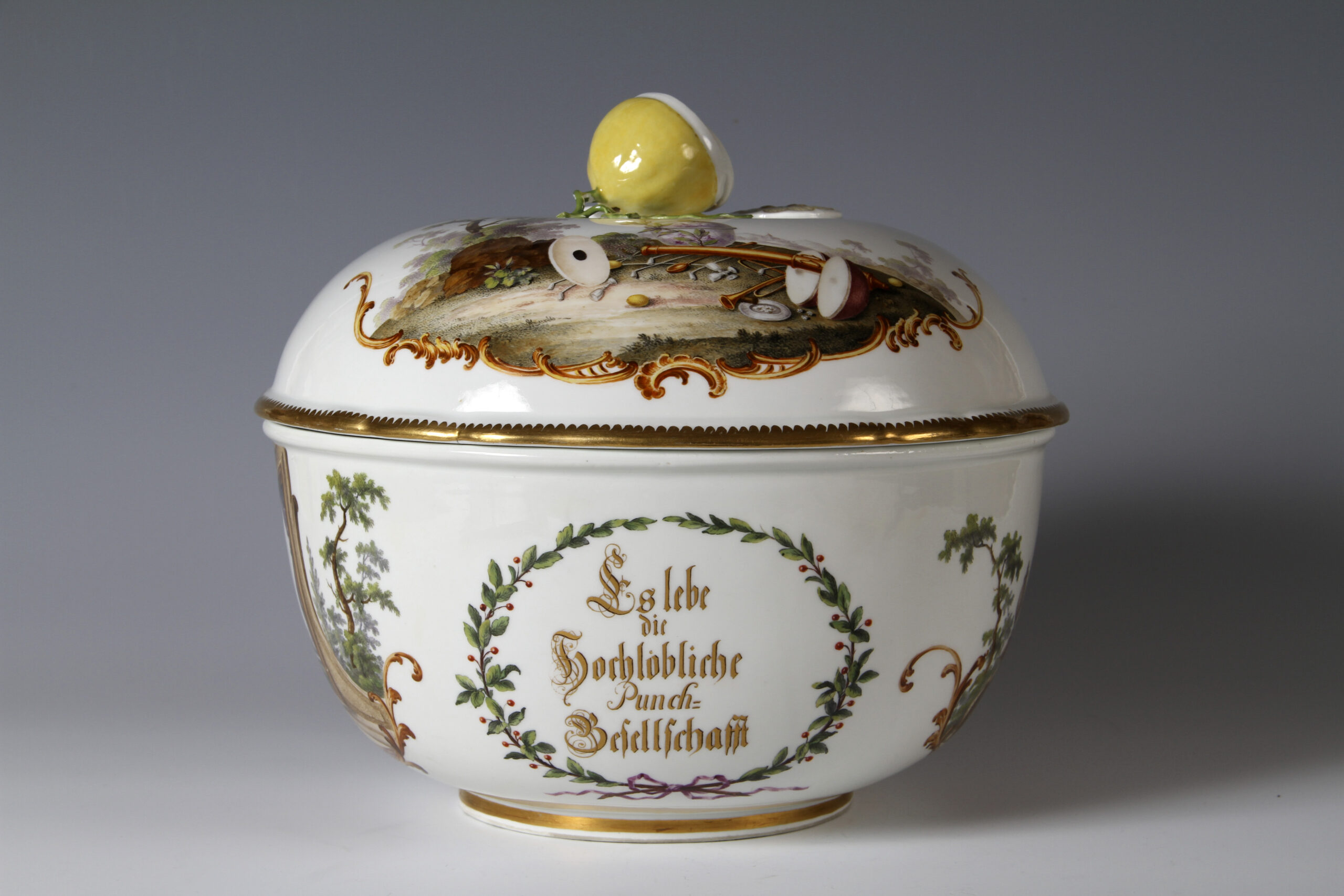 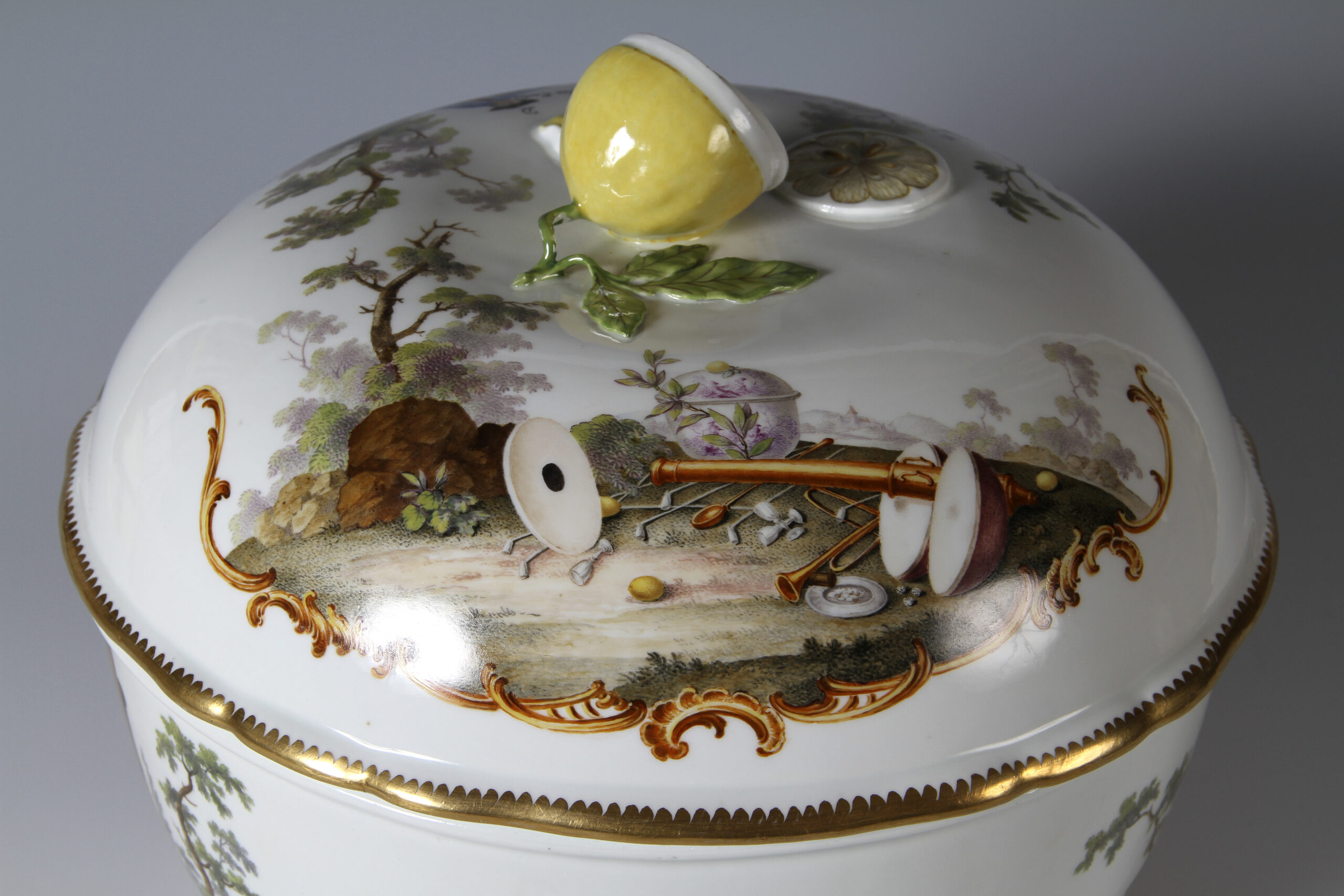 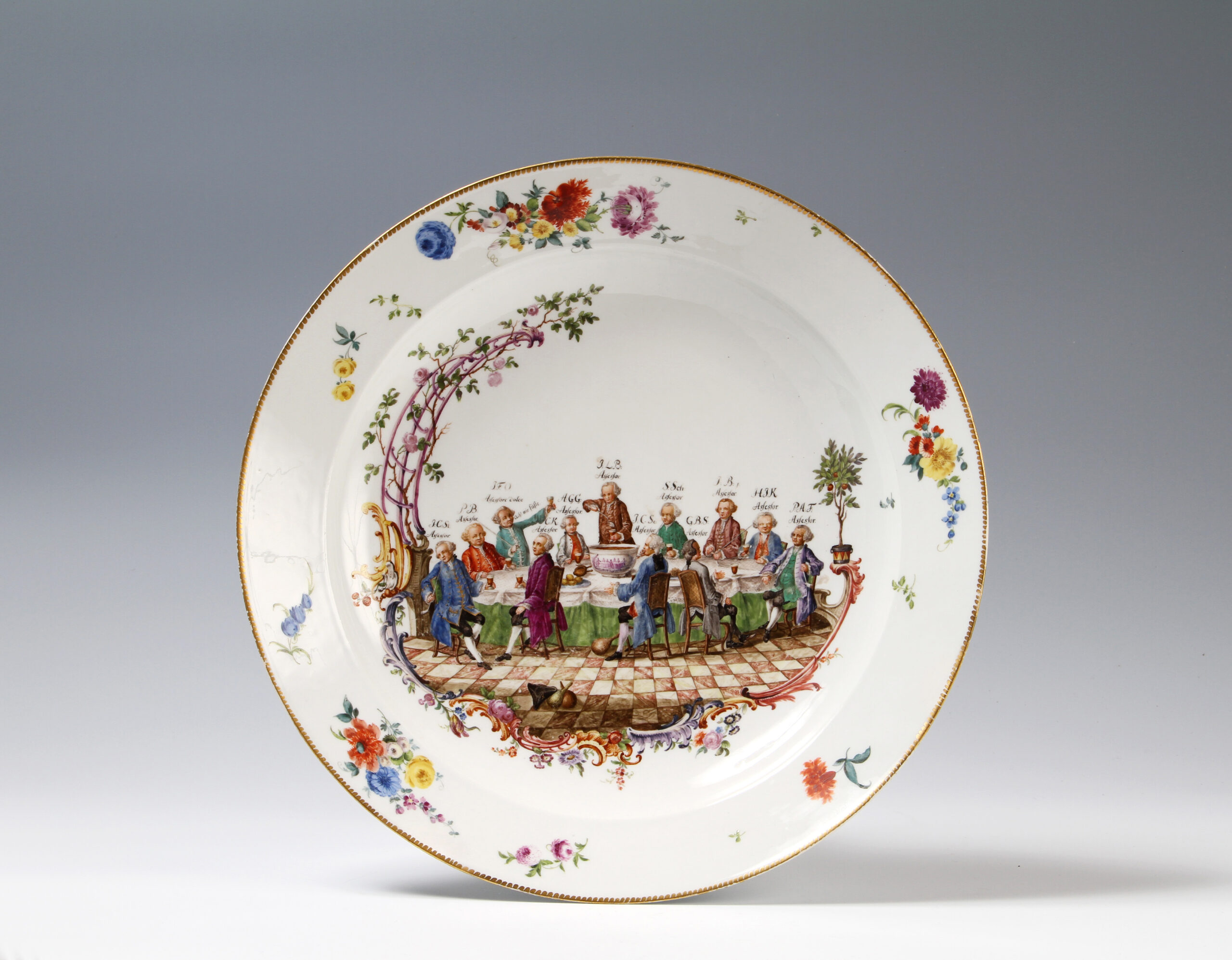 Germany in the 18th century had numerous Masonic, literary and political societies[1] both secret and overt. The Punch Society depicted here appears to beessentially of a convivial nature. The members are given their rank in full but identified only by their initials perhaps suggesting a degree of secrecy. The members are seated around the table on a terrace between open doors. At one end is the Praesident and Vice Praesident followed by other members of the Society. Most members are described as Assessor, a legal rank that was also given to a suitably qualified civil servant or mining official. Further down the table sits the Punch Rath (punch adviser), beside the Cassirer (treasurer), appropriately depicted in front of a plate of coins. The Erster Assessor (first assessor) is a dwarf dressed in a Hussar’s costume, which seems to have been a convention at this period[2]. Particularly significant is the Lachs fänger or salmon catcher who is given the single initial K and is shown having just thrown a six with the dice. He also appears on the cover where the sort of ‘salmon’ that he is after is revealed, salmon with its pink succulent flesh is most apt, Graf von S. is looking on. The other scene on the cover has unmistakable phallic connotations amongst references to drinking smoking and gambling. The Archivarius (archivist) has the word Närschgenung emanating from his mouth in mirror writing, which loosely translates as ‘foolish enough’ in Saxon dialect, An alternative and perhaps more convincing interpretation is that this word is ‘Märschgenung’ meaning ‘enough marching’ which would certainly be a popular anti-war sentiment in the aftermath of the Seven Years War. A servant is bringing in another punch bowl from the right.

A punch bowl does not normally have a stand so the dish although clearly made for the same society was intended to stand alone, differences in the scrolls and the floral sprays suggest that it was not made at precisely the same time as the bowl. A possible explanation is that the dish was made shortly after the bowl to include new or junior members of the society, amongst the assessors on the dish is J.B.j, the j indicating jünger, perhaps the son of the Cassirer, J.B. On the table one can see lemons, a lemon squeezer and what appears to be tobacco, which clearly plays an important part in the meetings of the society. One member raises his glass saying ‘Ach! Wie süβe’ (Oh! How sweet), why his title should be given as Assessore dolce remains a mystery.

A number of Meissen punch bowls exist that are decorated with satirical scenes after Hogarth engravings[3], however this appears to be the only recorded example that depicts an actual society. The society shown includes only a small number of members that are identified as being aristocratic by the prefix von whilst most have no such title. Since only a society of considerable wealth would have been able to commission such a bowl this might reflect the rise to prominence of a wealthy merchant or bourgeois class after the Seven Years War in the Saxon cities such as Leipzig or Chemnitz at a time when the Saxon court was in economic disarray and ordering few commissions.

We think that it is probable that this bowl depicts the Öconomischen Societät to Leipzig (Leipzig Economic Society).  It is striking that some of the initials correlate to known members. This Society was founded in May 1764 as a private association of state officials, merchants, landowners, farmers and artisans. At its inception, the
company had 31 regular members, there are thirty different people depicted on our bowl and dish combined. It is possible that our bowl was commissioned on an anniversary of the founding when some names had changed or that pseudonyms were sometimes used.

Condition:
The punch bowl and cover are in excellent condition; some minute flaking to the green enamel of the twig attached to the lemon finial.

The dish has two large chips (thumbnail size) on the rim that have been restored, also there is an area of rubbing to the enamels where the bowl has been placed on it that has been touched in.

This lot was in the section from “aus deutschem Adelsbesitz”.

Acquired by the Museum of Fine Arts, Houston, USA