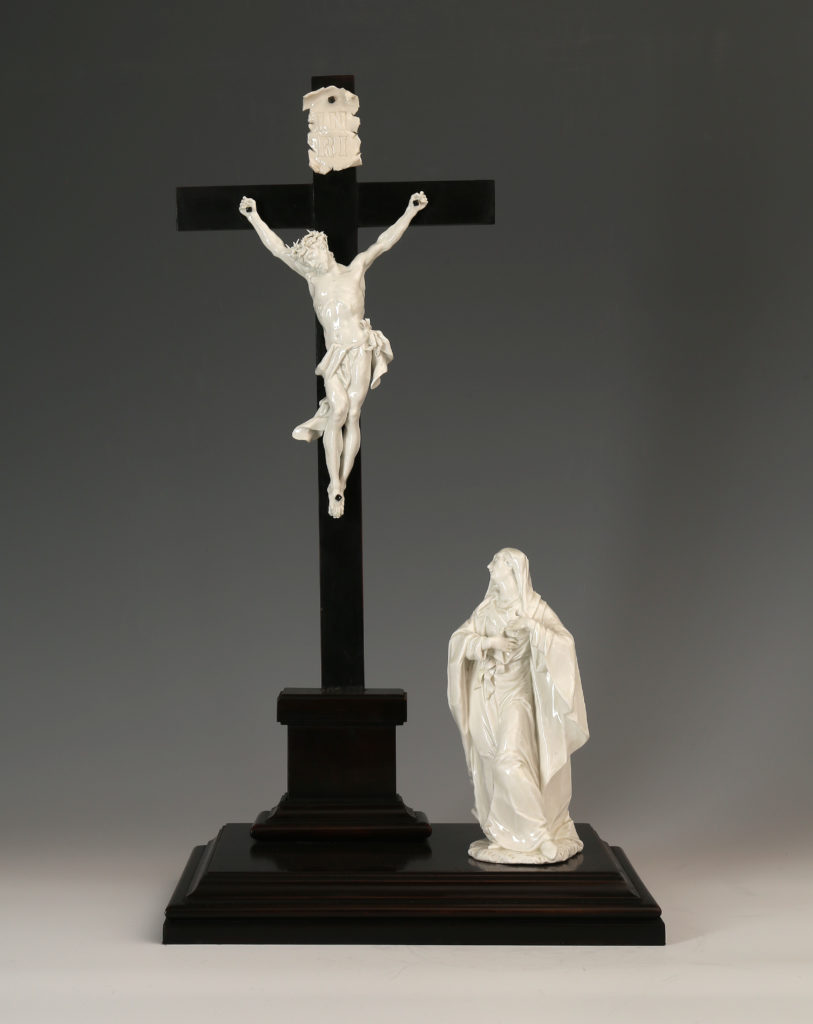 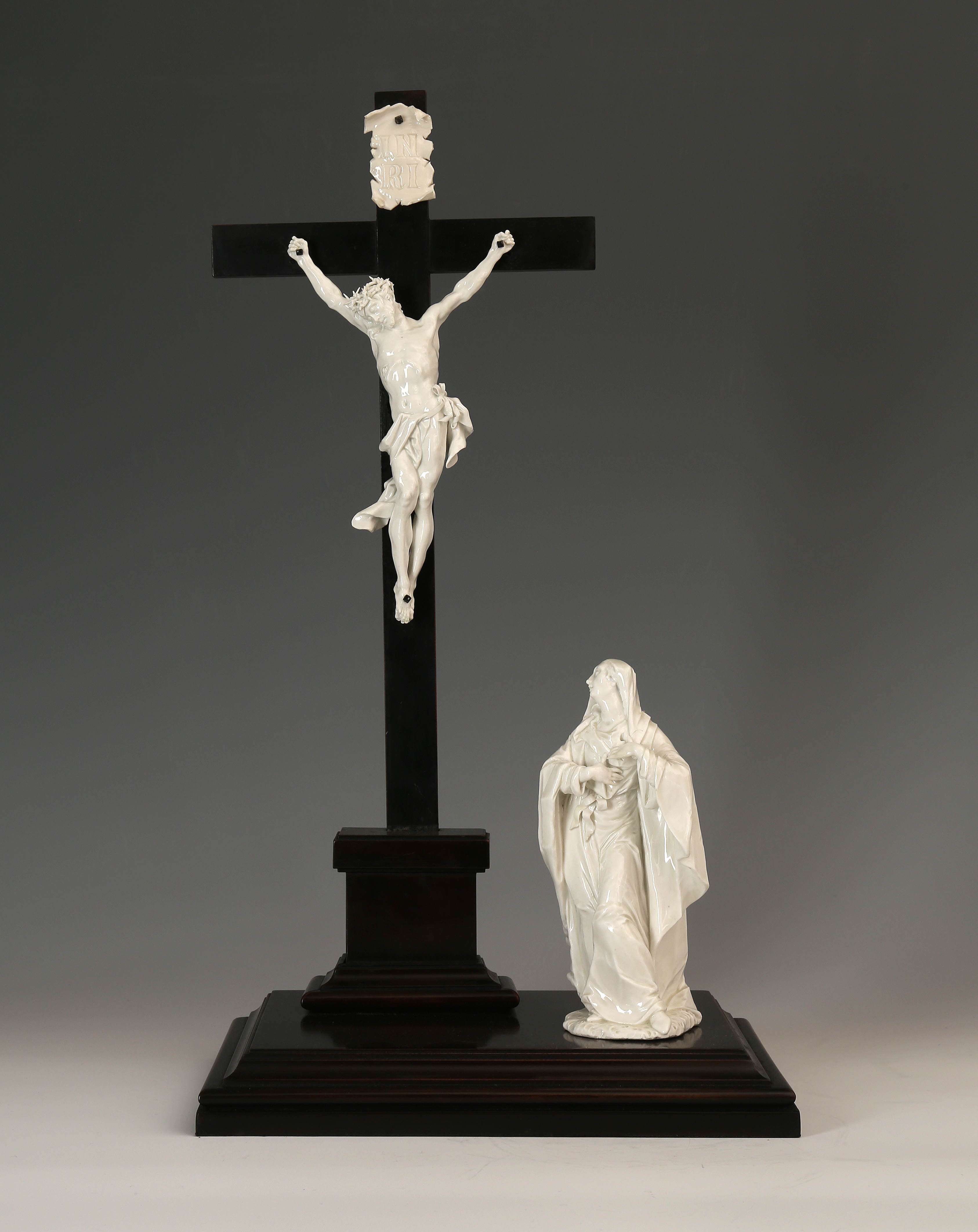 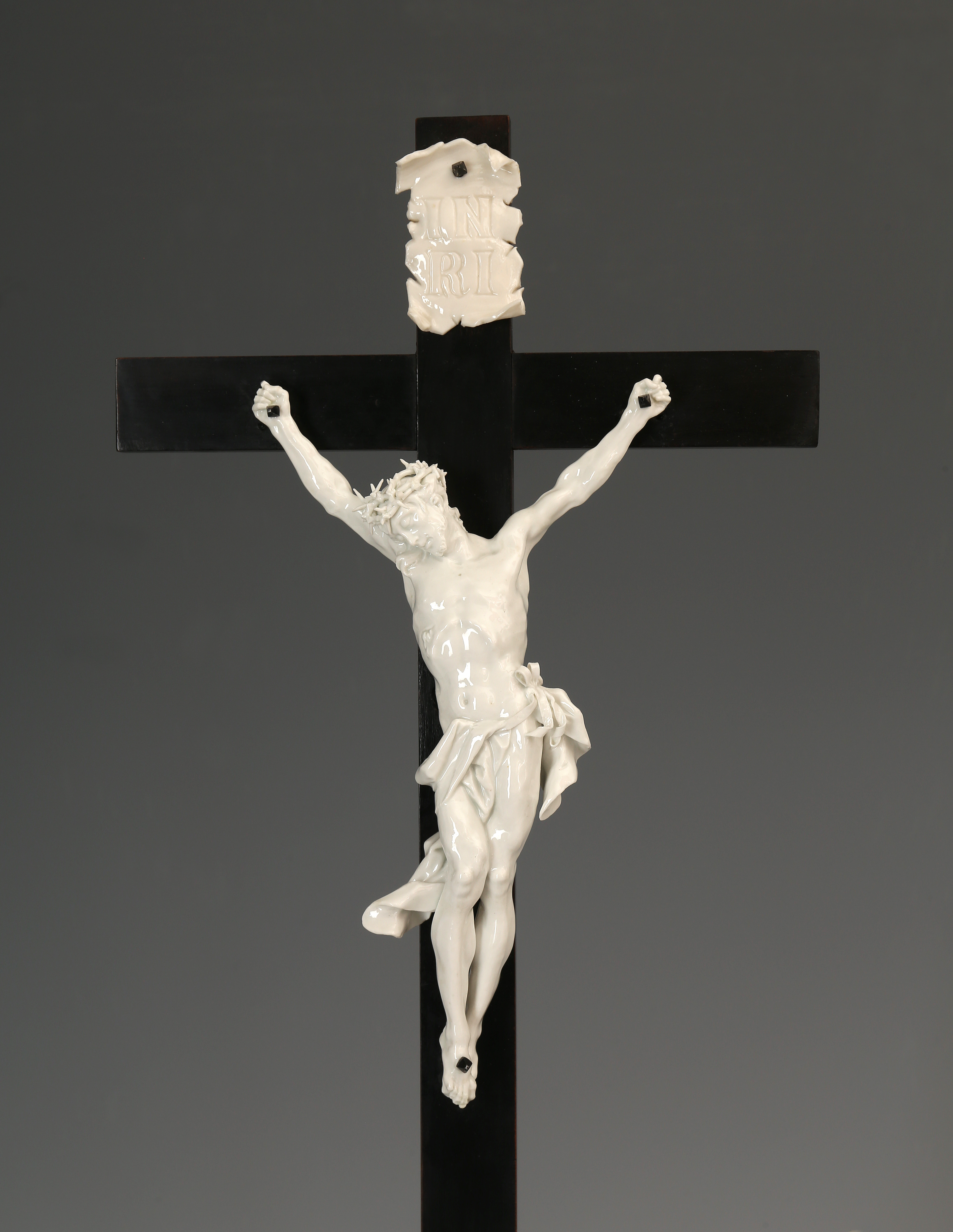 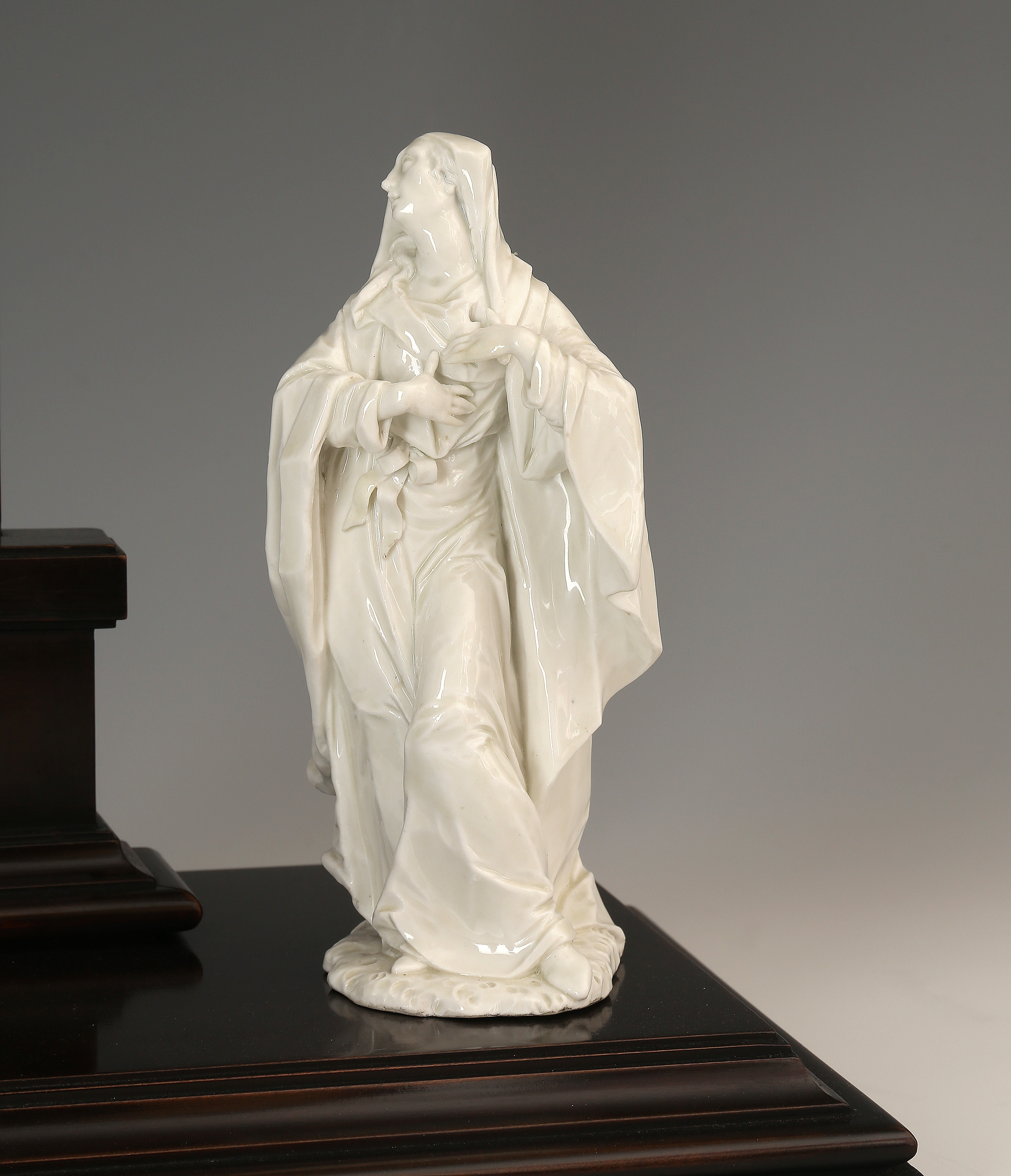 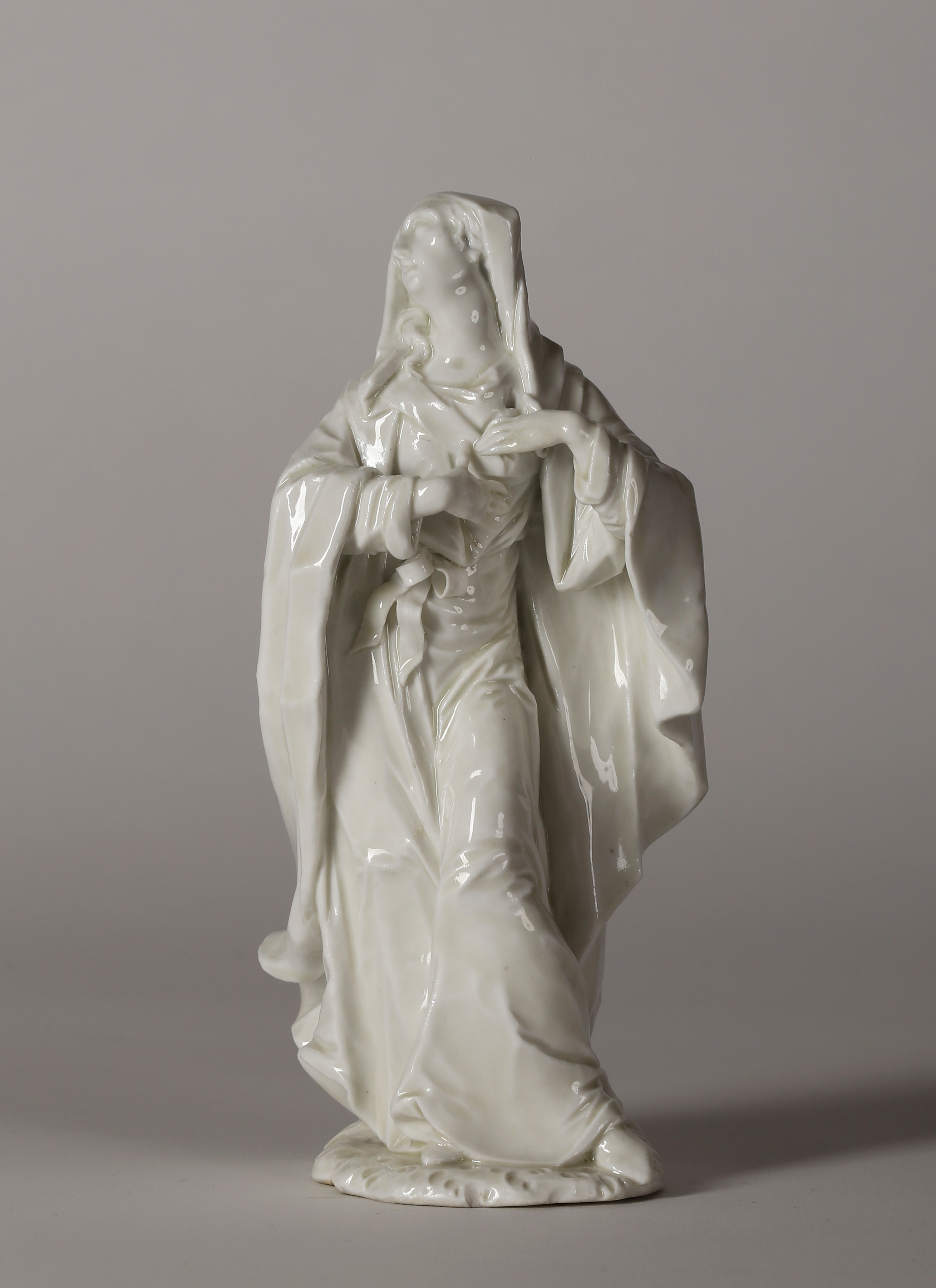 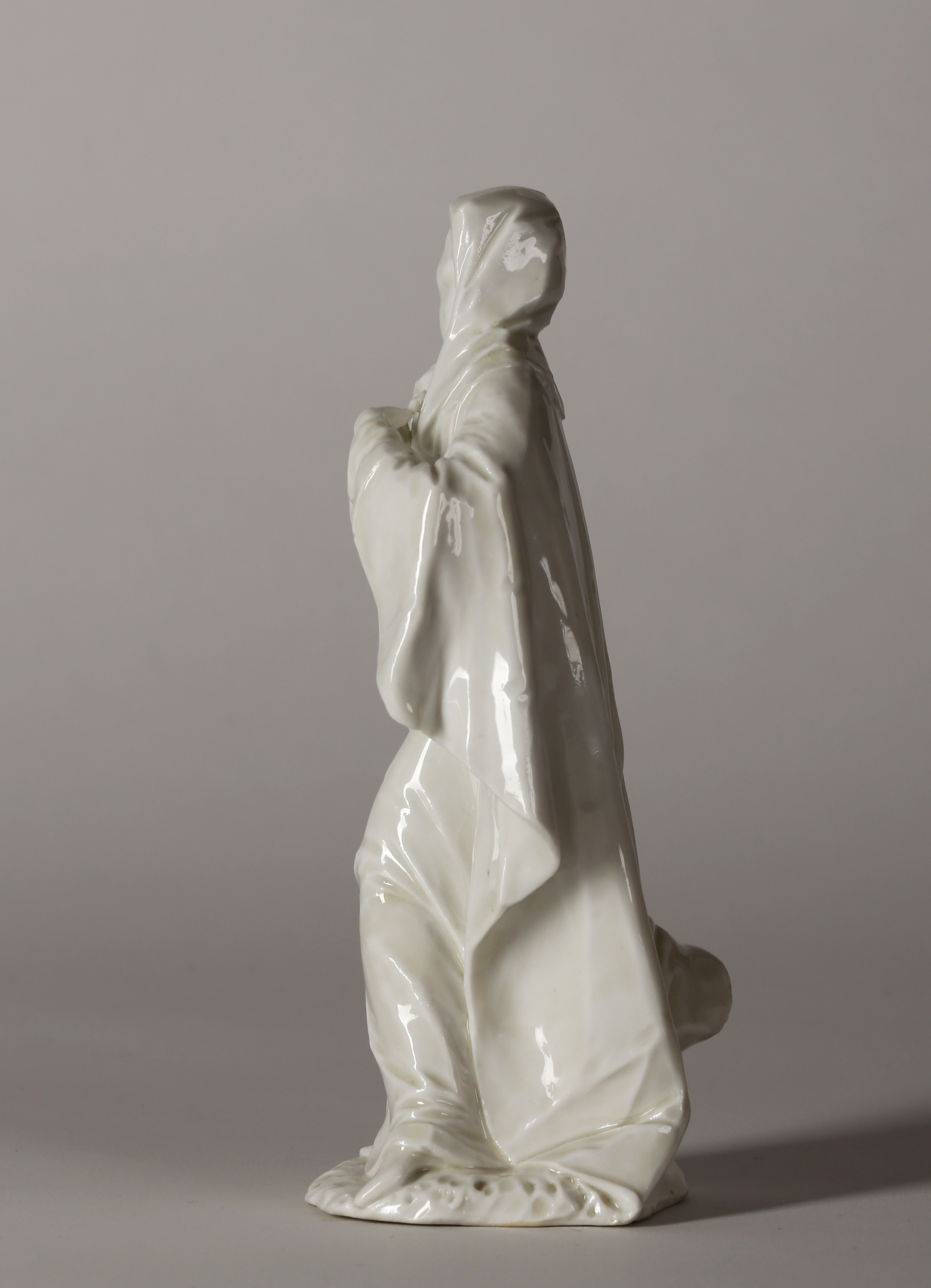 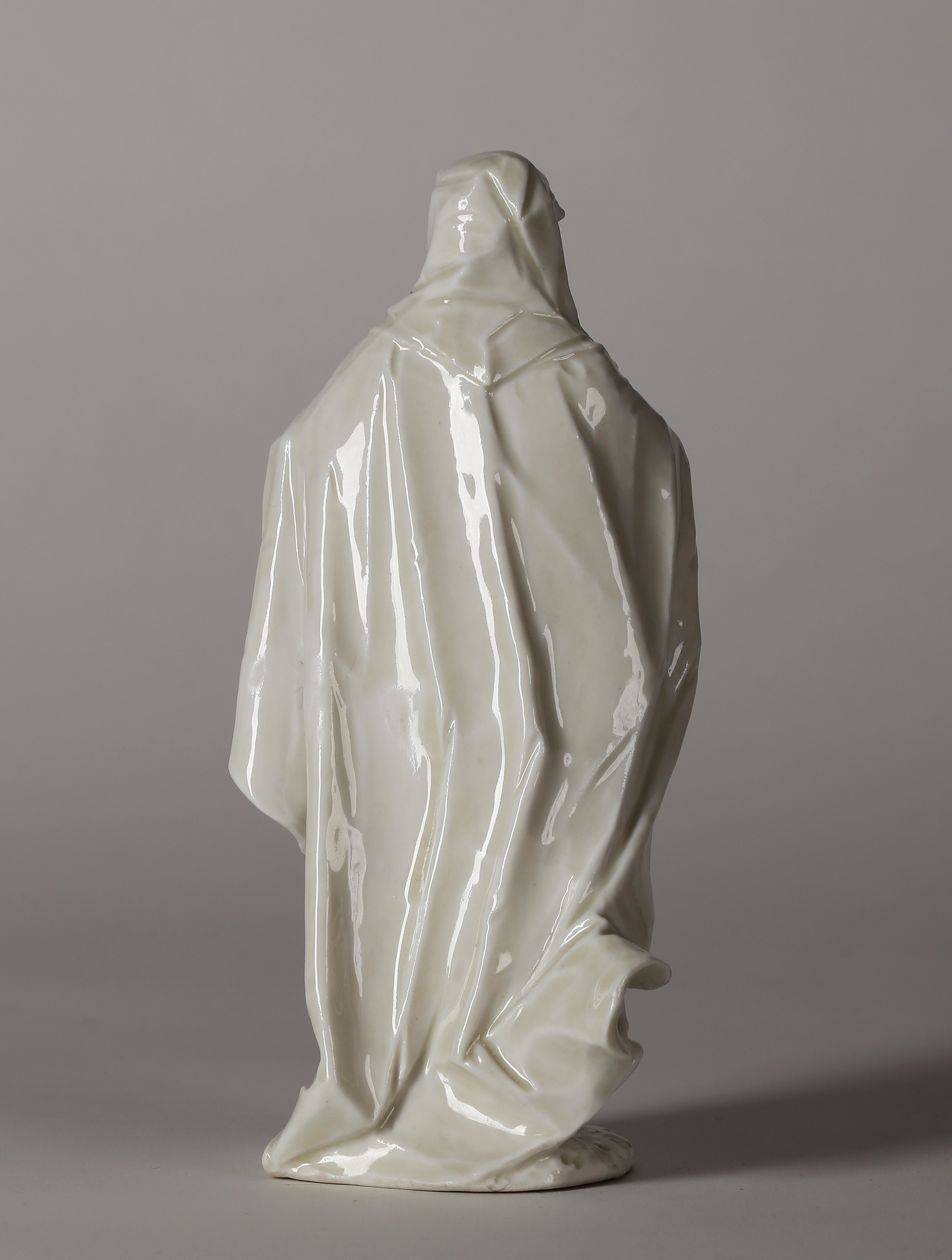 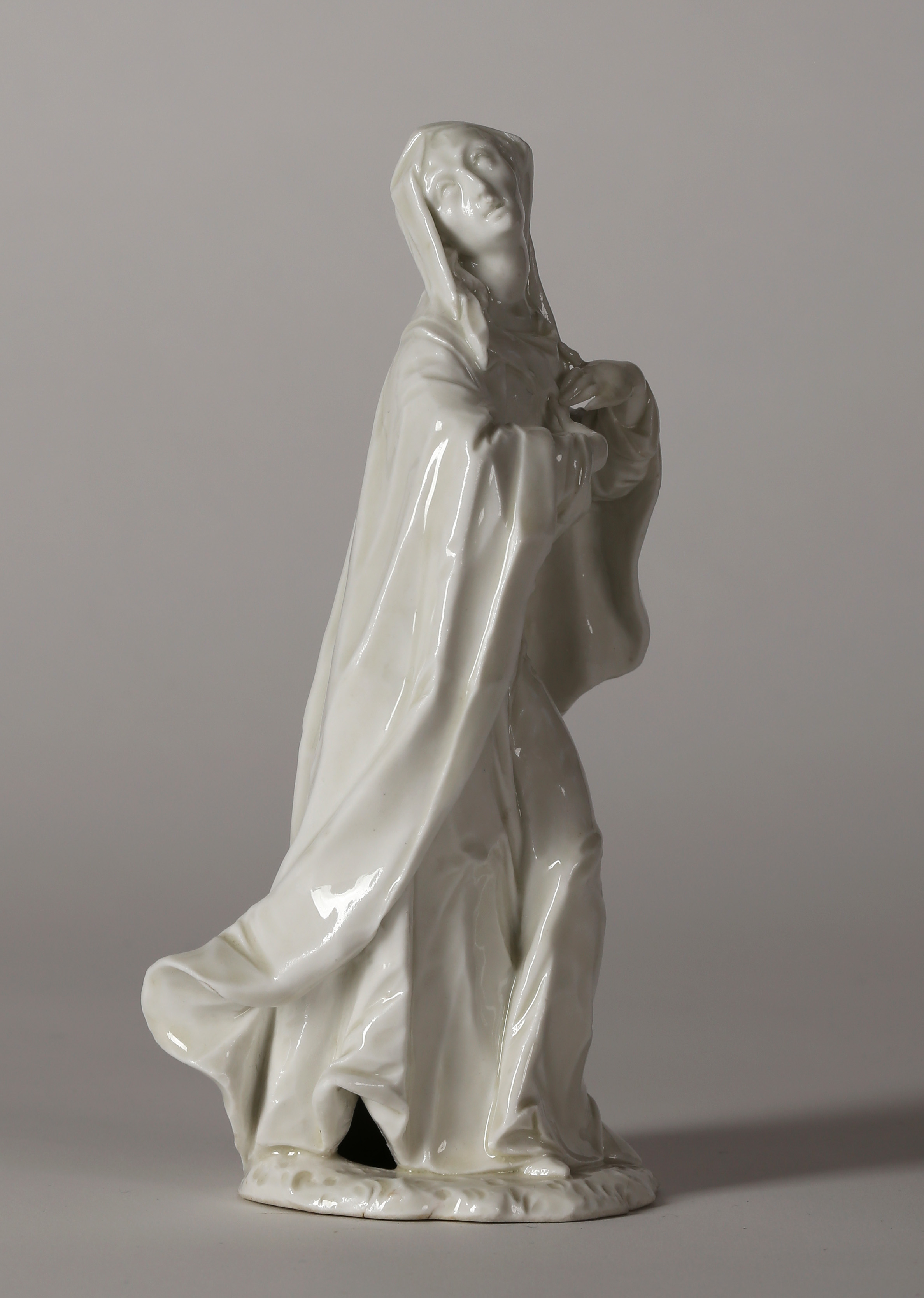 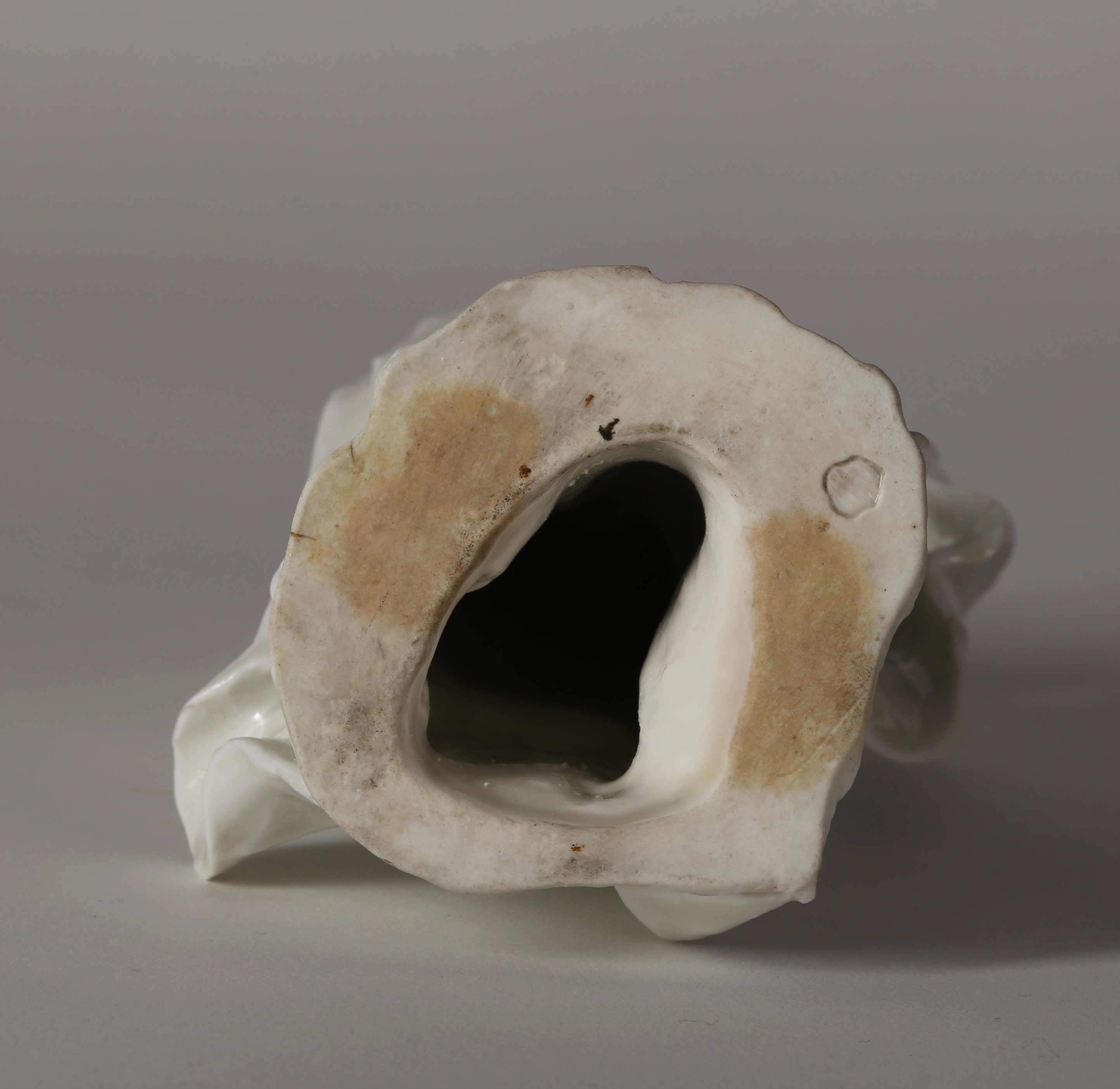 This rare and complete Crucifixion group by the celebrated modeller Franz Anton Bustelli demonstrates his ability to present pain and grief through gesture, dramatic gaze and movement. It captures the crucified Christ just moments after his death, as he is observed by his mother, the Virgin Mary, as Mater Dolorosa (Our Lady of Sorrows). Her anguish is palpable, as she strains her neck to look back at the dead figure, while reaching to her chest to grasp a sword plunged into the folds of her robes, a reference to the Sword of the Seven Wounds, representing the sorrows she has had to suffer.

In painful detail, the body of Christ reveals the wounds he has suffered on the cross. His attenuated torso hangs from two nails inserted just below his palms, while his knees buckle under his weight against his crossed feet pierced by a third nail. The muscles have begun to relax and his hands are tightly clenched. His lifeless head with closed eyes, under its crown of thorns, is turned away from his mother. The open wound on his side records the piercing of a soldier’s lance in order to prove to the crowd that he was dead. A rope secures the knife–edged loincloth folded and billowing in a diagonal fashion to exaggerate the curve of his body. The Corpus is attached to the 18th century ebonized two–beam crucifix by contemporary nails, also used to secure a porcelain plaque imitating scrolled parchment, with impressed letters forming the acronym INRI representing the Latin inscription IESVS NAZARENVS REX IVDÆORVM (Jesus the Nazarene, King of the Jews).

The Kleines Kruzifix and figure of Mary were created by Bustelli, the Swiss–born sculptor, in 1758, and are first recorded as a group in 1760, in a list of factory models: “1 kleines Cruzifix, wobey 1 schmerzhaffte Muttergottes unter dem Creutz’.[1] The group (one of two versions) was intended for private devotion, presumably first commissioned by a prominent member of the Bavarian court, perhaps housed in a bespoke cabinet, such as the example now in the Legion of Honor Museum, San Francisco.[2] The earlier version is the Großer Kruzifix, created in 1755, which is accompanied by two figures, a different standing Virgin Mary, Stabat Mater, and Saint John the Baptist, both first modelled in 1756, as well as the same INRI plaque and sometimes a skull and crossed bones. It also forms a powerful composition, albeit triangular, yet there is far more immediacy in the two–figure group. In the larger group, the figure of Christ is not yet dead, but depicted suffering in his final hours, his eyes and mouth are open, his muscles are tense and there is still movement in his fingers.[3]

They were both made shortly after his arrival at the Nymphenburg porcelain factory in 1755, then located in Neudeck Castle, outside Munich. Already an experienced sculptor, though little is known of his career, he may have trained in the wood–carving workshop of the Bavarian court sculptor Johann Babtist Straub (1704–1784).[4] These five figures, considered amongst his finest and most sophisticated work, must have been intended to showcase his skills as a sculptor, even when working in a challenging new material, porcelain. The undecorated porcelain intensifies the sculptural, while strengthening the emotive effect of the groups, the few rare examples with painted decoration, as in the Bäuml Collection, lessens the impact, which is more decorative than spiritual.[5]

The porcelain exhibits the slightly smoky ivory hue of the earliest period of Neudeck-Nymphenburg and the tight glaze that allows for such exceptionally fine detail.

Condition:
Clean breaks through Christ’s wrists one arm and legs, losses to Crown of Thorns, Madonna with restoration to right hand and left fingers,
the ebonised wood cross and pedestal as well as most of the metal nails are original, the wooden base plate is later

[4] See the entry by Peter Volk in Eikelmann, Hantschmann and Ziffer, 2004