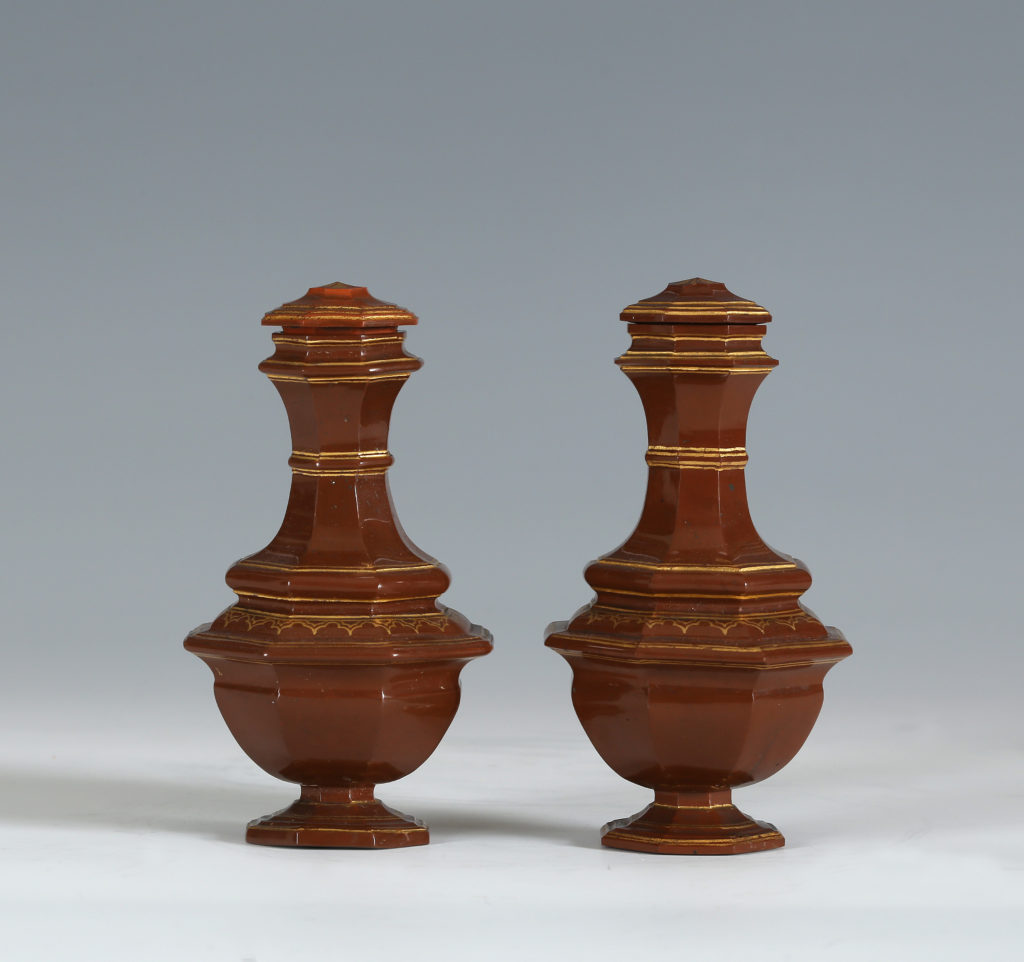 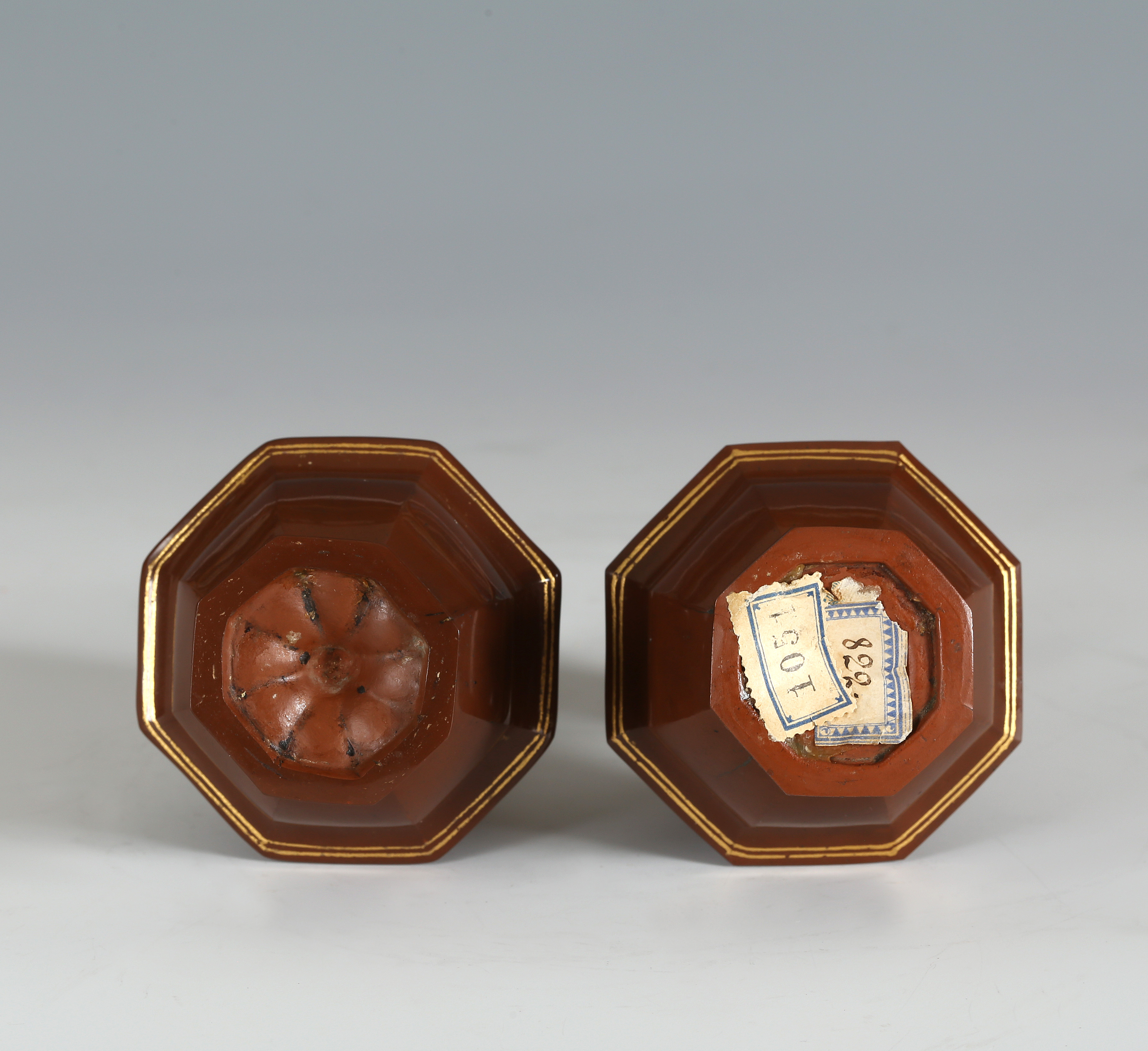 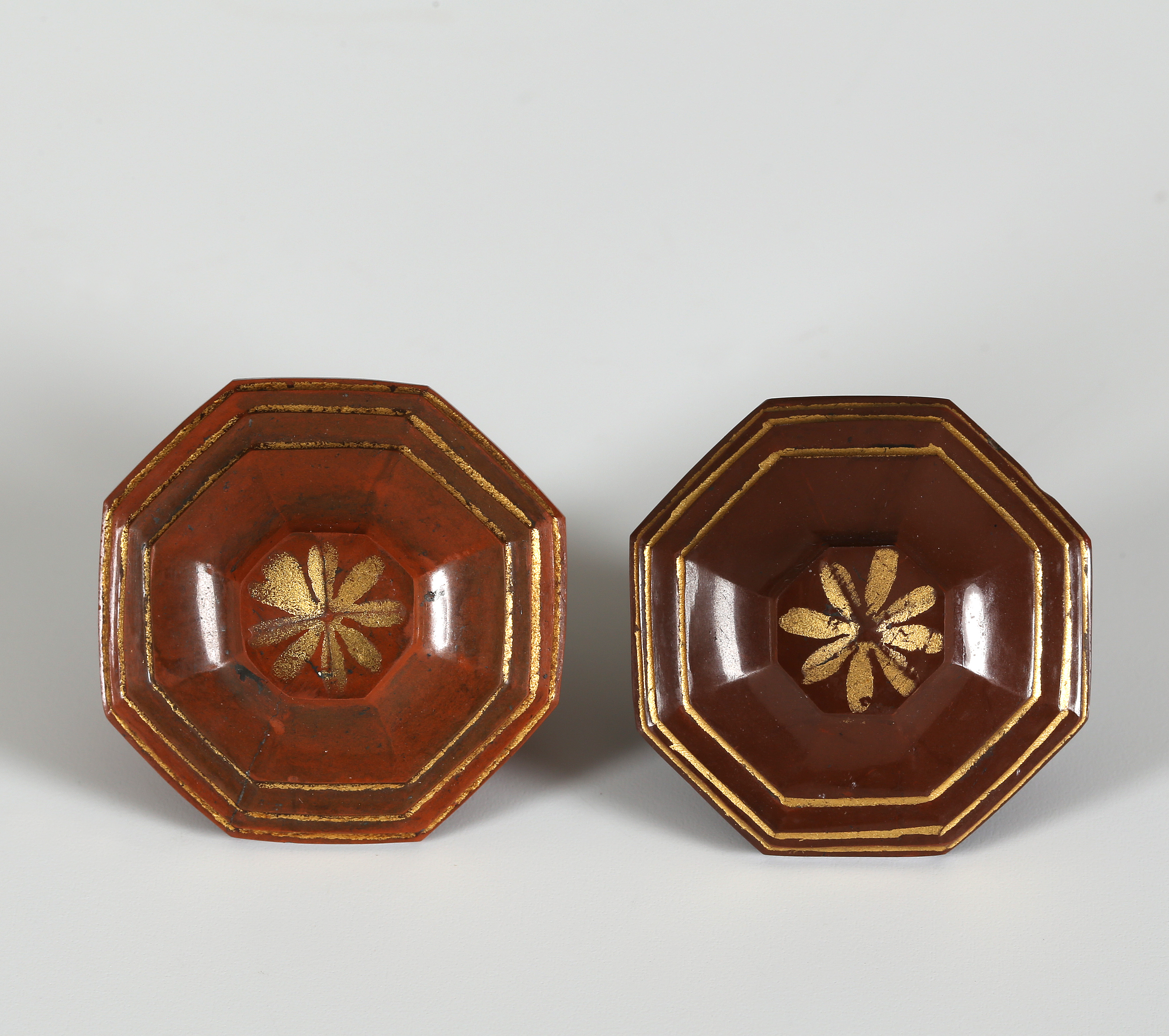 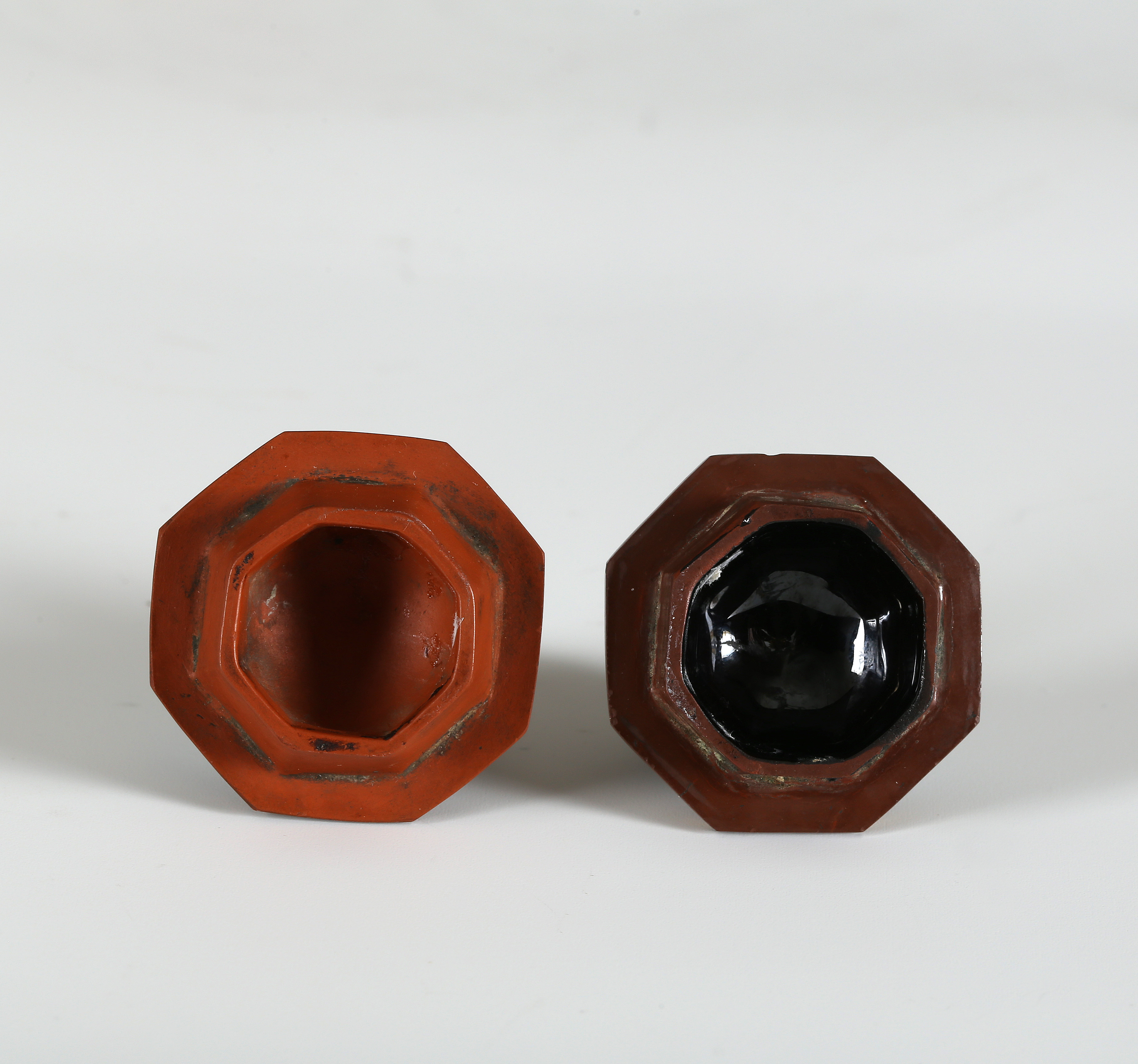 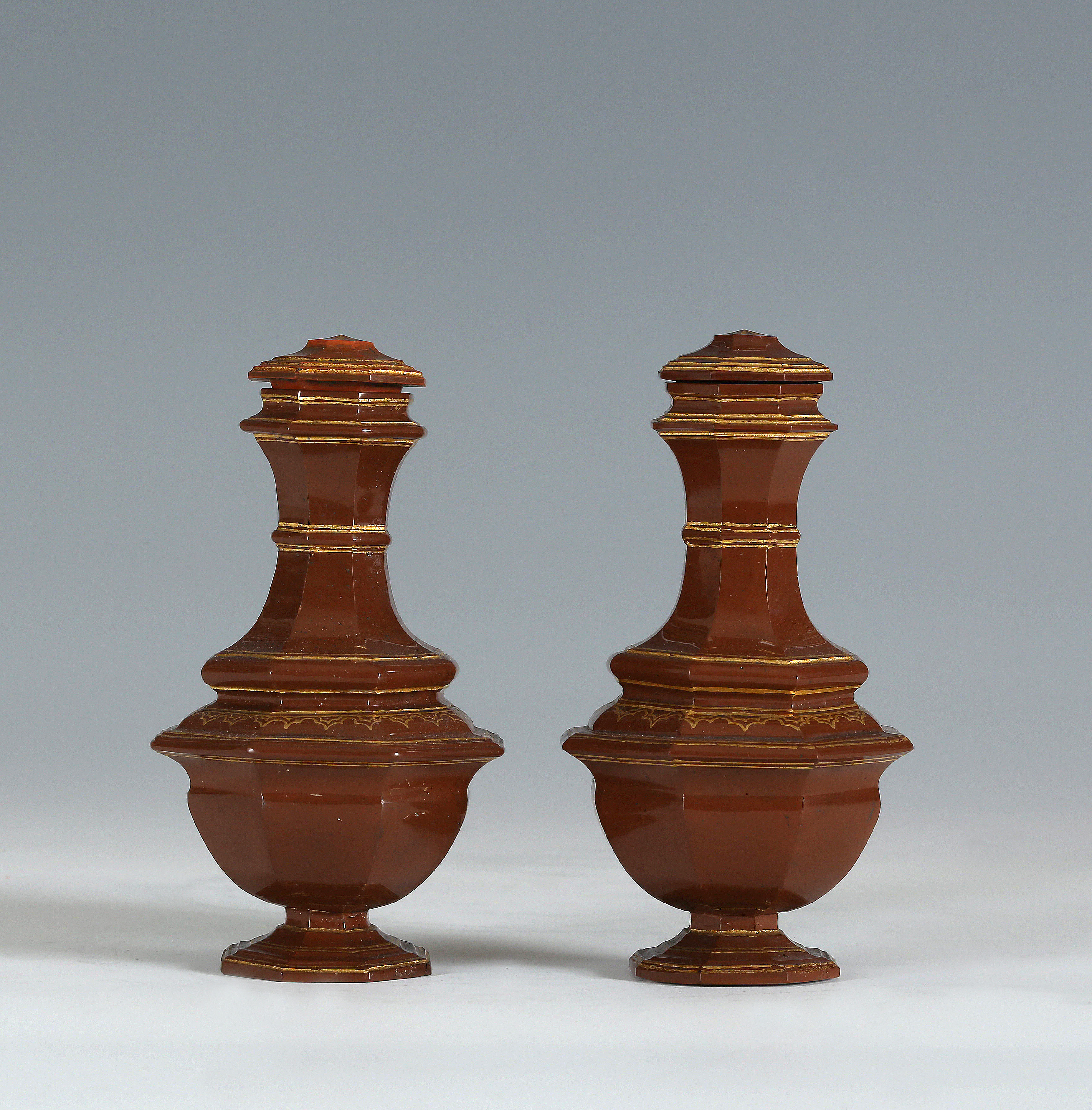 From the collections of the Grand Dukes of Baden, precision polished octagonal vases and covers with gilt double line and lambrequin borders, the inside of one cover with a black glaze. The elegant baroque form is likely to have been designed by the Dresden court silversmith Johann Jakob Irminger.

Very few pieces of Böttger stoneware are exhibited in the Grünes Gewölbe, or Green Vaults, the Ducal treasury in Dresden but a pair of similar vases are incorporated into the monumental ‘Obeliscus Augustalis’ of 1722, one of the most lavish creations of the court goldsmith Johann Melchior Dinglinger. 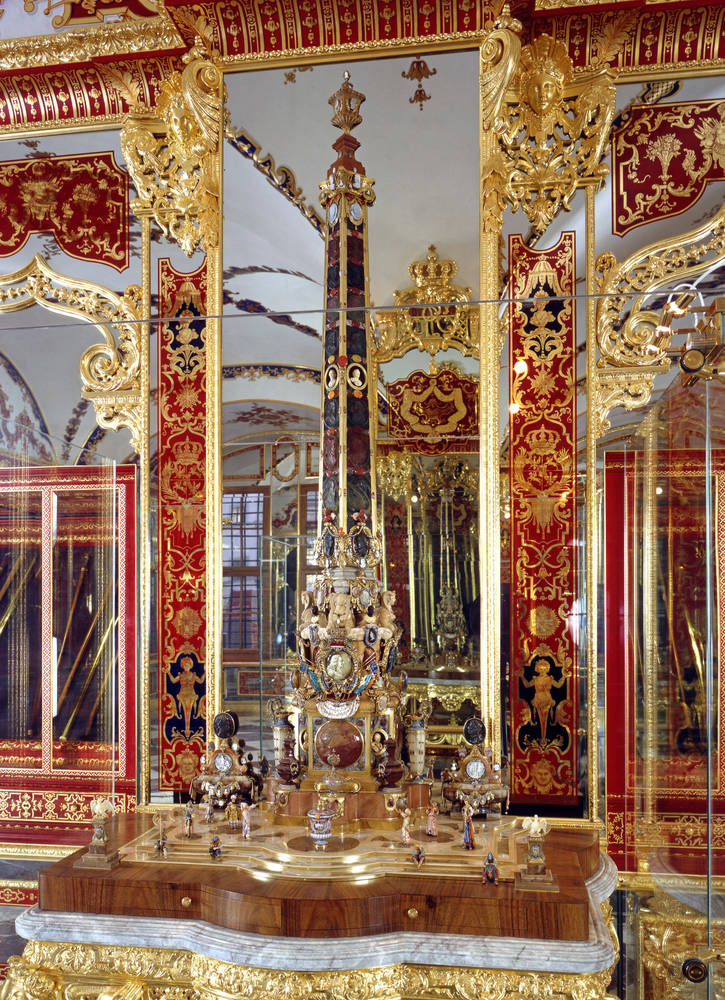 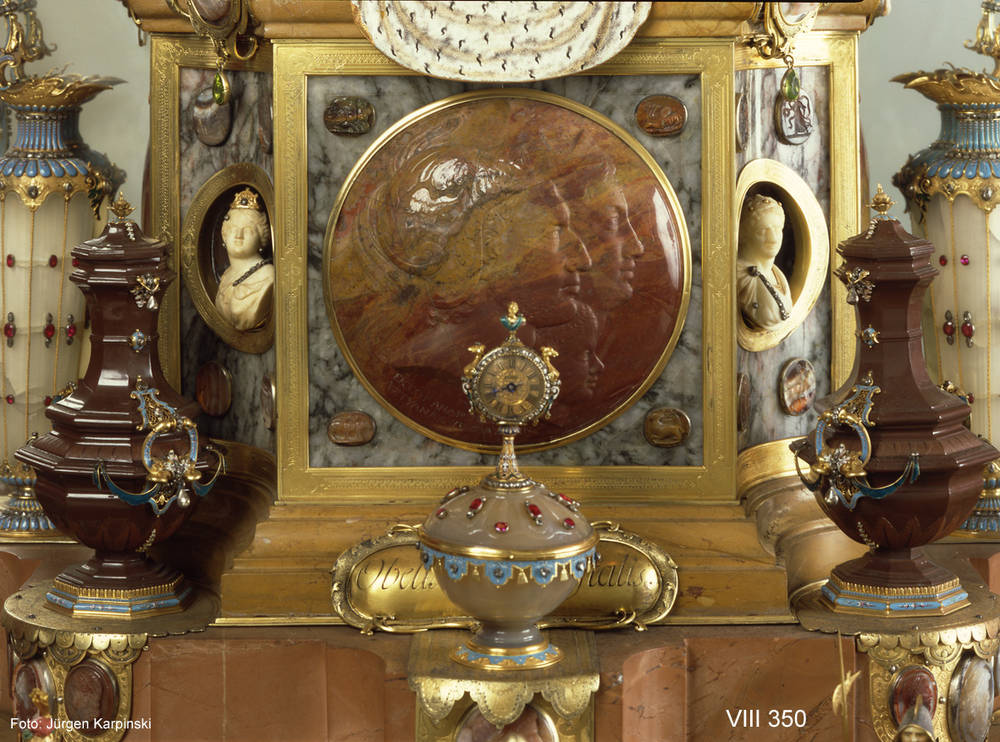 The group of early Meissen wares from the collections of the Grand Dukes of Baden had never been on the market until the historic sale in 1995. It was the most remarkable in living memory for their exceptional quality, untouched condition and their unbroken provenance back to the Margravine Karoline Luise of Baden-Durlach (1723-83) who is likely to have inherited many of them from Margravine Sibylla Augusta of Baden-Baden (1675-1733), a close friend of Augustus the Strong of Poland and Saxony.

Sebastian Kuhn who catalogued these vase when they were first sold from the Collections of the Margraves and Grand Dukes of Baden by Sotheby’s Baden-Baden, on 18 October 1995, and also subsequently when sold by Bonhams, London, relates their history as such:

‘These flasks belonged to an extensive group of polished Böttger stoneware embellished in gilding that was inherited by the Margravine Karoline Luise of Baden-Durlach (1723-83) in the second half of the 18th century. She displayed most of the historic porcelain that she inherited from various members of her and her husband’s families as part of a scientific display in the Naturalia Cabinet in the Karlsruhe Residence. The Böttger stoneware, along with much of the porcelain collection, is listed in her posthumous inventory, which is repeated in that of her son, Karl Ludwig von Baden-Durlach (1755-1801). In the inventory, and probably also in the display of the Naturalia Cabinet, these vases were grouped together with other similar, but apparently unrelated, polished Böttger stoneware with gilt rims, including three teapots, five tea bowls and six saucers, three octagonal teapots and two oval flasks (Verlassenschaft des Erbprinzen Karl Ludwig von Baden-Durlach, 1805-09, Generallandesarchiv Karlsruhe (GLA) FA 6 Person 12 II: ‘das Naturalien Cabinett: Fein irdenes Geschirr [p. 102, no. 597] Eine Garnitur von feiner brauner Erde, glasirt mit Vergoldung, bestehend in: […] 2 achteckichten Caraffen mit Deckeln […]‘ [the Naturalia Cabinet: fine earthenware: a garniture of fine brown earth, glazed with gilding, consisting of (…) 2 octagonal carafes and covers (…)]. The Böttger stoneware may originally have been in the collection of the Margravine Sibylla Augusta of Baden-Baden (1675-1733), who assembled an important collection of Chinese and European ceramics, including early Meissen stoneware and porcelain, in Schloss Favorite, that was inherited by Karoline Luise in 1771. However, Karoline Luise also inherited early Meissen stoneware and porcelain from other members of her husband’s family, as well as from her own grandparents.

These flasks, together with the rest of the ‘garniture’, were exhibited from 1879 in the same rooms in the Grand Ducal Residence in Karlsruhe that had contained the Naturalia Cabinet and they are listed in the inventory of 1883 by Karl Koelitz. When the last Grand Duke of Baden abdicated in 1918, this collection was considered the family’s private property and, in 1919, it was moved to the Neues Schloss, Baden-Baden, where – from around 1960 it was on public display as part of the Zähringer Museum. Other parts of the same group, now in the collection of the Staatliche Schlösser und Gärten Baden-Württemberg, Schloss Favorite (inv. nos. G7573, 7577, 7580-81) are published by U. Grimm / U. Wiese, Was Bleibt (1996), pp. 52ff. A teabowl and saucer in the Arnhold Collection, New York, published by M. Cassidy-Geiger, The Arnhold Collection of Meissen Porcelain 1710-50 (2008), no. 63.

Condition:
Perfect condition with the gilding exceptionally well preserved. The cover balance a little awkwardly but are of the exact same colour and finish and have been together since the earliest inventories.

These items have been sold