A RHENISH BARTMANNSKRUG WITH THE COAT OF ARMS OF ELIZABETH I 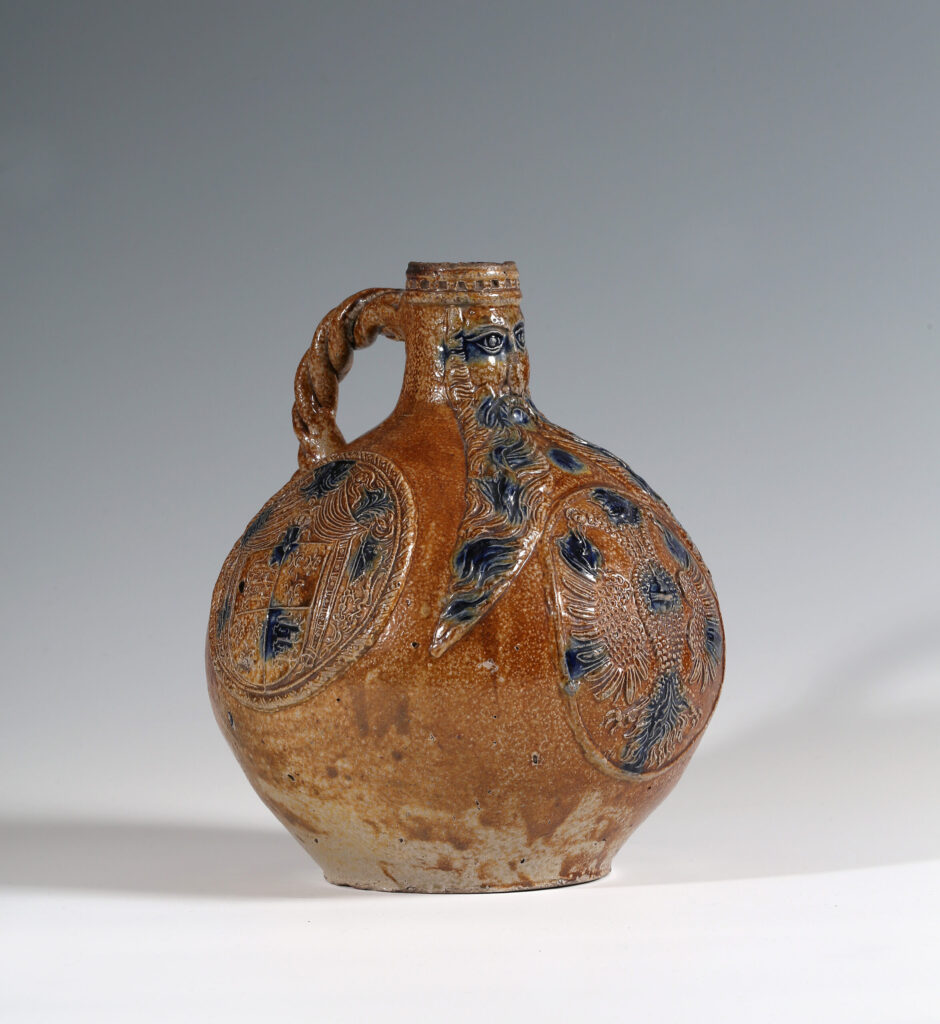 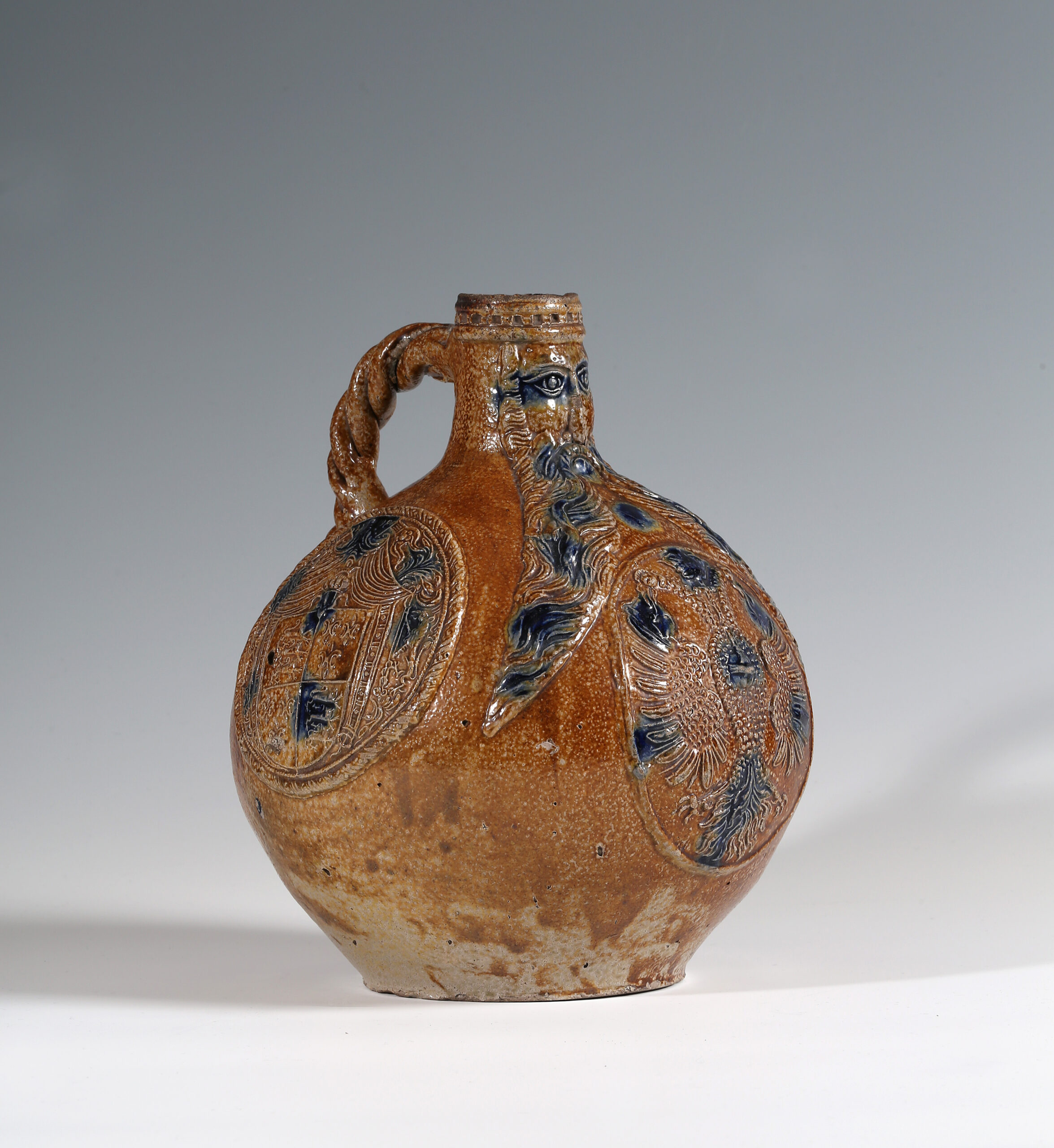 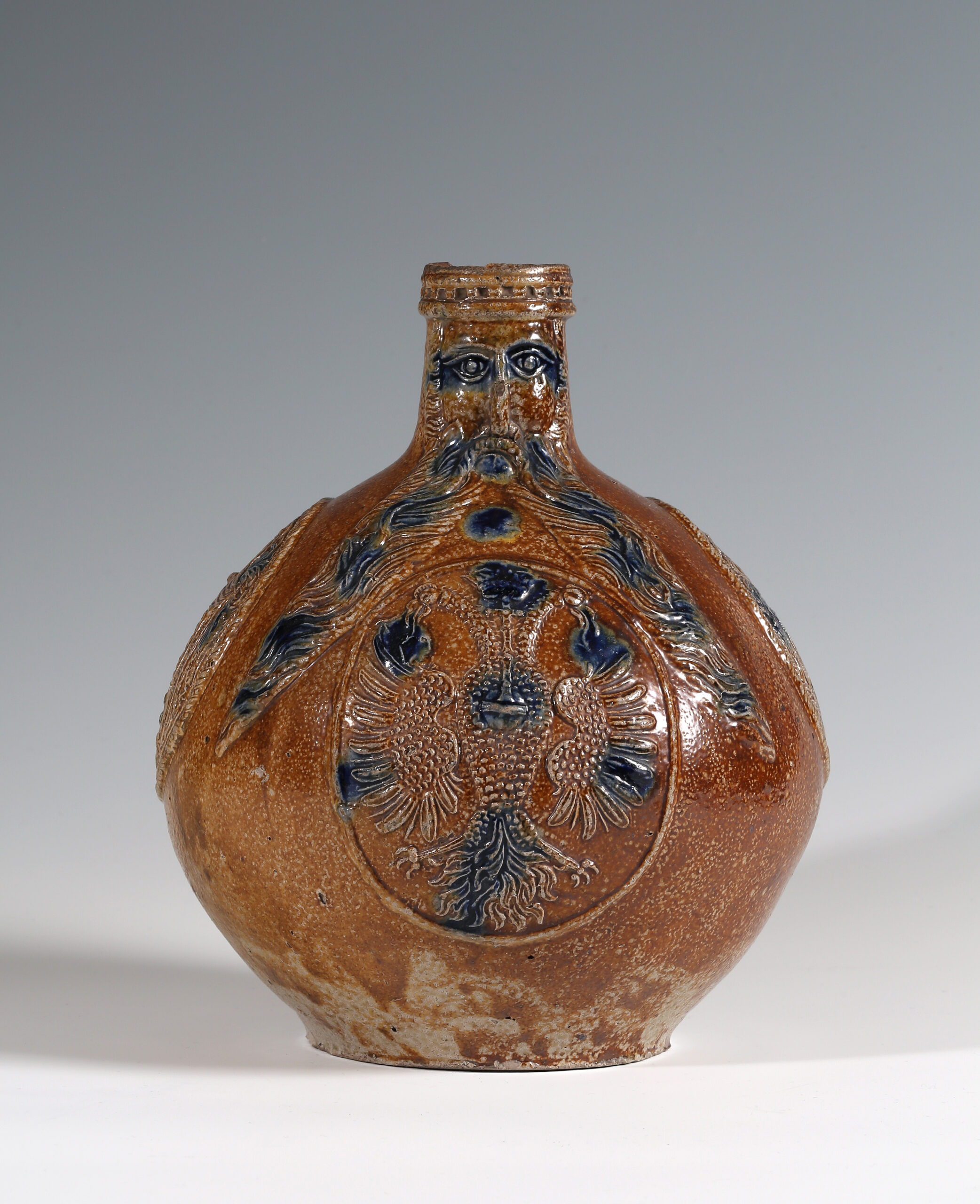 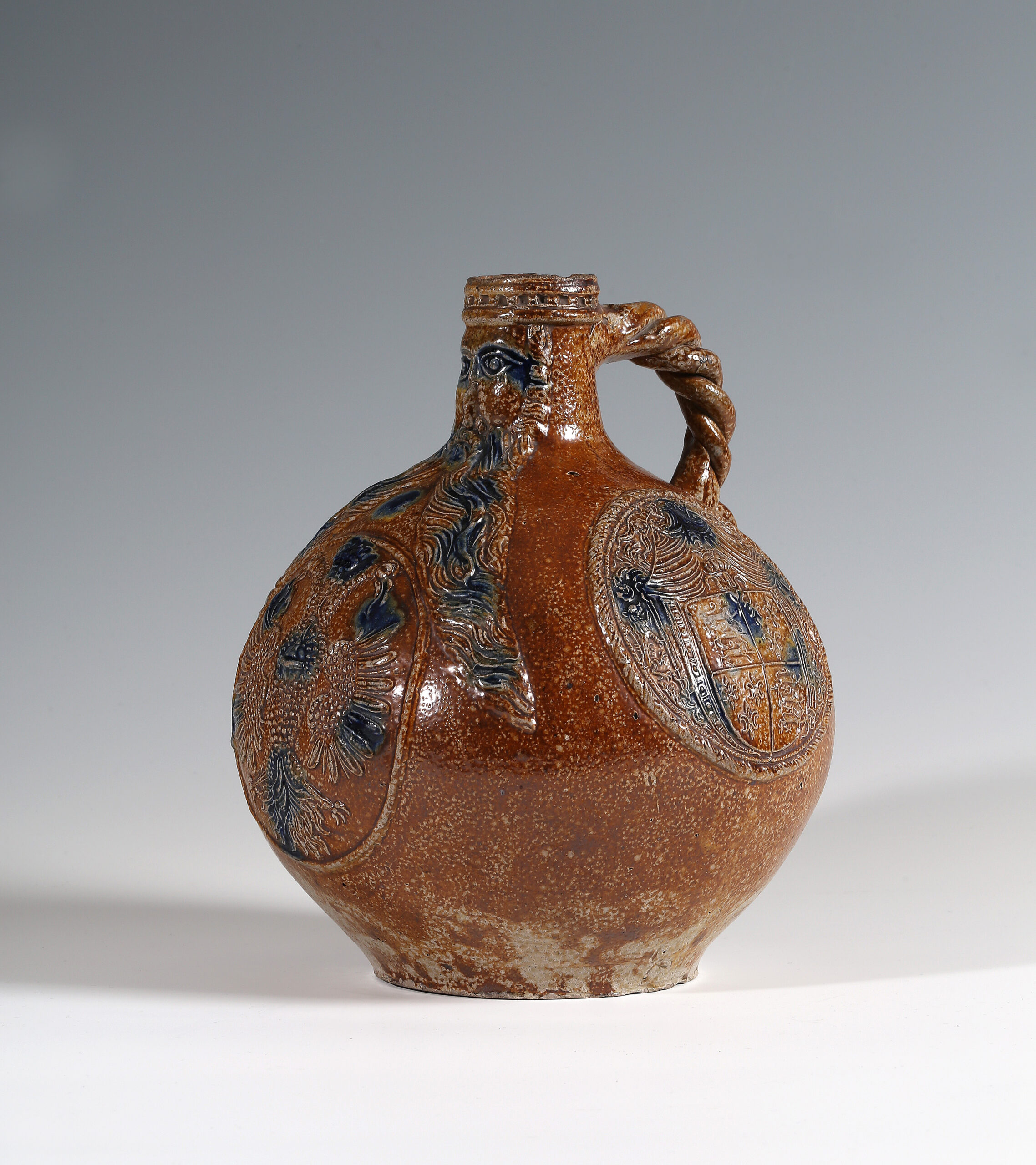 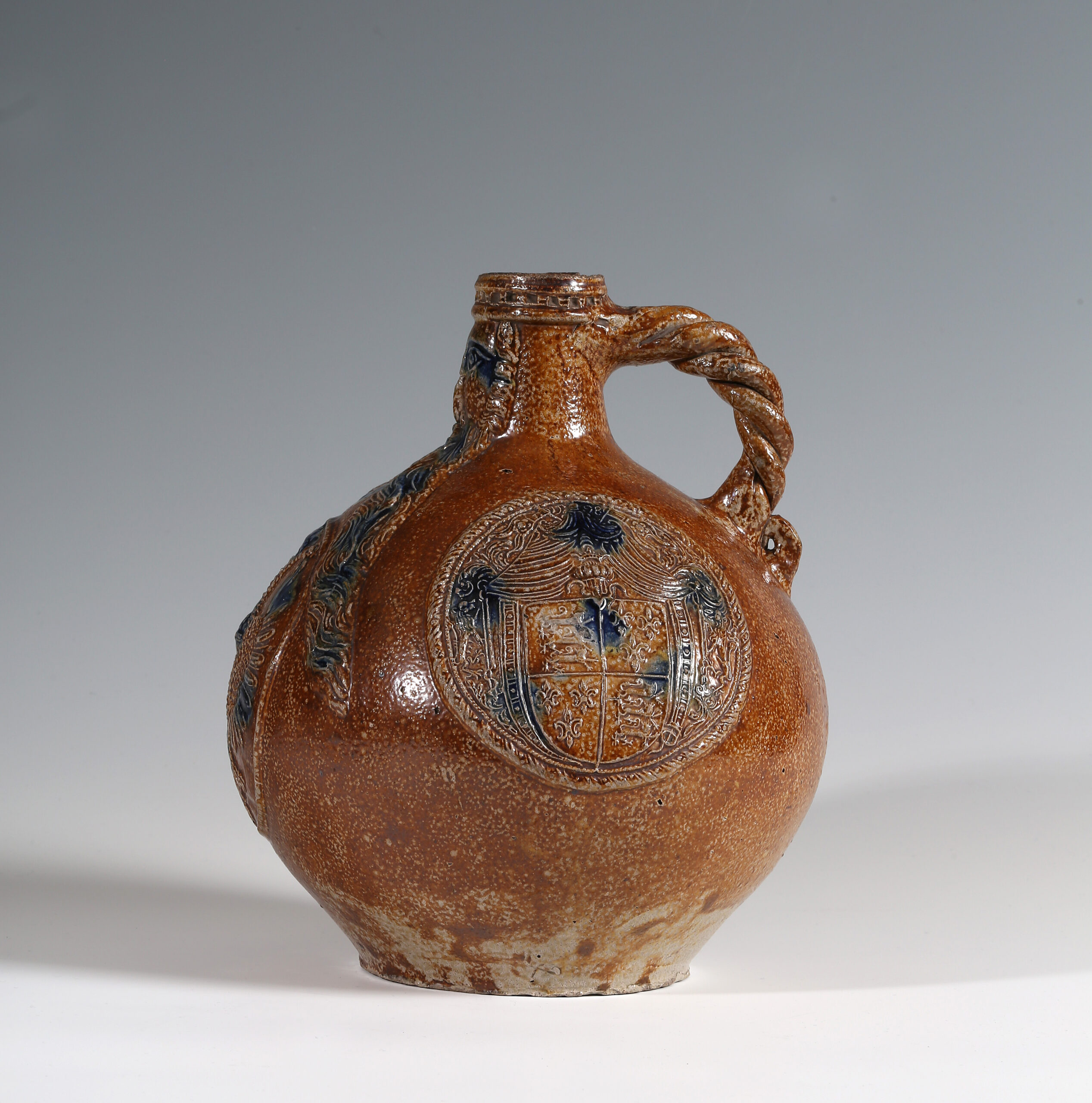 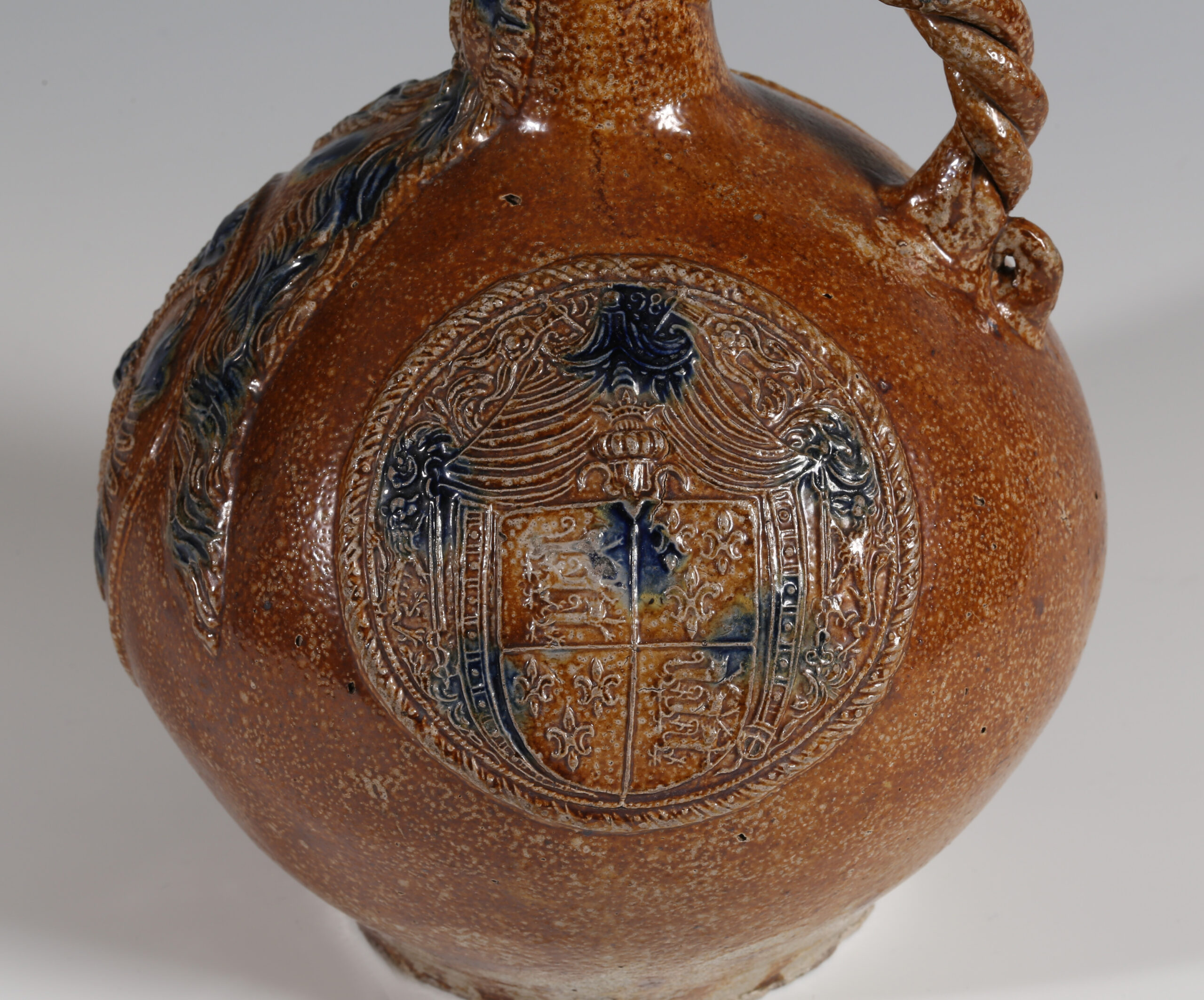 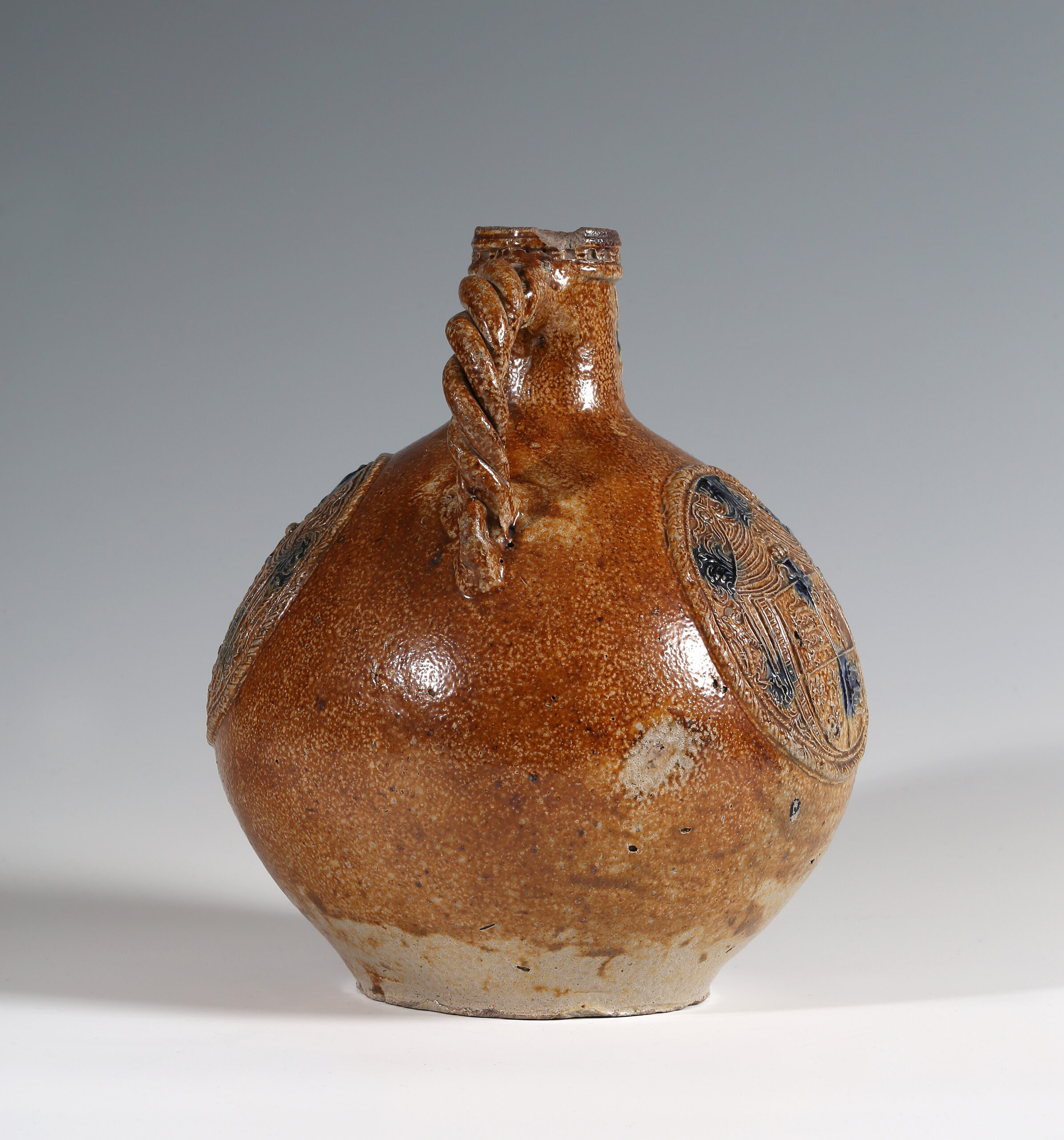 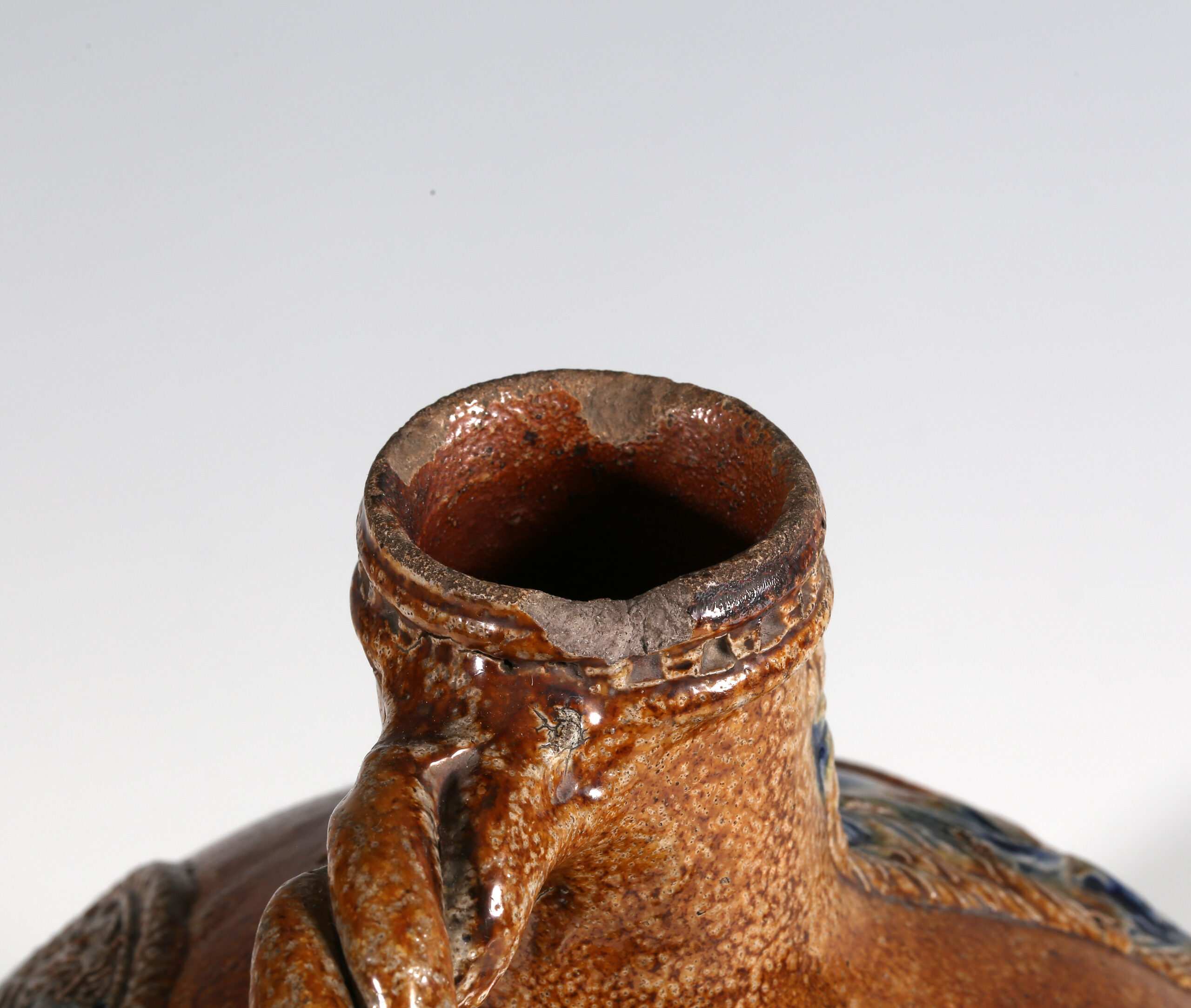 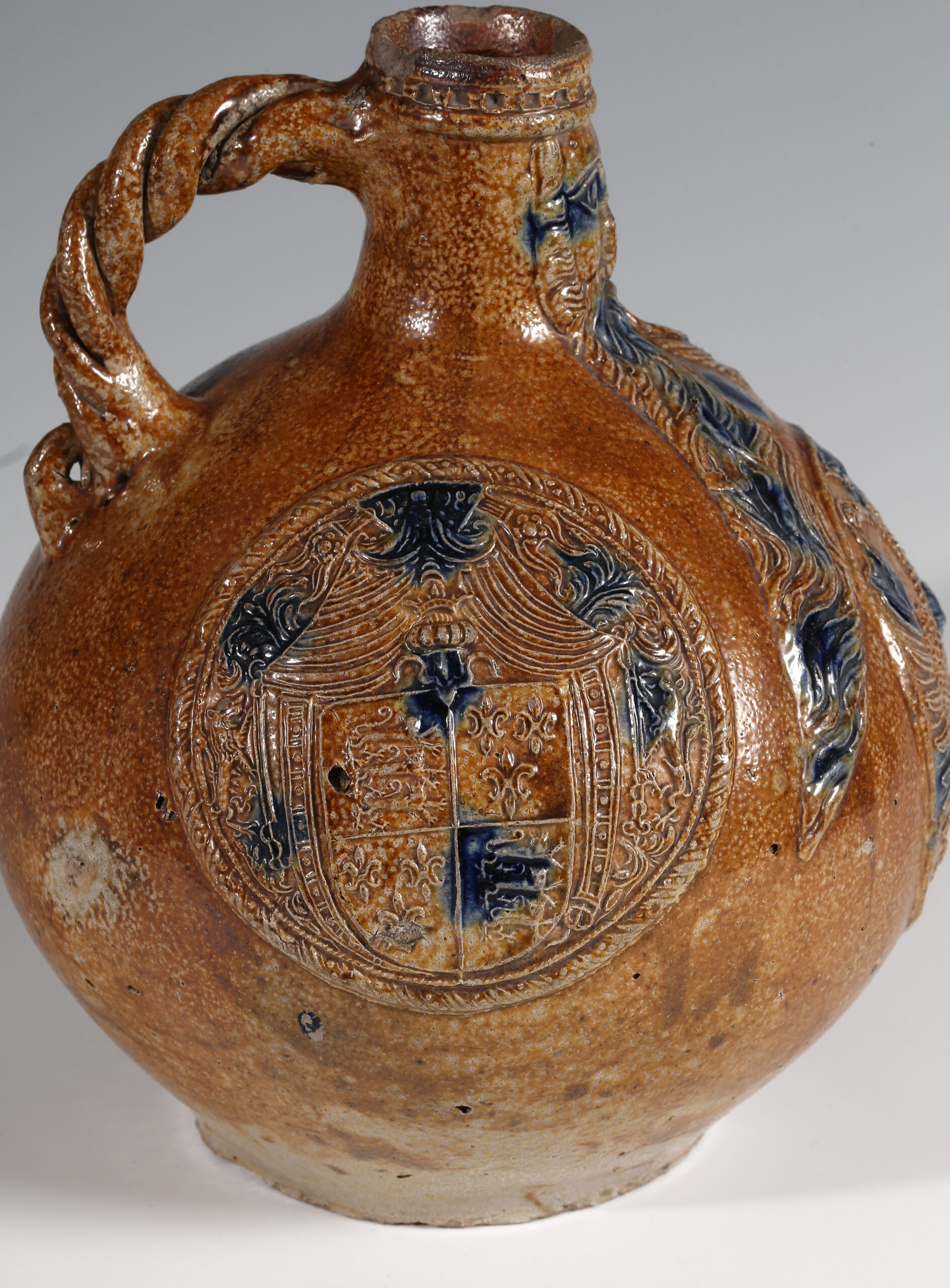 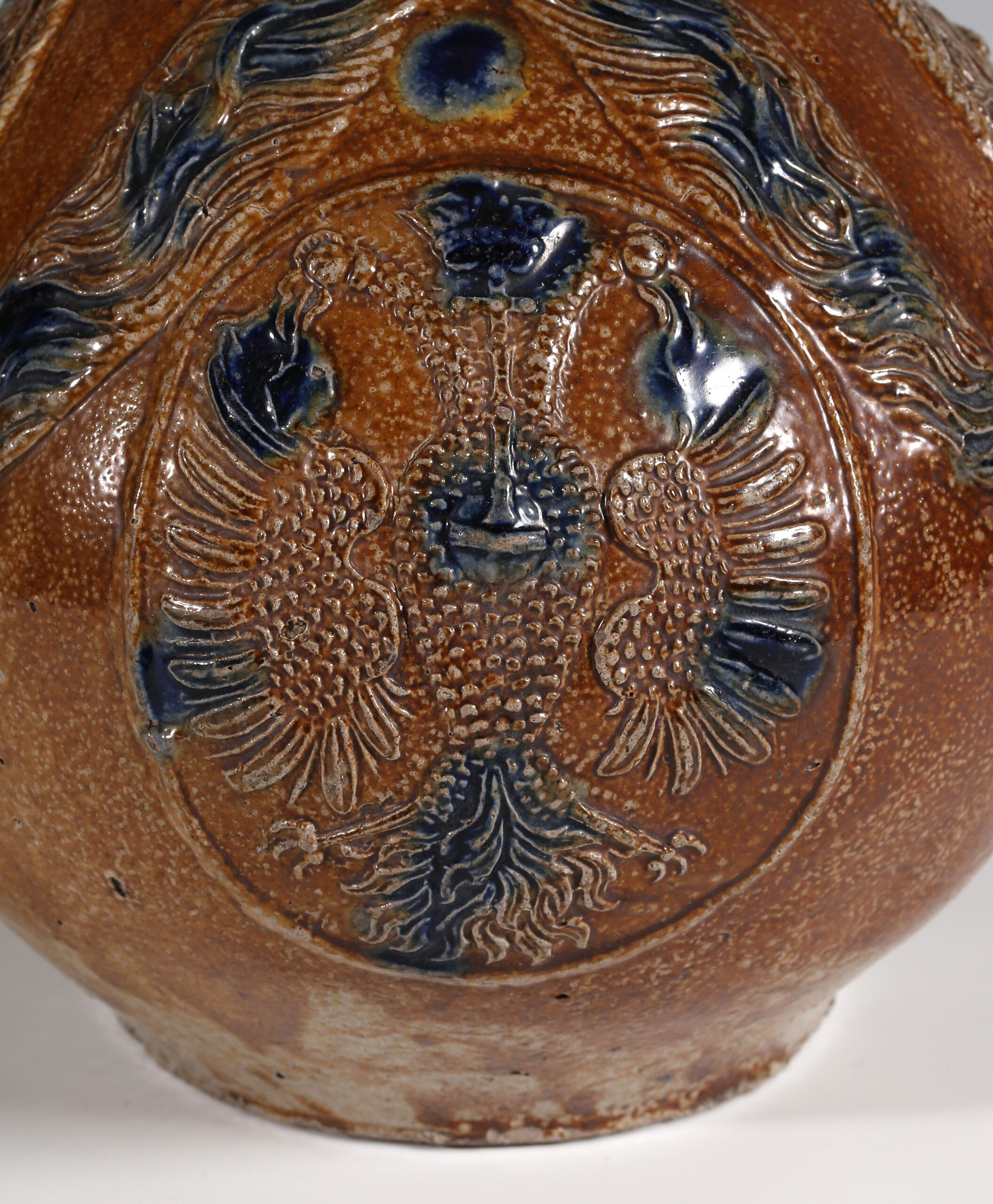 A RHENISH BARTMANNSKRUG WITH THE COAT OF ARMS OF ELIZABETH I

The bifurcated beard of the Bartmaske surrounds the double-headed eagle of the Holy Roman Empire.  It is flanked by two roundels of the arms of Elizabeth I encircled by the Garter supported by the English Lion and Welsh Dragon. The mantling is surmounted by the date 1598.

The trade down the Rhine and on to England brought large quantities of German stoneware from Frechen and Cologne, a type of fine ceramic that could not yet be made here. The trade also brought the light white Rhenish wine that Shakespeare shows was popular at court.

In Hamlet, written between 1599 and 1601, we have the famous exchange at the graveside from Act V, scene 1 when Hamlet is shown the skull:

Hamlet
Whose was it?

First Clown
A whoreson mad fellow’s it was: whose do you think it was?

Hamlet
Nay, I know not.

First Clown
A pestilence on him for a mad rogue! a’ poured a
flagon of Rhenish on my head once. This same skull,
sir, was Yorick’s skull, the king’s jester. 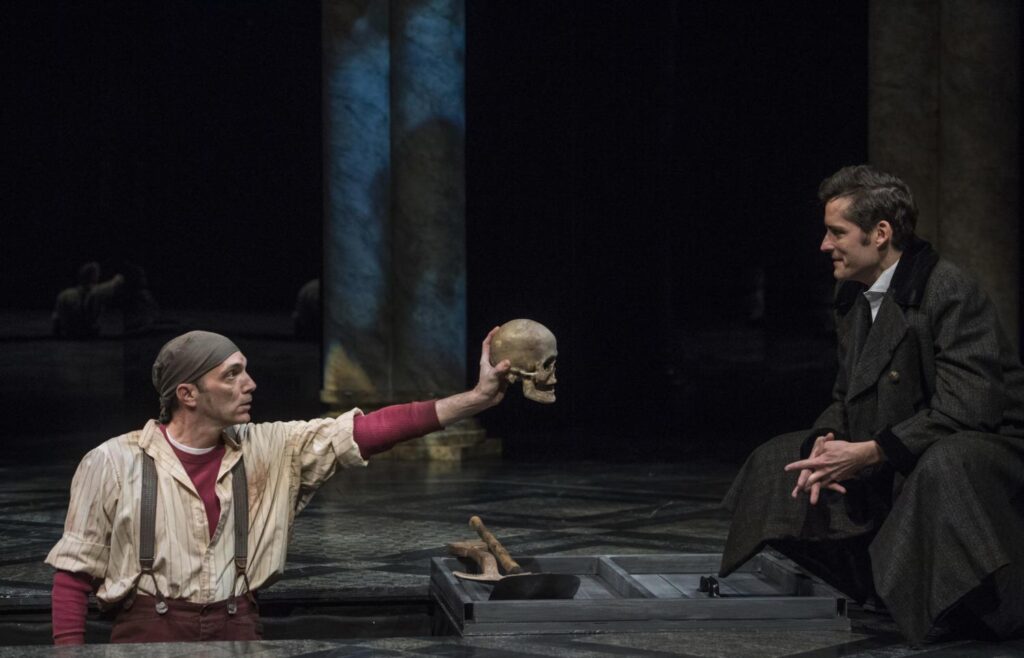 It is tempting to imagine that this vessel with its unusually fine detail and twist handle might have bought the best of the 1598 vintage to Queen Elizabeth I at one of her palaces at Whitehall and Richmond. It would then, of course, be decanted into silver or gold for the high courtiers. Falstaff would have regarded Rhenish wine or Hock as a “thin potation”, but it was actually more expensive than the fortified sack that that he favoured.

The stoneware potters of Cologne had been forced to relocate to nearby Frechen, where many had originally come from, due to the risk of fire and the noxious fumes generated by the salt glaze process. The business prospered hugely, and it is estimated that 10 million stonewares were imported through the port of London between 1600 and 1640 peaking in around 1615 (Gaimster p. 210). Most were plain humble vessels, ours represents the peak of production. The struggle of Spain to dominate the southern Netherlands from 1580s isolated Antwerp and restricted the rival Raeren industry which trade shifted to the Rhine. From the mid-16th century Frechen supplanted Raeren as main exporter to Britain.

The shape is popularly referred to as a bellarmine, a Protestant slight against Cardinal Roberto Bellarmino who was a leading figure in the Counter-Reformation.

Condition:
Some chipping to rim of neck, no restoration