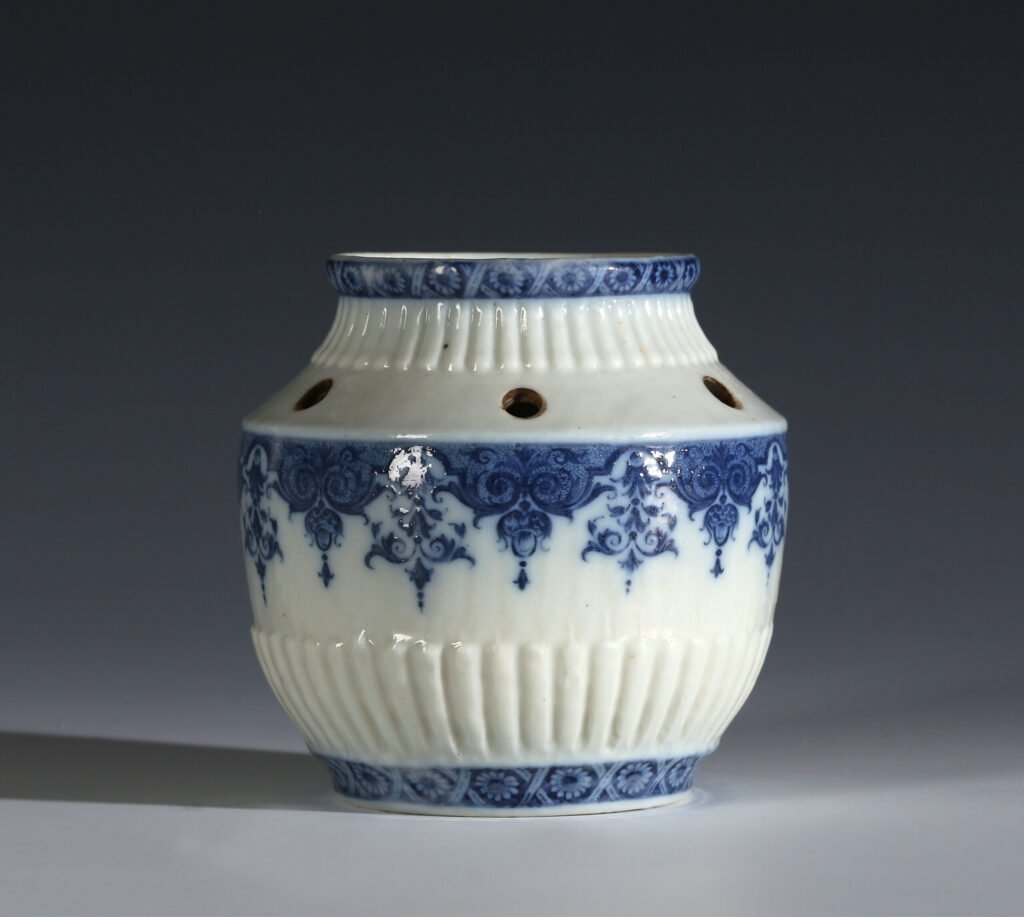 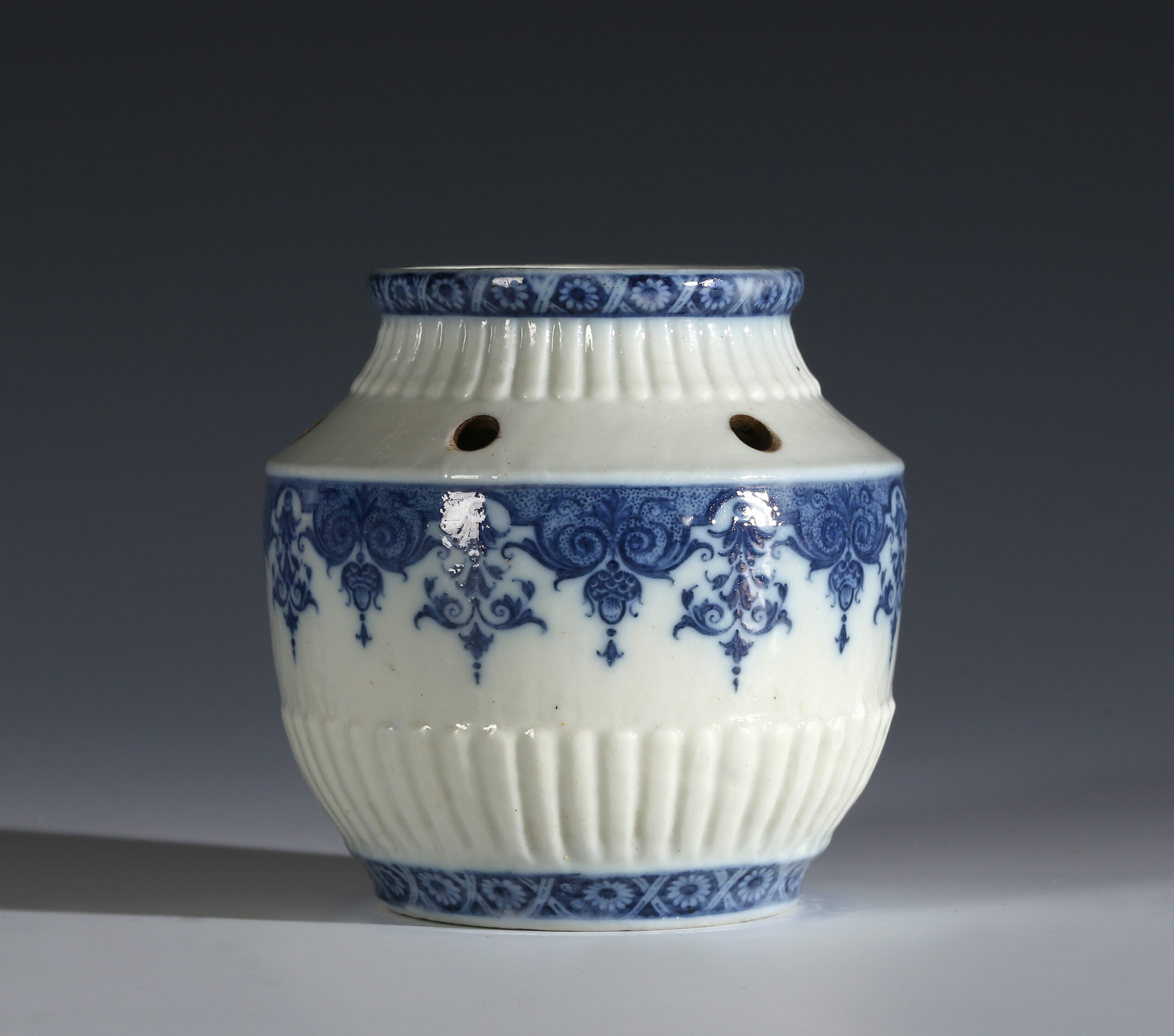 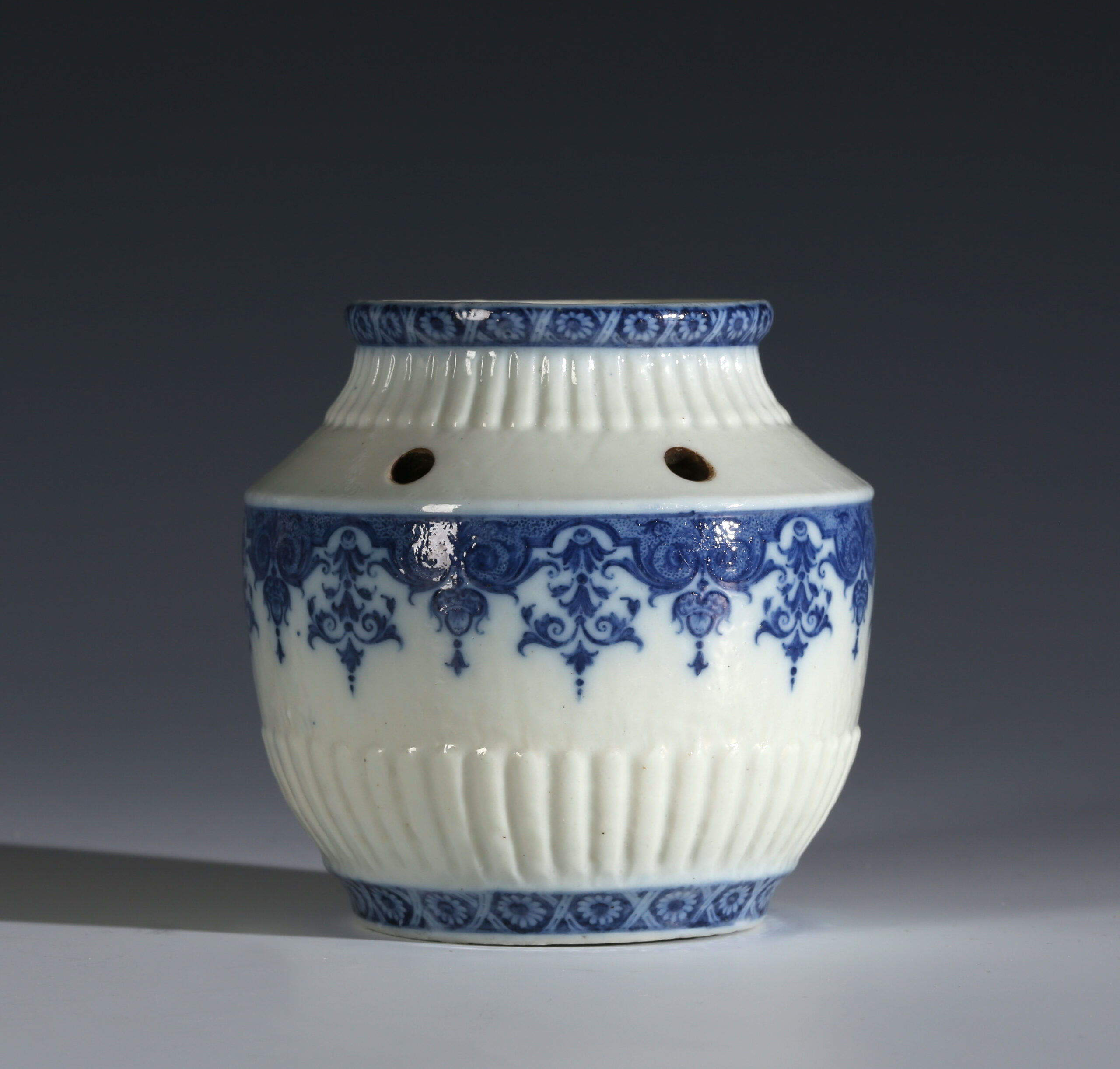 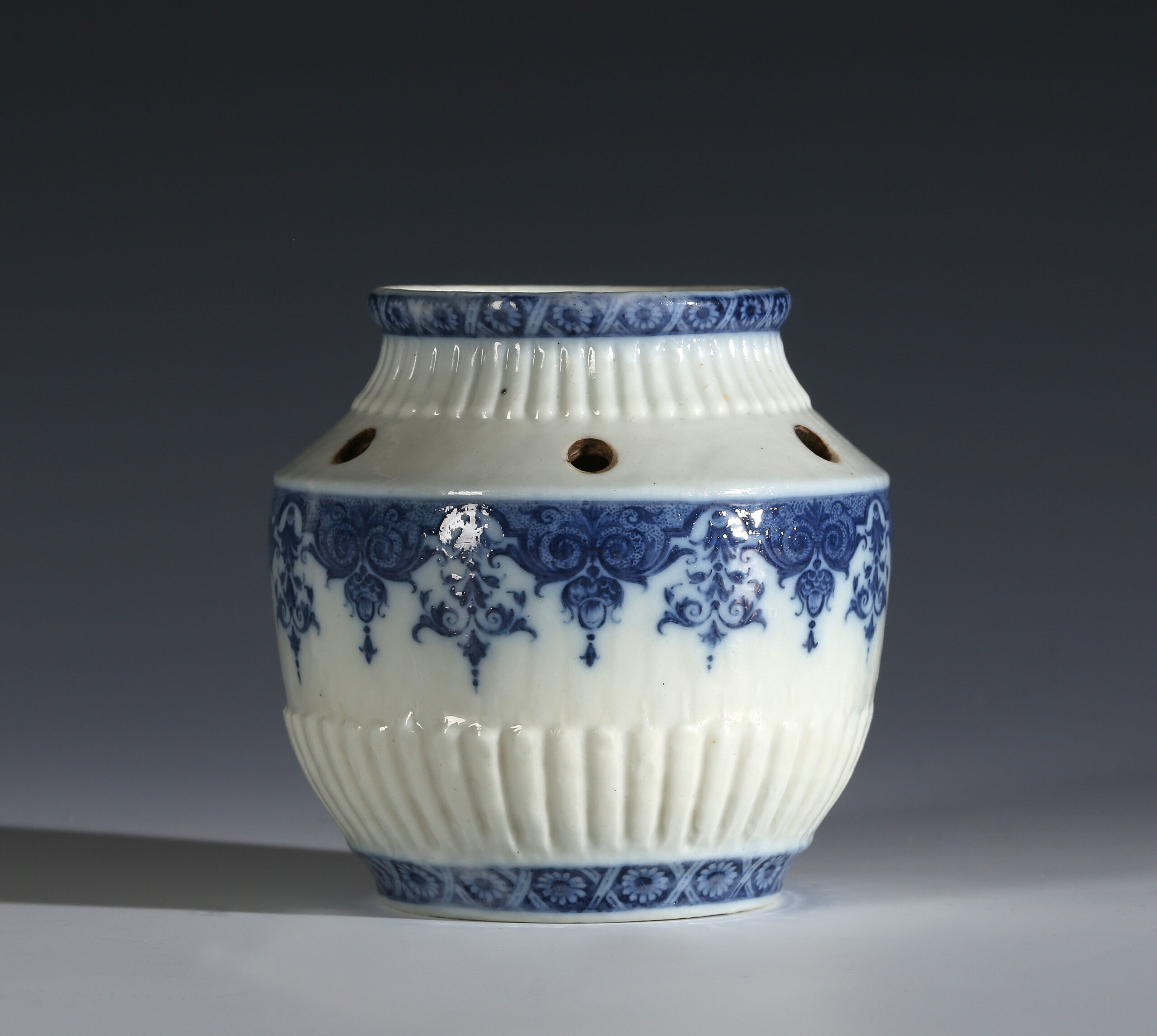 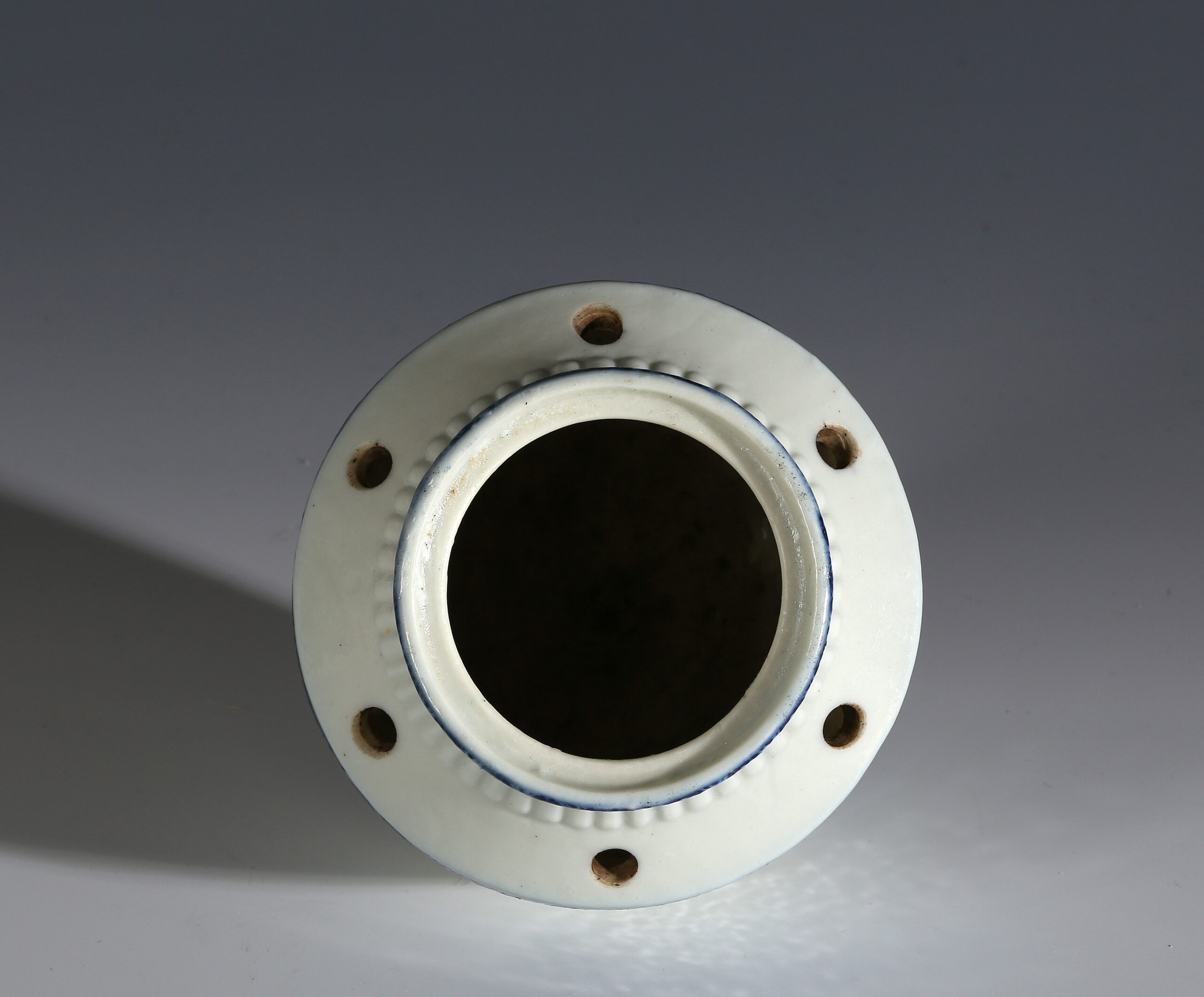 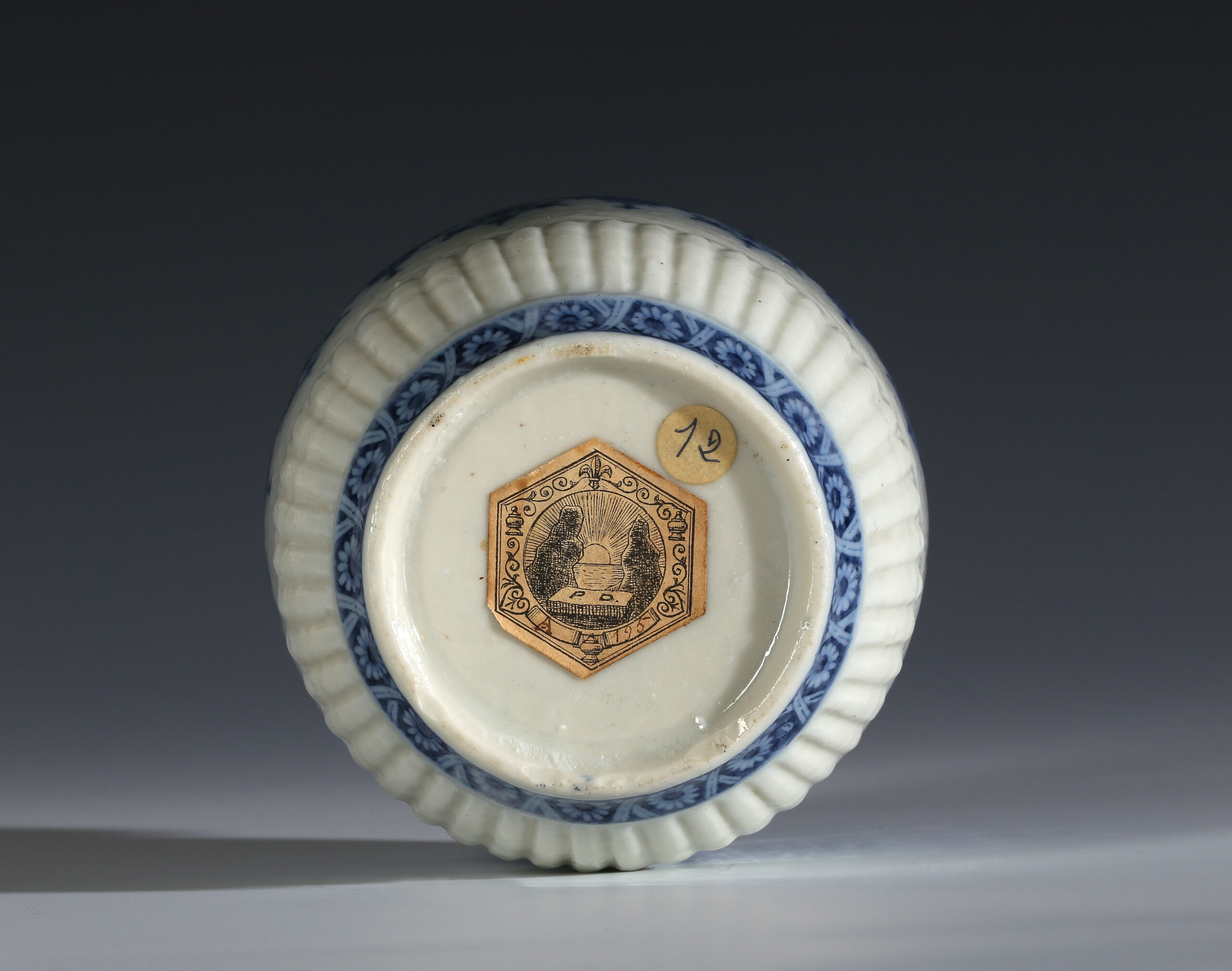 Moulded around the base and neck with gadroons, finely painted with lambrequins or broderies and leaf scrolls against a dotted ground, the foot and neck painted with flower heads against a braid of crossed ribbons.

The soft-paste porcelains of Rouen are amongst the rarest of all European ceramics and the first porcelain to be made in France. Only ten or possibly eleven other examples are documented. Ours, the twelfth, was not known until it appeared recently on the market. No examples of Rouen porcelain are owned by any museum outside of France other than the one example in the Metropolitan Museum of Art in New York.

In France, the first mention of the making of porcelain occurred on October 1, 1673, when Louis XIV granted a new privilège by letters patent to establish a porcelain factory to Louis Poterat, the eldest son of the faïencier Edmé Poterat.

The privilège stated that Louis Poterat through his travels in foreign countries and by extensive experimentation had found the secret of the manufacture of true porcelain and it authorised him to establish a factory to produce all kinds of porcelain similar to that of China and to decorate it in blue and white.

The patent went on to claim that they could only produce porcelain in conjunction with faience because “the porcelain can only be fired if it is surrounded entirely with faience to protect it from the violence of the furnace, which must be moderate for the firing”, (for the complete privilège see Grandjean 1999, p. 59).

There had been some disputes within the Poterat family. When the first privilège was due to expire the Inspector General of Finances, Louis de Phélypeaux, comte de Pontchartrain directed the intendant of the Généralité de Rouen, Lefèvre d’Ormesson, to draw up a report on June 19, 1694 on the factories of Louis Poterat and his brother Michel. This mentions that Louis Poterat made porcelain as well as very beautiful earthenware in the Dutch manner.

Pontchartrain asked: “Do they also possess the secret of porcelain, and are they able to produce items of the same quality and beauty as were produced formerly?” and d’Ormesson replied: “they do possess the secret, but make little use of it, concentrating primarily on faience.”

In 1694, Louis Poterat stated that he still produced porcelain but said that only he knew the secrets and feared that his workers would discover them. For this reason, he only dared to make fine porcelain in very small quantities and by himself, without the help of workers. Louis died in 1696 and production had probably ceased before then. 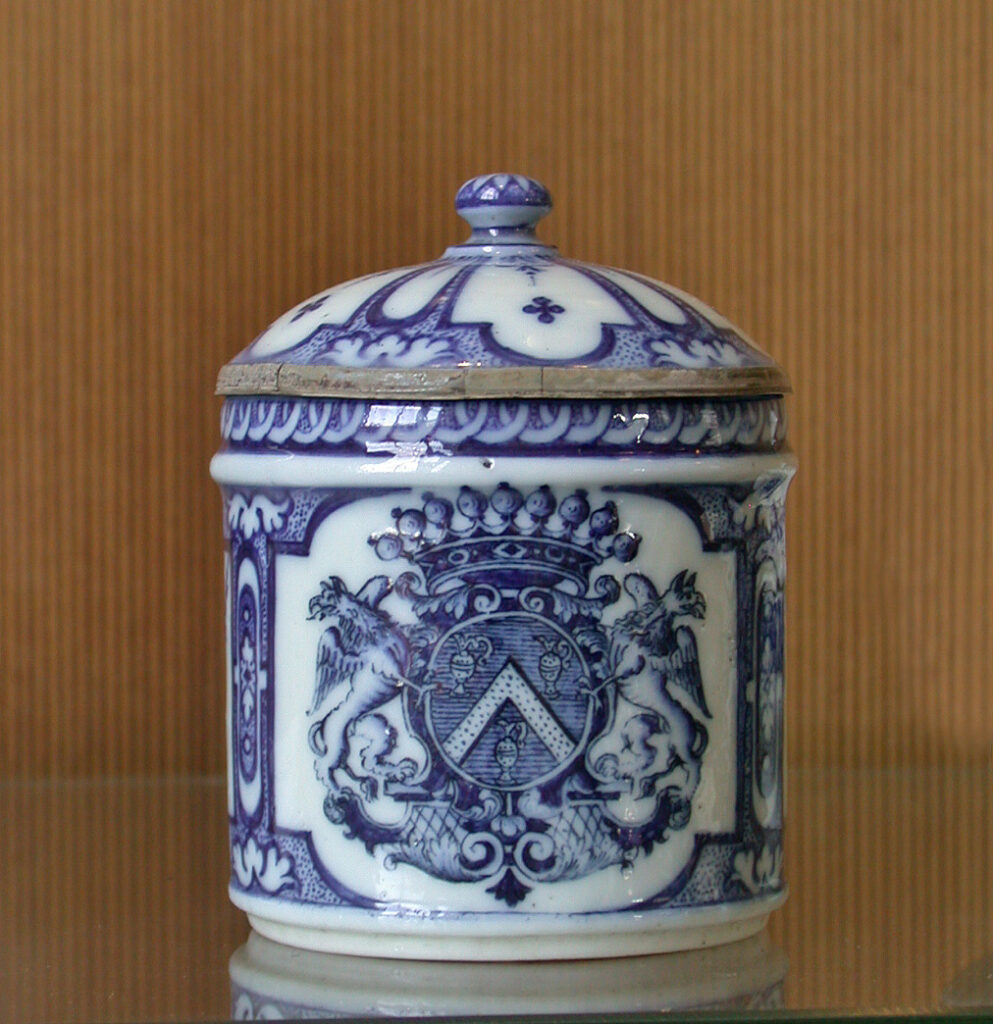 The story of Rouen porcelain was only rediscovered and the privilège published by André Pottier in 1847 but at the time of writing he knew of no example. The curator of the Musée de Sèvres at the time, Xavier Riocreux, drew his attention to a moutardier that they had recently acquired from a family collection in Normandy. Pottier subsequently identified the coat of arms as being of Jacques Asselin de Villequier (1669-1728), counselor to the parliament of Normandy in 1695.

André Pottier was able to identify a small number of other related pieces writing that “These precious objects are admirable for the delicacy with which they are decorated and the exquisite vitrification of the paste. The whiteness of the body is lightly coloured with green, like the faience of the same period”

Rouen porcelain is characterised by its dense grey paste and the exceptionally fine quality of its draughtsmanship which appears to be executed with a fine quill rather than a brush. Our potpourri shares the identical ornament with such as the Metropolitan jar and the distinctive dotted ground that is unique to Rouen porcelain as well as the intertwined ribbons with alternating flowers which is a decoration also found on Rouen faience

The surviving identified examples of Rouen porcelain can be dated on the evidence of the armorial moutardier and on stylistic grounds due to its relationship to silver to around 1690. If there were earlier porcelains made at Rouen in the 1670s, which the documents do suggest, they have not been identified.

In the past a number of other pieces have also been attributed to Rouen including the set of four vases in the Musée des Arts Décoratifs (ref no. 27643 a & b) which are now considered to be early Saint Cloud and those pieces with the ‘A.P.’ mark which Régine de Plinval de Guillebon has shown are from the later Paris factory of Antoine Pavie. From the study of a number of pieces Cyrille Froissart suggests that Rouen porcelain fluoresces rather differently to Saint Cloud under ultraviolet light, that seems to be the case with our piece.

Europeans looked in awe on Chinese porcelain and naturally sought its secret, it was so superior to any ceramic body produced here. Francesco de Medici’s production in Florence in the 1570s was the first successful attempt to produce a soft paste porcelain and further small-scale attempts in Italy at Genoa or Savona in the 1620s and 30s and then by Canon Manfredo Settala in Milan before 1664 have been noted by J.V.G Mallet. In London John Dwight was granted patent for fourteen years in 1672 for “the mistery of transparent earthenware, commonly known by the names of porcelain or china…” and wasters of high-fired porcelain were excavated from the site of Dwight’s Fulham pottery in the 1970s but no complete examples are known. Even if Rouen porcelain itself did not go on to achieve commercial success its technology laid the foundations for the production of first viable porcelain factory of Saint Cloud and the great tradition of French soft-paste porcelain.

Condition:
The six holes in the shoulder were drilled after firing and correspond to the holes that were formed before firing in other examples such as on the pot pourri in the Metropolitan Museum of Art, those holes are moulded with floral rosettes which copy silver examples. We presume that our piece originally was mounted with silver floral rings. No restoration.

Acquired by The Nelson Atkins Museum of Art, Kansas City