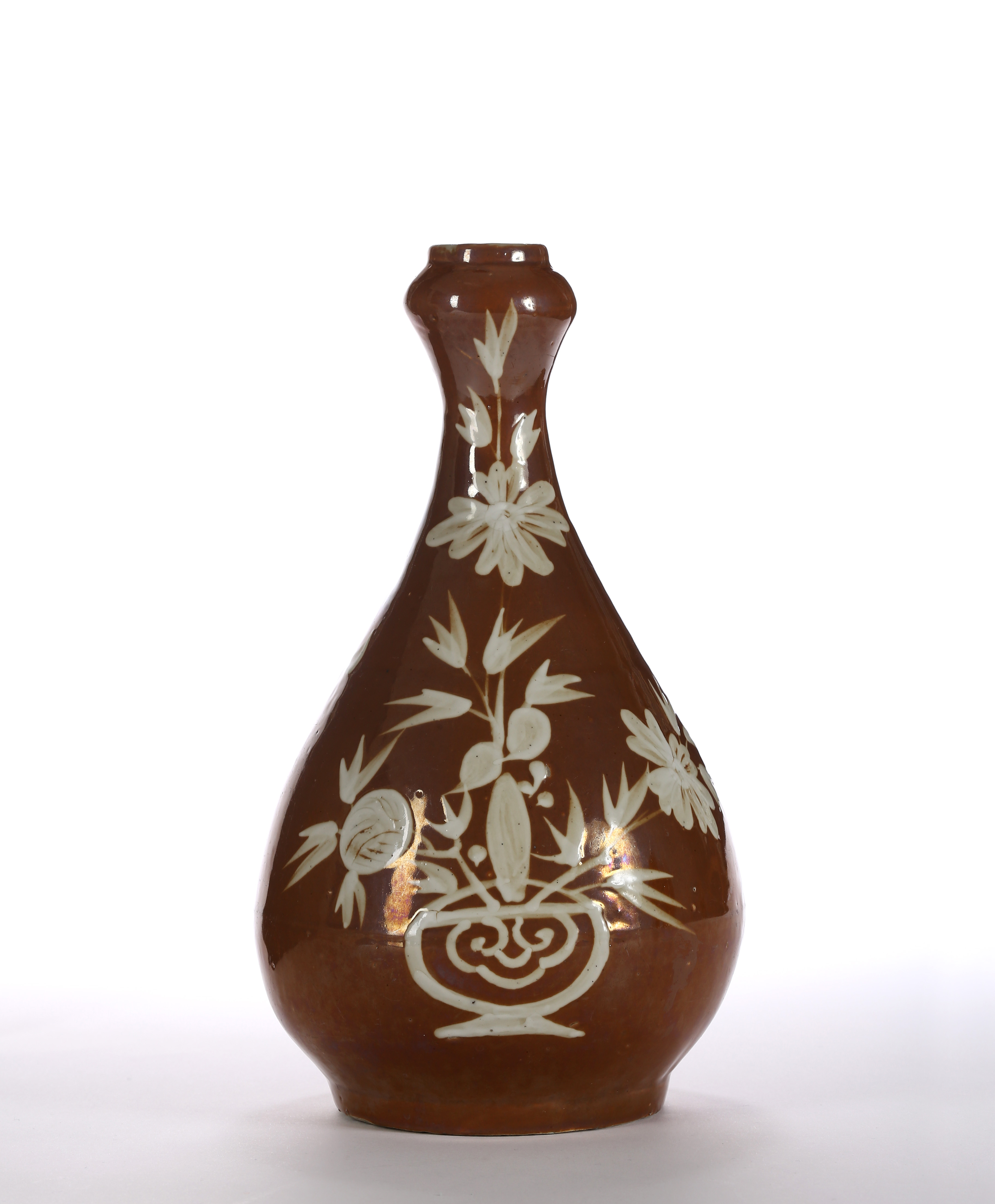 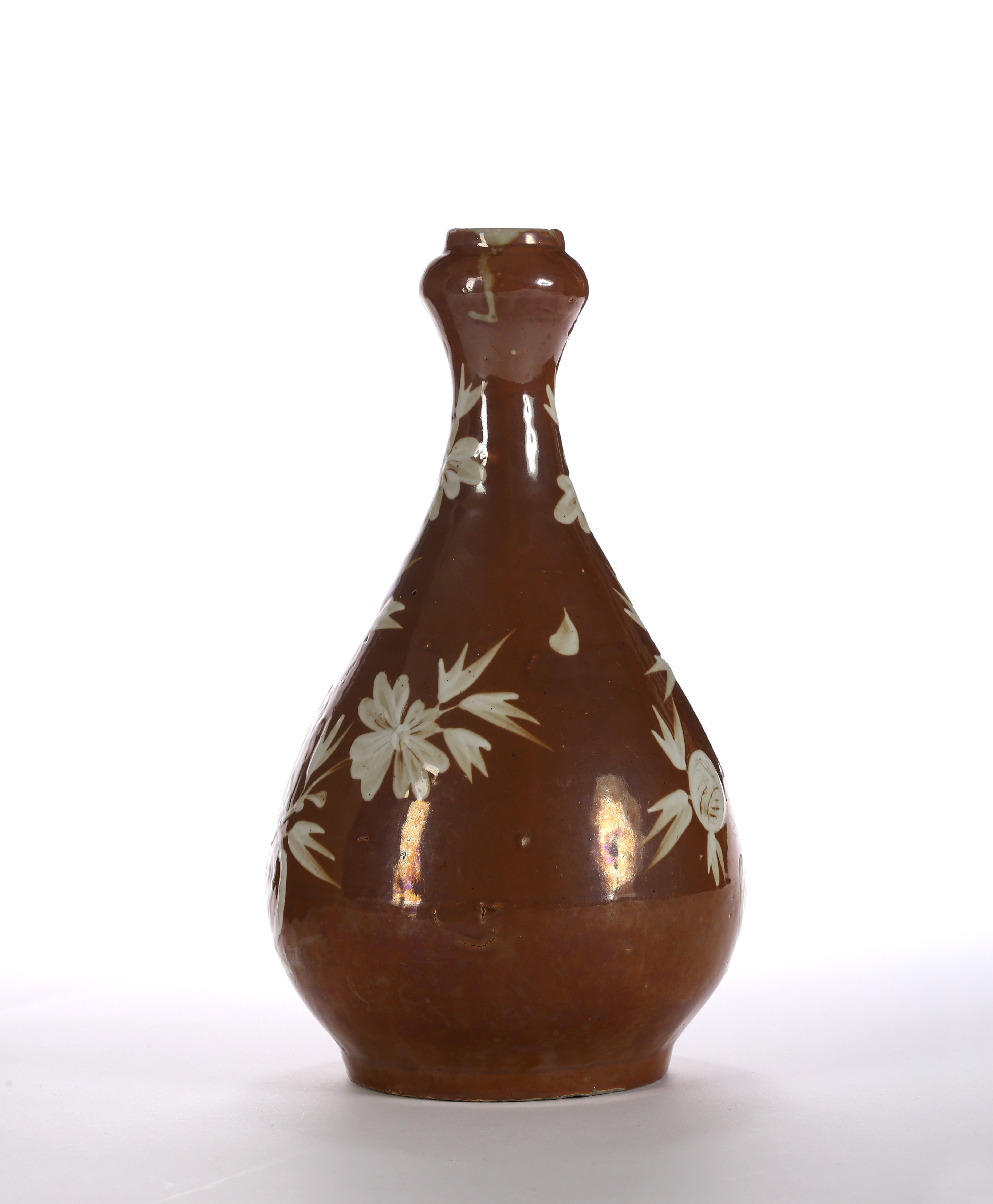 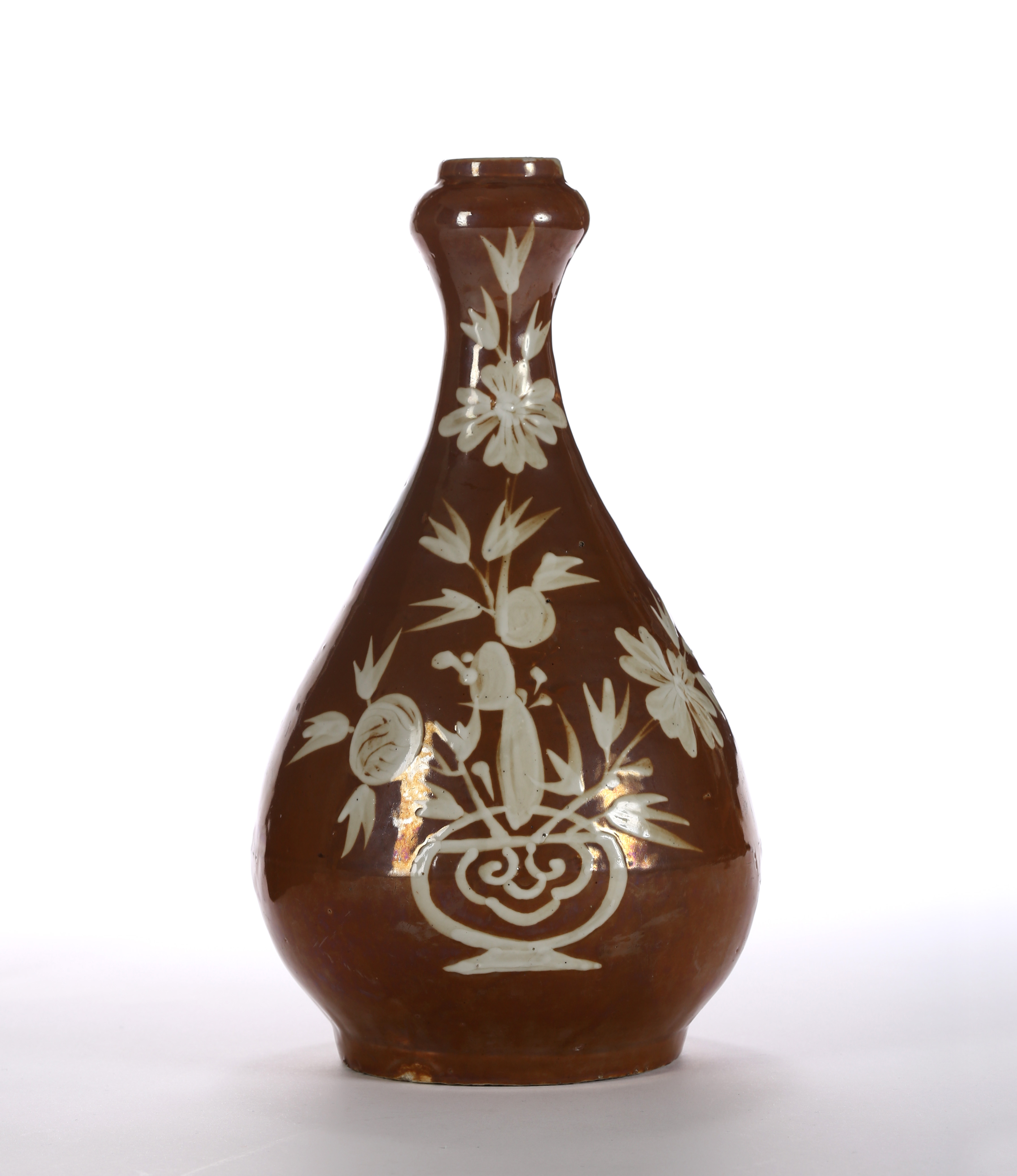 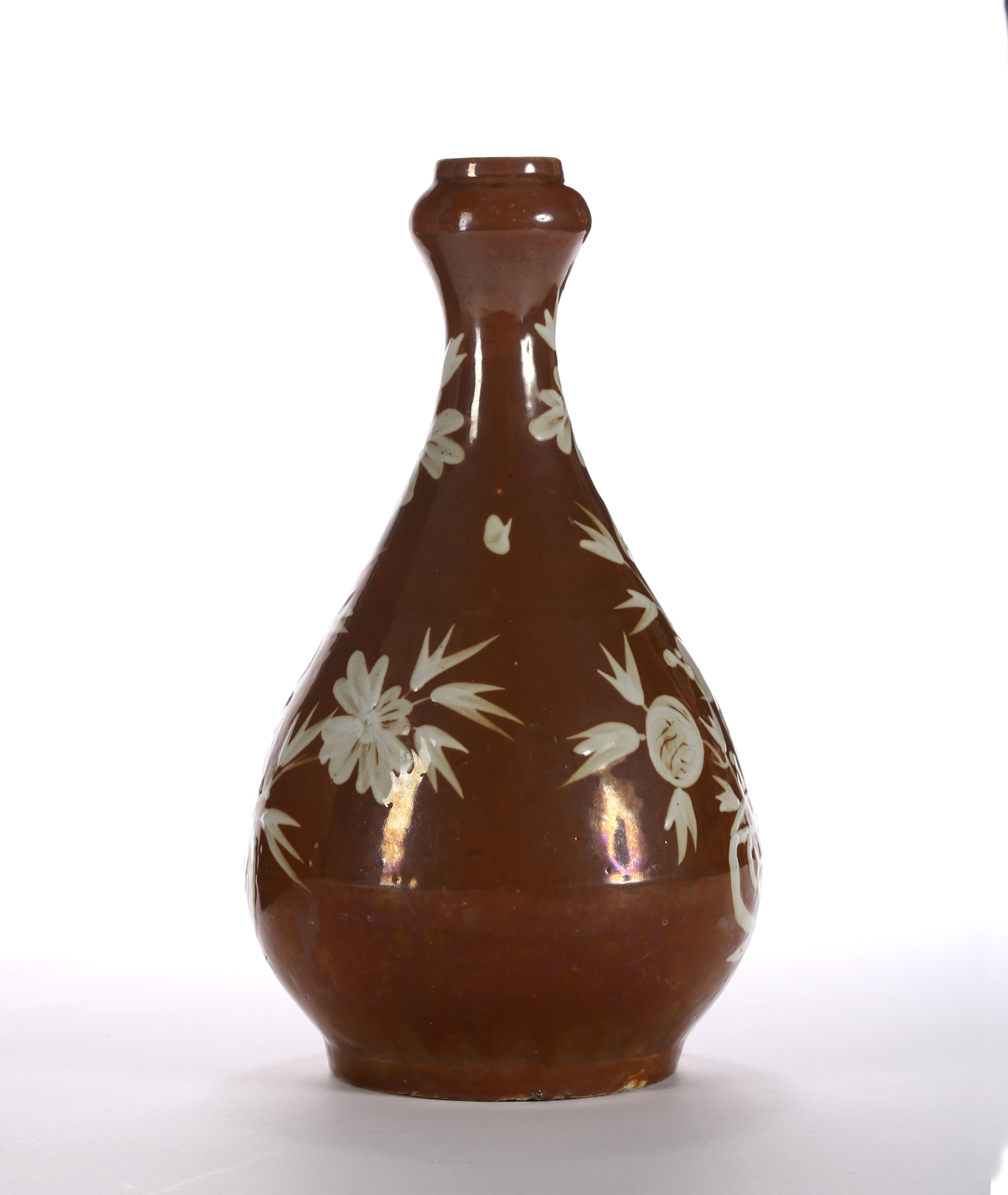 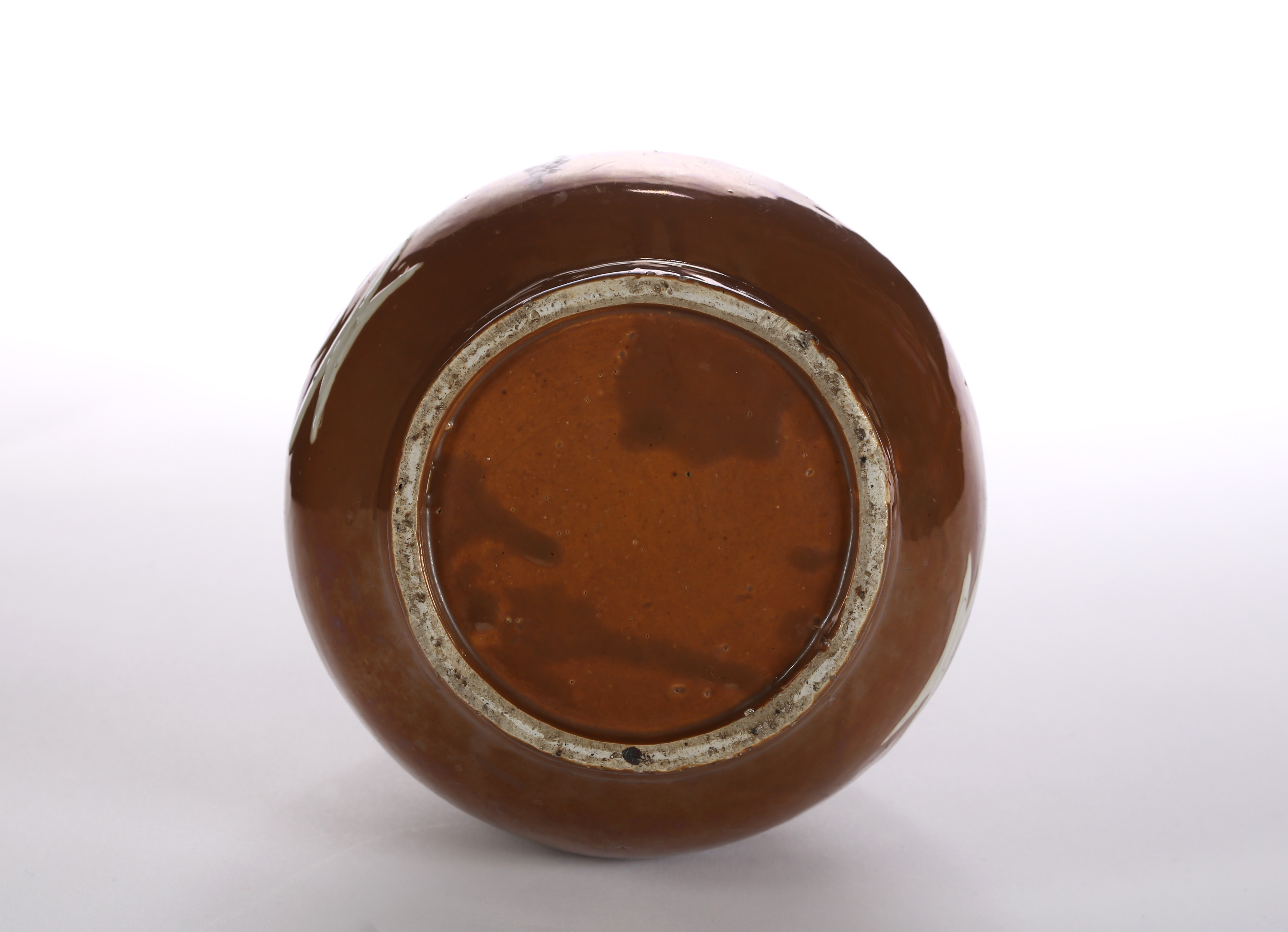 An interesting aspect of this type of brown-glazed flask is the favour that it found in royal and noble collections in France and England in the 17th and 18th century.

The lustrous brown glaze on this pear–shaped flask with a “garlic–bulb” shaped mouth is derived from iron-oxide, and has been hurriedly painted in a thick white engobe (a slip of liquid porcelain) with chrysanthemum and other flowers displayed in a large bowl, details are incised through the engobe. While traditionally known as Swatow-type ware, after the port of Shantou, the term associating it with coarse wares produced at the Zhangzhou kilns in Fujian province, sherds have been excavated among kiln debris at Zhushan in Jingdezhen, dating to the late Ming era.[1]  This flask is part of a group of Kraak-type export wares, such as kendi, water–droppers, small jars and dishes.[2] These more refined wares have been found throughout southeast Asia, and in historical collections in the Middle East and Europe.

The shape has been associated with the Islamic market, as Sir A. W. Franks (1826–1897), curator and first Keeperof the British and Medieval Antiquities and Ethnography at the British Museum, writing in the nineteenth century, suggested a pair of similar bottles (Franks.98 and 98a) were for the base of a narghile (a water pipe for smoking tobacco). Jessica Harrison–Hall, curator of Ceramics at the British Museum, in her Catalogue of Late Yuan and Ming Ceramics in the British Museum (2001), has argued that the form was designed for the Chinese domestic market as containers for flowers or liquids.[3]

A similar flask in the Royal Collection Trust (RCIN 1257) matches the description of one listed at Kensington Palace (where it is currently displayed in the Queen’s Bedchamber) in the 1693-94 inventory of Queen Mary II’s ceramic collection: ‘One fine flask of brown China with raised works on it’, in the middle ‘Over the Bedchamber Doore’.[4] Two spouted vessels, probably kendi or water–droppers, with similar decoration were recorded in the 1696-97 inventory of Kensington Palace, placed over the chimney shelves in the Old Bedchamber: ‘two browne spout potts with white rased worke on them’.[5]

Other examples are known with European precious metal mounts, such as the Burghley Teapot, now at Anglesey Abbey, Cambridgeshire (The National Trust), formed from a jar, which was first recorded in the 1688 inventory prepared by Culpepper Tanner (d.1726), of the collection formed by the well-travelled collector John Cecil, 5th Earl of Exeter (c.1648–1700) of Burghley House, Lincolnshire: ‘1 Brown and white relev’d Tea pott with Guilt handle, Spout Top & bottome & a little figure & Chaines on the Topp of itt’.[6] A similar flask survives in the collection at Burghley House. A pair of pomegranate-shaped porcelain ewers, circa 1600–25, at Charlecote, Warwickshire (The National Trust), formerly in the collection of William Beckford (1760–1844), were mounted in Europe with silver-gilt collars, and chained stoppers, circa 1650.[7]

In Europe, examples of this ware appear in late 17th century royal inventories. At Versailles, in the collection of the Grand Dauphin, son of Louis XIV, the following is recorded in a 1689 inventory: ‘Une Calebasse couleur de feuille morte couverte ornée de fleurs blanches. Haute de neuf pouces huit lignes’.[8] It was one of two gourd-shaped jars, the second having a broken cover, along with a pair of bottles, all with this unctious brown monochrome ground colour described by the French cataloguer as being the colour ‘dead leaves’, painted with white flowers.

It is probably ormolu-mounted vases of this type that Madame de Pompadour bought from the Paris marchand mercier Lazare Duvauxon the 18th August 1751:

This humble domestic flask, a truly global commodity found all over the world in the seventeenth century, became an exotic princely treasure on its arrival in the West.

[2] Examples from dateable shipwrecks are in Sten Sjorstrand, The Wanli Shipwreck and its ceramic cargo, Kuala Lumpur, 2007, no.7280, cited in Teresa Canepa, Kraak porcelain: the rise of global trade in the late 16th and early 17th centuries, London, 2008, p. 179, fn.22