A TOURNAI BUST OF EMPEROR FRANCIS I 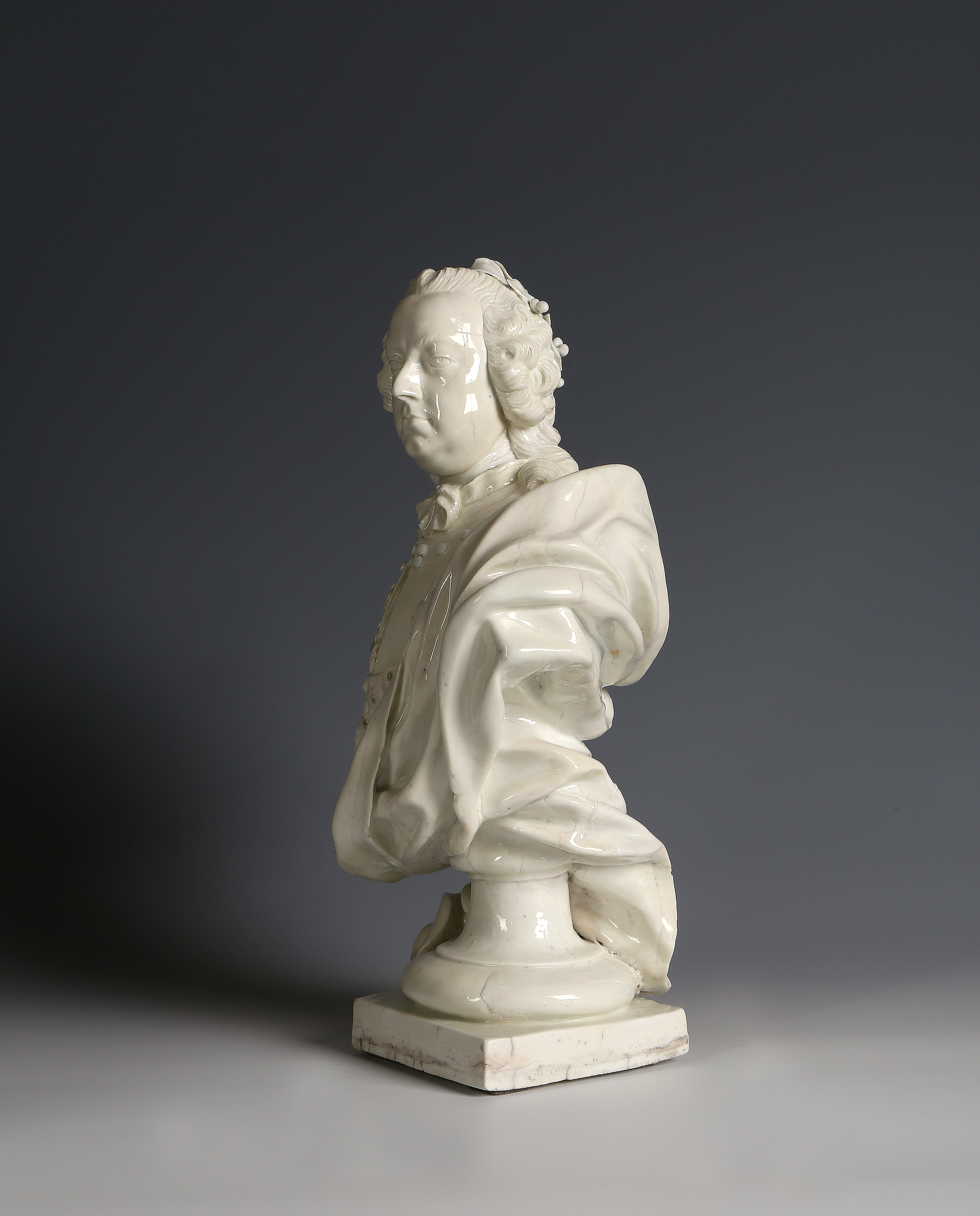 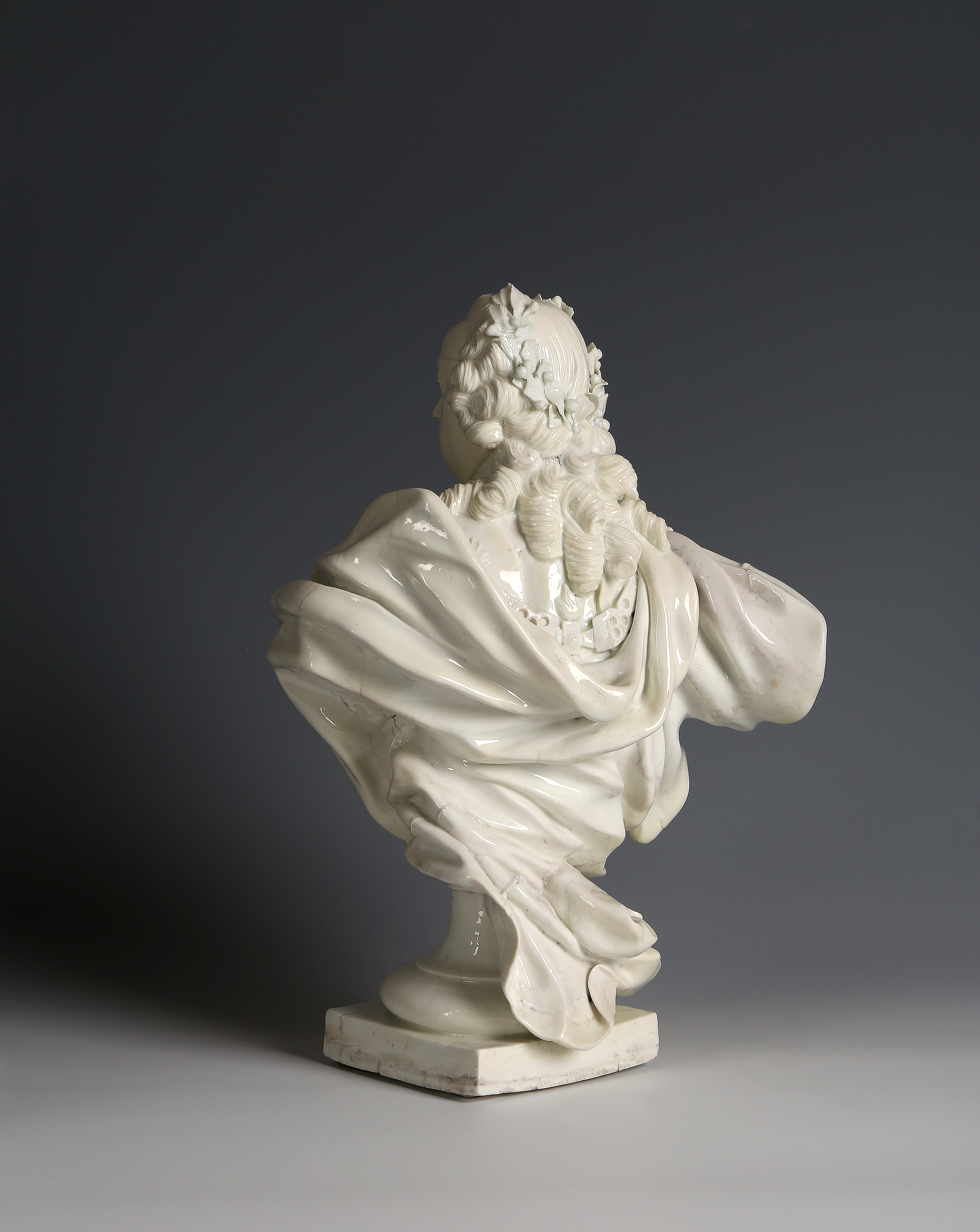 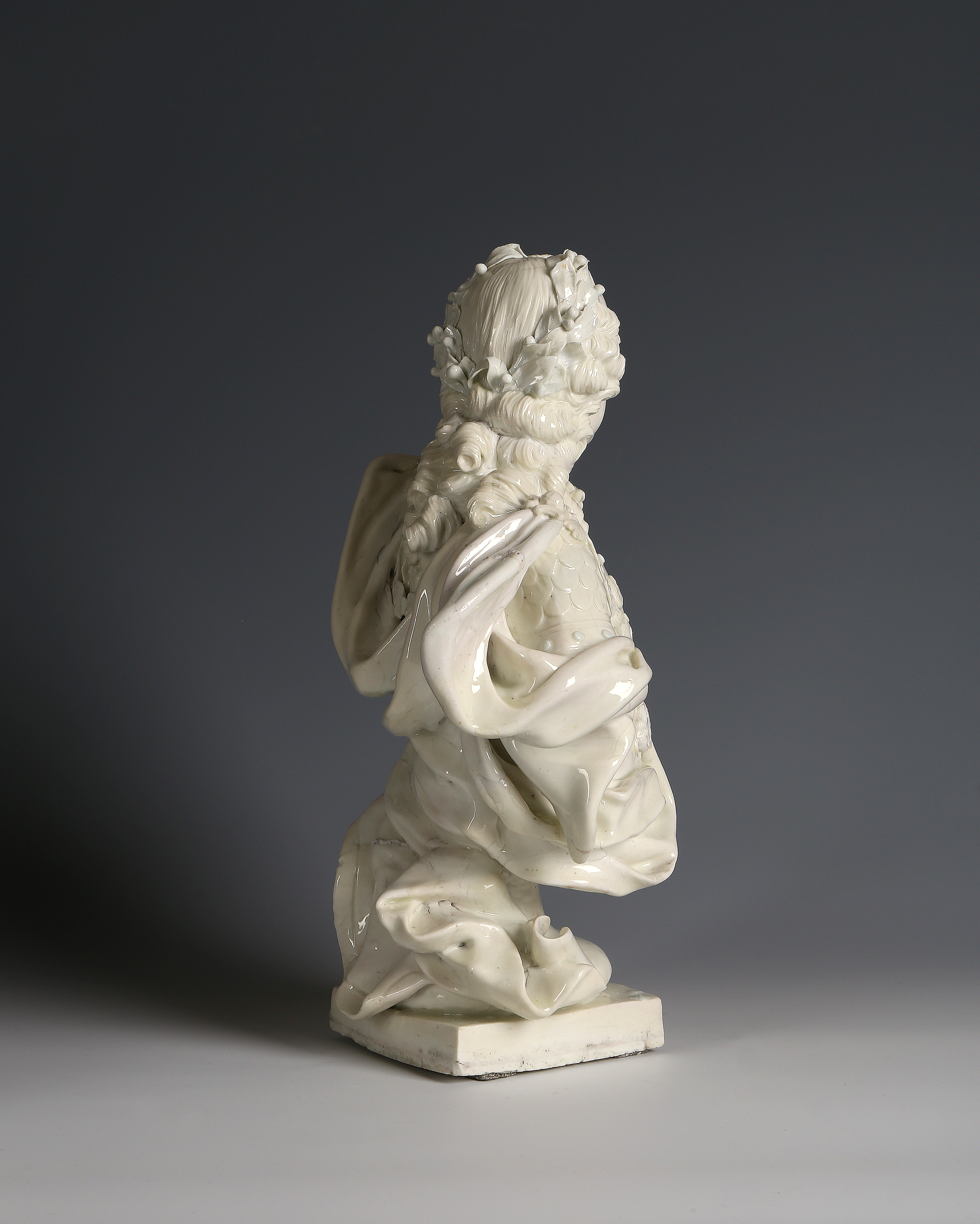 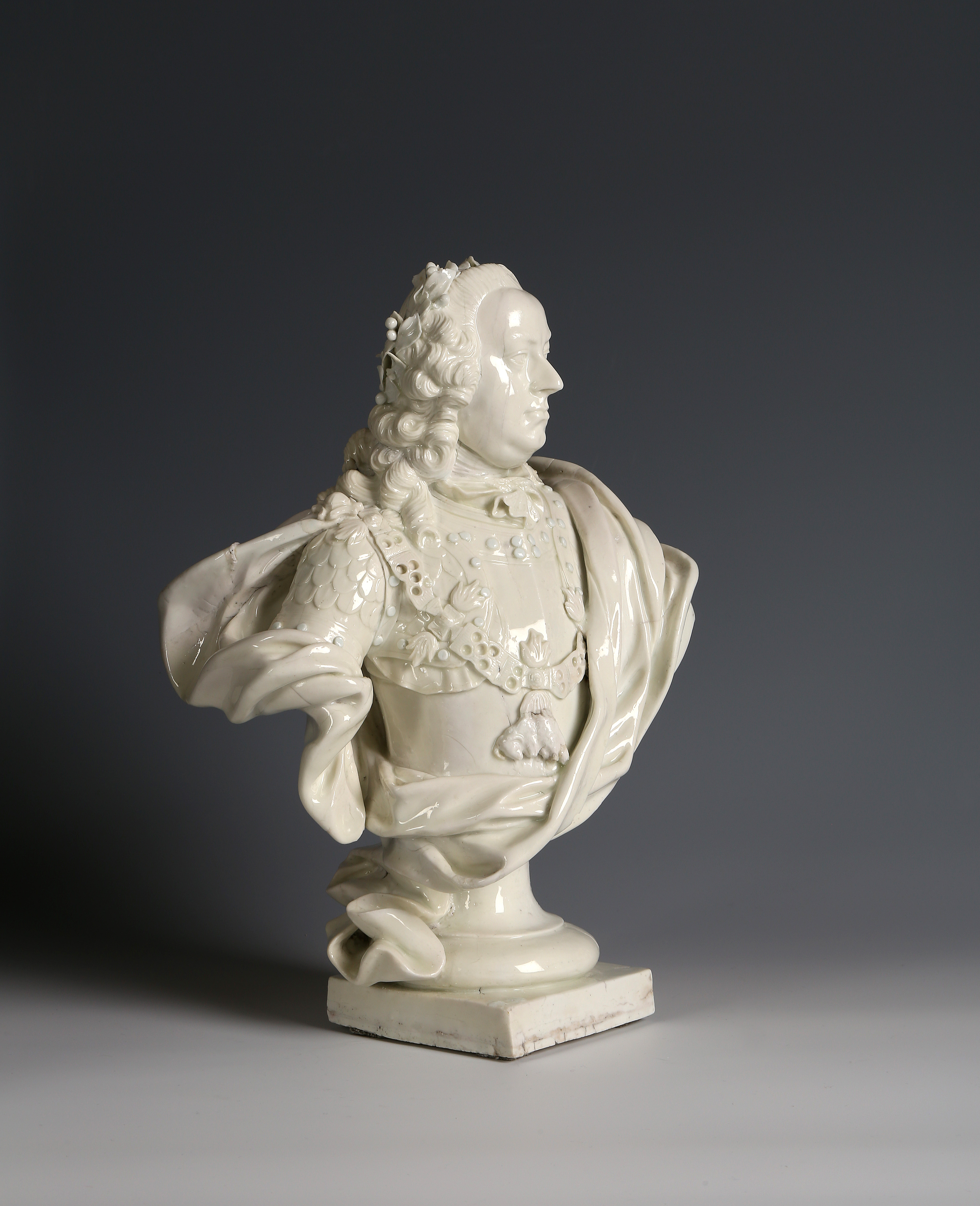 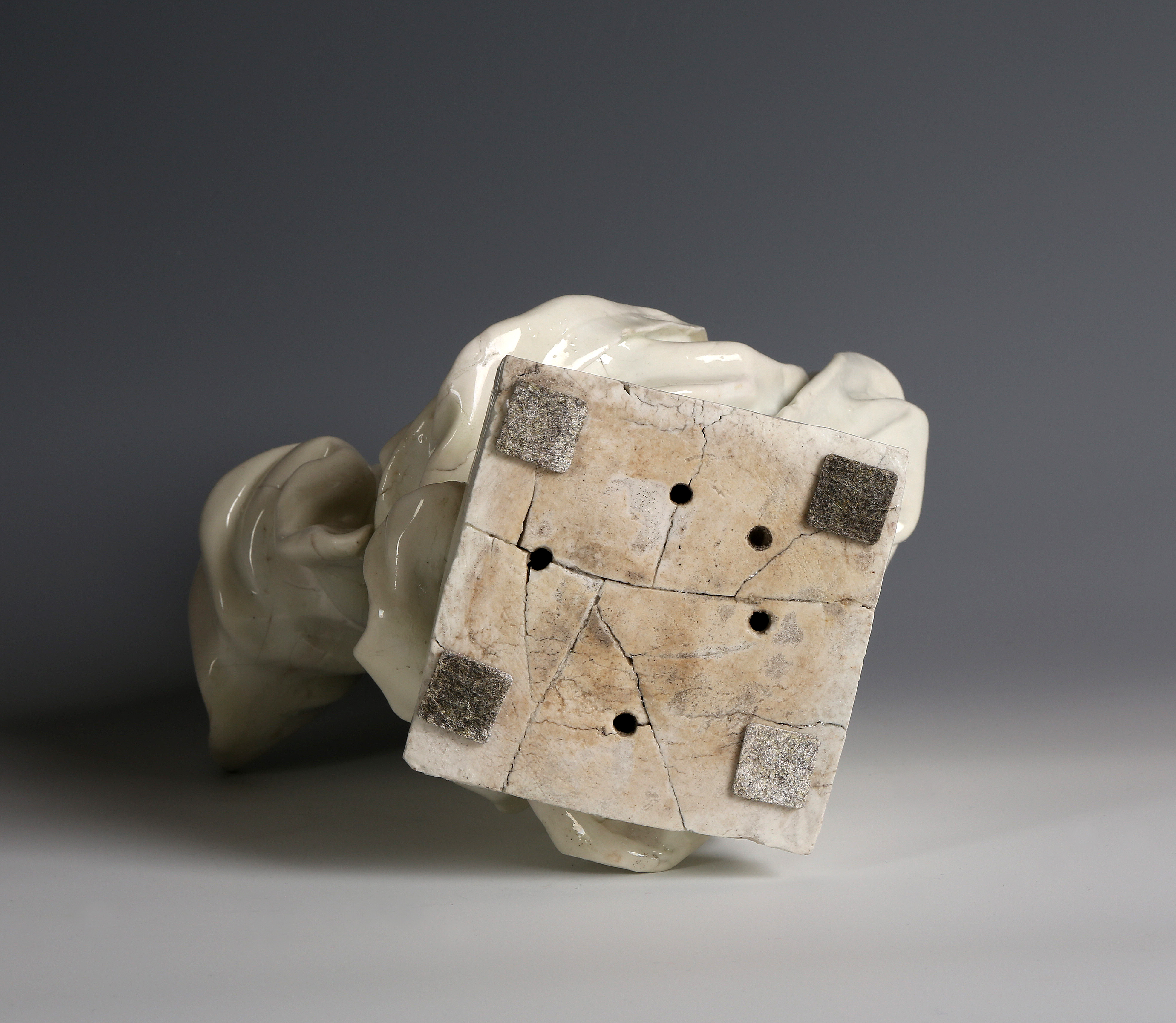 A TOURNAI BUST OF EMPEROR FRANCIS I

This bust, of Francis I, Holy Roman Emperor is one of a series of six remarkable large porcelain sculptures of imperial and princely personages produced in the mid–eighteenth century at the porcelain manufactory in the city of Tournai founded in 1750. There is documentary evidence that the series had begun by 1756, just five years after the factory had produced soft–paste porcelain, and despite the challenges of the new paste, these ambitious figures were clearly intended to proclaim the factory’s accomplishments as well as acknowledge the role and patronage of these individuals in their success. The workmanship is the equal of some of the best European ceramic sculpture executed at Meissen, Sèvres, Chantilly and Chelsea.

There has been no definitive study of these busts, which were last published in 1937.[i] The best known model is of Louis XV, of which at least six examples have been identified, one of which is in the Metropolitan Museum of Art, New York (1977.216.5a,b). In his recent study, Jeffrey Munger has suggested this porcelain bust although resembling a contemporary marble bust of Louis XV by Jean-Baptiste Lemoyne the Younger (1704–1778), dated 1757, also at the Metropolitan Museum (41.100.244), does not appear to be a reduction of any known marble or bronze bust and that the unidentified source for the porcelain model depicts the monarch at a much younger age.[ii] In addition to Francis I and Louis XV the series includes busts of Charles of Lorraine, the Empress Maria Theresa, the Archduchess Maria Anna of Austria and Princess Anna Charlotte of Lorraine.

The factory’s origins began in 1750, when François Carpentier applied for permission to establish a faience factory in the city of Tournai, then part of the Austrian Netherlands ruled over by Francis I, now Belgium.[iii] As the city had suffered during the Austrian Wars of Succession (1740-1748), his request to create a new industry, which would improve the economy, was easily granted and the factory was established on the Quai des Salines. Almost immediately, François-Joseph Peterinck (1719–1799) a merchant interested in producing porcelain, purchased the factory and the privilege from Carpentier. Through Carpentier, Peterinck was introduced to the Dubois brothers, who knew the secrets of soft-paste porcelain. Robert Dubois, a turner, and his brother Giles, a painter, had worked at Chantilly and Vincennes, and later after leaving Tournai worked at the faience fine factory of the Rue de Charenton, Valenciennes and Armand-des-Eaux. On 3 April 1751, Peterinck, who had been running the factory from November 1750, was granted a monopoly on porcelain production lasting 30 years by Prince Charles of Lorraine, then Governor–General of the Netherlands (see below), through the Empress Maria Theresa of Austria, his sister–in–law, and on 7 April 1752, he received the sovereign’s patronage and the right to bear the title of ‘Manufacture Impériale et Royale’. Peterinck had presented the prince with a large two–tiered porcelain chandelier ornamented with 3,000 flowers, which has apparently not survived.

Peterinck’s enterprise attracted two skilled sculptors to Tournai, the factory having already begun figure production by 1754. In 1756, Antoine Gilis (1702–1781), who had trained in Antwerp and later worked in Valenciennes, was engaged by Peterinck to start a design academy to improve the artistic skills of his workers (it was to become the Académie des Beaux–Arts de Tournai): Gilis worked at the factory along with his son Jean until 1764.[iv] In 1756, in his contract with Peterinck, Gilis agreed to model a large statue of St. Theresa, which was to be made in porcelain and offered to the Empress Maria Theresa: a statue of the saint is in the Musée royal de Mariemont (H.27).[v] The second sculptor was the renowned Parisian Nicholas–Joseph–François Gauron (circa 1736– 1773), who had worked at the Mennecy factory before his arrival in 1757 or 1758. The talented Gauron left the factory in 1764, and went on to work for ceramic factories in Brussels, Weesp, Liège and from 1770, in England for William Duesbury’s Chelsea and Derby works.

The bust of Francis I (1708–1765), hereditary prince of Lorraine and Grand Duke of Tuscany, later Emperor of the Holy Roman Empire (r.1745–1765) and husband of the Empress Maria Theresa, was made in two versions. In both he wears a cuirass or breastplate, emphasizing his military superiority, wrapped in the dramatic drapery of his cloak. Our example is perhaps the earliest and possibly the work of Antoine Gilis. There are slight differences in the drapery and hair between the two versions, but most striking is the laurel wreath crowning his head as well as the traditional reticulated linked chain supporting the Order of the Golden Fleece (Ordre de la Toison d’or), which he received in 1723. His portrait in armour wearing the order on a ribbon was painted by Martin van Meytens (1695–1770); one example is in the Österreichische Galerie Belvedere, Vienna (Nr. 5539). It is likely that the bust is a compilation of details sourced from various images, such as a bronze bust, dated 1750 by Matthäus Donner (1704–1756), in the Kunstkammer of the Kunsthistorisches Museum, Vienna (6143). The wreath, order and ornate rivets on his cuirass also appear on Austrian Thalers as part of his imperial imagery, as well as on medallions commemorating his death in 1765. An interesting technical feature is that the wreath and rivets appear to be in a whiter paste. The only other example of this first version of which we are aware is the example in the Musée National Adrien Dubouché, in Limoges, France (ADL 1372).

The second version, of which there are two examples (one in the Cinquantenaire Museum, now the Art and History Museum, and the other in the King Baudouin Foundation, both in Brussels), has the linked chain replaced with the silk ribbon and his head is uncrowned. A terracotta maquette for this second version, which appeared on the art market in 2016, may be the work of Gauron, who was updating the earlier model. During the Seven Years War, it may have been more appropriate for the sovereign to be depicted wearing the order on a ribbon with his field uniform rather than on the impractical chain.[vi] A second version of Maria Theresa of Austria, in which she is older and wears a stiff lace cap and cravat or scarf, may have been made when she became a widow in 1765: an example is at Versailles.

A Tournai bust of Charles of Lorraine, the younger brother of Francis I, depicts Prince Charles Alexander of Lorraine (1712–1780), is probably contemporary with our version of Francis I, and is probably the bust described as ‘Son Altesse Royale’ in 1756 made by Gilis, documented in an exchange of letters between Madame Peterinck and the Graaf van Cobenzl, who acquired a Tournai figural group in 1754.[vii] An example is in the Musée Royal de Mariemont, in Belgium (Ac.2005/16).

Condition:
No restoration, firing cracks and losses to extremities