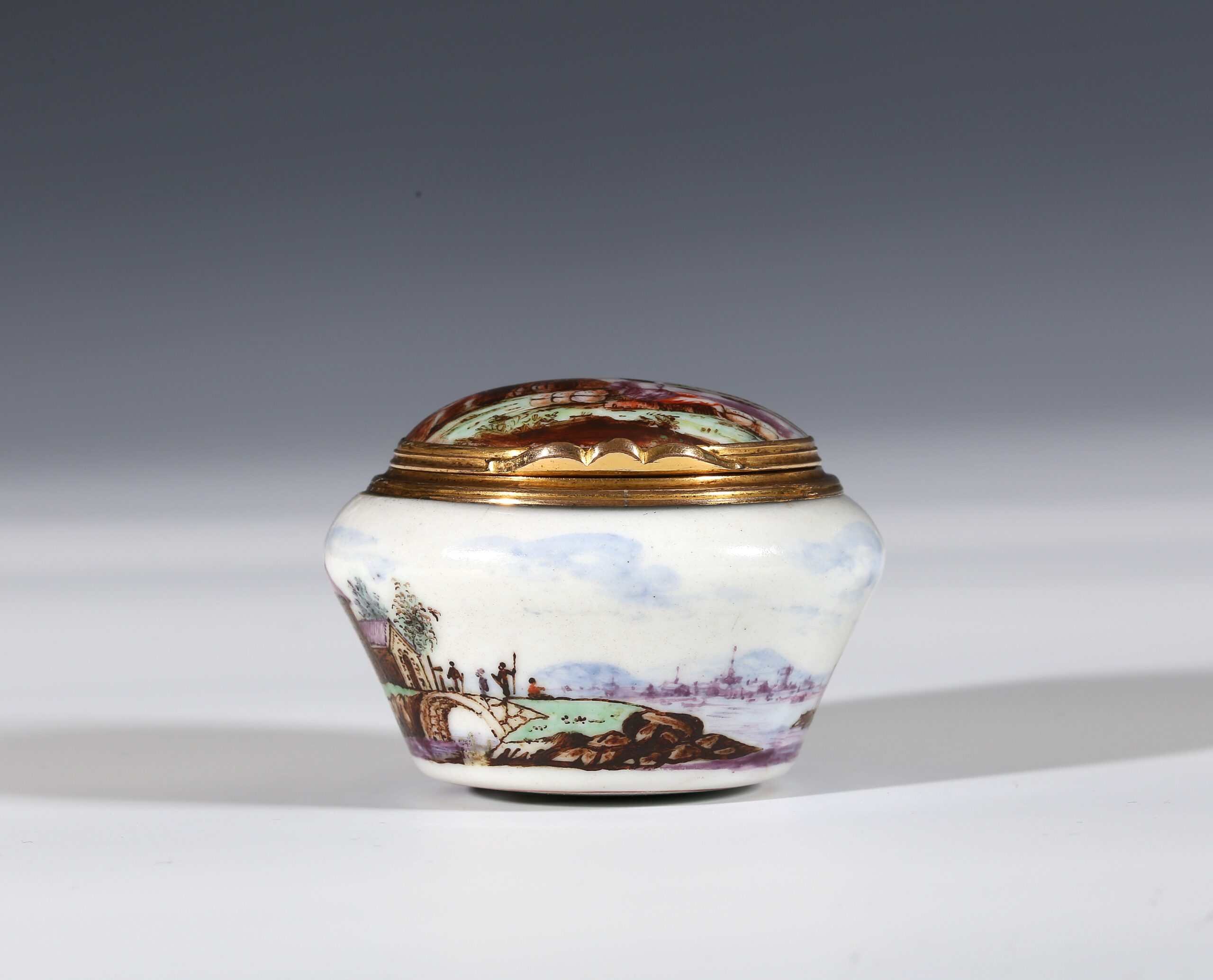 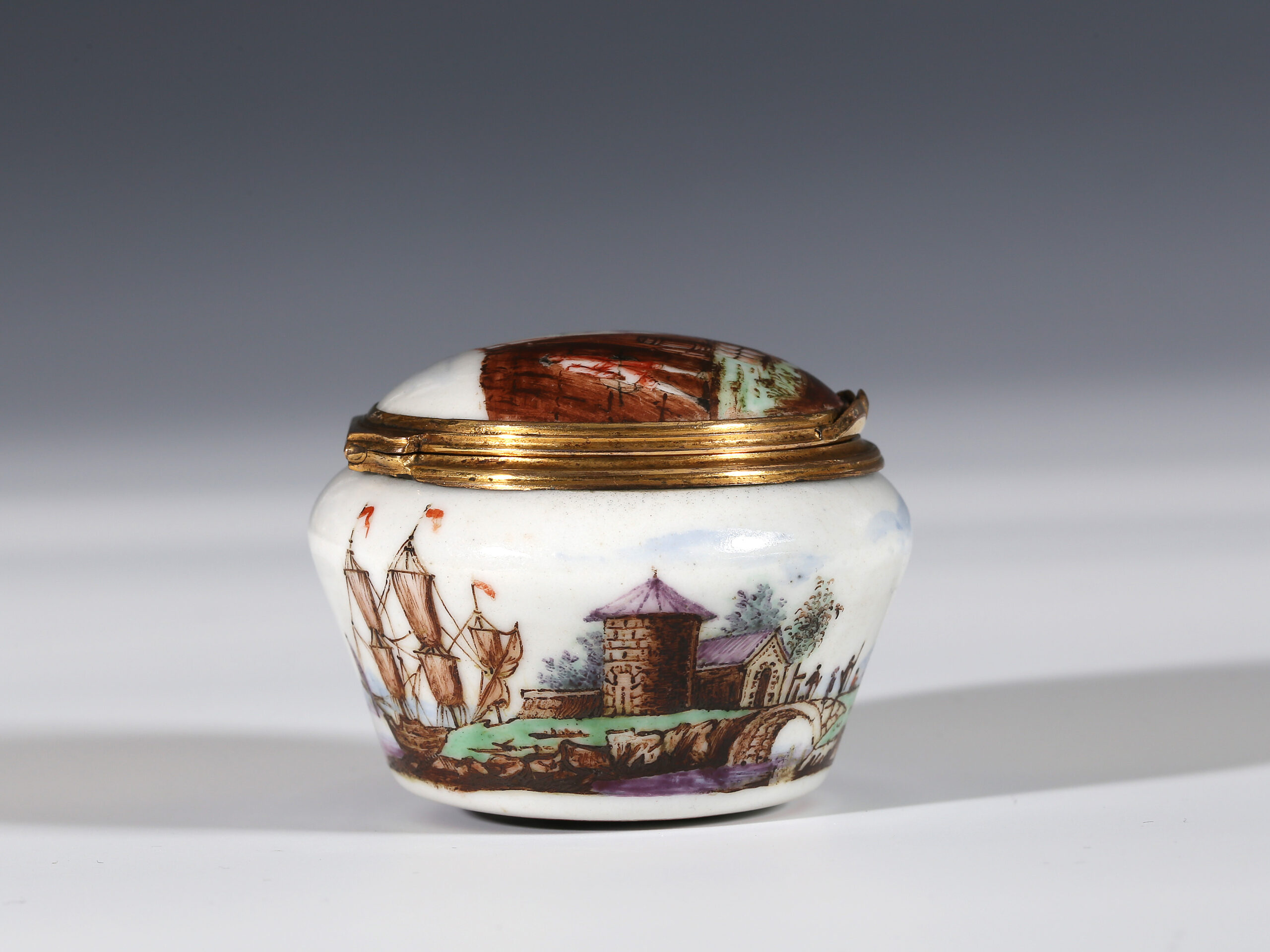 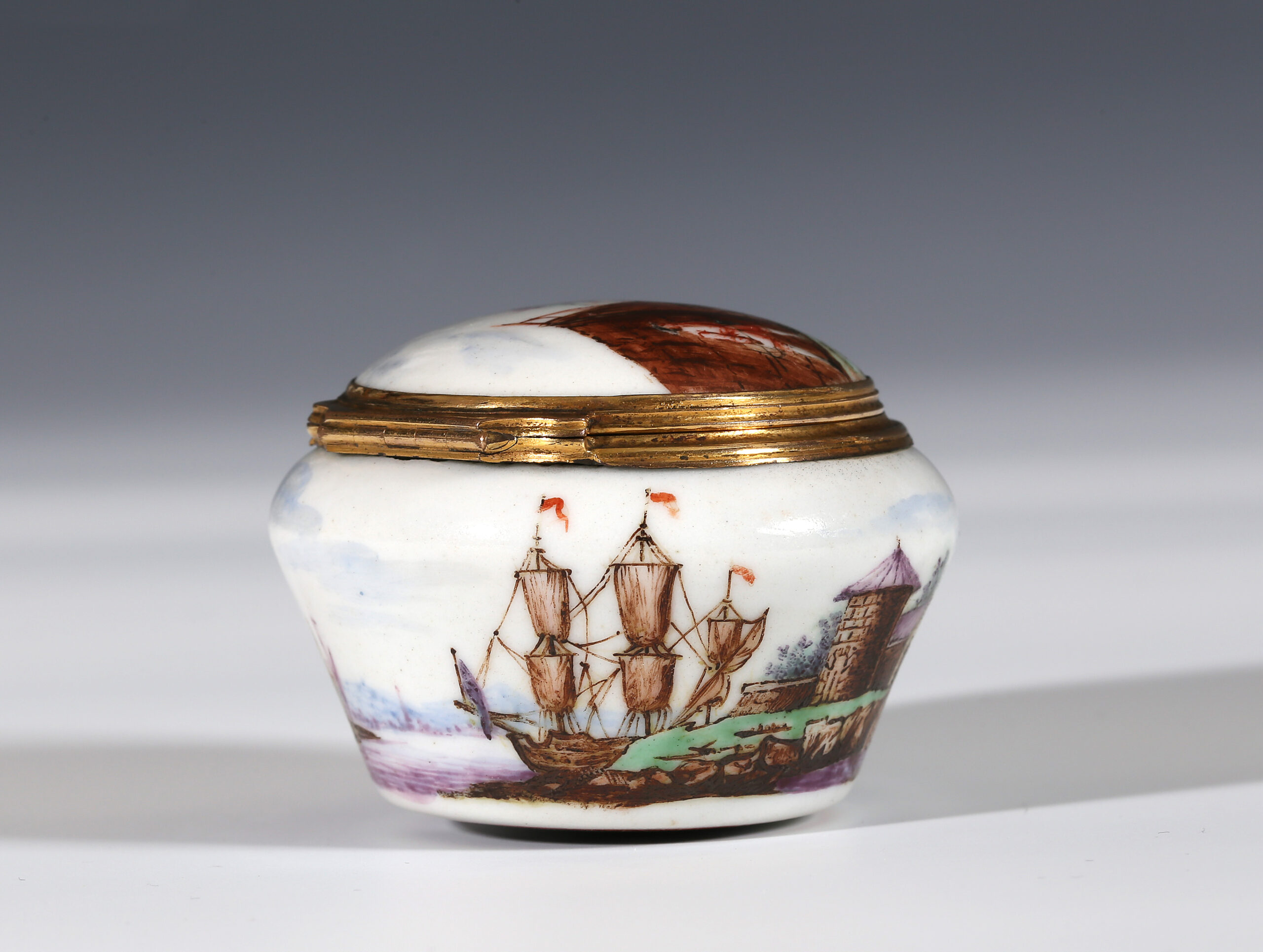 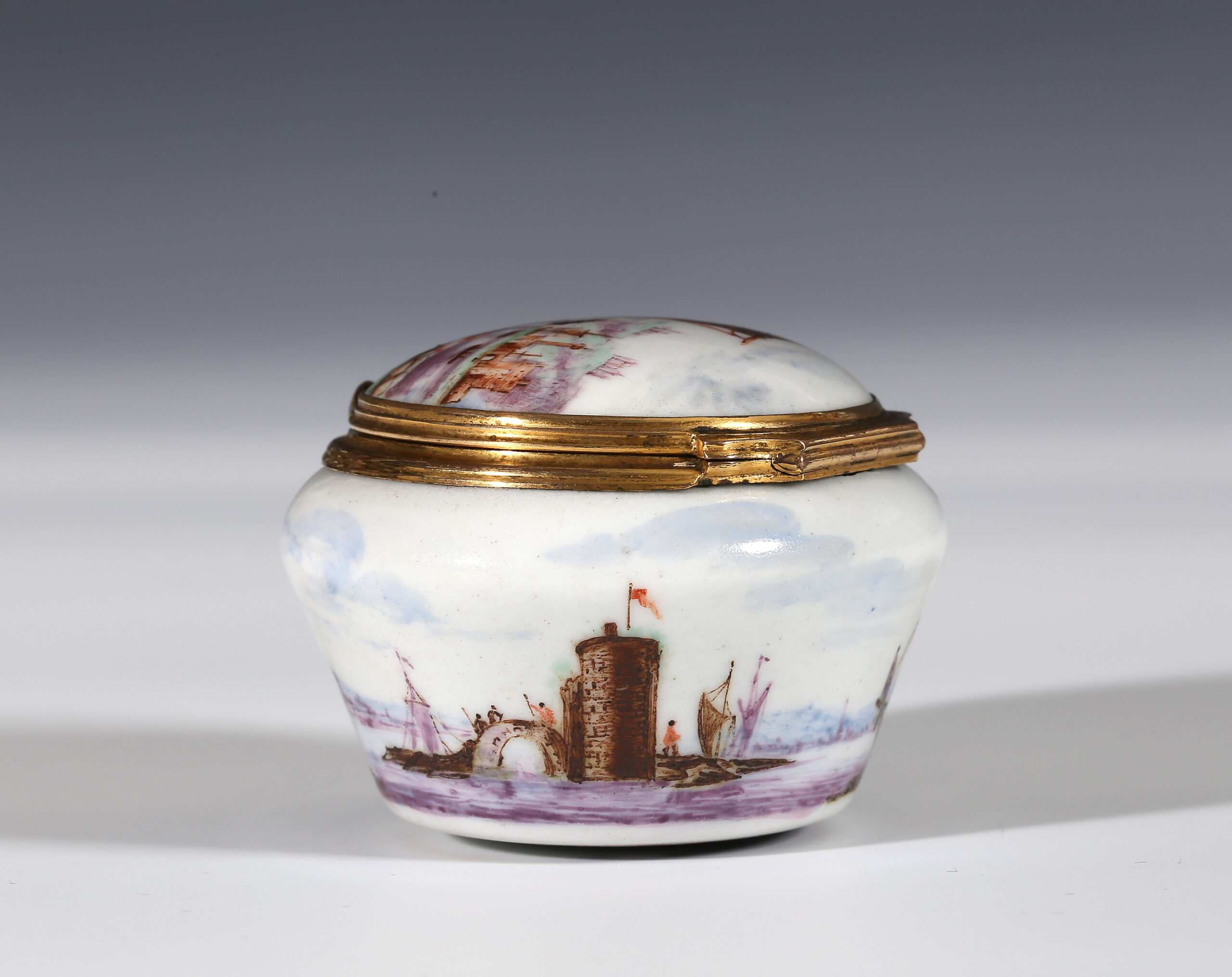 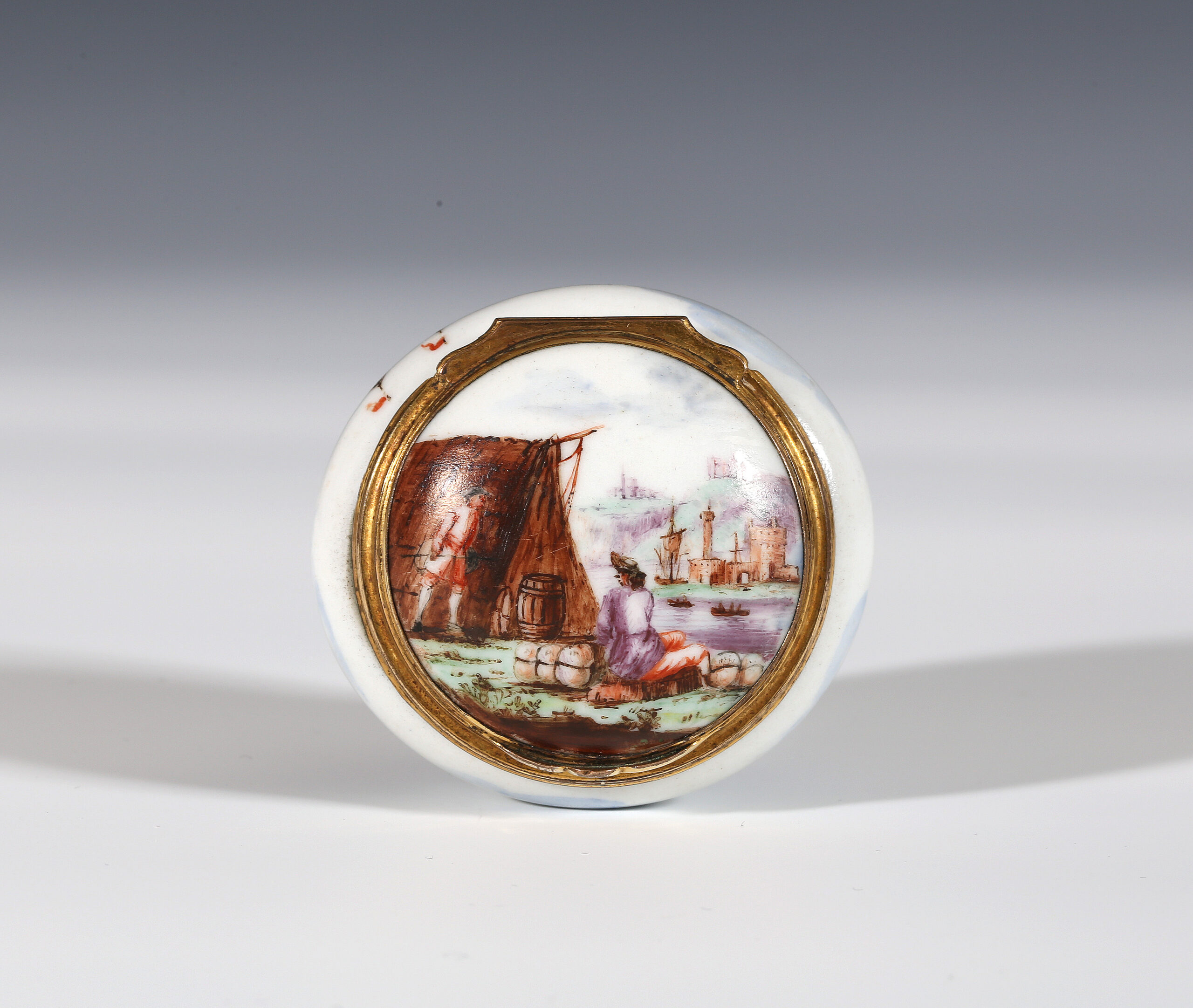 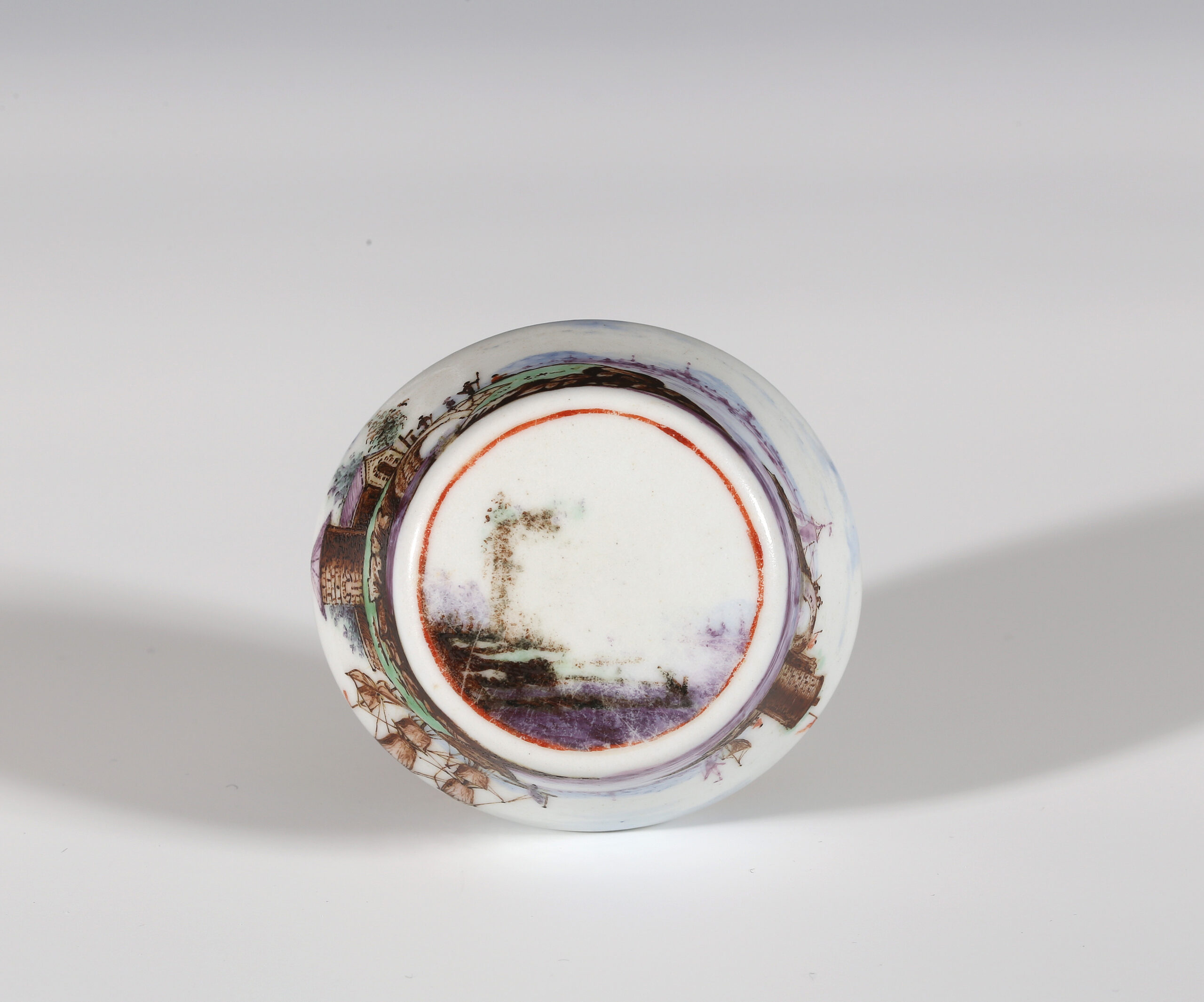 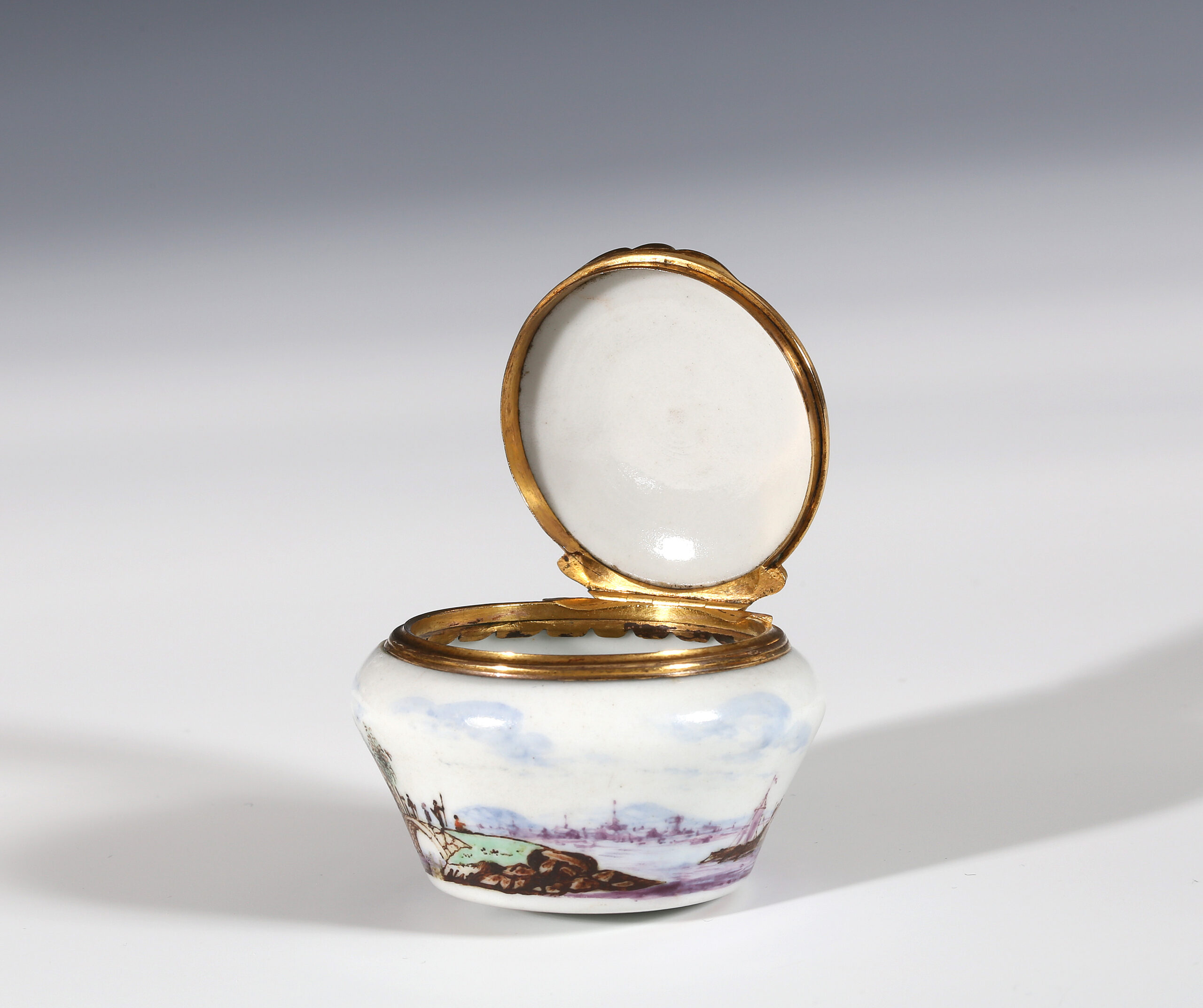 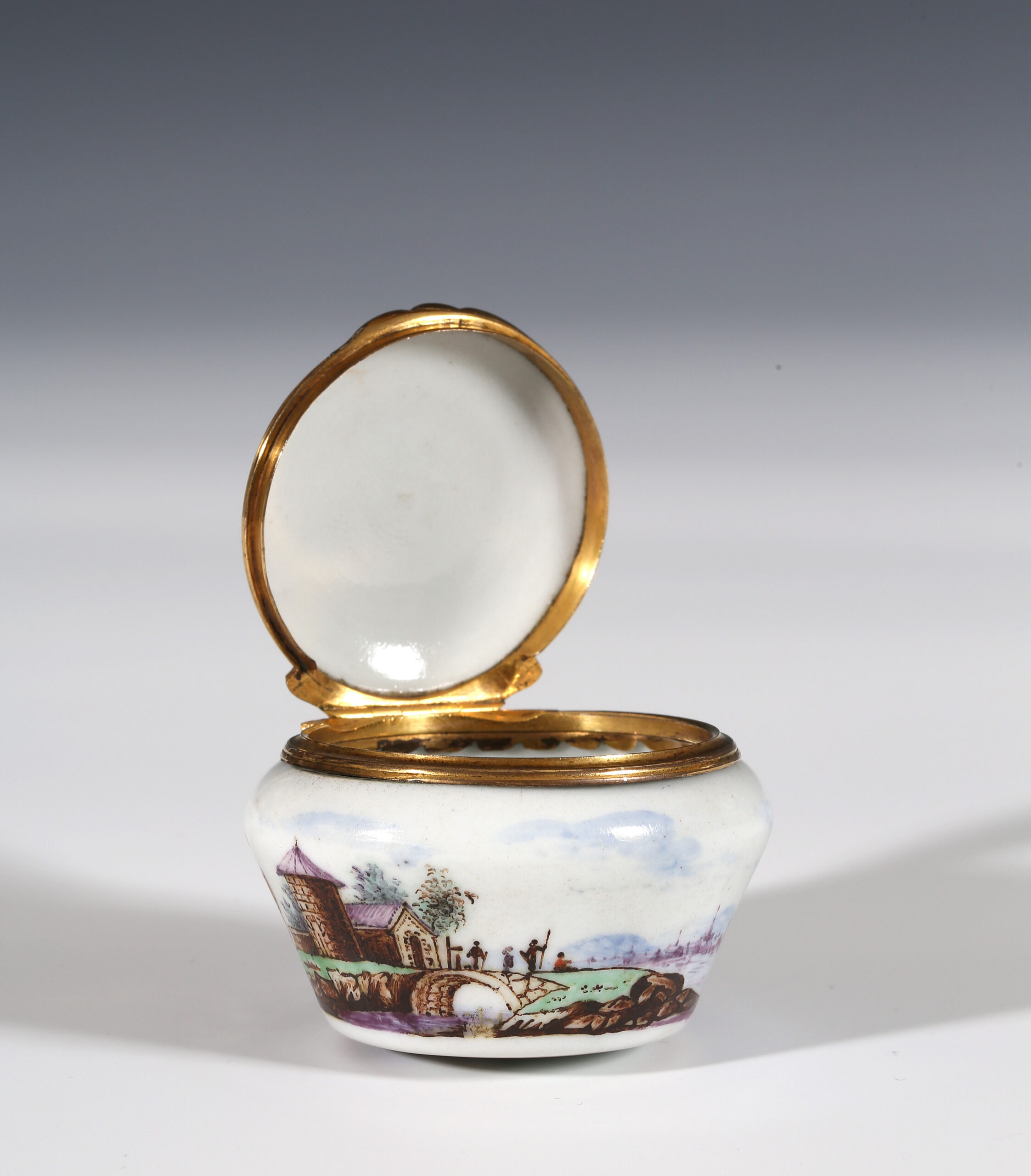 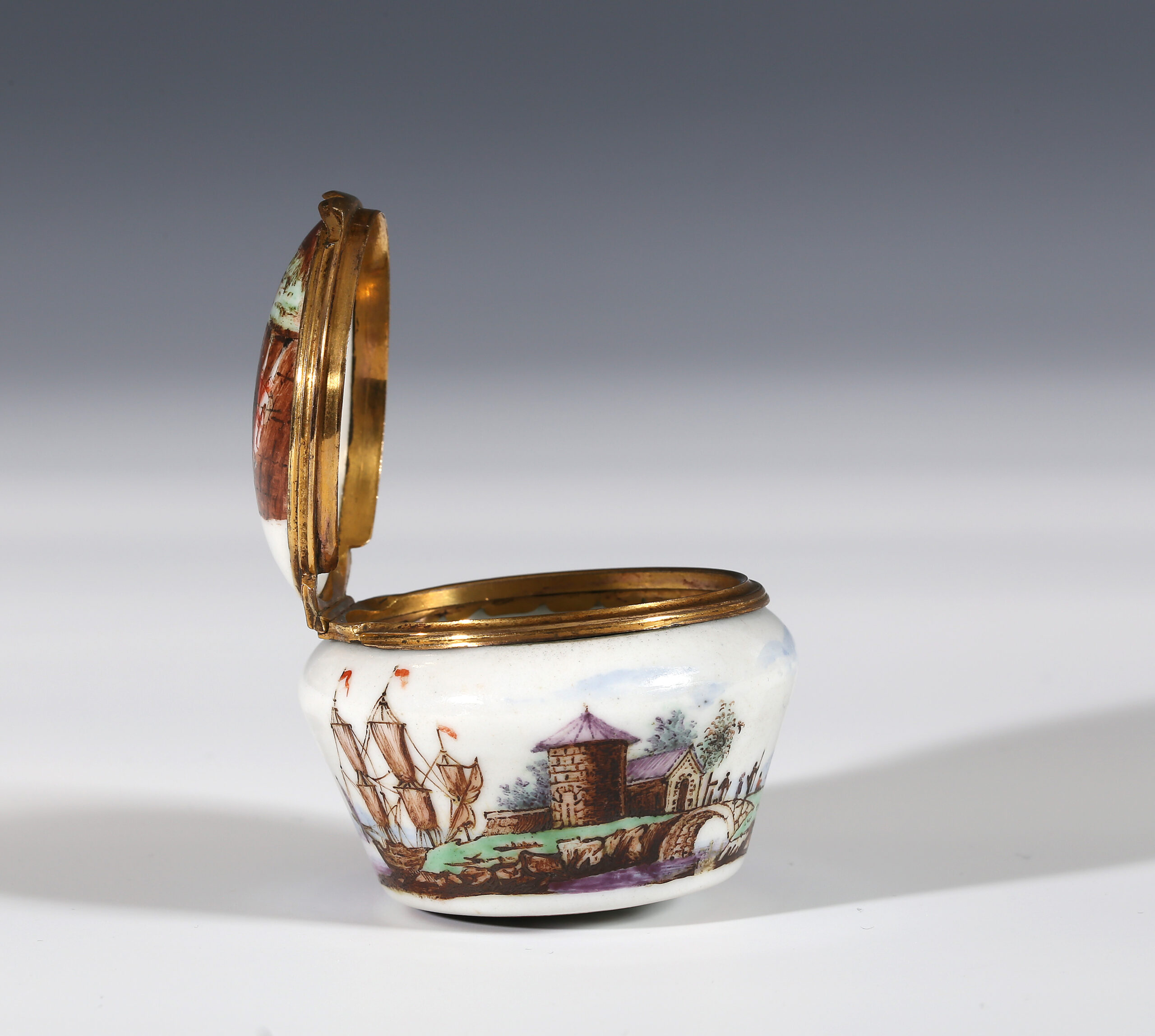 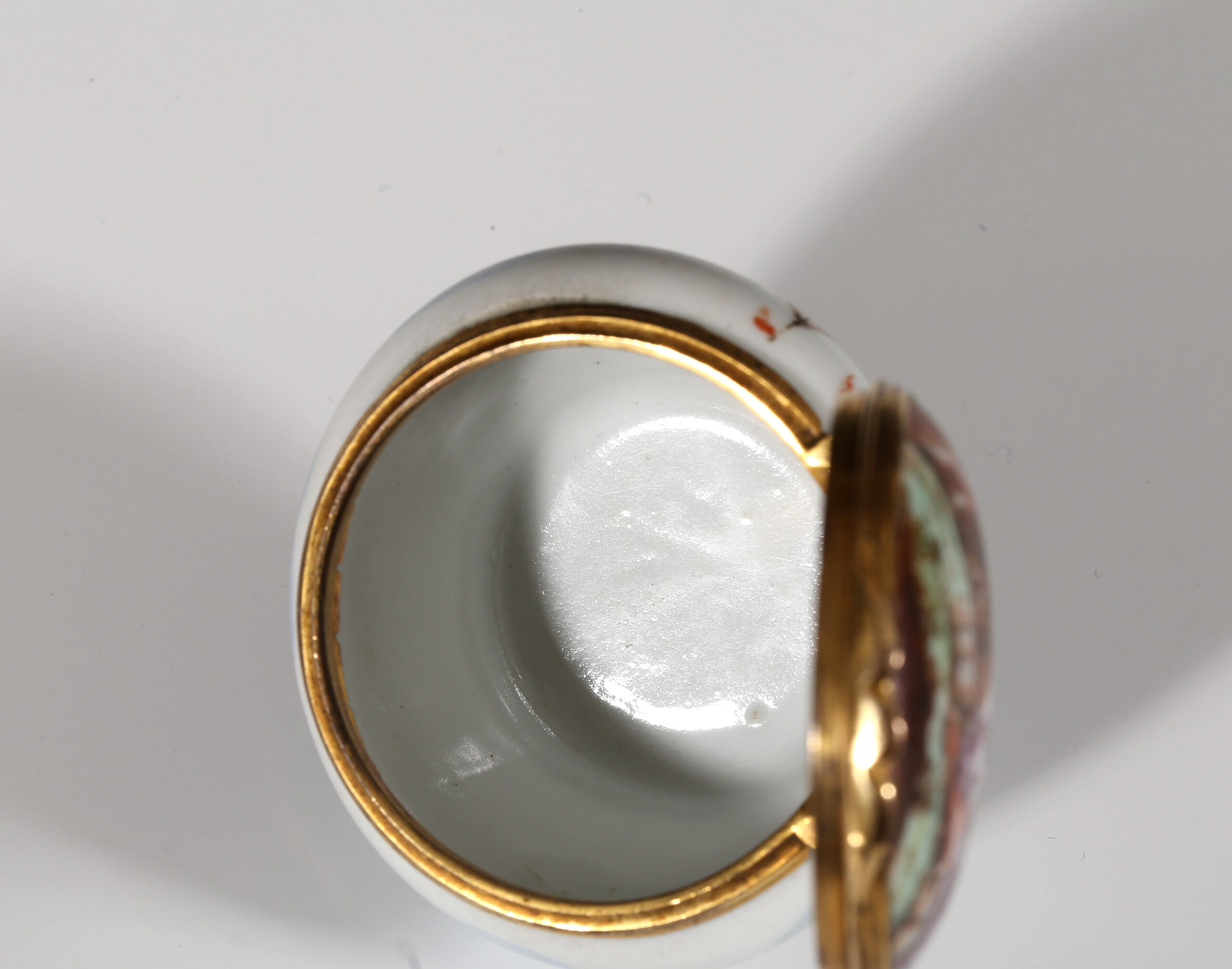 “…The material is an earth, the produce of the Chirokee nation in America, called by the natives unaker.”
Thomas Frye and Edward Heylyn’s patent of 6th December 1744.

This is one of three known boxes that can be attributed to the ‘A’-marked group. All are of near identical form and size with the same gilt-copper hinged mounts.

This rare group of porcelains, consisting of around forty known pieces, has long intrigued ceramic scholars. The hardness of the body once led some to suggest a continental origin but a paper by R.J. Charleston and J.V.G. Mallet in 1971, A problematical group of 18th century porcelains, established that it was British. A scientific study published by Ian Freestone of the British Museum in 1996 identified the use of a primary kaolinic clay and suggested the connection with the patent taken out on 6th December 1744 by Thomas Frye and Edward Heylyn. This patent, sometimes referred to as ‘The first Bow patent’, specified the use of a clay “an earth, the produce of the Chirokee nation in America, called by the natives unaker”.

A further paper by W.R.H. Ramsay, A. Gabszewicz and E.G. Ramsay in 2001 and another in 2003, The chemistry of ‘A’-marked porcelain and its relation to the Heylyn and Frye patent of 1744, established this connection and showed that it was a high fired hard-paste porcelain which precisely replicated the 1744 patent. Ramsay confirmed this by firing samples from clay from the Iotla mines near Franklin in south-west North Carolina, which proved to be extremely close to ‘A’-marked porcelains.

Frye was a talented artist and Heylyn a merchant with shipping interests to the American colonies, but neither had previous experience of making porcelain, let alone a true hard paste. They must have acquired the materials and technological skills from someone else. This might have been the Savannah stoneware potter Andrew Duché who claimed to have found the materials required to make hard-paste or ‘true’ porcelain as early as 1737 in western North Carolina and we have tantalising records of his early trials. General Oglethorpe the founder of the Georgia colony wrote to the Trustees in London in October 1738 “an earth is found which Duché the potter has baked into Chinaware”. The local secretary Colonel Stevens wrote in 1741 that Duché had succeeded in making porcelain and “I saw a little piece, in form a tea-cup,..which had passed through one baking, and was yet rough; but upon holding it to the light… I thought it as transparent as our ordinary China cups commonly are”.

We know that Duché came to England on 26 May 1743 and the Registers of the Inspector-General of Imports and Exports, covering the period 1st January to 25th March 1743/44, record the importation of 20 cwt of clay from Carolina to the Port of London.

The three known boxes are each decorated differently. Our box is painted with merchants and ships in harbour scenes in the Meissen ‘Kauffahrtei’ style. Similar decoration of castellated towers, casks and barrels by the same hand is also found on the cover of the box in the National Museum of Wales, Cardiff (NMW A 34692). The third box, discovered by Stockspring Antiques in 2012, is painted with a butterfly and fruit.

All three boxes use the same basic palette of brown, green, purple, blue, yellow and iron-red to different effect. The Cardiff box has an indistinct incised mark that has been read as an ‘A’, our box seems also to have a faint incised mark. Elements of the decoration, decoration link these boxes to marked ‘High Style’ tea wares of the ‘A’-marked group. The term ‘High Style’ was invented by Charleston and Mallett to differentiate the more painterly wares of the group from the simpler stock patterns.

The treatment of the iron-red rococo scrolls and lion head mascarons on the Cardiff box can be matched closely to the cartouche scrolls on two ‘A’ marked teapots in the Victoria and Albert Museum and are certainly by the same hand. These scrolls and mascarons follow closely the borders in the engraving by Bachelet after Gravelot of Le Jeu de la Crosse and in the engraved sheet ‘The Second part of Youthful Diversions, published according to Act of Parliament 7th may 1739..’, which are the source for other ‘A’ marked wares[i]. 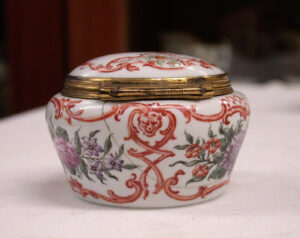 The bunches of fruit on the box in a private collection match the fruit falling from the cornucopia on the unique cane handle in the V&A.  The iron-red shell and small figures on the cane handle, in turn, can be closely linked to the above teapots.

Our box was once in an Italian collection acquired through the Rome dealers Lukacs-Donath in 1966, who often bought in London. It was then mistakenly published as Doccia[ii], the paste does bear some similarity. It was correctly identified by Nette Megens of Bonham’s, London, in 2011, as belonging to the ‘A’-marked group because of its close similarities with the Cardiff box. Tests carried out then by Kelly Domoney and Prof. Andrew Shortland of Cranfield University with a SEA6000VX mapping XRF, confirmed that it matched the Cardiff box and differed from Doccia.

The Cranfield analysis looked particularly at the enamels which are rich in lead oxide rather than the bare glaze itself. This led to some confusion around the idea that the glaze itself might contain high levels of lead and differ from other known pieces of the ‘A’- marked group[iii].

On the advice of Dr Ramsay, we were able to arrange an analysis by Dr Ashley Howkins at Brunel University, using Energy Dispersive Xray analysis with a scanning electron microscope. This technique allows for an analysis of very small areas, and it was found that there was no significant lead in the glaze itself. We were also able to get an analysis of the body at an exposed area of the rim near the edge of the mount, this confirmed that the box has a high-fired Si-Al-Ca body composition which suggests that it contains a china clay such as unaker. The glaze too, is of the high-fired Si-Al-Ca type confirming that it is consistent with other analyses of ‘A’-marked porcelains. This will be the subject of a forthcoming paper.

It can be argued whether it was made either at the property acquired by George Arnold and Edward Heylyn in Bow, Middlesex, in 1744 or at the new site of the Bow factory on the Essex site of Bow Bridge. The discovery of one glazed teapot lid on the Essex site which conforms to the composition of A-marked porcelain lends weight to its production there.

Condition:
Wear to enamels on the underside of the box

References:
Hugh Tait, ‘Bow porcelain, 1744-1776 : a special exhibition of documentary material to commemorate the bi-centenary of the retirement of Thomas Frye’, Oct. 1959-Apr. 1960 (catalogue: The Trustees of the British Museum, 1959)