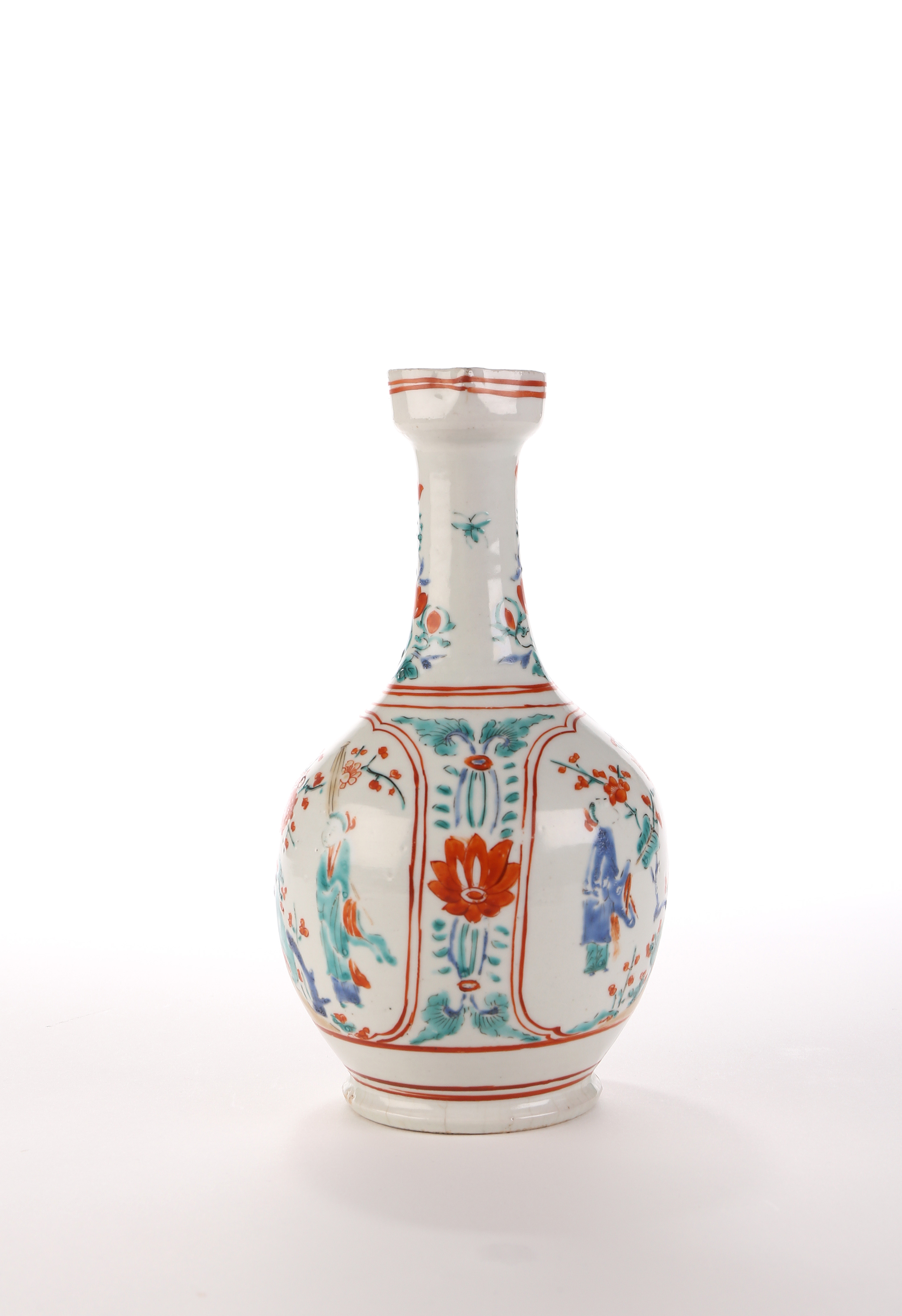 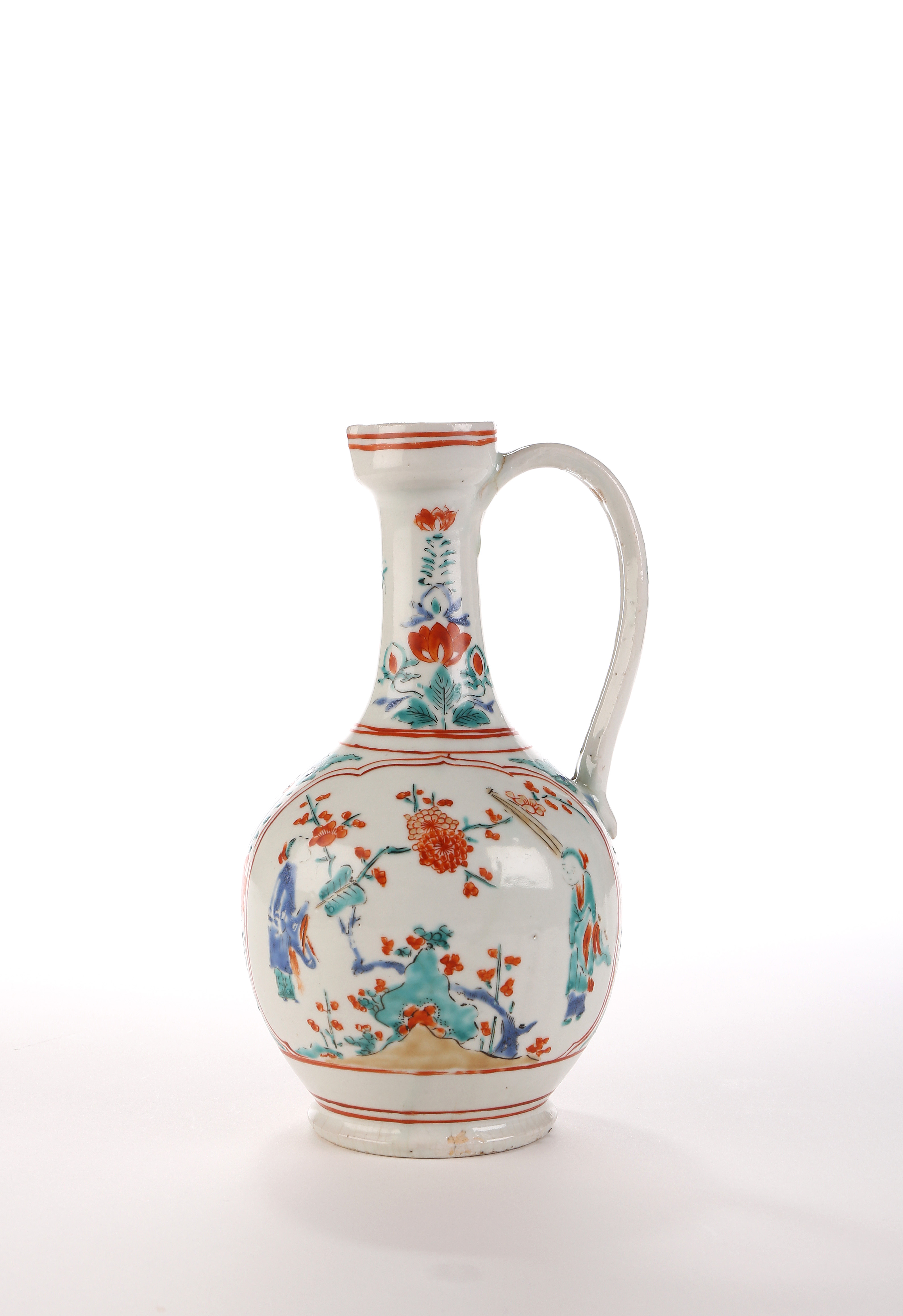 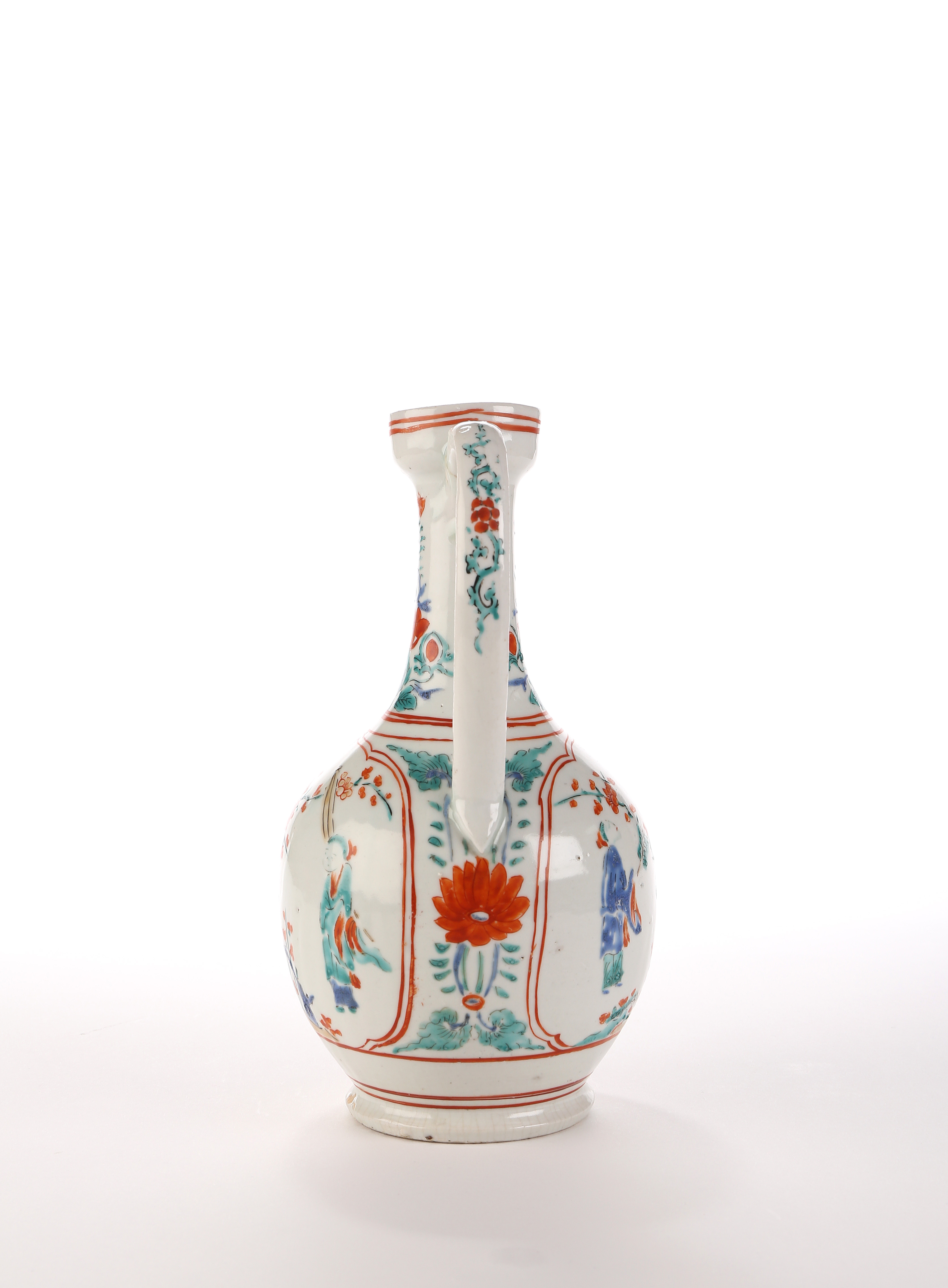 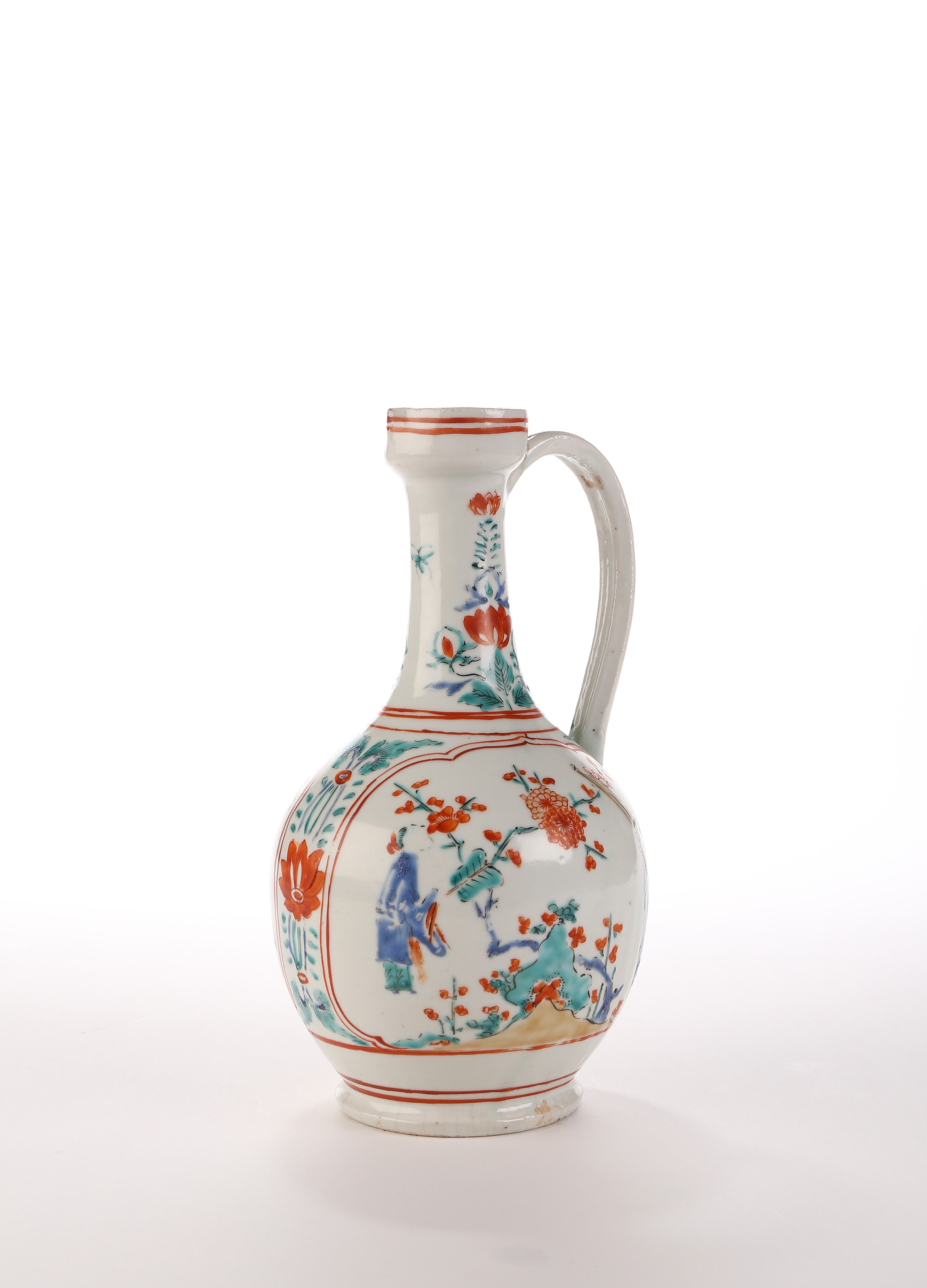 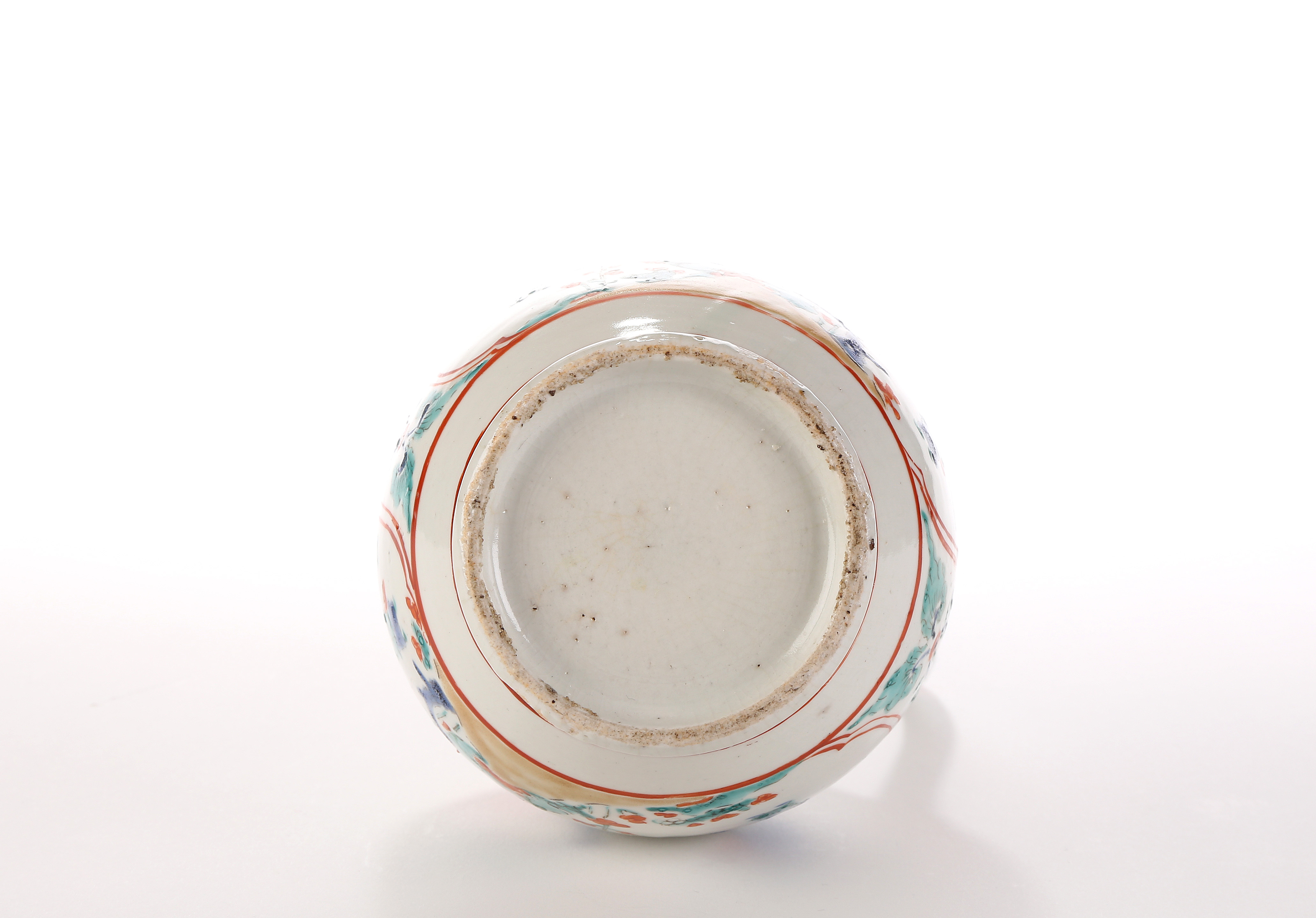 The oviform body with slender neck and loop-handle decorated with two lobed panels of boys holding a fan and a parasol by prunus issuing from rockwork, divided by lotus motifs.

This is an early example of a European form made to order for the Dutch East India Company. The top of the handle is pierced to allow it to be mounted in Europe.

The mature Kakiemon palette of blue, turquoise, iron-red and yellow with swiftly drawn outlines in black, but no gilding on a slightly low-fired, crackled glaze is characteristic of the early phase of such export wares. It is not clear whether these pieces were made by the actual Kakiemon kilns or others nearby.

Christiaan Jorg mentions that Kakiemon-style pieces imitating European shapes are remarkably rare at this period, despite this the form was copied fairly precisely in Meissen around 1730.

Condition:
Crack to the top of the handle, presumably from firing, faint original cracks to the foot, no restoration

References:
A nearly identical, but slightly smaller example (20.5 cm high) is in the British Museum, Franks.1036, and Illustrated in Porcelain for Palaces, Oriental Ceramics Society, 1990, No. 100
Another nearly identical, but slightly smaller example (21ncm high without lid) is in the National Museum of Ethnology Leiden (3304-01) illustrated in Christiaan J. A. Jörg, Fine & Curious: Japanese Export Porcelain in Dutch Collections, p. 74, no 60