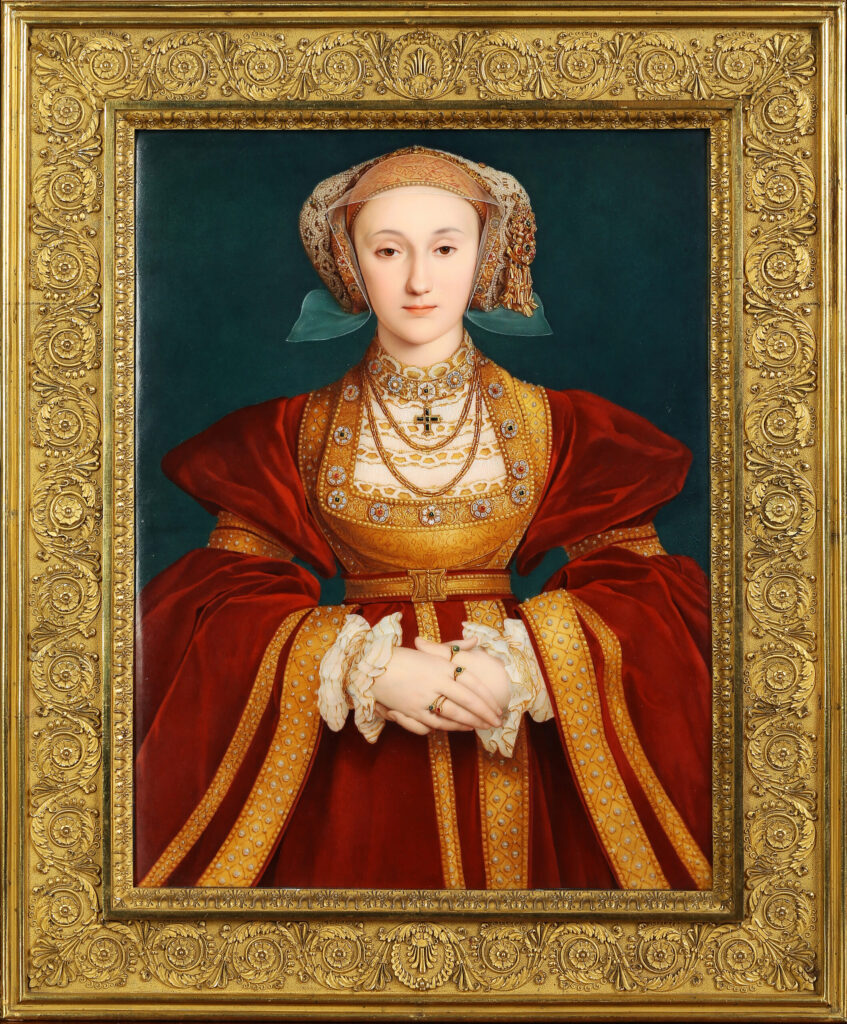 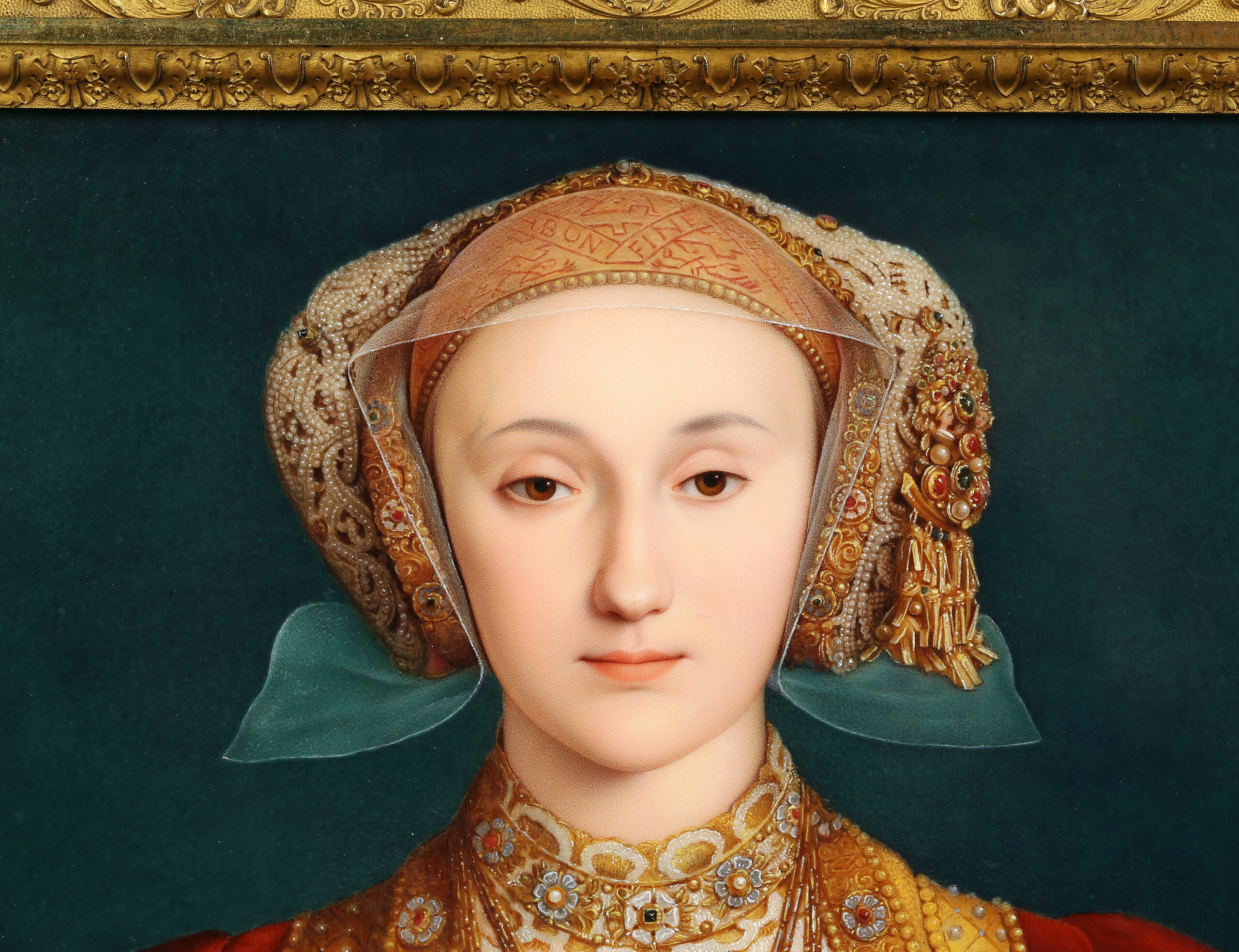 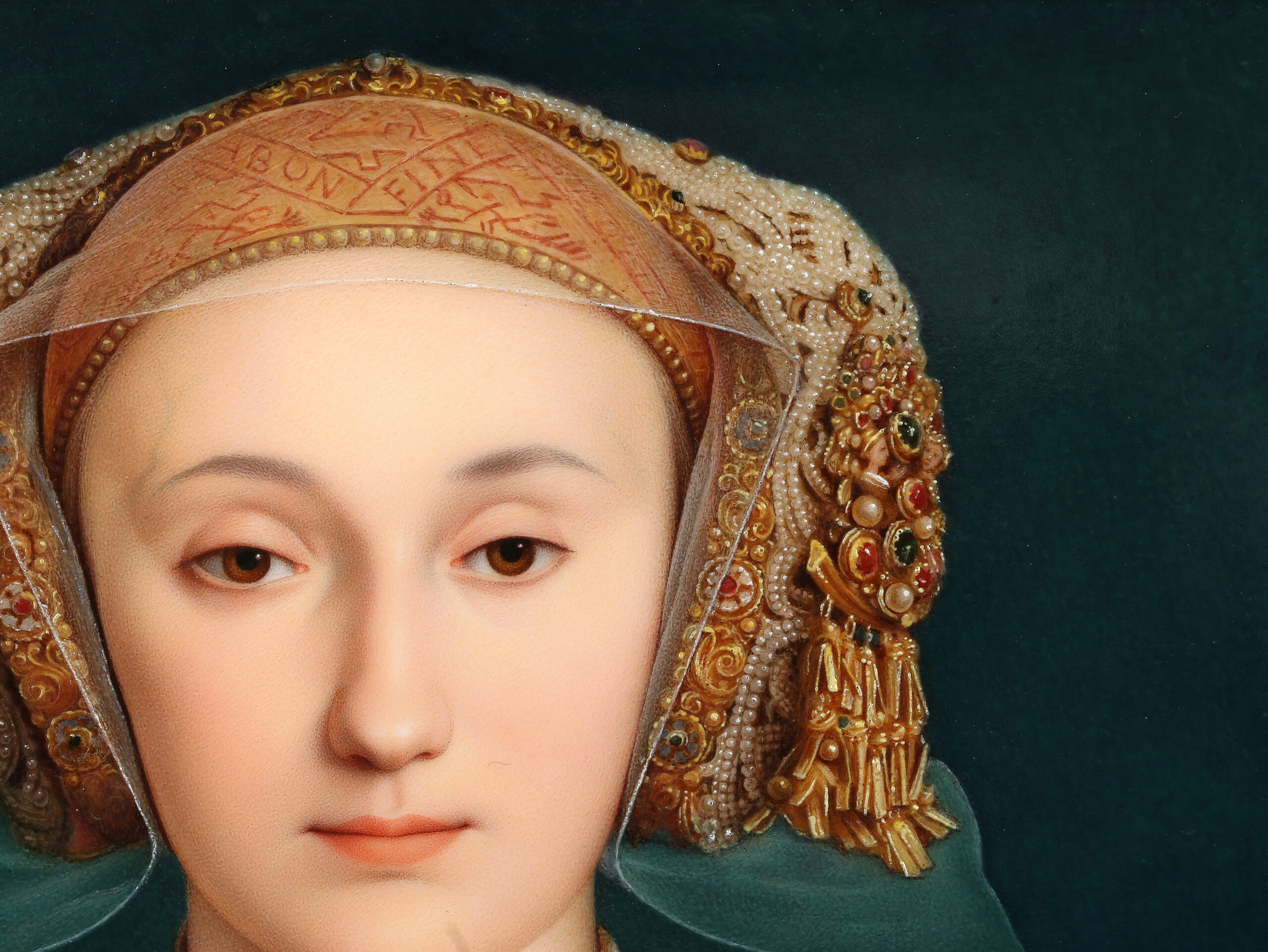 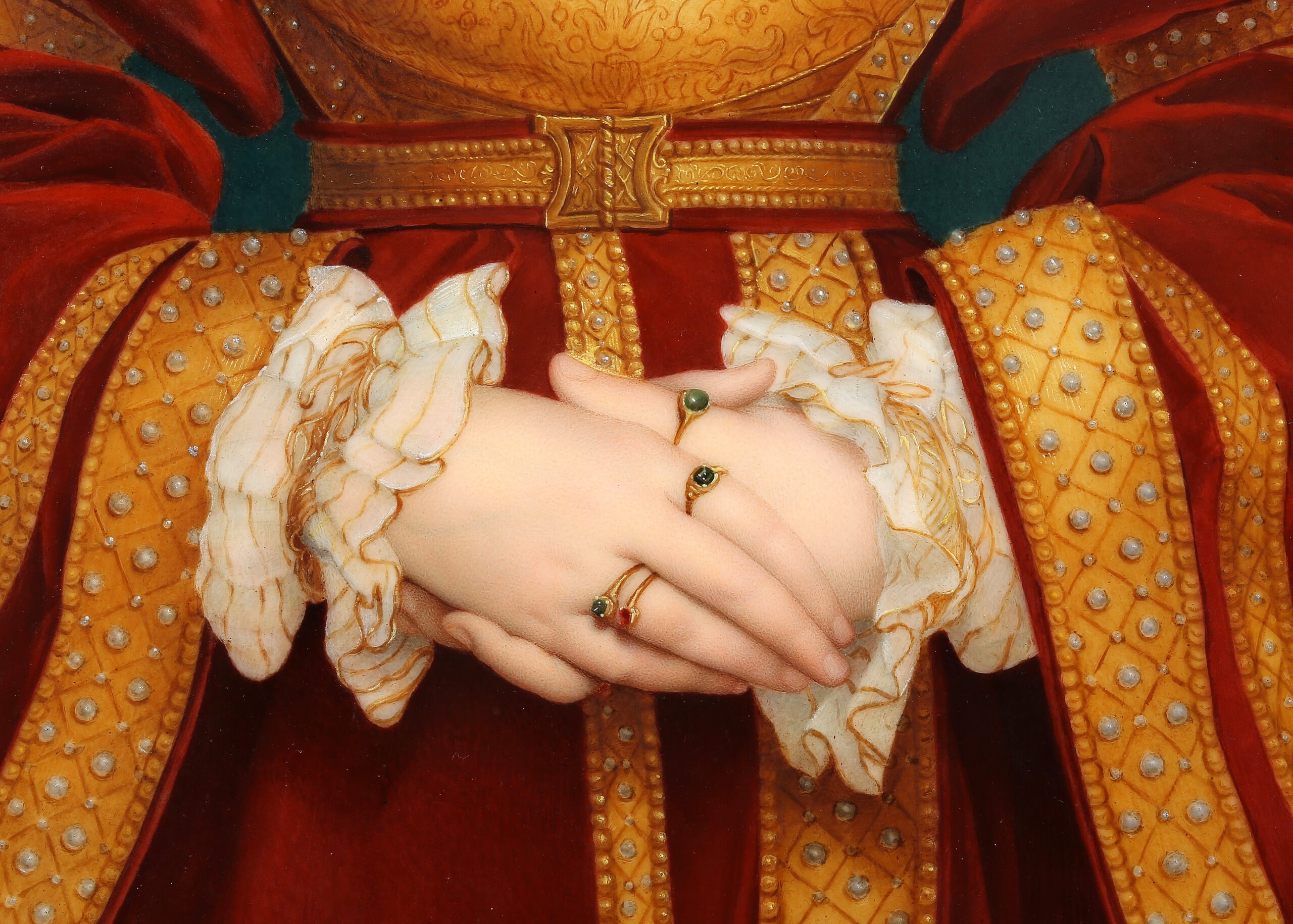 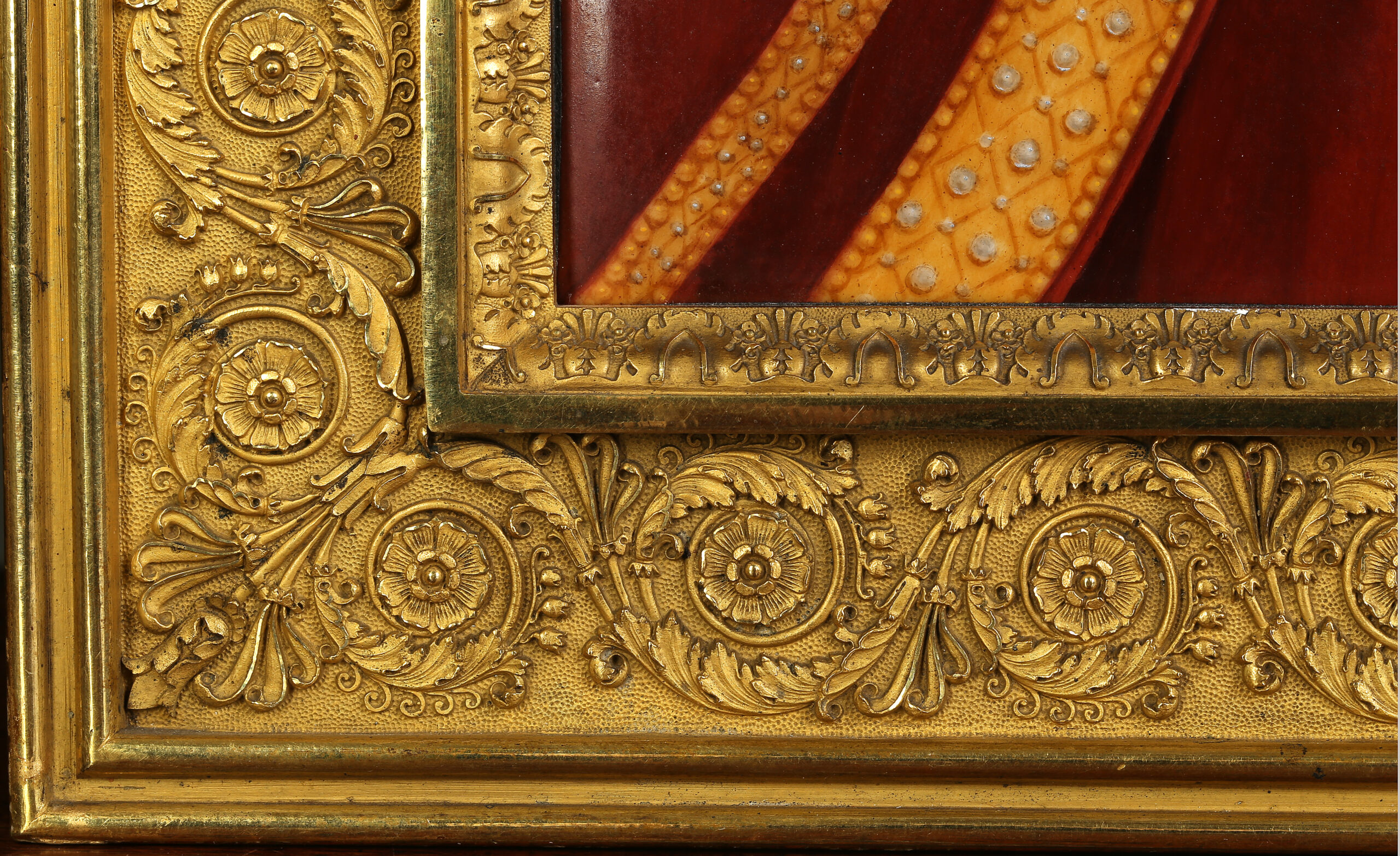 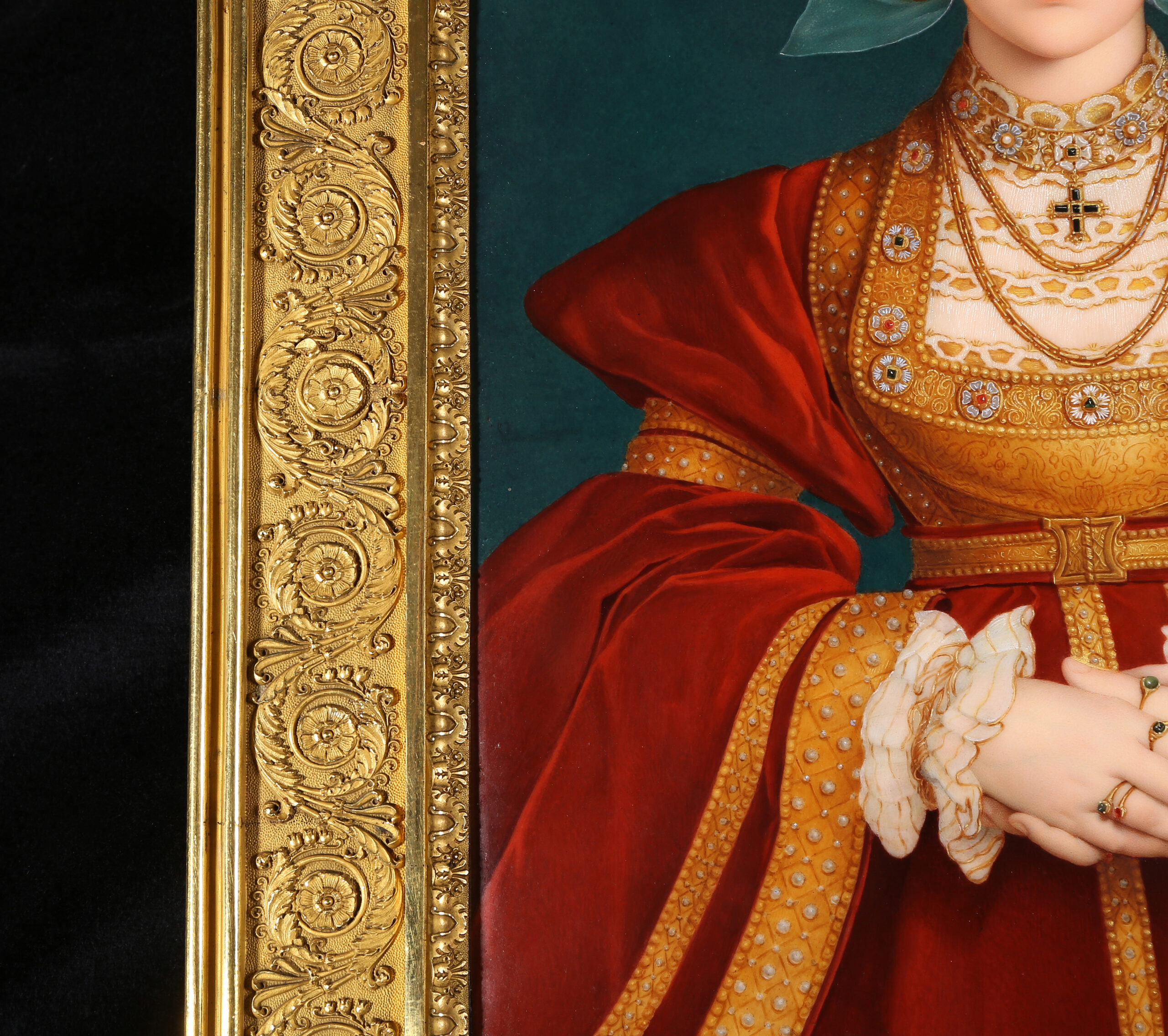 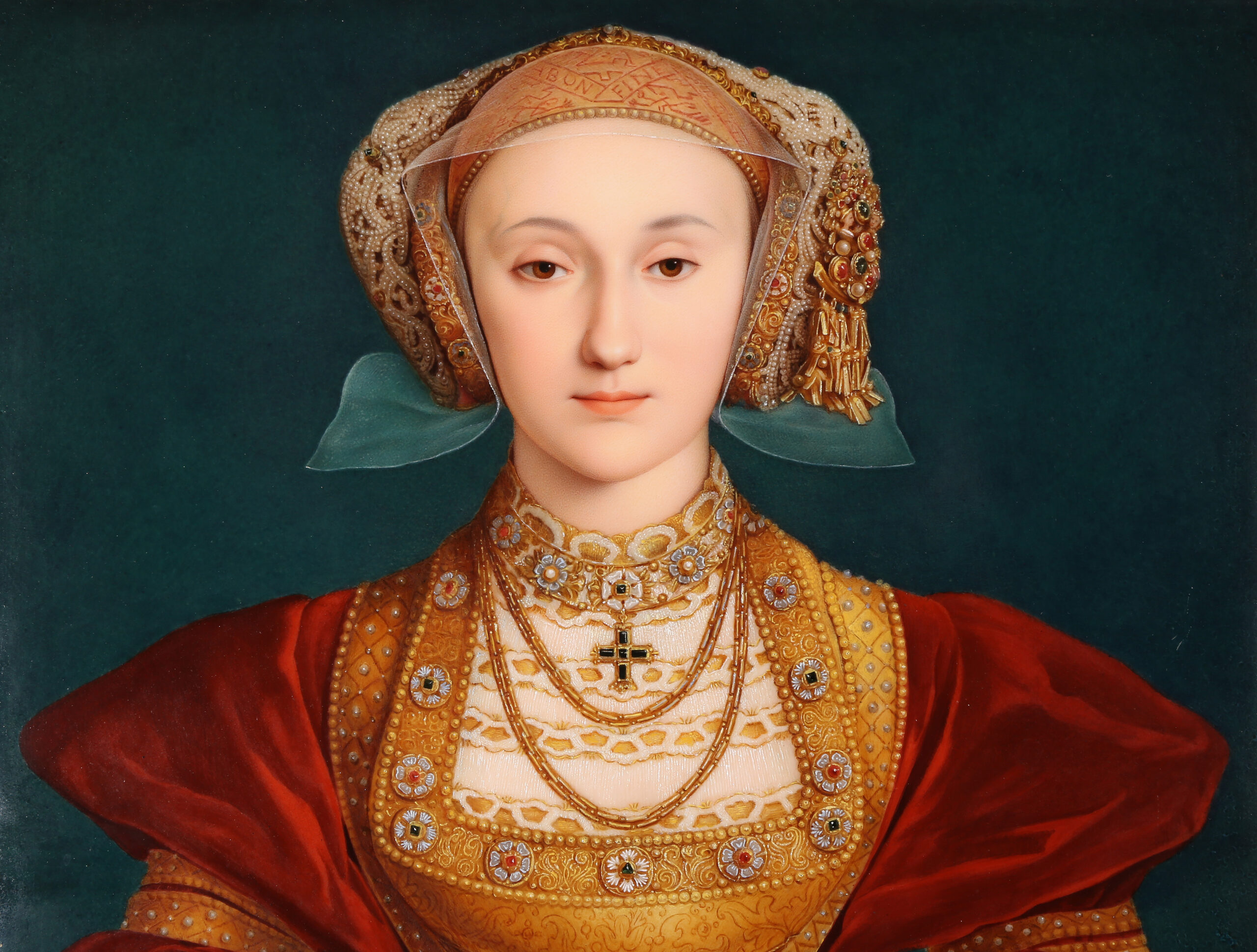 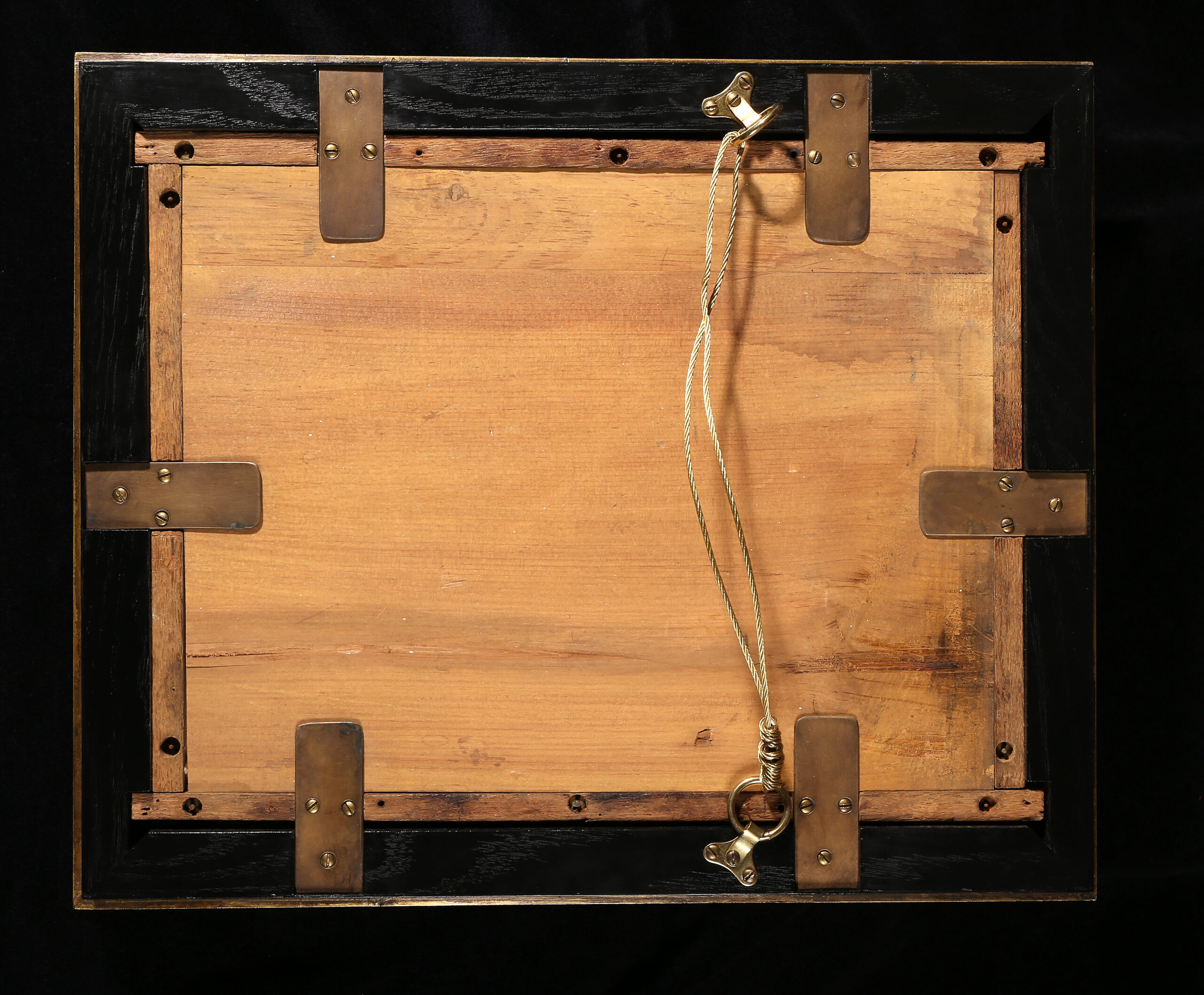 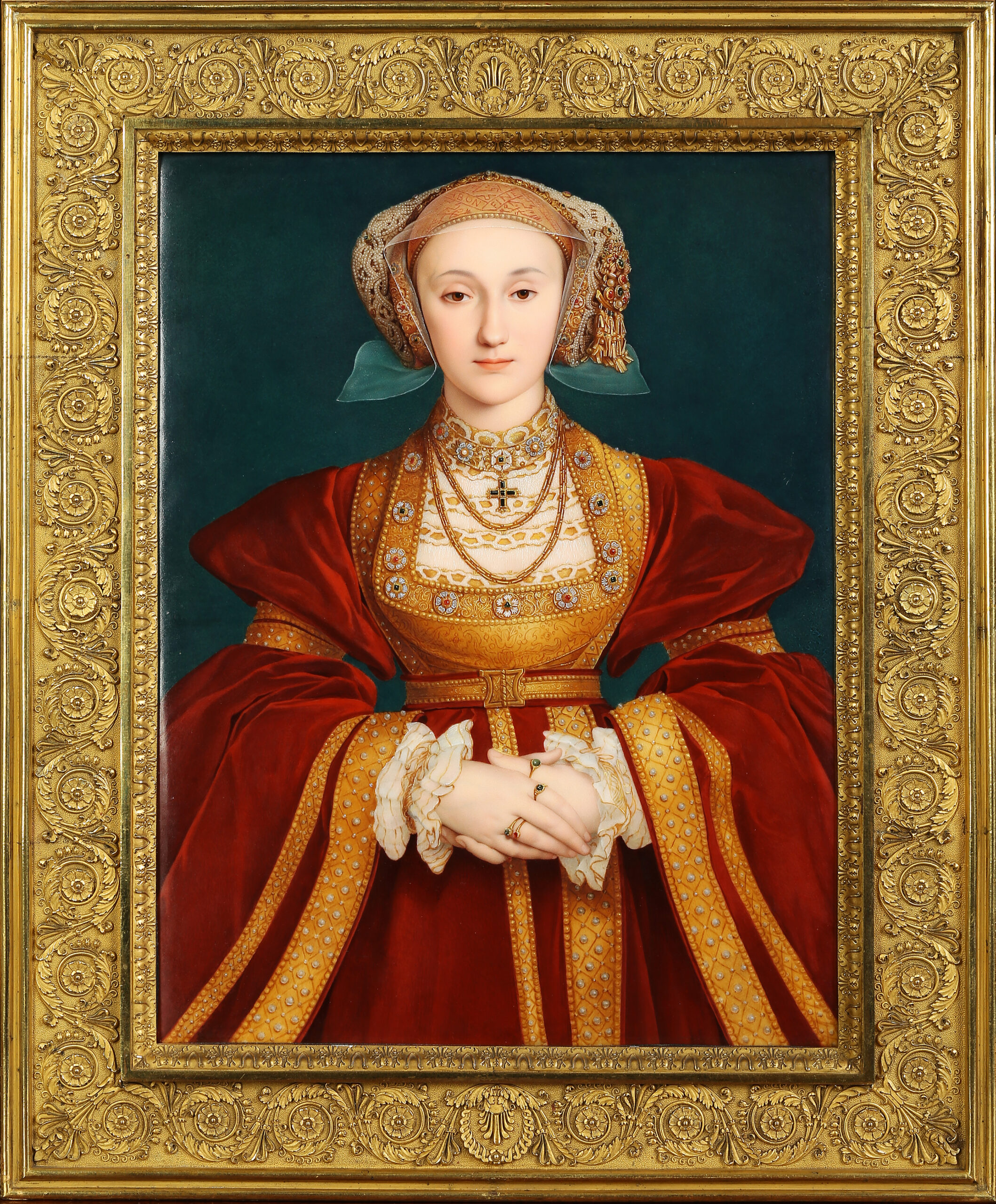 In 1826 Marie-Victoire Jaquotot referred to this plaque as an example of a perfect firing and Alexandre Brongniart, the director of Sèvres, described it as one of her masterpieces (Lajoix, p.134). It emerged from the muffle kiln at Sèvres on the 6th of April 1825 and was exhibited at the Paris Salon of 1827 in the gilt-bronze frame specially designed for it.

In the Journal des Artistes, Alexandre Lenoir, notes its presence at the 1827 exhibition: “Next comes the portrait of Anne de Boulen, which she imitated from the famous Jean Holbein, …. In this perfect imitation of the German painter, we admire the freshness of the colouring, the accuracy of the drawing and the impassive expression of the unfortunate victim of the English despot. One notices the vivacity of the eyes, the beauty of the hands, as well as the perfection of the handling of the brush and the precision of the details de toilette, the finish of which is extraordinary (The original is in the King’s Museum)”[1].

The Holbein of Anne of Cleves in the Louvre had been wrongly described as being of Anne Boleyn (who Holbein never painted). It was in fact the famous portrait that Holbein made when he was sent to the Duchy of Cleves to paint Henry VIII’s prospective fourth wife. Henry famously was unimpressed on finally meeting Anne, they did marry but were divorced six months later yet remained close friends. The portrait was acquired by Louis XIV from the estate of the exiled Thomas Howard, Earl of Arundel (1585-1646).

Combining artistic and entrepreneurial skills Jaquotot became one of the best paid artists of the early 19th century. She was paid 20,000 francs for the partial reproduction of François Gérard’s ‘Corinne au Cape Misène’, while Gérard himself had only been paid 18,000 francs for the original (Harkett p.169). She worked directly for Napoleon and Charles X and was appointed ‘Premier peintre sur porcelain du Roi’ under Louis XVIII. 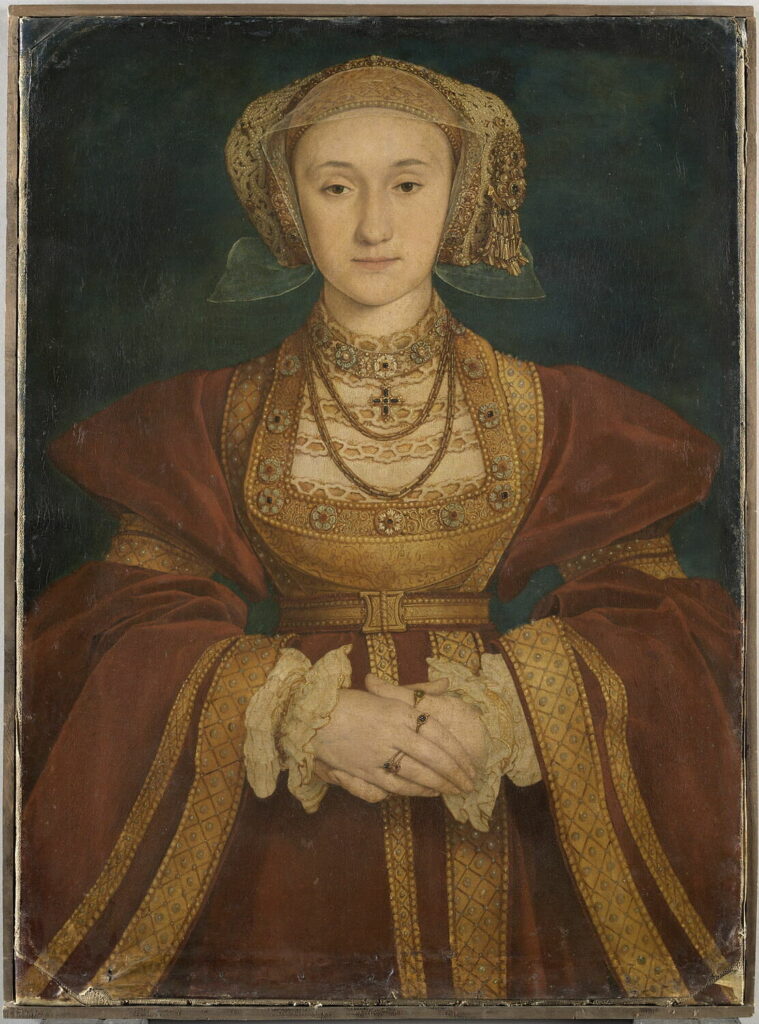 Jaquotot was the leading artist in a project to preserve great masterpieces of the past for posterity in the immutable medium of fired porcelain, to this end she was sent to Italy to copy paintings by Leonardo and Raphael. With this plaque, she was not simply trying to preserve the painting but to recapture its original lost glory, the Holbein oil painting by then being considerably degraded. Jaquotot herself wanted her gravestone to be marked only with the inscription “A madame Jaquotot, créateur de la Peinture inalterable”[2].

In Paris she was allowed to borrow paintings from the Louvre and could keep them in her studio for a considerable time, despite protestations by the director of the Louvre Auguste de Forbin. In August 1823 Jaquotot had made a request for the Holbein to be made available to her for her to produce a medallion for the Tabatière du Roi that she was working on[3]. The whereabouts of that medallion is unknown, but she evidently chose to produce this much larger version which is almost exactly half the size of the original Holbein, which measures 65 by 48 centimetres. It is probably painted on Frères Nast porcelain which Jaquotot used in other commissions of that period[4].

The sale to Ludwig of Bavaria evidently did not materialise and in March 1830, having applied for a pension which was refused by the new administration, she announced to Brongniart that she had written a few days earlier to the Comtesse du Cayla, the mistress and confidante of Louis XVIII, on the subject of “her two paintings, L’Espérance and la Reine d’Angleterre d’après Holbein” entering into the negotiations for the income that she hoped to obtain[6].

In a letter from Geneva written on 2 July 1838 to the Baron de Werther, she asks him to offer the plaque, amongst other items, to The King of Prussia, it is listed as ‘un portrait, que l’on avoit apellé inimitable Holbein’…’ She asked him to speak to His Majesty and if he is not interested, to please write a note to H.M. the Emperor of Russia[7].

She records in her Cahier-Mémoire finally selling it to the Baron James de Rothschild for 15,000 francs in 1845 (along with two lesser pieces at 5,000 each) [8]. Here she describes it correctly as Tableau après Holbein, Anne de Clèves, femme d’Henry VIII avec de très belles mains. The Baron de Rothschild paid her with railway shares[9]. This was James Mayer de Rothschild, the founder of the French branch of the bank.

Jaquotot was the pupil and later the wife of Etienne-Charles Leguay (1762-1846), the director of the Dihl factory in Paris during the French Revolution who was considered the best figure painter of the Sèvres factory at the beginning of the 19th century. They divorced in 1801, the year in which she started working as a painter ‘en extraordinaire’ for Sèvres. Jaquotot subsequently had a son out of wedlock called Philippe Comairas, who she looked after and educated and kept close to when she married Isidore Pinet in 1836. In 1816, after she was awarded the title of “Premier peintre sur Porcelaine du Roi”, she was able to open her own workshop where she taught mainly woman to paint on porcelain for nearly 20 years. 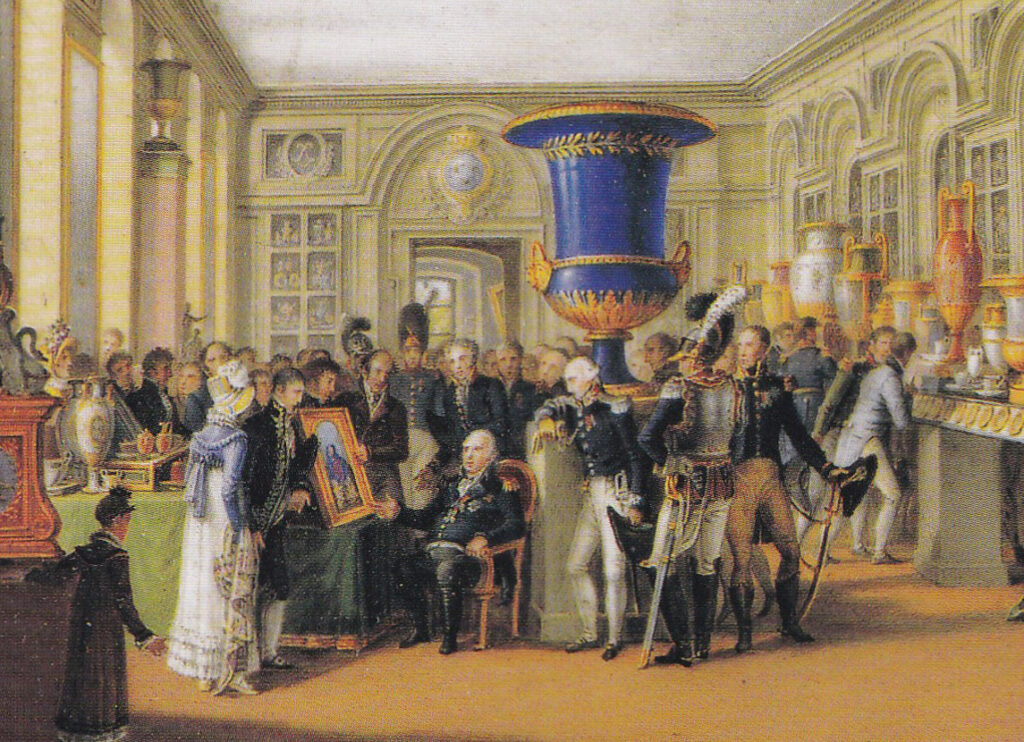 Jean-Charles Develly, Marie-Victoire Jaquotot presenting her tray painted with Raphael’s Virgin and Child to Louis XVIII on his visit of to Sèvres in 1816 (detail)

This newly rediscovered plaque of Anne of Cleves is of truly exceptional quality and one of the most arresting of all Madame Jaquotot’s works. 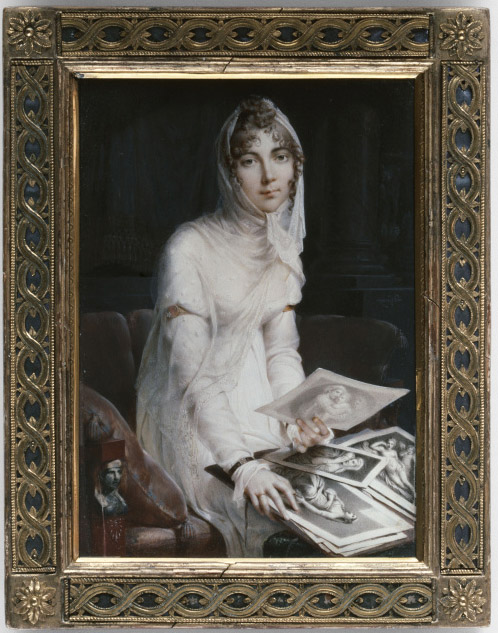 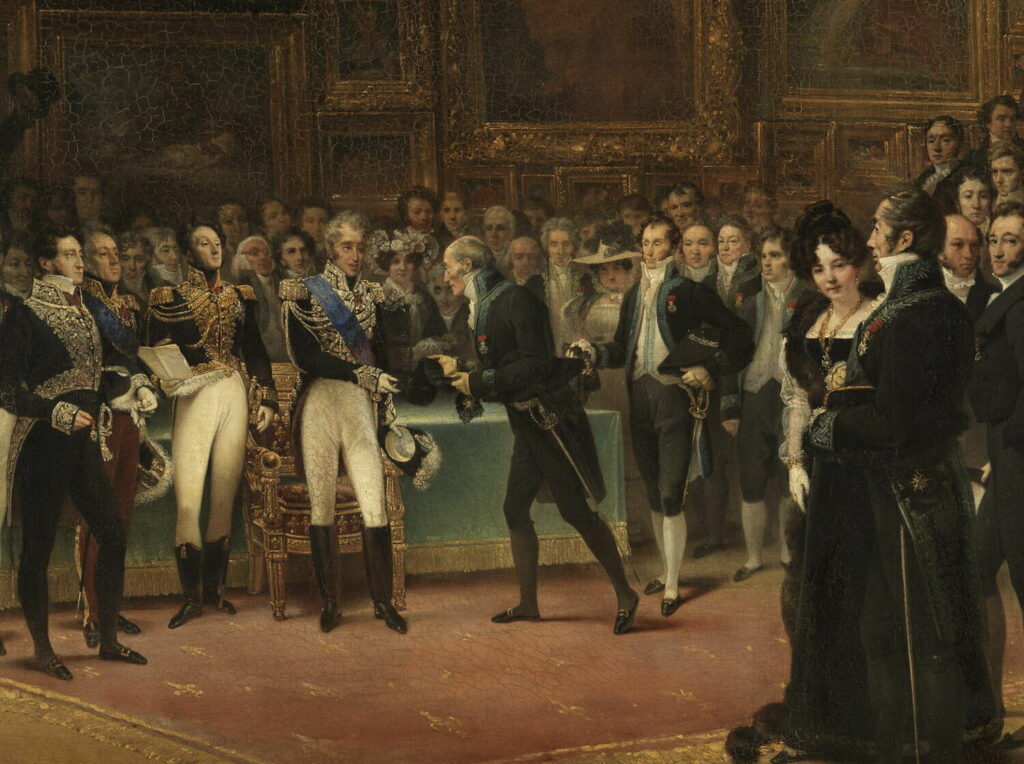 François-Joseph Heim, ‘Charles X distributing awards to artists exhibiting at the Salon of 1824’ Marie-Victoire Jaquotot stands between the King and Alexandre Brongniart. 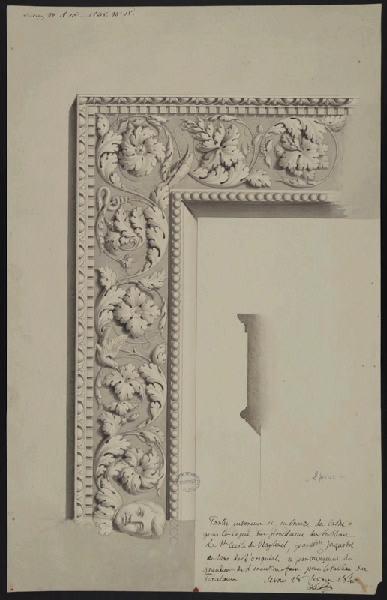 Jaquotot took great pains with the design and execution of the frames for her best works. Whilst we do not know who cast ours, the quality is exceptional. A frame designed for her plaque after Raphael ‘La Vierge au Diadème bleu’ was executed by Jean-François Denière, ‘fournisseur du gardemeuble et des princes’ who was, according to his letterhead of 1843, “Fabricant de bronze manufacture” [10]. This plaque was subsequently presented to the Pope by Louis Philippe and is now lost.

We are very grateful to Anne Lajoix for providing details of the provenance.

Note:
Loosely painted on the reverse in iron-red with ‘J.P.’ below some partly erased text, perhaps a price.

For the Louvre Holbein of Anne of Cleves:

[4] For instance, the plaques on the Tabatière of Louis XVIII in the Louvre ref MS 214