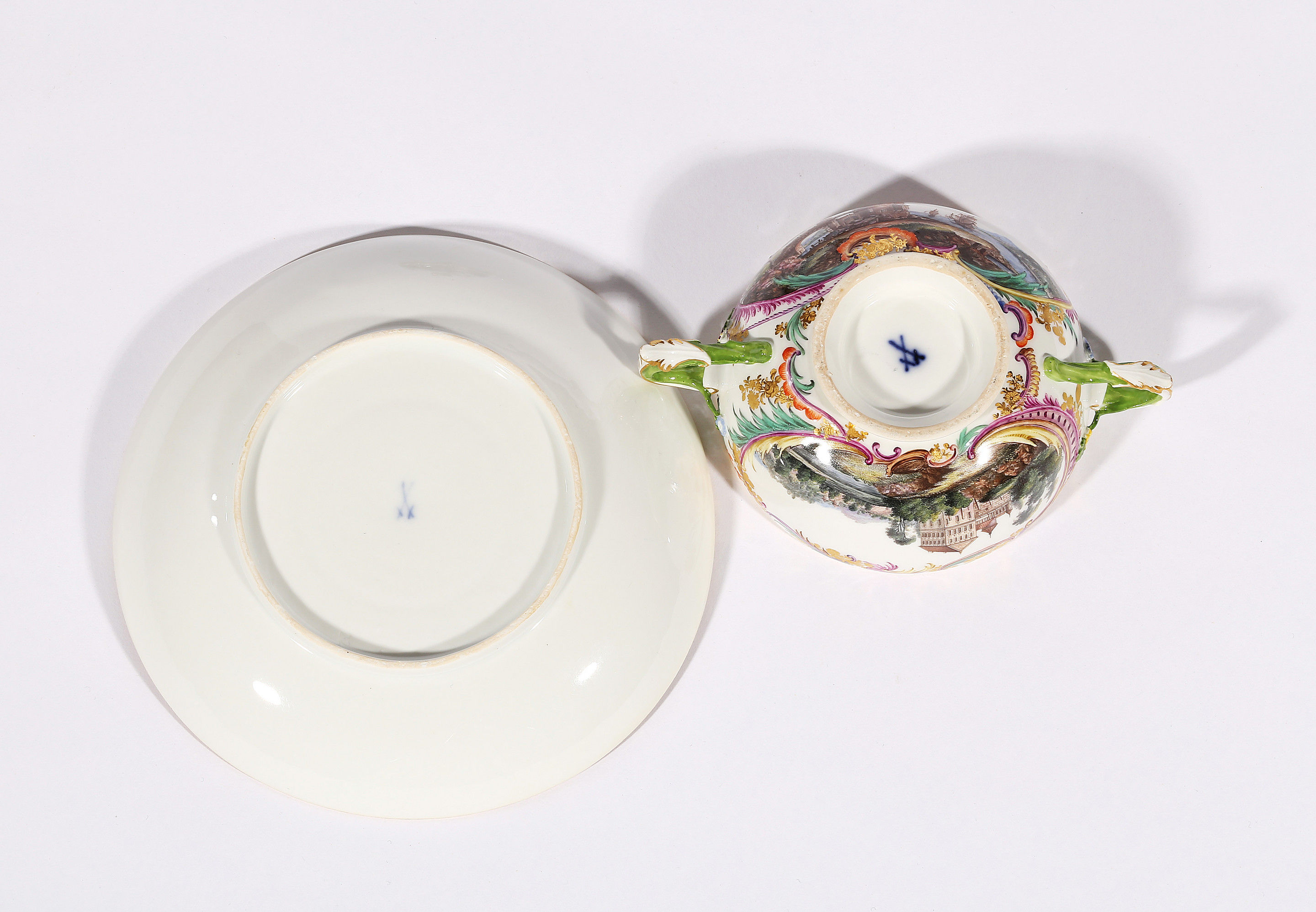 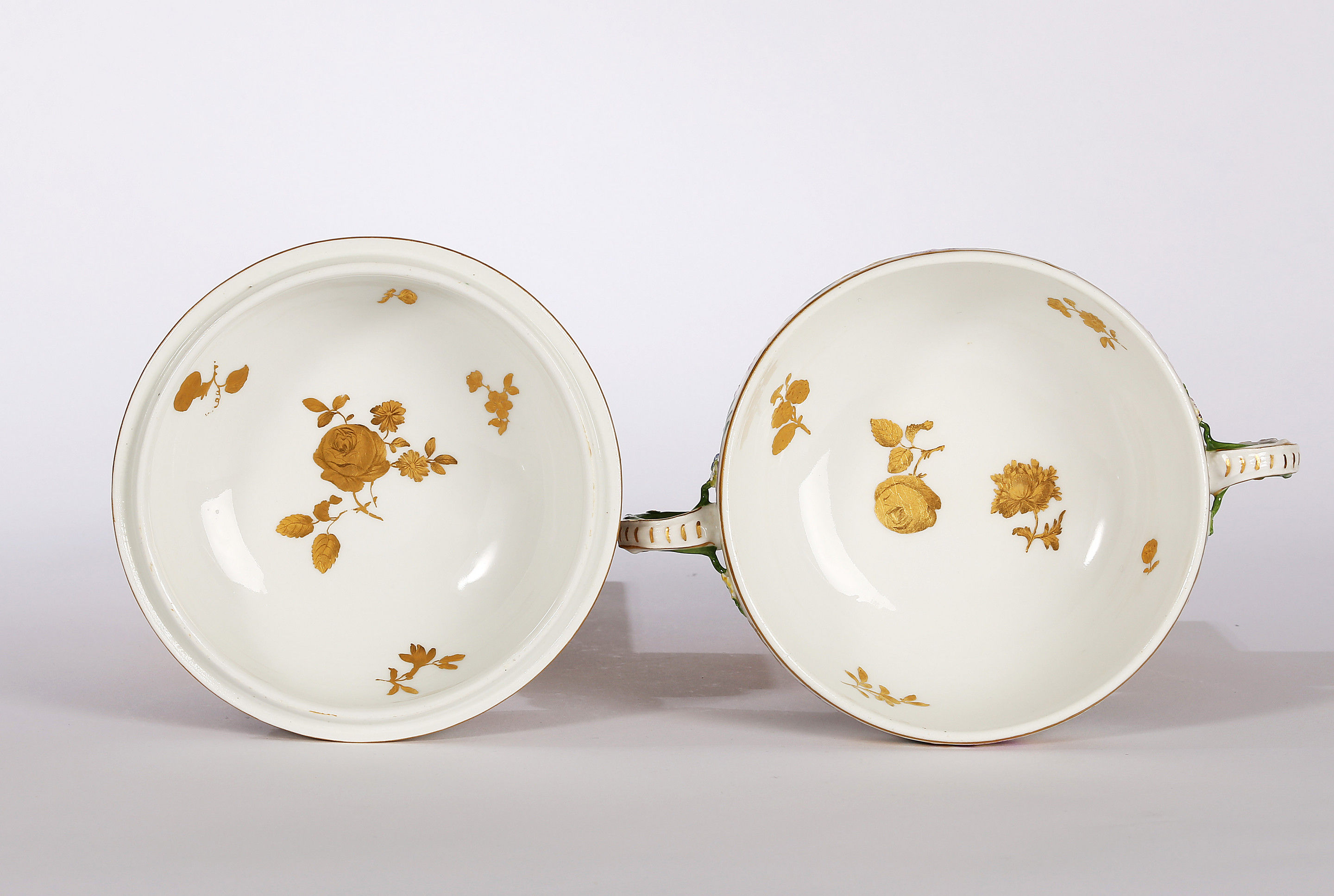 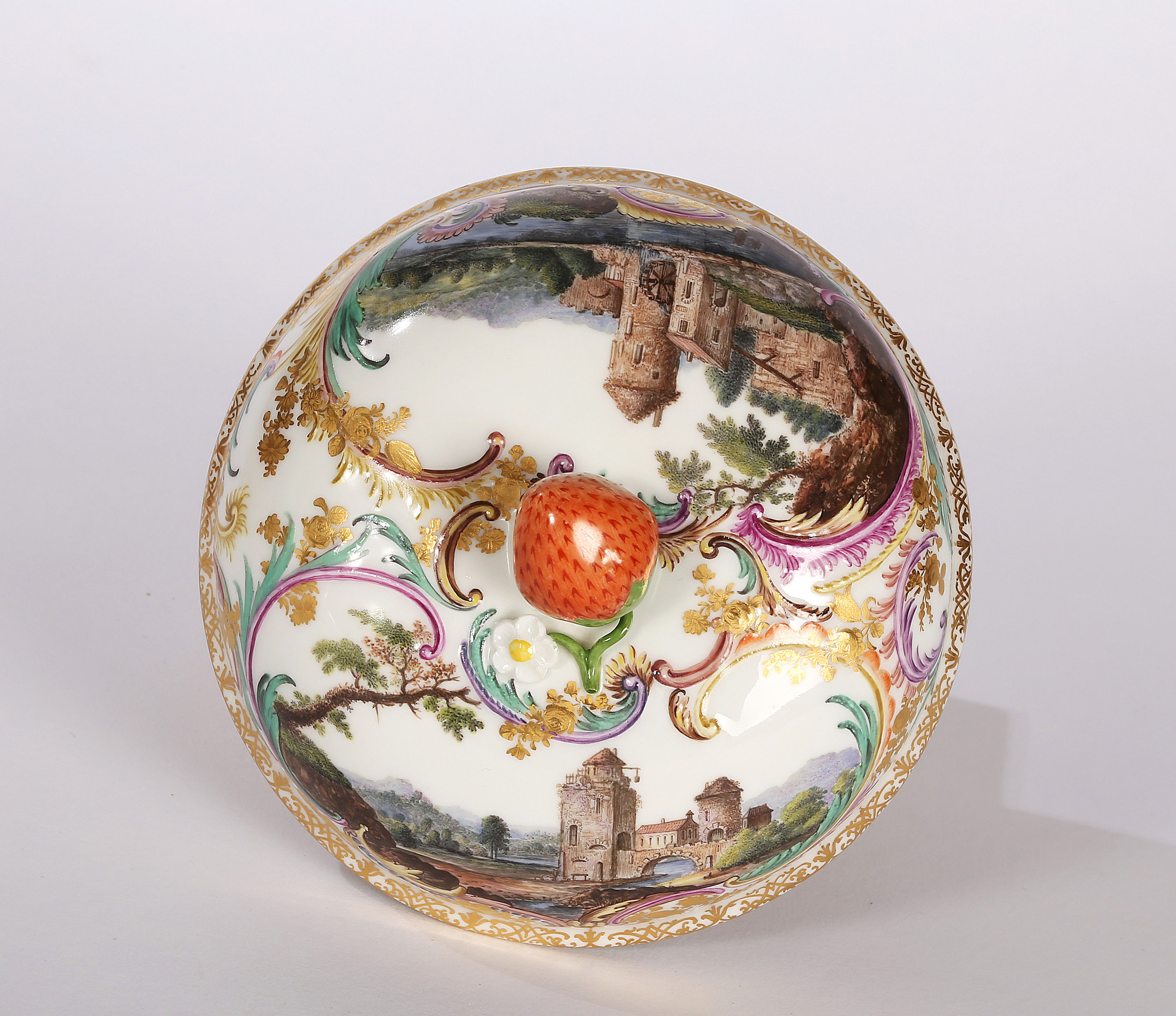 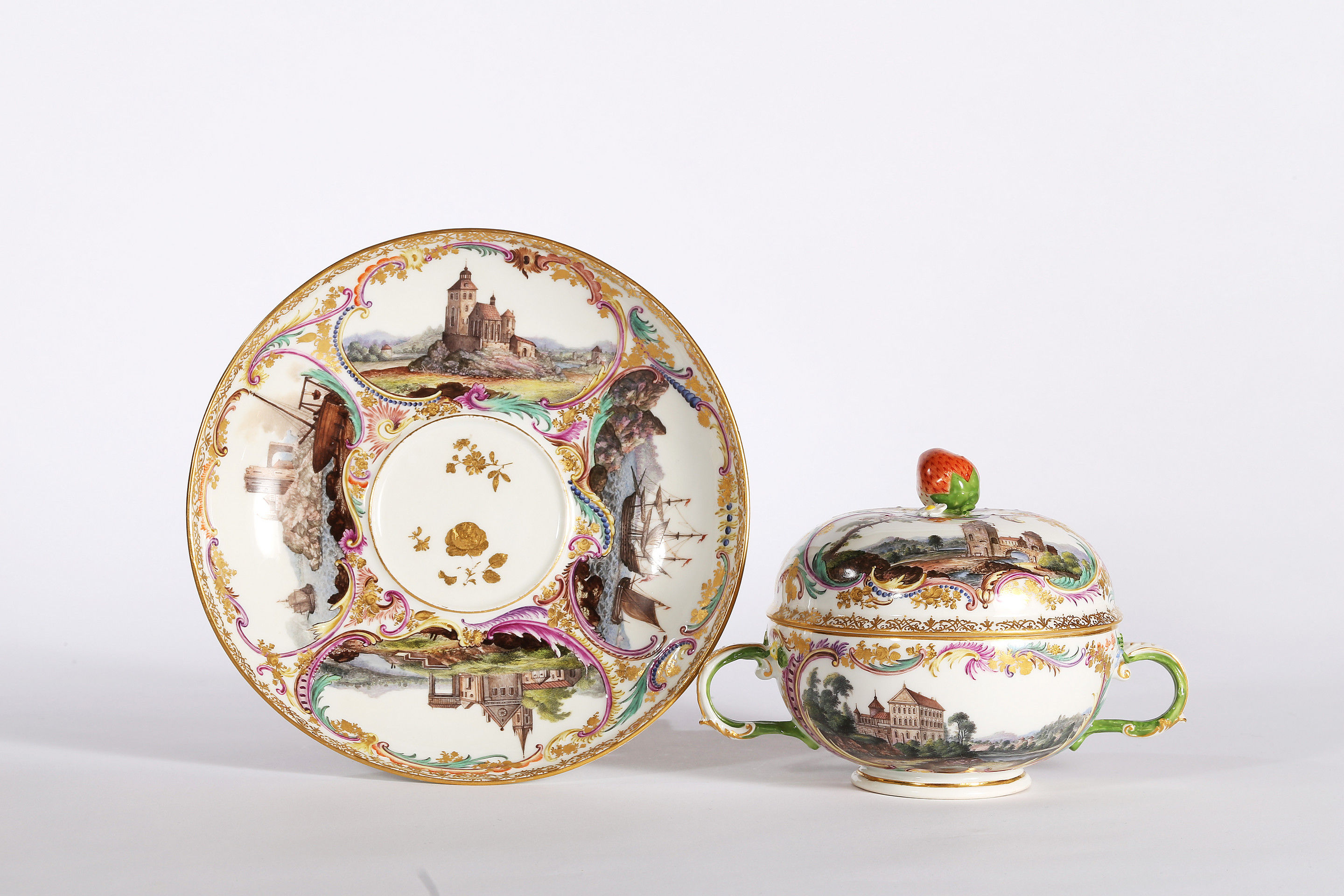 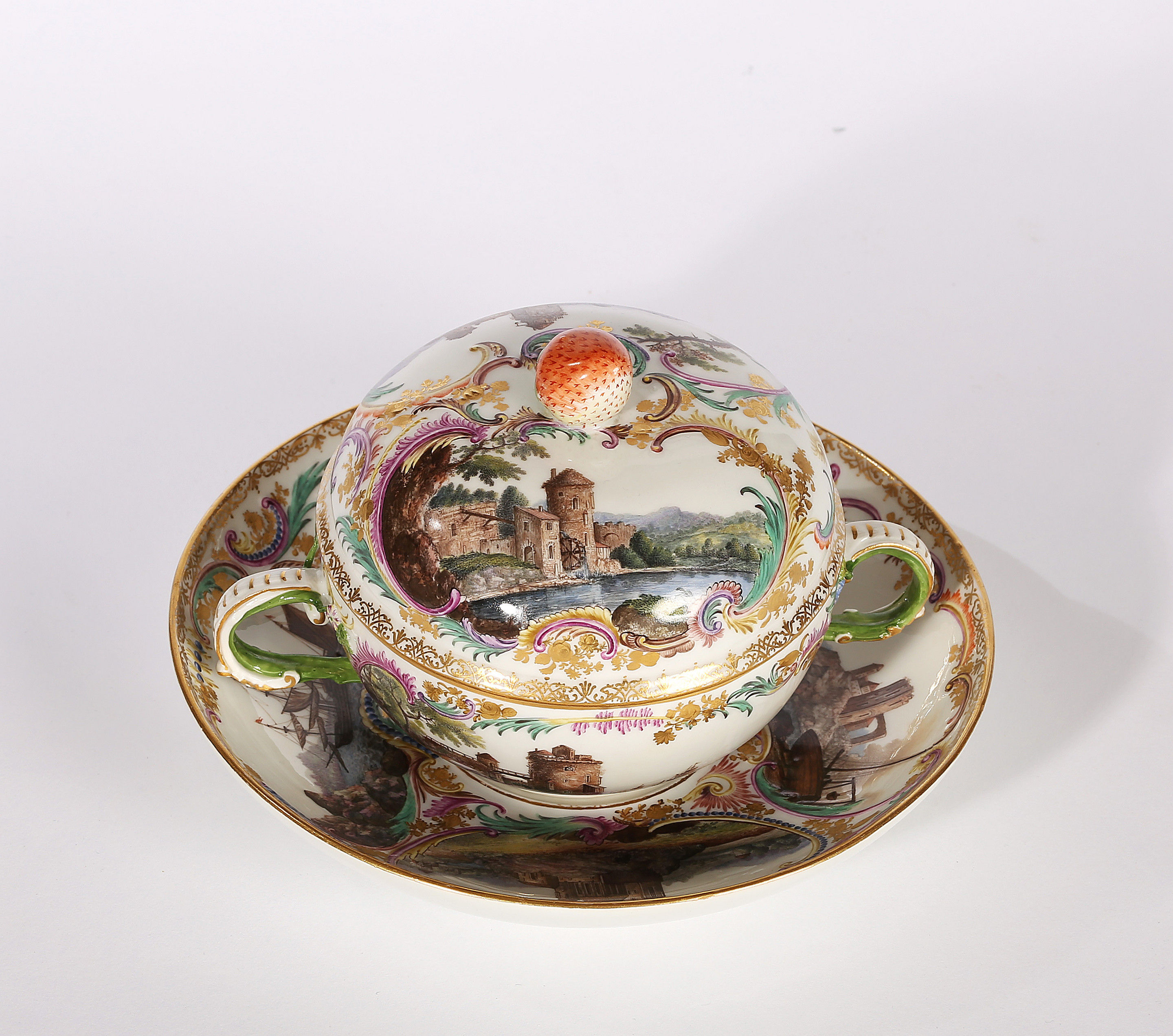 Circa 1745
Under-glaze blue crossed swords marks to the bowl and stand Impressed number ‘22’ to the stand.

This ecuelle is striking for its exceptionally rich and elaborate decoration.

The scenes of buildings and ships in landscapes are set within bold rococo cartouches painted in an untypically bright palette of mauve, pink, blue and turquoise with richly chased gilt floral additions. Unusually the interior of the ecuelle and well of the stand are decorated with further tooled gold flower sprays.

Ecuelles were never part of services but used for intimate private meals of broth, sometimes taken during the long process of the toilet or often by women in confinement.

The high quality of this piece is consistent with a royal provenance.

Condition – Small amount of wear to the gilt flowers in the well of the stand.

Provenance – By family tradition a gift from Henri d’Artois, Comte de Chambord, the Legitimist pretender to the throne of France from 1844 to 1883, to the Marquis de Foresta (Marie Maxence de Foresta, 1817-1888), the Chamberlain to the prince at his residence in exile at Frohsdorf in Austria, and passed by descent in the family until now.

The Comte de Chambord was disputedly King of France as Henri V although he was never officially proclaimed as such, he was the legitimist pretender to the throne from 1844 to 1883. He was the posthumous son of the duc de Berry, son of Charles X. Born seven months after the assassination of his father when the House of Bourbon was about to become extinct he was given the name Dieudonné or “miracle child” by royalists. He left France and went into exile in 1830. After the battle of Sedan in 1870 he was offered throne but insisted that he would only accept the crown only on the condition that France would abandon the tricolour and return to the white fleur de lys flag, this was refused and he never became king.