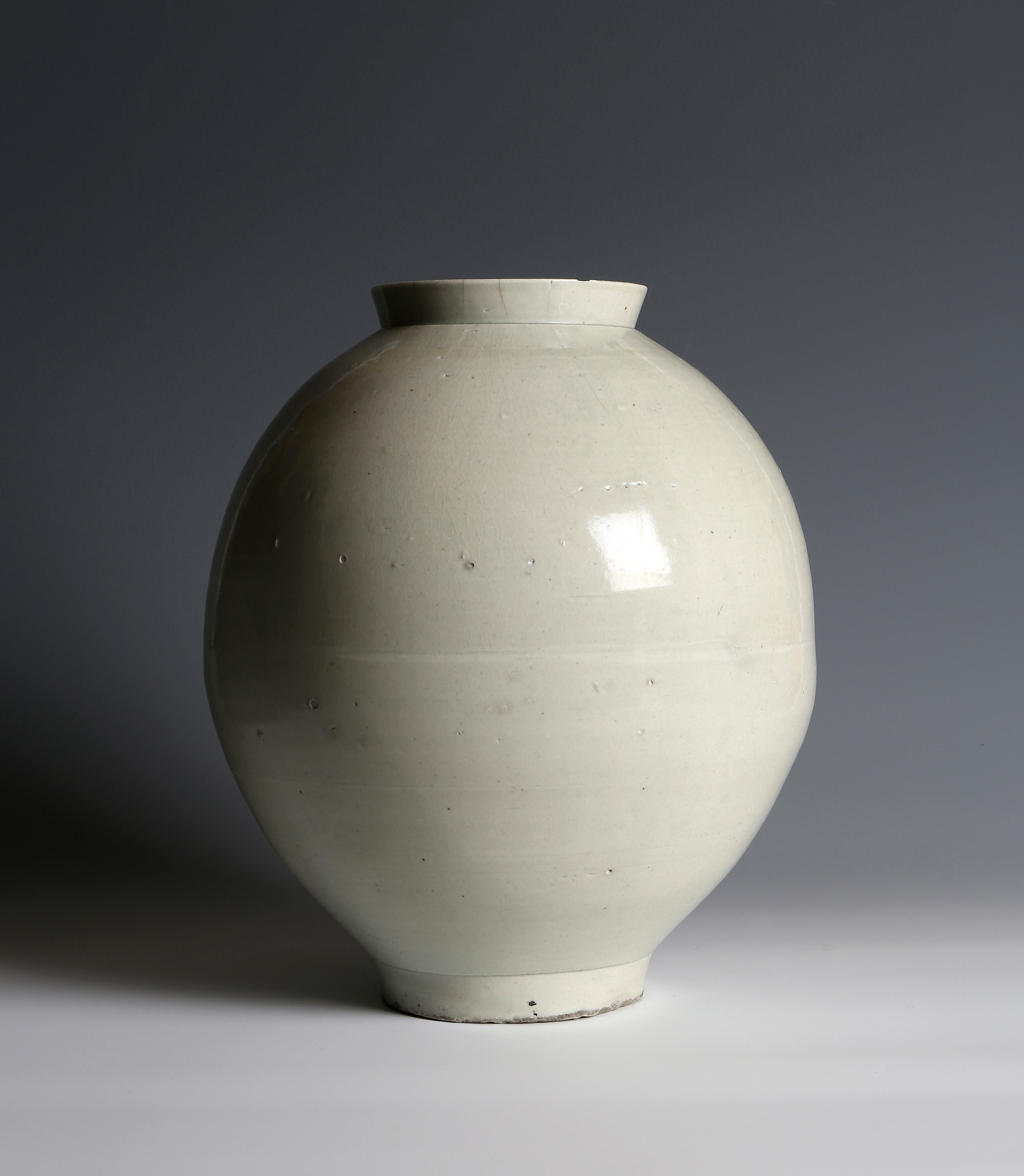 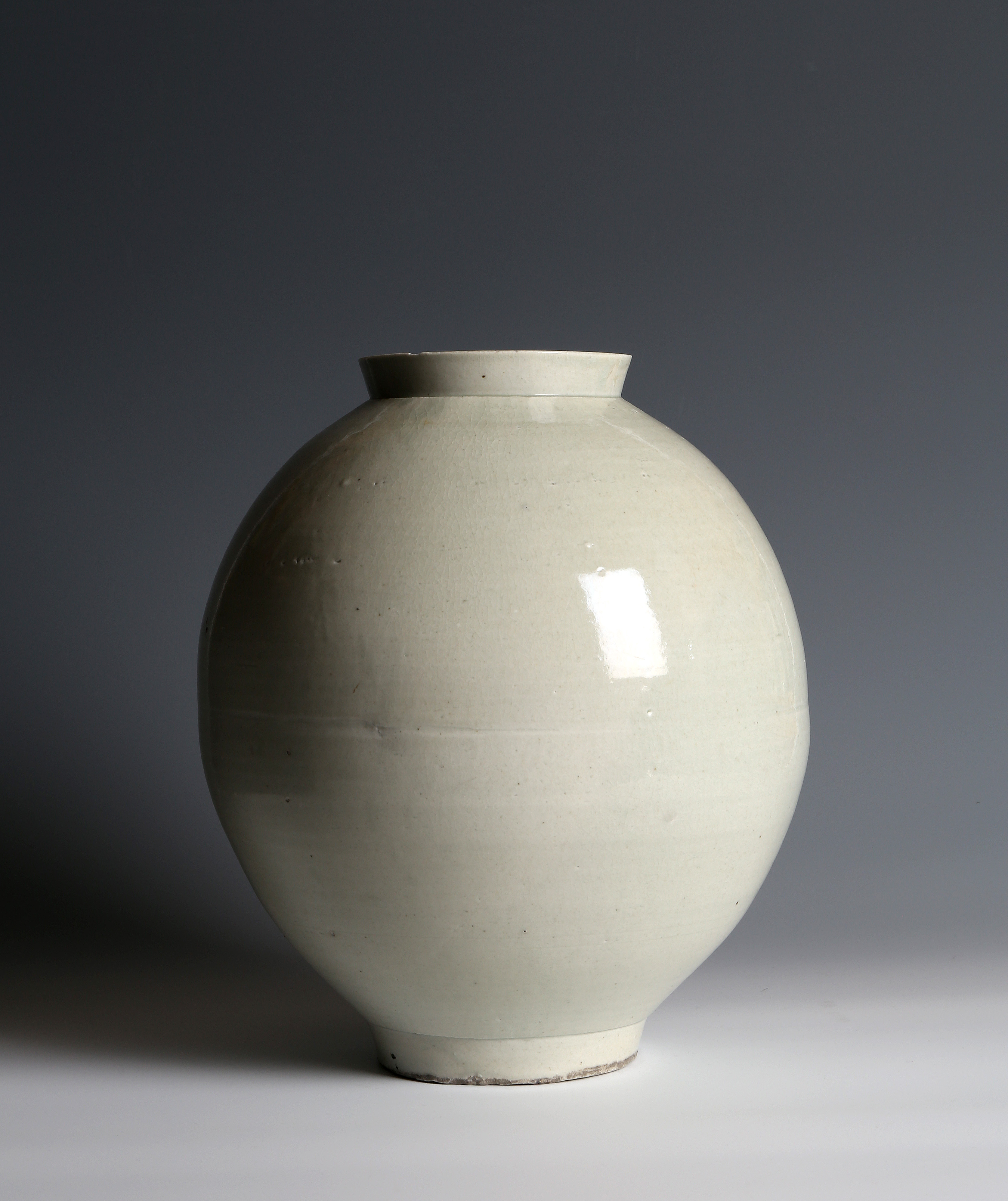 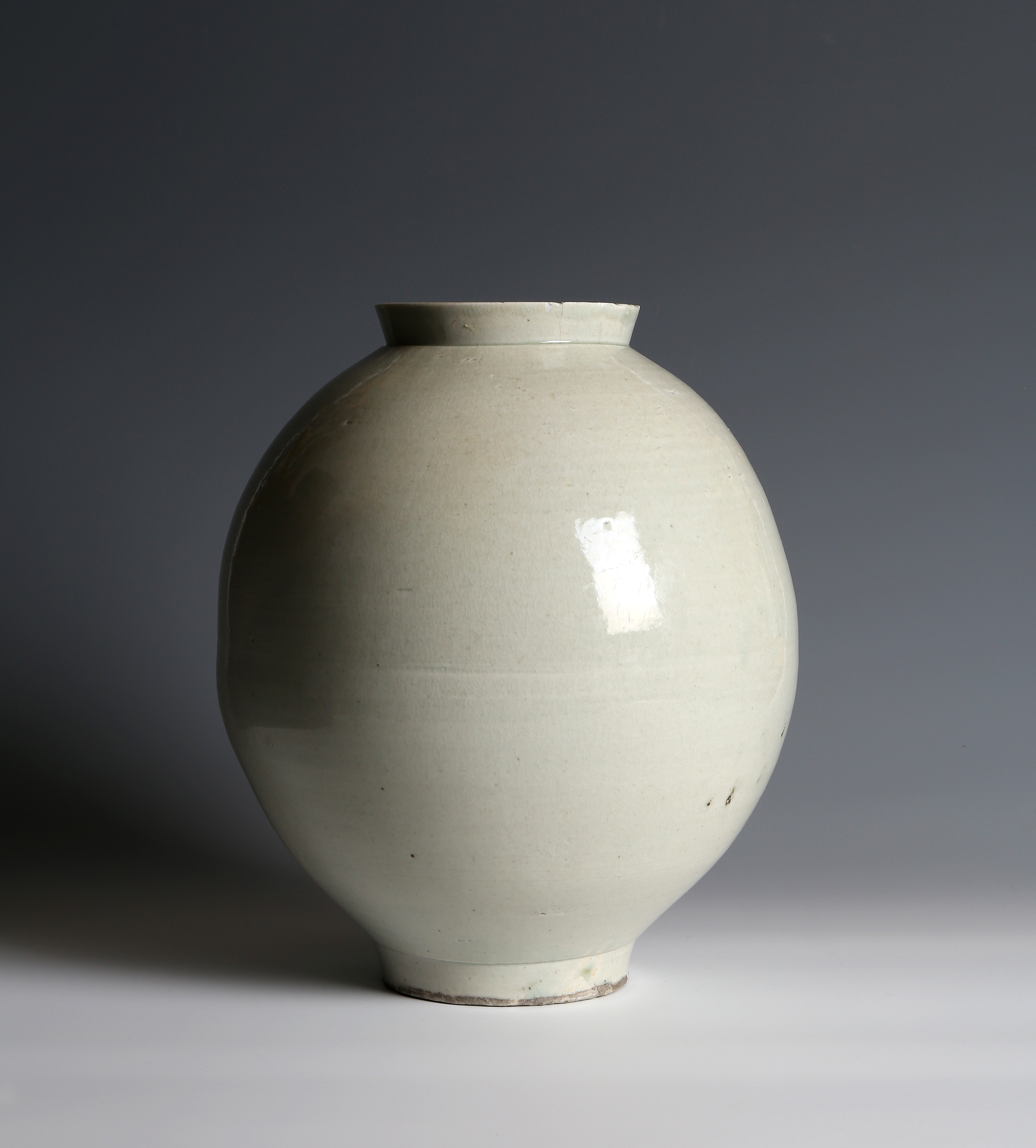 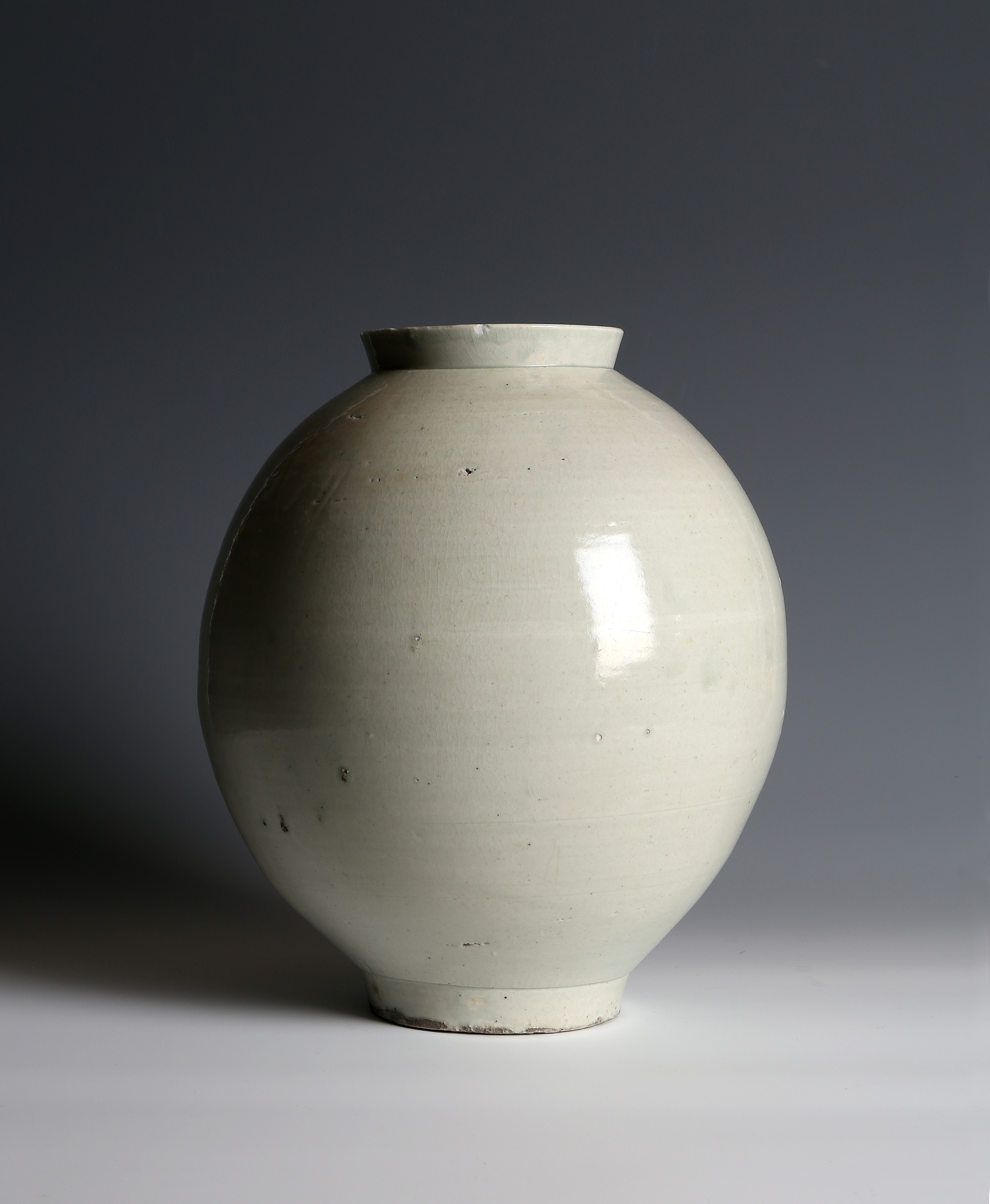 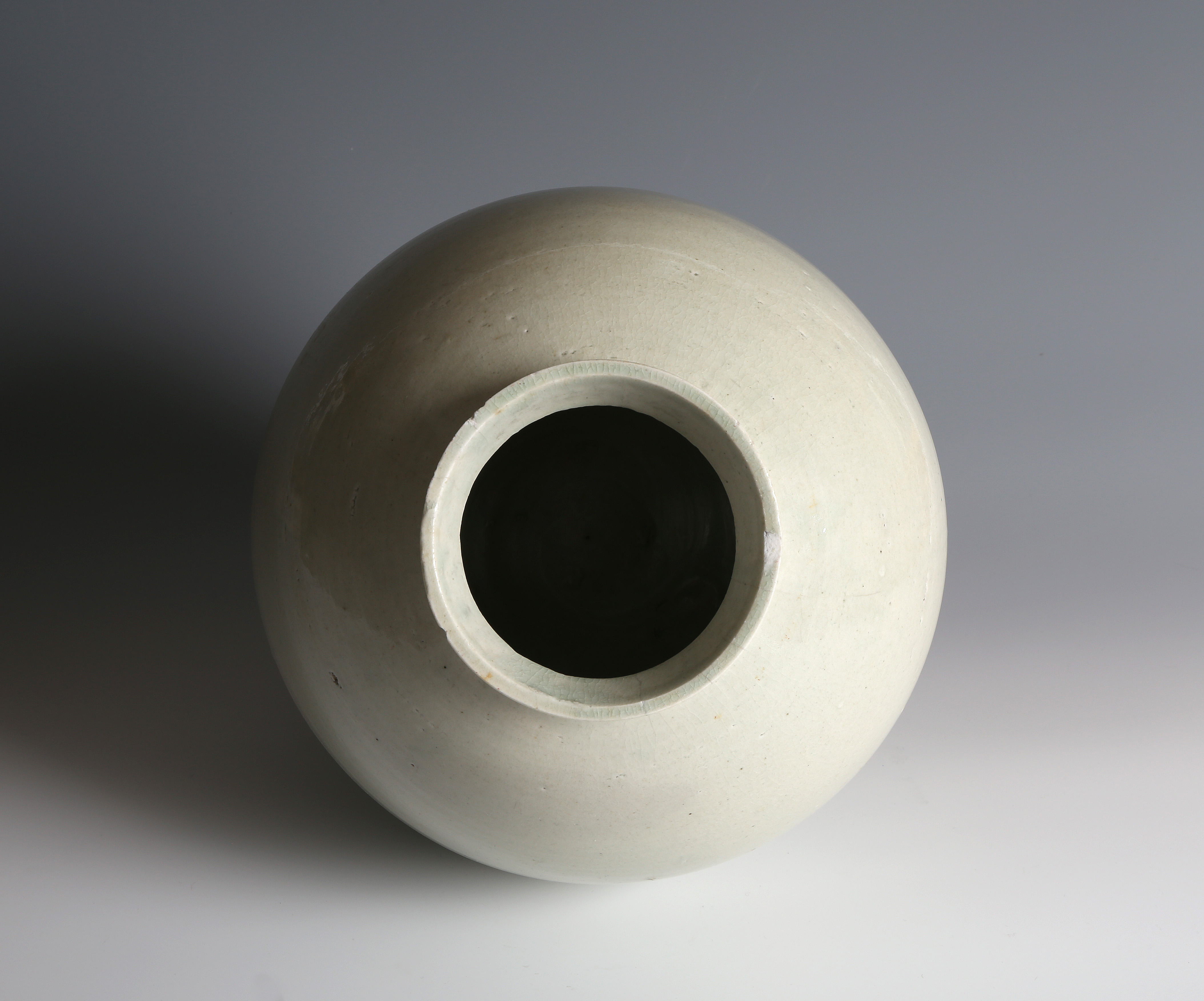 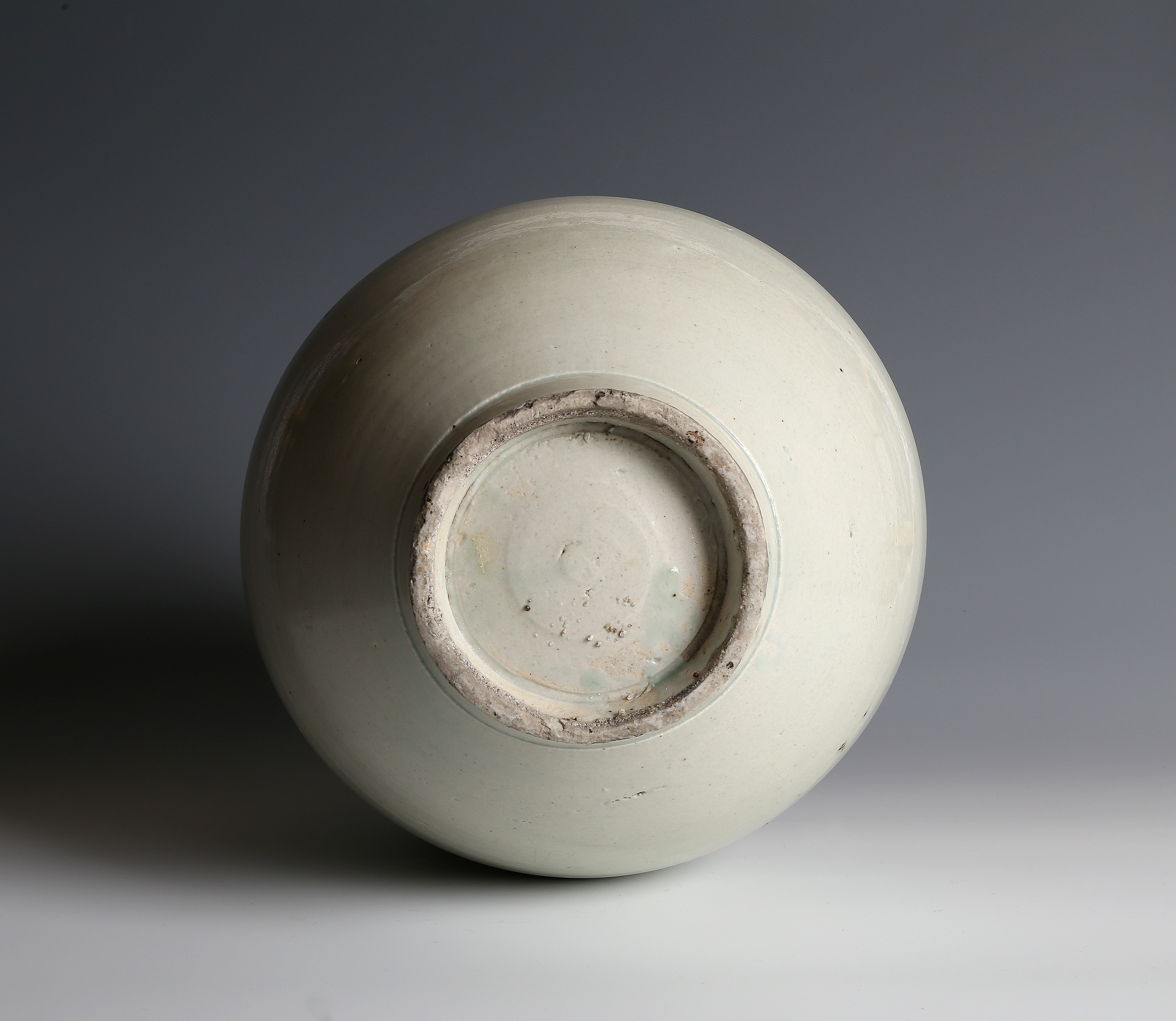 Moon Jars were originally created in the 17th and 18th centuries as household food storage jars but have been admired as artworks since Korea’s colonial period (1910-45). They are formed as two halves thrown on a wheel before being skilfully luted together horizontally around their widest point before being glazed and fired. The joint line is visible and they are admired for their unintentionally artful asymmetry.

Yanagi Sōetsu, the Japanese philosopher and founder of the mingei folk craft movement in Japan visited Korea in 1916 and talked of the freedom found in Korean pots by unknown artisans: “In modern art, as everyone knows, the beauty of deformity is very often emphasised, insisted upon. But how different is Korean deformity. The former is produced deliberately, the latter naturally. Korean work is merely the natural result of the artisan’s state of mind, which is free from dualistic man-made rules…. Here lies buried the mystery of the endless beauty of the Korean artisan’s work. He simply makes what he wants, without pretension”.  This aesthetic was introduced to the West by Shoji Hamada and Bernard Leach whose splendid example, that he bought on a visit to Korea in 1935 and later gave to Lucie Rie, is now in the British Museum (BM 1999,0302.1).

The Japanese taste for anonymous works of Korean potters dates back to the so-called ‘Tea Bowl Wars’ of 1592-98 when Toyotomi Hideyoshi invaded Korea and simple teabowls became admired prize possessions of the Japanese daimyo, or feudal lords, who elevated them to use in the tea ceremony. At this time the Japanese also forcibly relocated many Korean potters to Japan which was to lead to the establishment of the Japanese porcelain industry. Because of the shortage of skilled potters in Korea after this the Chosŏn government found it impossible to meet the demands for pottery which is now believed to have spurred the Royal Kilns to experiment with simpler forms and unadorned shape which gave rise to such wares as Moon Jars (see: Chang, ‘Korea’s Moon Jars’, p.38).

An early example in the Aizu Museum (Waseda University, Tokyo) bears an inscription on the bottom which reads utpatsyo (Royal Larder) which suggest that they were often stored in pantries and a record exists of a colonial period Japanese collector finding a Moon Jar lying on a wooden chest in the pantry of a Korean Noble’s house. (Chang p. 48, footnote 10).

The Korean moon jar glazed in white representing Confucian ideals of frugality and purity has become a defining symbol of Korean art much explored by potters and other artists and it was a cauldron in the shape of a moon jar that housed the flame at the Pyeonchang Winter Olympics in 2018.