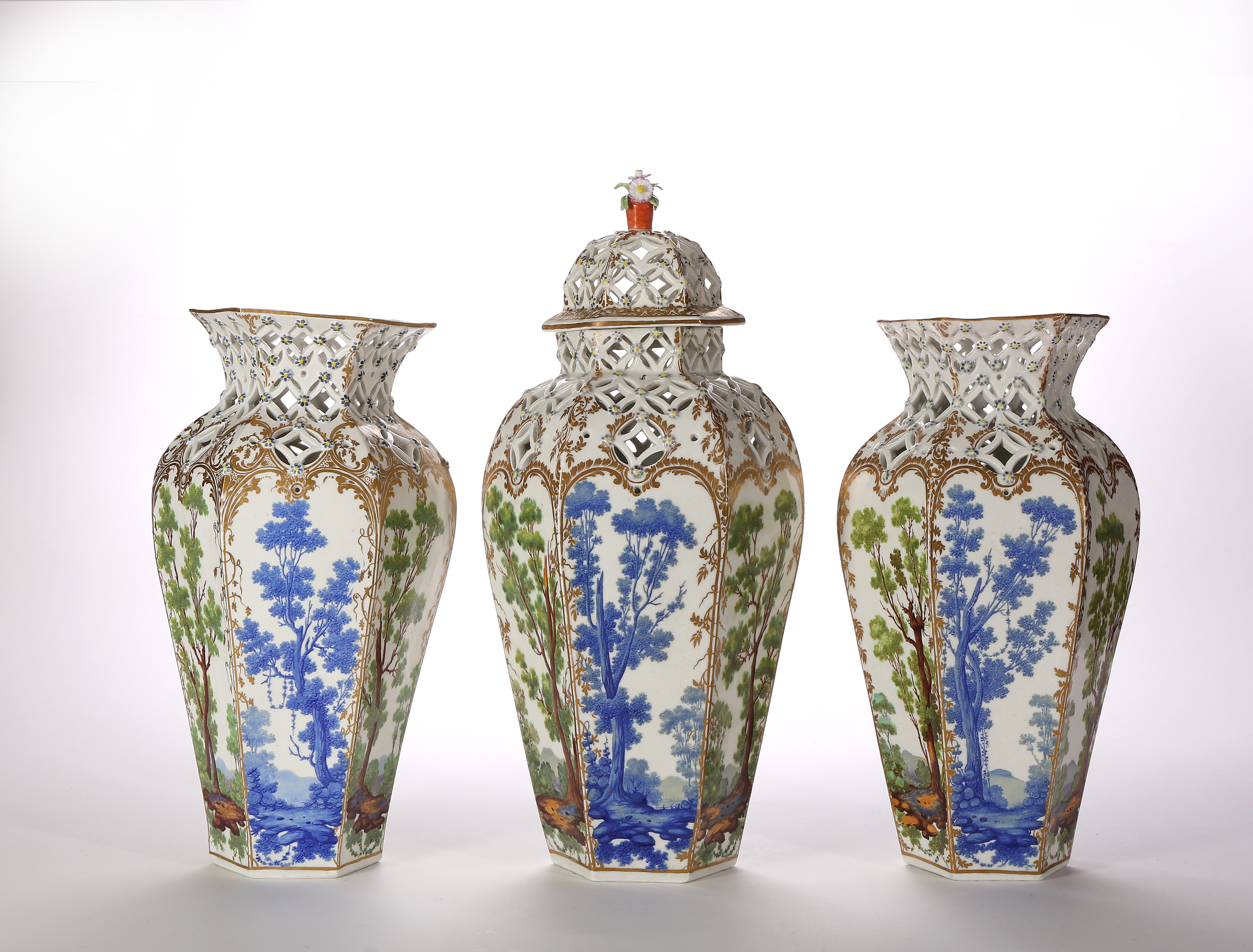 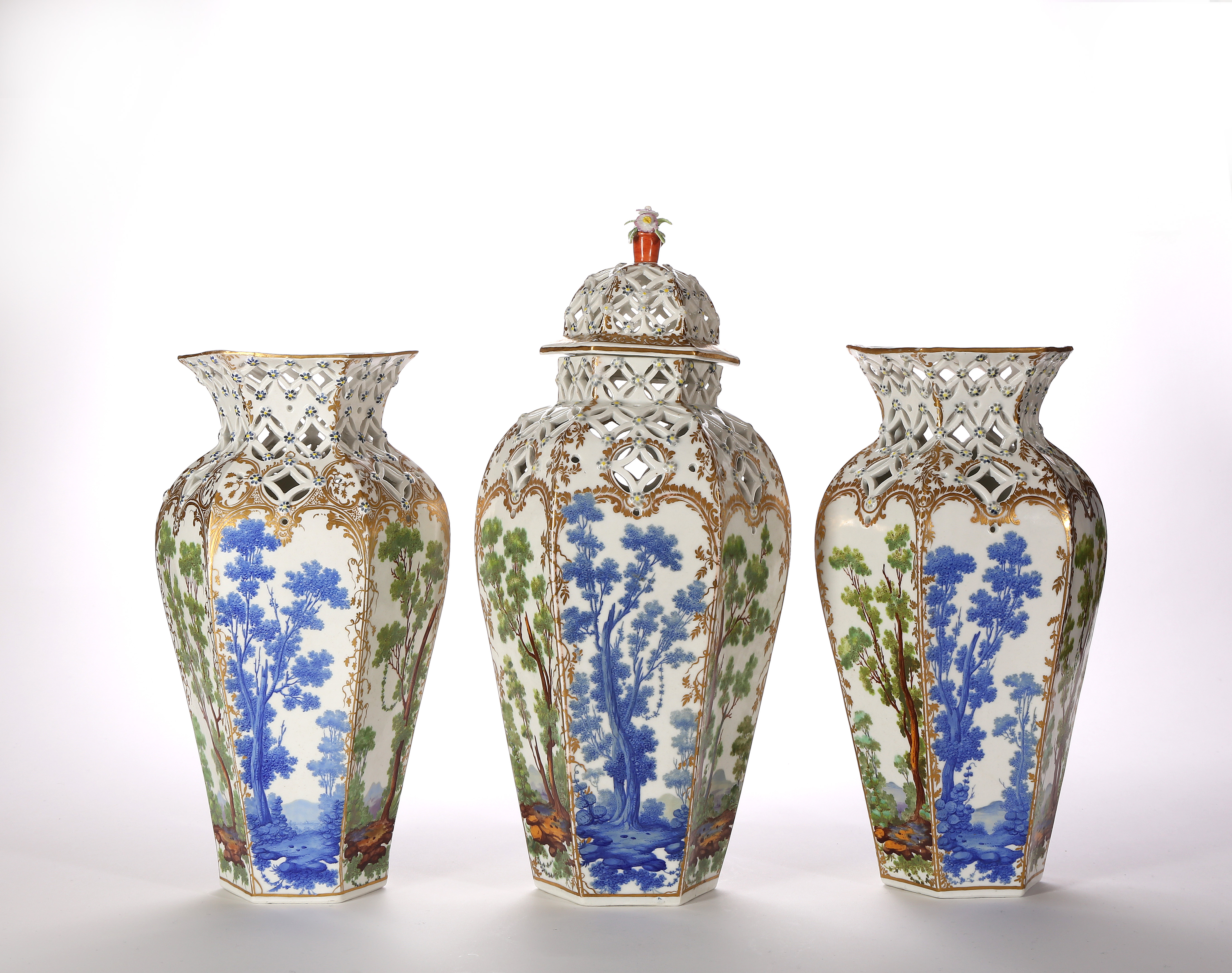 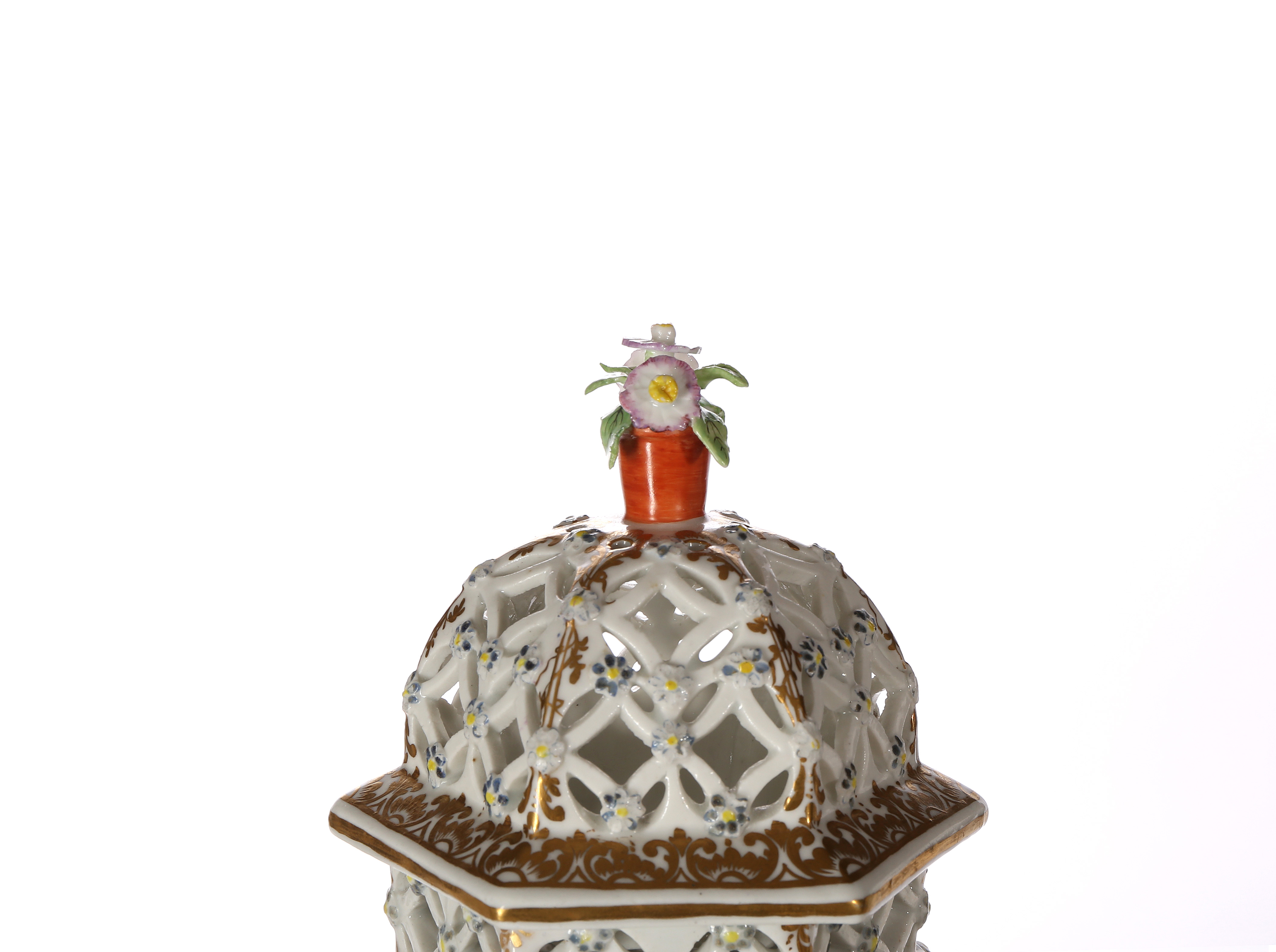 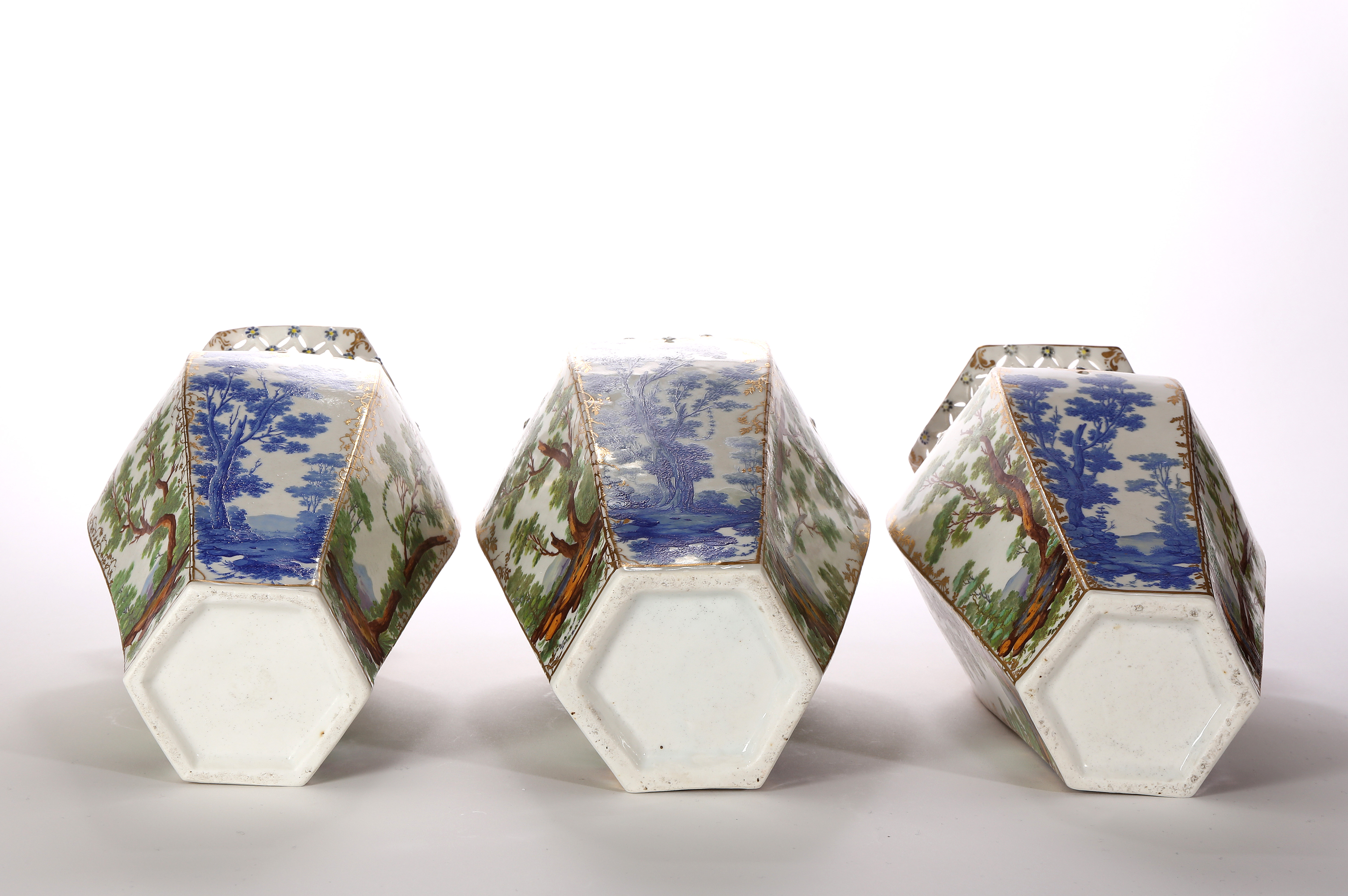 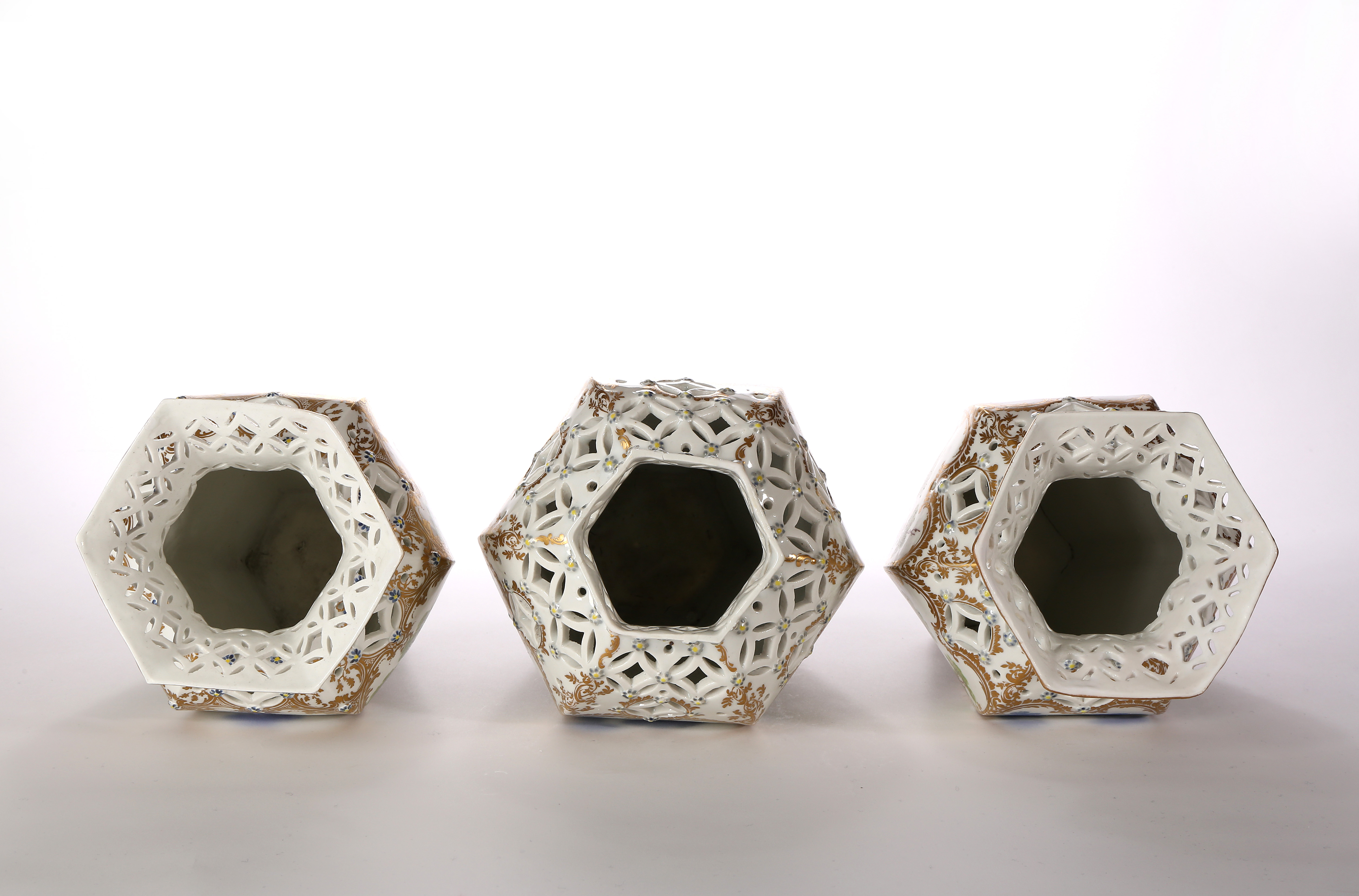 Perhaps painted by ‘Mons. Soqui’ or Michel Soquet
Richard Champion’s Factory
Circa 1772-73
The side vases 31.0 cm, the central vase 40.5 cm high
No marks

The hexagonal vases elaborately pierced around the shoulders and with applied flower heads, decorated on the sides with finely painted panels of naturalistically coloured trees in landscapes each divided by two panels in blue monochrome.

Writing in 1947 the collector and author of the standard works on Plymouth and Bristol porcelain, F. Severne Mackenna, had noted seventeen examples of large hexagonal Bristol vases, the most ambitious of the factory’s production. Shortly after publication of his seminal work, his attention was drawn to the existence of no fewer than six further vases in the possession of Mrs Aymer Whitworth at Woollas Hall, Worcestershire. He described the discovery as surprising and incredible and he was allowed to announce the existence of this important addition to the corpus of Bristol porcelain in an Article in Apollo Magazine in September 1947.

Mackenna described these three vases as the most important portion of the six vases noting that he knew of no other complete set of this type. The other three did not have the elaborate piercing around the necks, (these were sold at Bonhams, 18 May 2011, lot 432). He described them as being calculated to arouse feelings of envy and despair in every collector of Bristol porcelain although he was rather dismissive of the finial on the cover of the central vase formed, rather comically, as a flower pot.

The quality of the decoration is scarcely paralleled on other English porcelain and is perhaps by the hand of the French artist, ‘Mons. Soqui’. Writing in 1854, George Harrison, in his Memoir of William Cookworthy stated that Cookworthy ‘engaged the assistance of a French artist Mons. Soqui whose ornamental delineations…were extremely beautiful’. An earlier biographer had said that the proprietors of the Plymouth porcelain factory ‘are said to have procured an excellent painter and enameller from Sèvres’. It is believed that he continued to work at Bristol under Richard Champion when the factory moved there.

David Peters has suggested that this painter was probably Michel Soquet who was recorded at Vincennes in 1753 and then at Sevres between 1756-64 and again in 1773-74. Whilst no signed pieces are known, Roger Massey has proposed some attributions to pieces painted with birds which sometimes incorporate monochrome landscapes of a similar style (Massey, (2015), fig. 8). With their fine painting and elaborate piercing these are amongst the finest of all Bristol vases. They are recorded in a watercolour of the Great Hall at Woollas Hall which the Whitworth family sold in the late 1950s.

Condition:
Restoration to sections of the pierced work on the necks, particularly to one of the side vases where the upper section of half the rime is restored. The cover with corner chips and flower on the finial restored. Pictures during conservation available.

Provenance:
The Whitworth Family of Woollas Hall and by descent

References:
For a set of three simpler hexagonal vases with unpierced borders and similar blue monochrome panels see Hackenbroch, Yvonne, Chelsea and other English Porcelain, The collection of Irwin Untermeyer, (London’ 1957) fig. 294. These were originally part of a five-piece garniture with a pair in the Lord and Lady Fisher Collection.