A PAIR OF CHELSEA FIGURES OF SIGHT AND SMELL 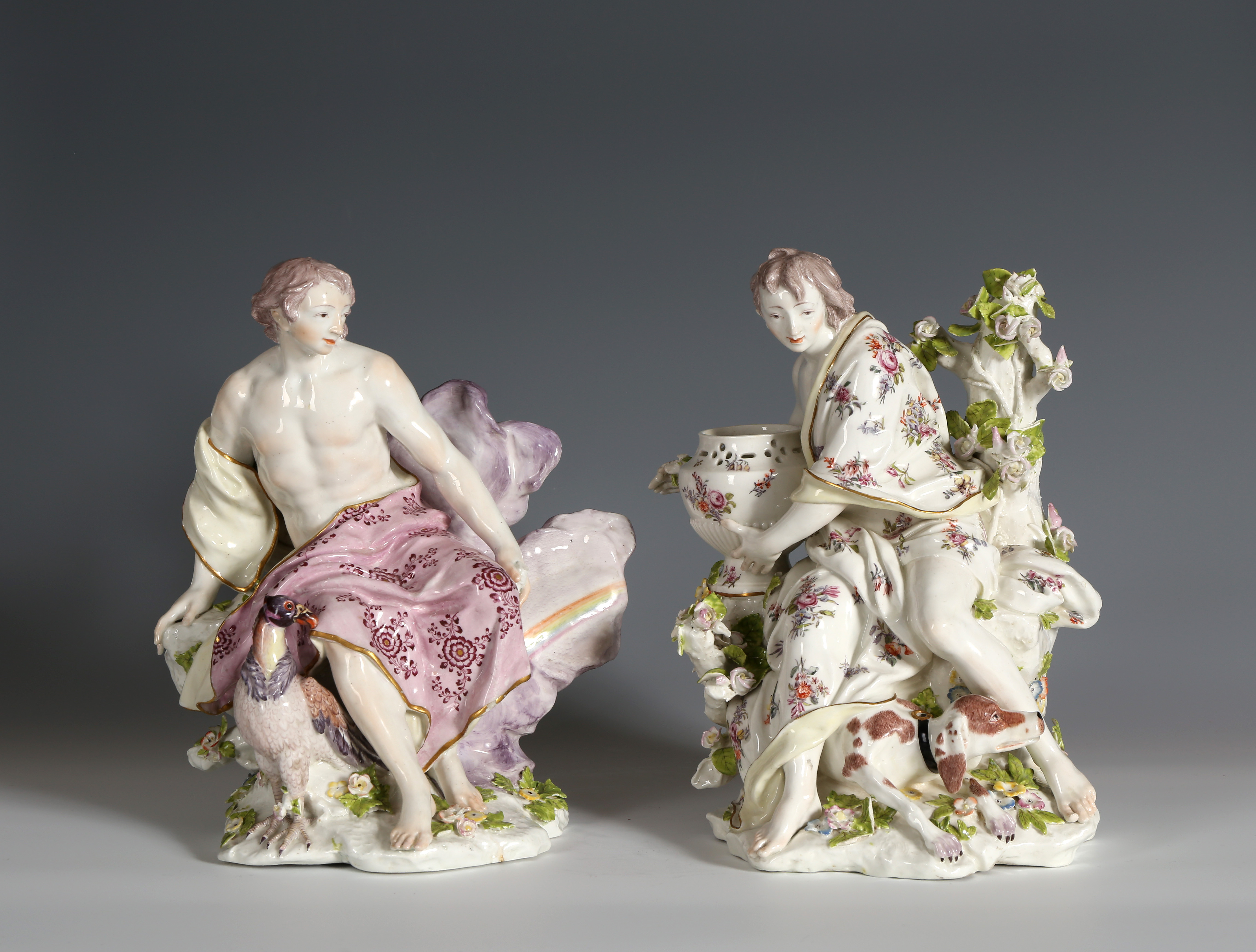 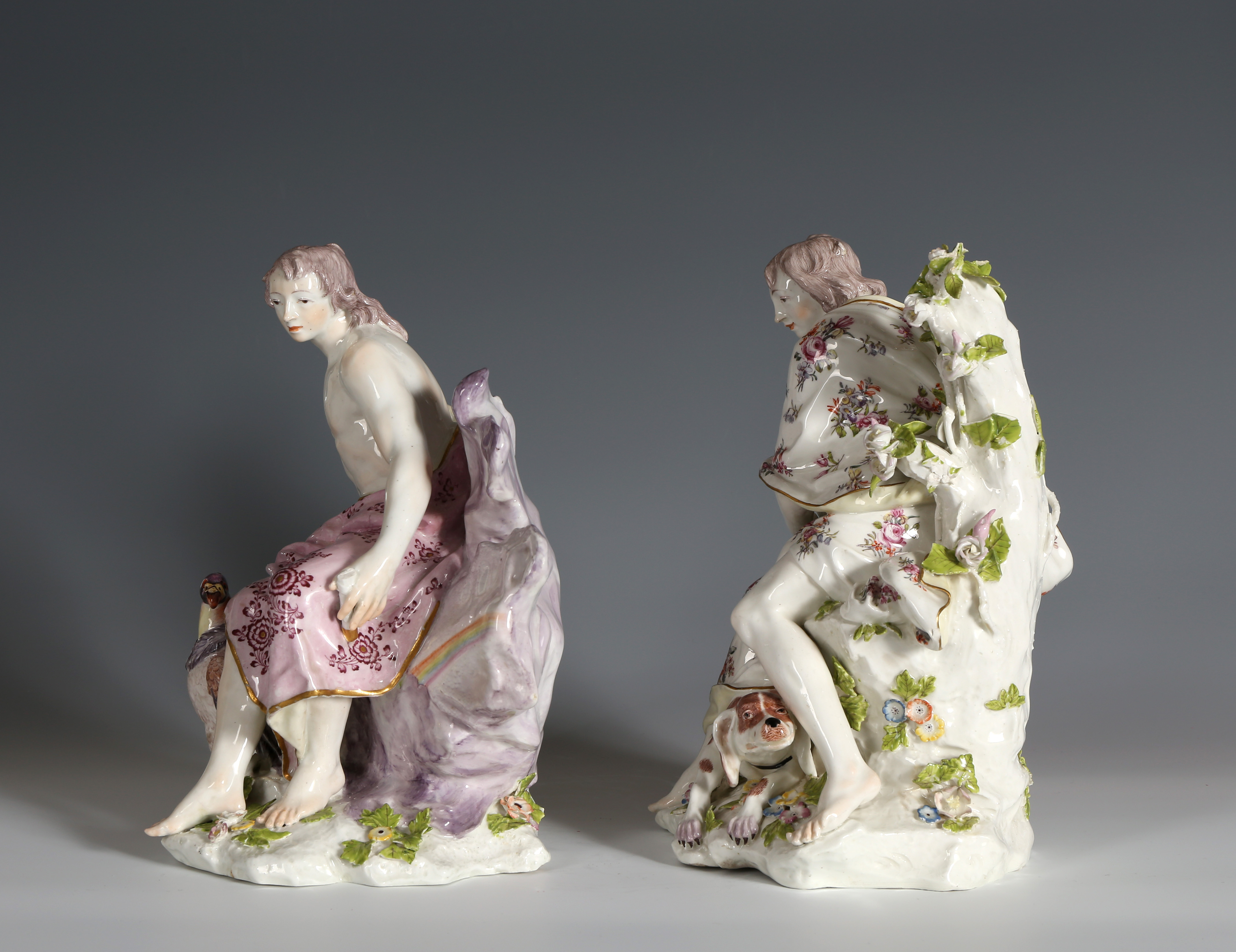 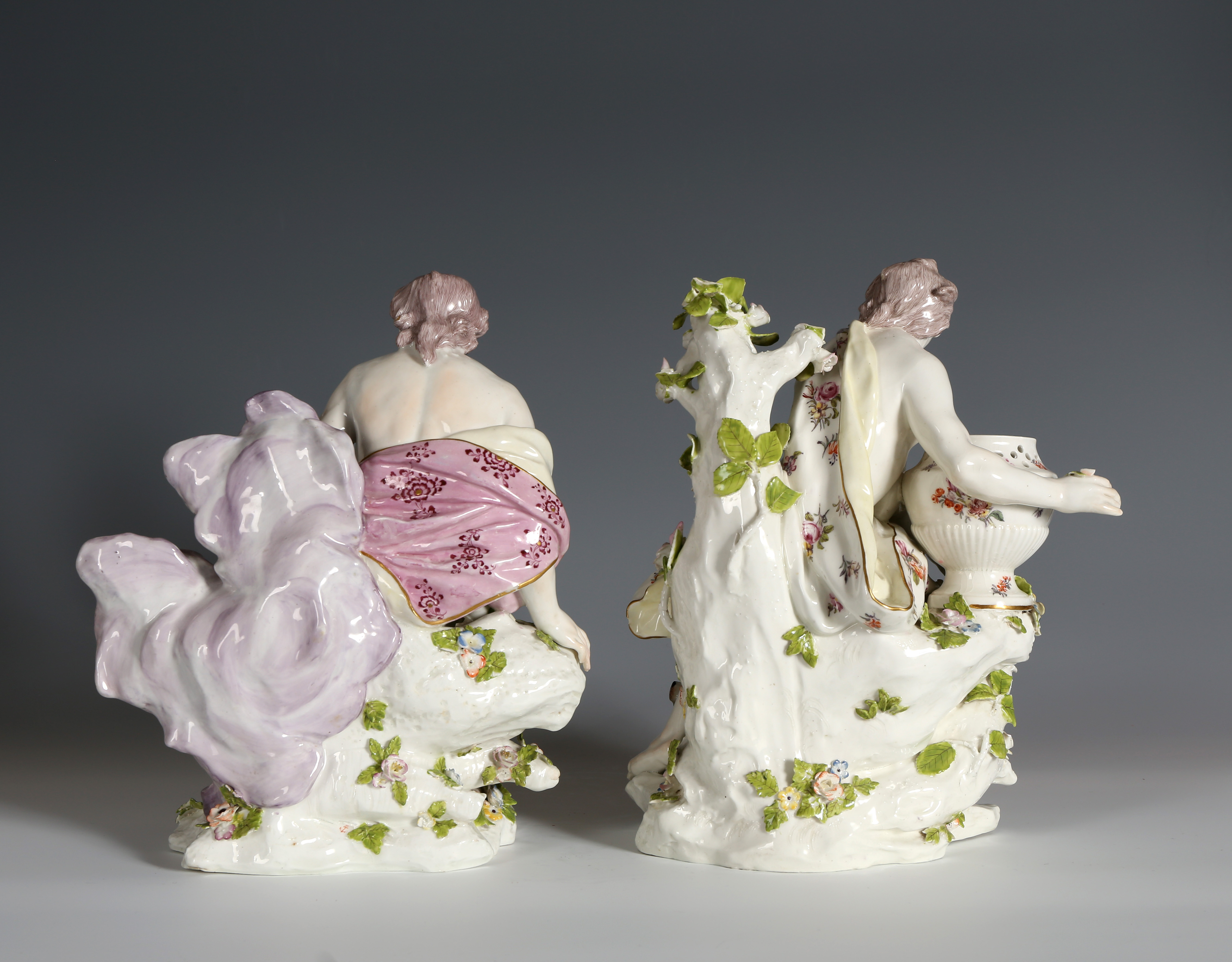 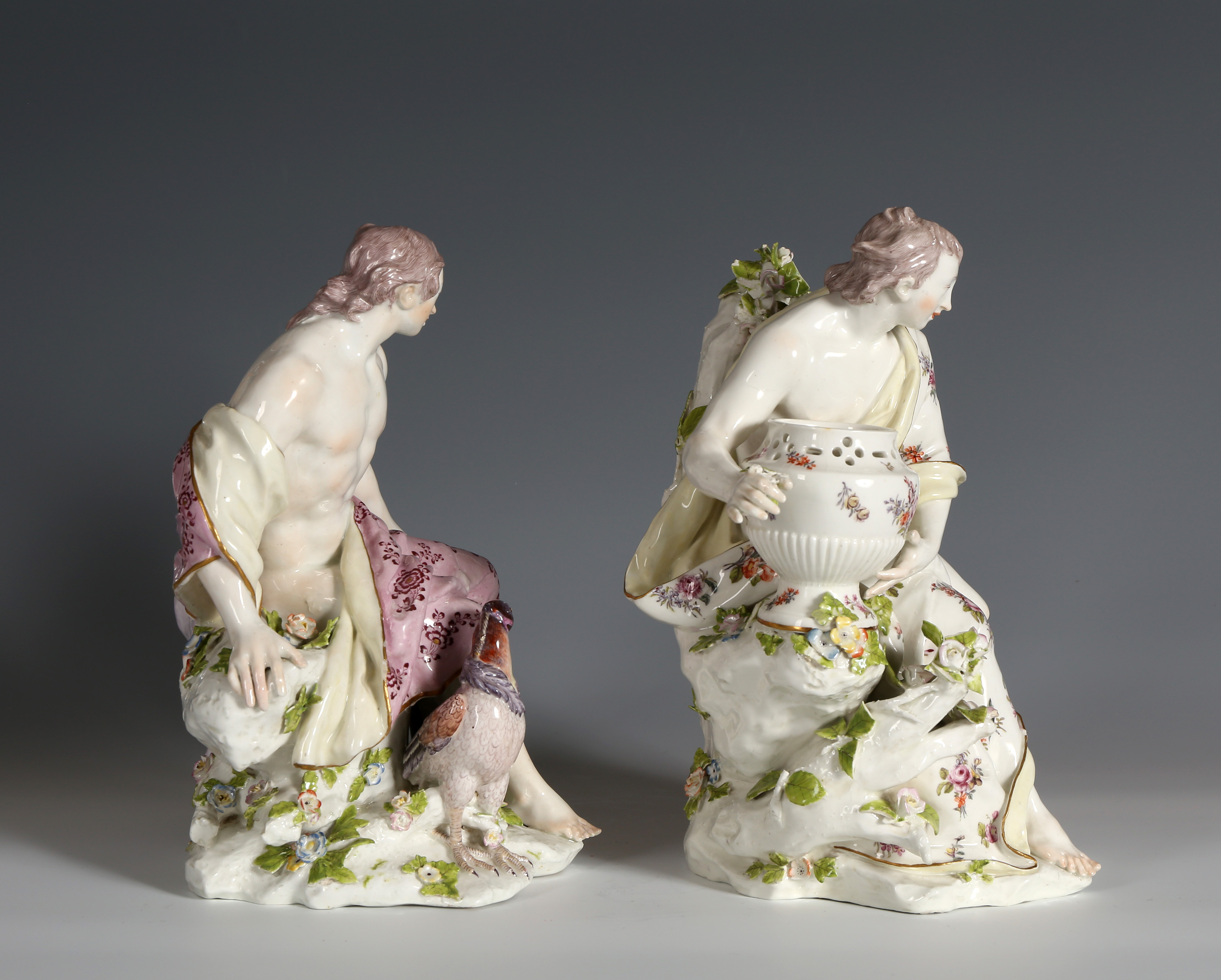 A PAIR OF CHELSEA FIGURES OF SIGHT AND SMELL, FROM THE FIVE SENSES

These rare figures, emblematic of Sight and Smell from the Five Senses, were created by the master sculptor Joseph Willems (1710-66), shortly before 21 March 1755 when models were offered in the Chelsea Porcelain Manufactory’s annual auction. Similar figures were offered on the Eleventh Day’s Sale, lot ‘50 A large and beautiful figure representing SEEING’, and lot ‘23 A large and beautiful figure representing FEELING’.[i] In the following year, in the Twelfth Day’s Sale, 10 April 1756, all five figures were offered individually in consecutive lots and on the Sixteenth and Last Day’s Sale, 15 April, four of the five figures, missing Sight, were also sold in consecutive lots.[ii] These large–scale figures were also, evidently, sold separately and not always as a set; three from the 1755 auction were in a sale in Dublin in 1760.[iii] Typical of his genius, they are original works of art and while a set of four, missing Sight, is at the Museum of Fine Arts, Boston, no complete set of five appears to have survived.[iv]

Sight or Seeing, a muscular youth, draped in a richly patterned pink himation lined in pale yellow, is seated on a rocky ledge beside an eagle, renowned for its keen eyesight, behind are billowing purple clouds painted with a rainbow, the base is applied with scattered flowers. Until 1925, when William King published his ground–breaking English Porcelain Figures of the 18th Century, the model was identified as Jupiter, god of the sky in Roman mythology. There is a similar coloured model in The Metropolitan Museum of Art, New York (14.58.117), from the collection of John Lambert Cadwalader (1836–1914); and a white example was formerly in the collection of Alfred E. Hutton, London.[v]

Smell or Smelling, a dishevelled youth wrapped in a himation painted with scattered naturalistic floral sprays, is seated holding a flower on a flowering stump with roses, supporting a pierced fluted jar or potpourri, painted with similar scattered flowers, and at his feet a hunting dog (‘setting dog’) or setter, still wearing his collar, suddenly alerted to the scent of his prey, crawls out from his master’s wrap, the base is applied with scattered flowers. There is a similar coloured model in the Museum of Fine Art, Boston (30.297), formerly in the collection of Alfred E. Hutton, and given in 1930 by Richard C. Paine. Another model, with the wrap painted with Meissen–style ‘Indianische Blumen’ was in the Paul Crane Collection, and sold at Bonham’s, London, 31 March 2010, lot 218. The classical wraps on most of the figures from this series are painted with Meissen–style flowers. All have gold details.

Allegories of the Five Senses, introduced by Aristotle in De Anima, were immensely popular in the sixteenth and seventeenth centuries. Their iconographic symbols were widely disseminated and instantly recognizable through engravings after the Flemish artist Frans Floris, the Elder (1516–1570), by Cornelis Cort (1533–1578), published in 1565, and others. As an artist trained on the Continent, Willems may have been familiar with these images. In England, he may have encountered the series by the designer Francis Cleyn (1582–1658), Quinque Sensuum, published in 1646, depicting seated female figures (V&A E.708–9–1927), which appeared in Mortlake tapestries. The attributes of all of his five figures, with the exception of Taste, usually represented by a monkey, are the same traditional animals, with Hearing identified by a stag or doe, an animal with exceptional hearing, and Touch by a tortoise. According to Aristotle’s hierarchy of the senses, sight was the most important, followed by hearing, smell, taste and the most material, touch, was the lowest, hence the tortoise, which is closest to the earth.

The Five Senses enjoyed a revival of interest in the mid–eighteenth century in Britain. The Huguenot émigré, Philippe Mercier (1689–1760) painted a delightful series in 1744 and 1747, and another artist Francis Hayman (1708–1776), of Vauxhall Gardens fame, painted a set of coquettish young women in contemporary dress, which was published as mezzotints by John Bowles in 1753 (British Museum, 2010,7081.548). The Italian–born sculptor Agostino Carlini (circa.1718–1790), living in London, created two unique sets of the Five Senses for the Derby factory, circa. 1752–55, one with chinoiserie figures and the other in contemporary dress.[vi] Willems and the proprietors of the Derby factory may have also been inspired by the set of five figures produced by the Meissen factory.

Around 1747–1753/4, Meissen had produced a set of the Five Senses with large standing female figures in classical dress and the same traditional animal attributes (Taste includes a monkey), modelled by J. J. Kändler and J. F. Eberlein. Four of the five models were inventoried at Burghley House, Stamford, Lincolnshire, in 1763: ‘Lady Exeter’s dressing room … the four senses. Dresden China’. The Meissen models were copied by Chelsea in a second set, produced around 1760–65 (see an example in the Fitzwilliam Museum, Cambridge, C.82–1932). Derby produced a unique set, circa 1770–84 (see British Museum, 1940,1101.41). The German figures or the second Chelsea set were copied at Bow, between 1760 to 1770 (see British Museum, 1959,1102.62).   Our figures are not copies of Meissen but are original conceptions of Josef Willems.

[ii] On 10 April 1756, lot ‘61 A most beautiful figure representing one of the senses (SEEING)’, was followed by lots 62–65 ‘One ditto of FEELING … SMELLING … HEARING … TASTING’, and another four, missing Sight, were offered on the Sixteenth and Last Day’s Sale, 15 April, lot ’41 A most beautiful large figure of one of the senses, Viz. SMELLING’, ‘lot 42 One ditto of FEELING’, ‘43 One ditto of HEARING’, ‘44 One ditto of TASTING’, in Raphael W. Read, A Reprint of the Original Catalogue of One Year’s Curious Production of the Chelsea Porcelain Manufactory, sold by auction by Mr. Ford’, Salisbury, 1880.

[iv] At least three examples of most models have been identified.