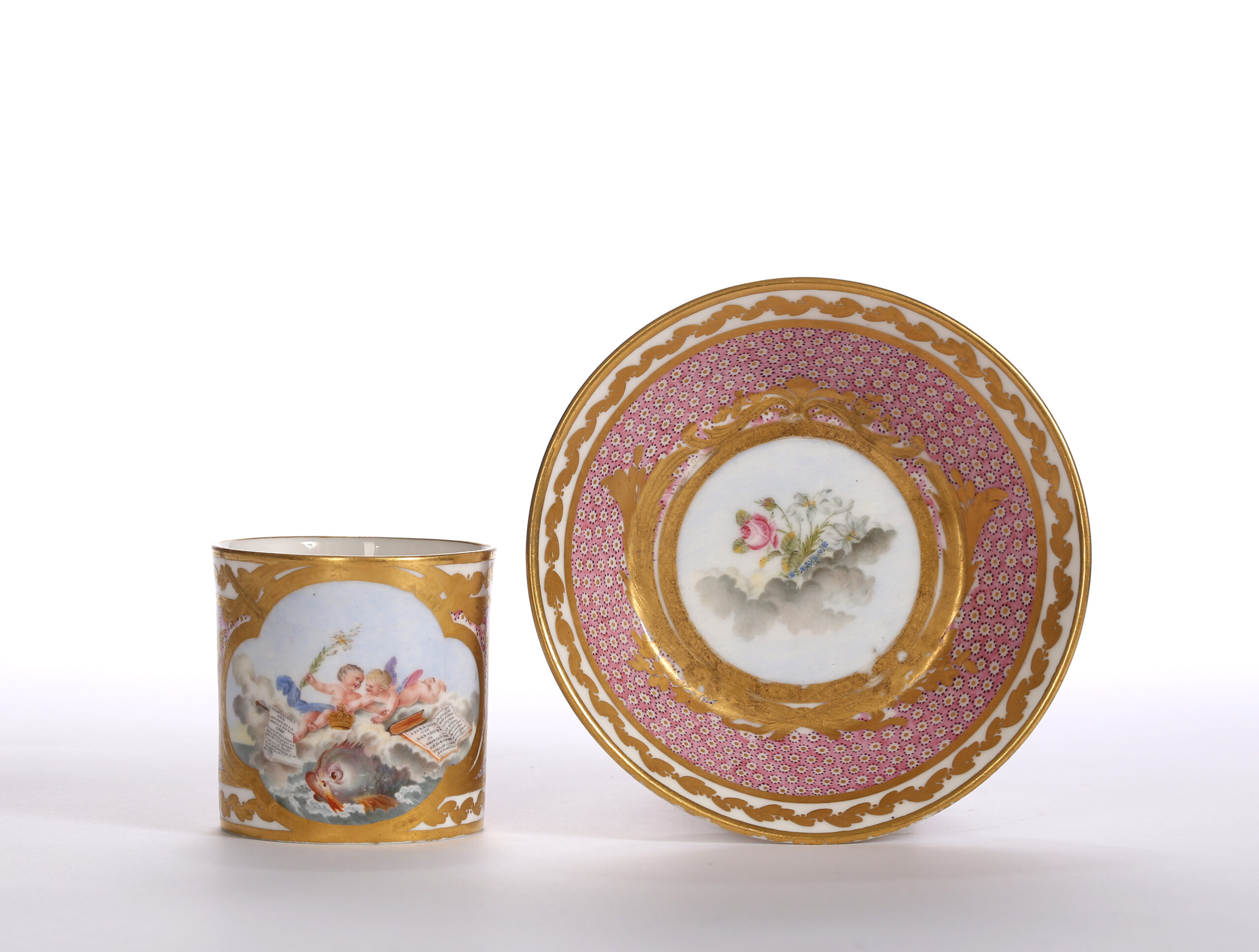 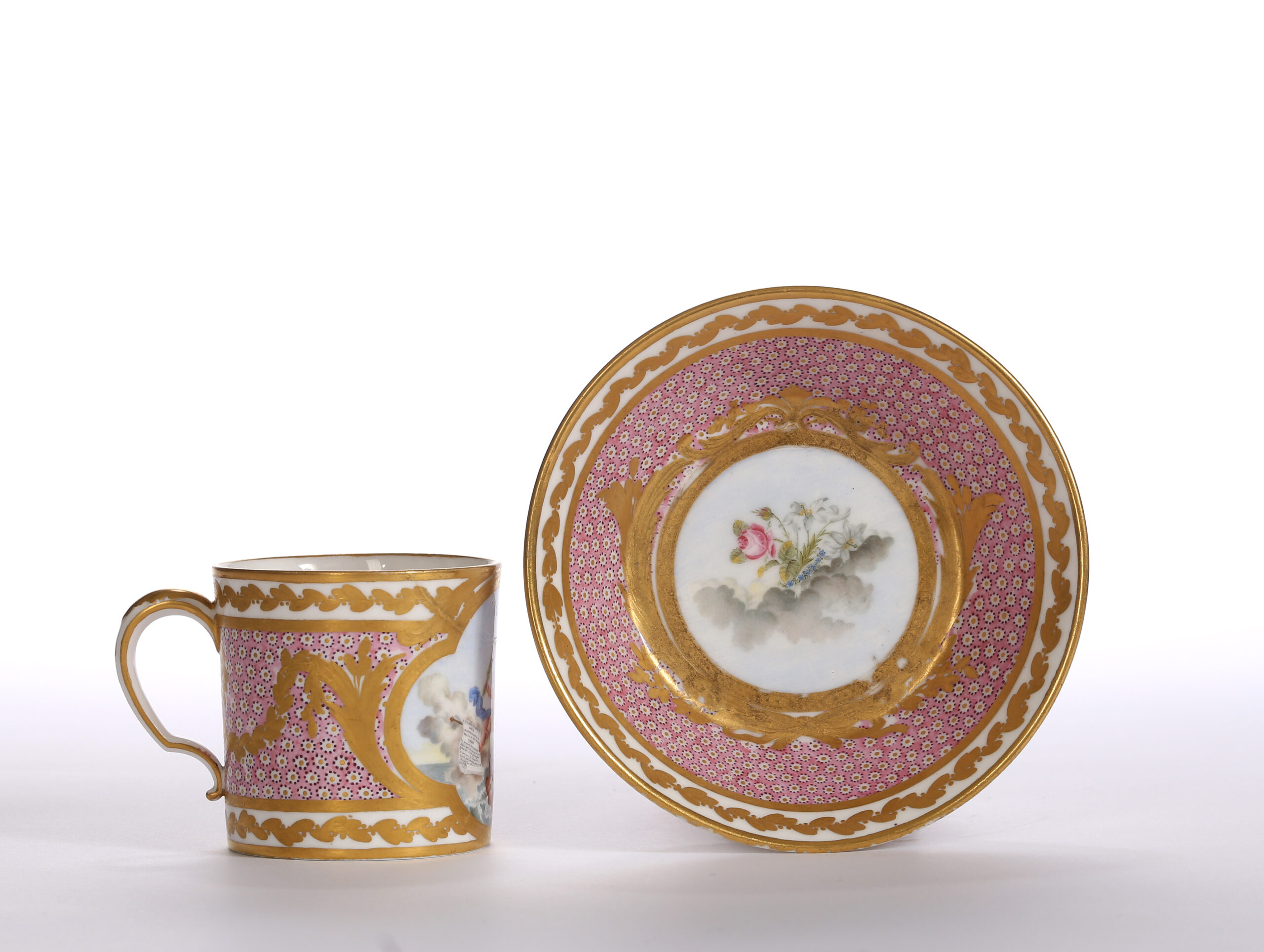 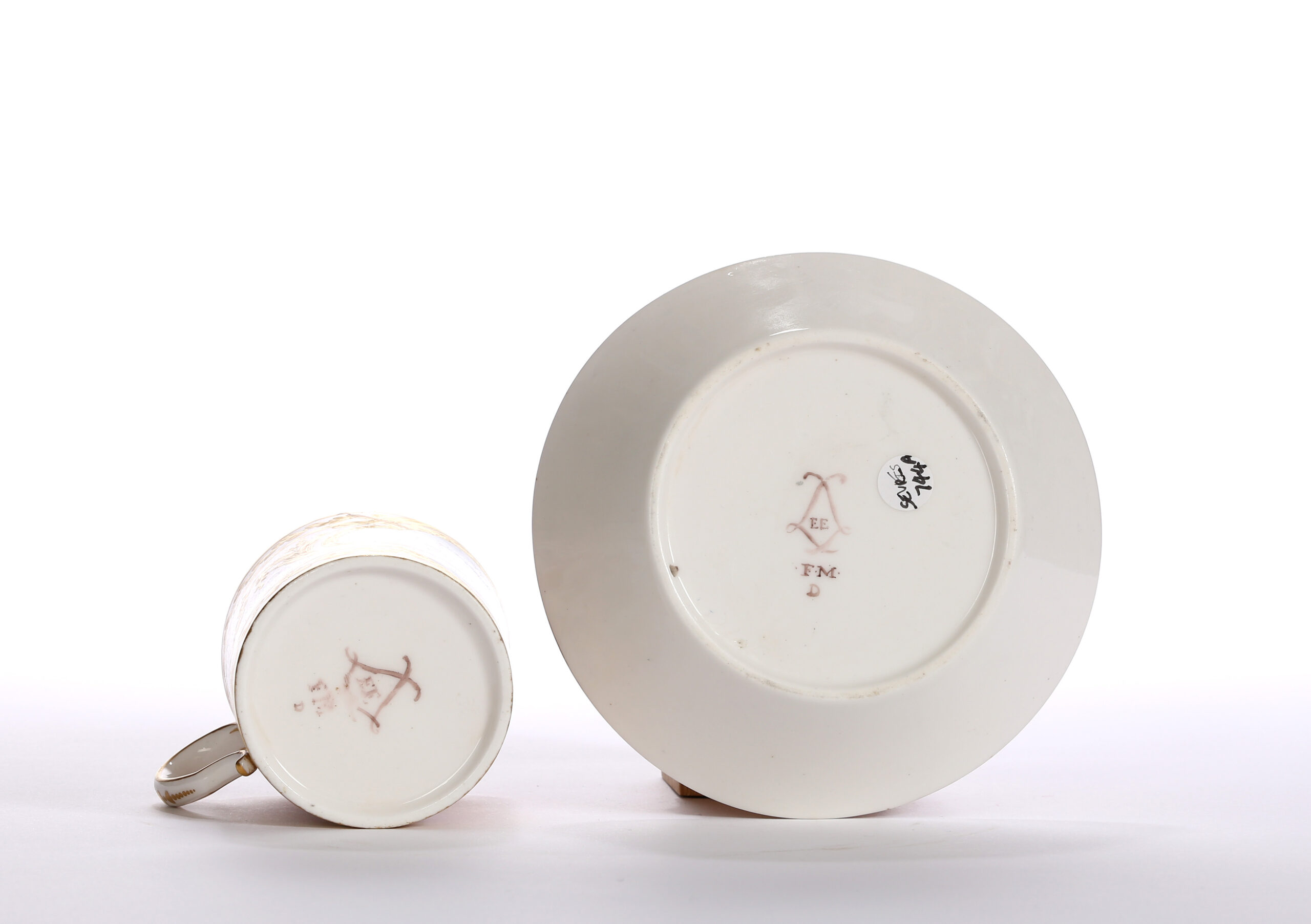 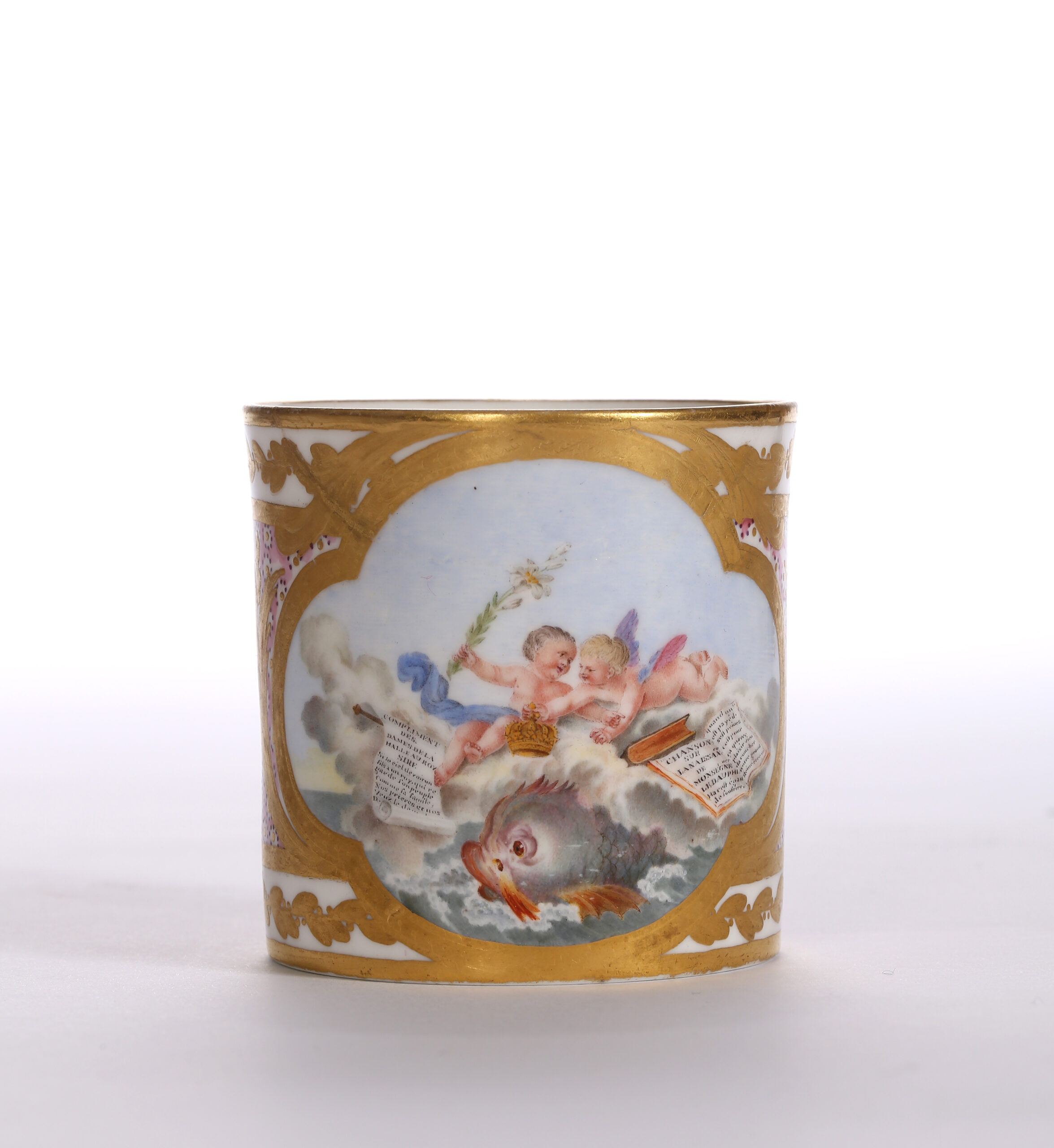 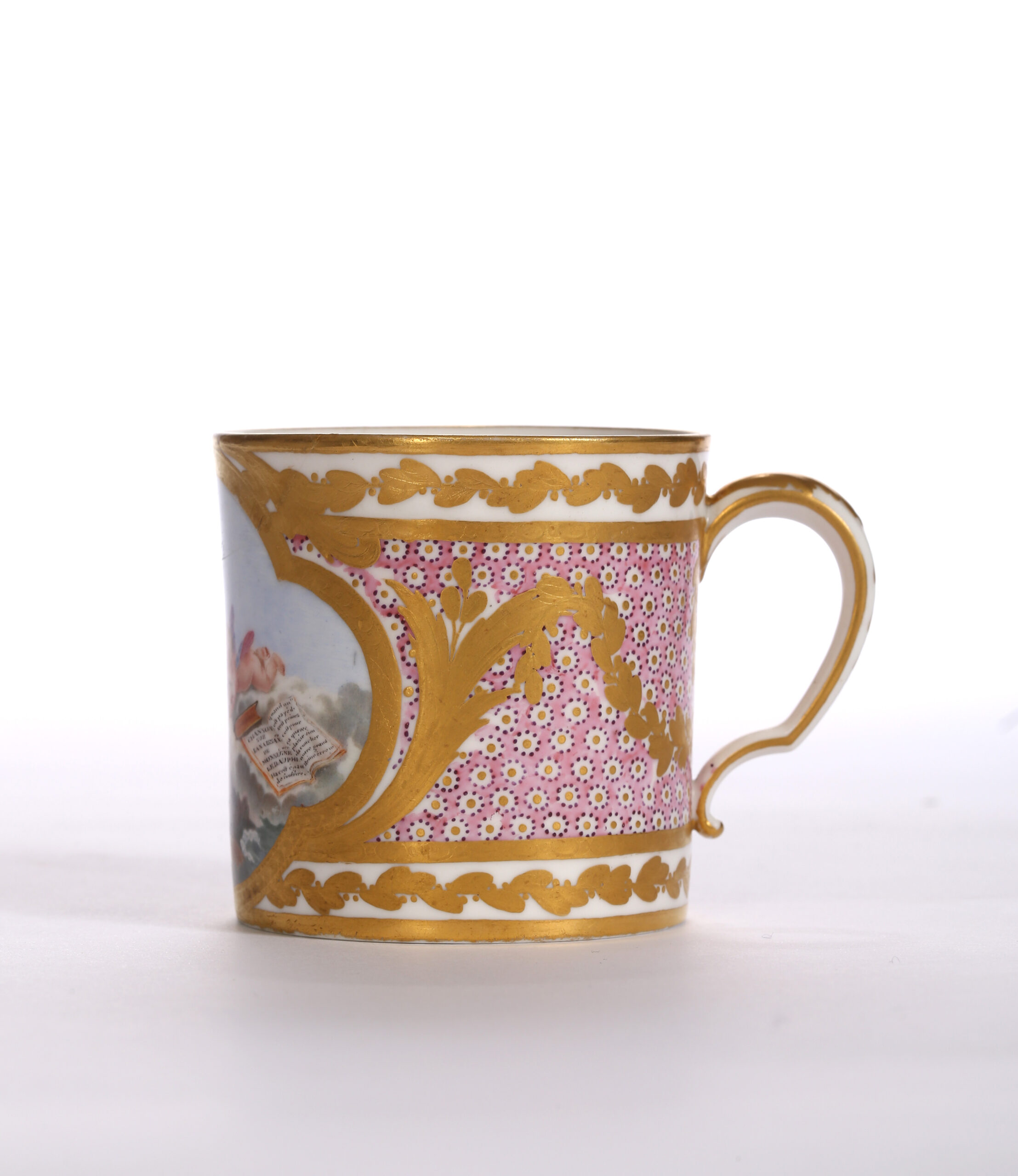 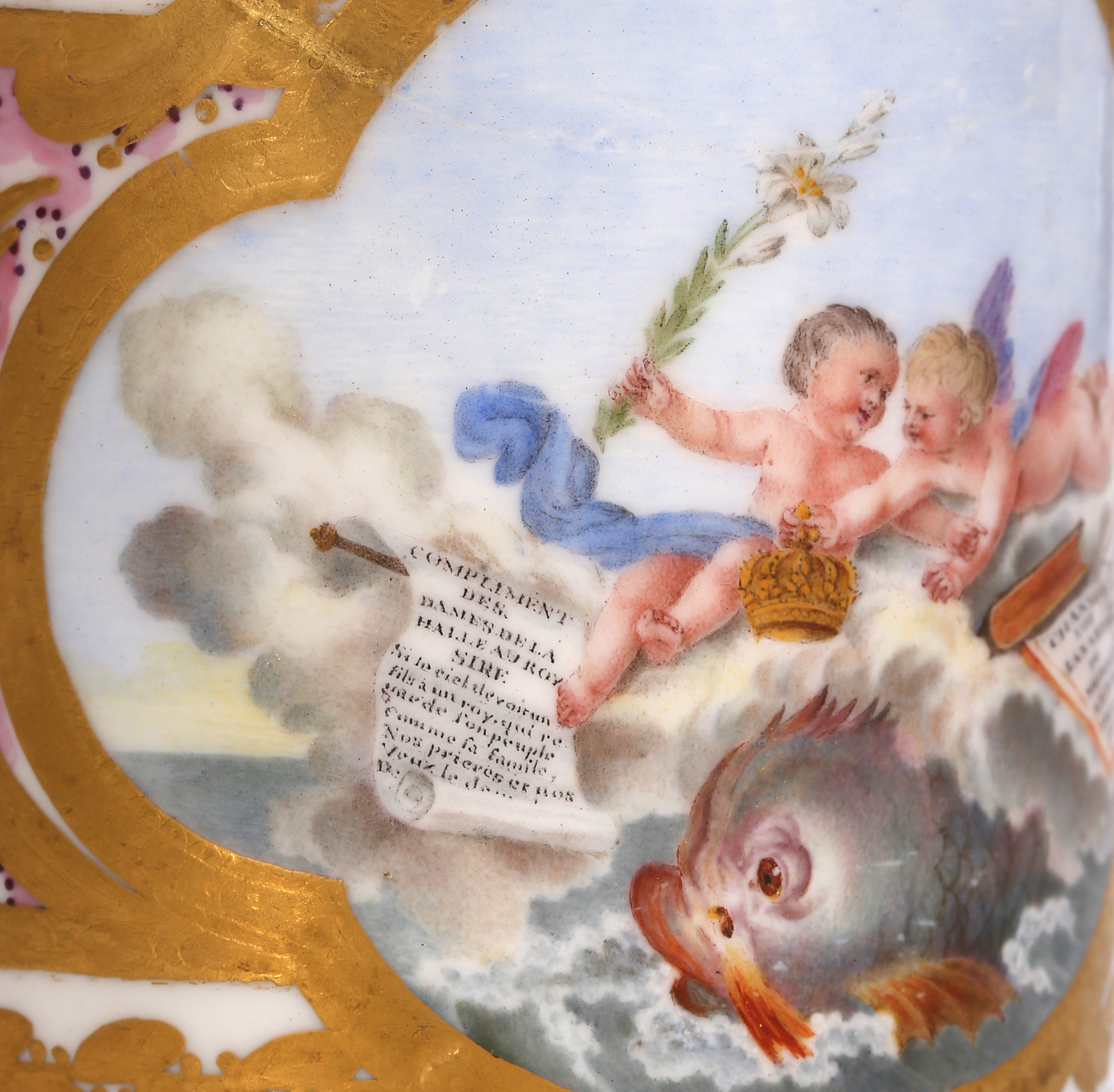 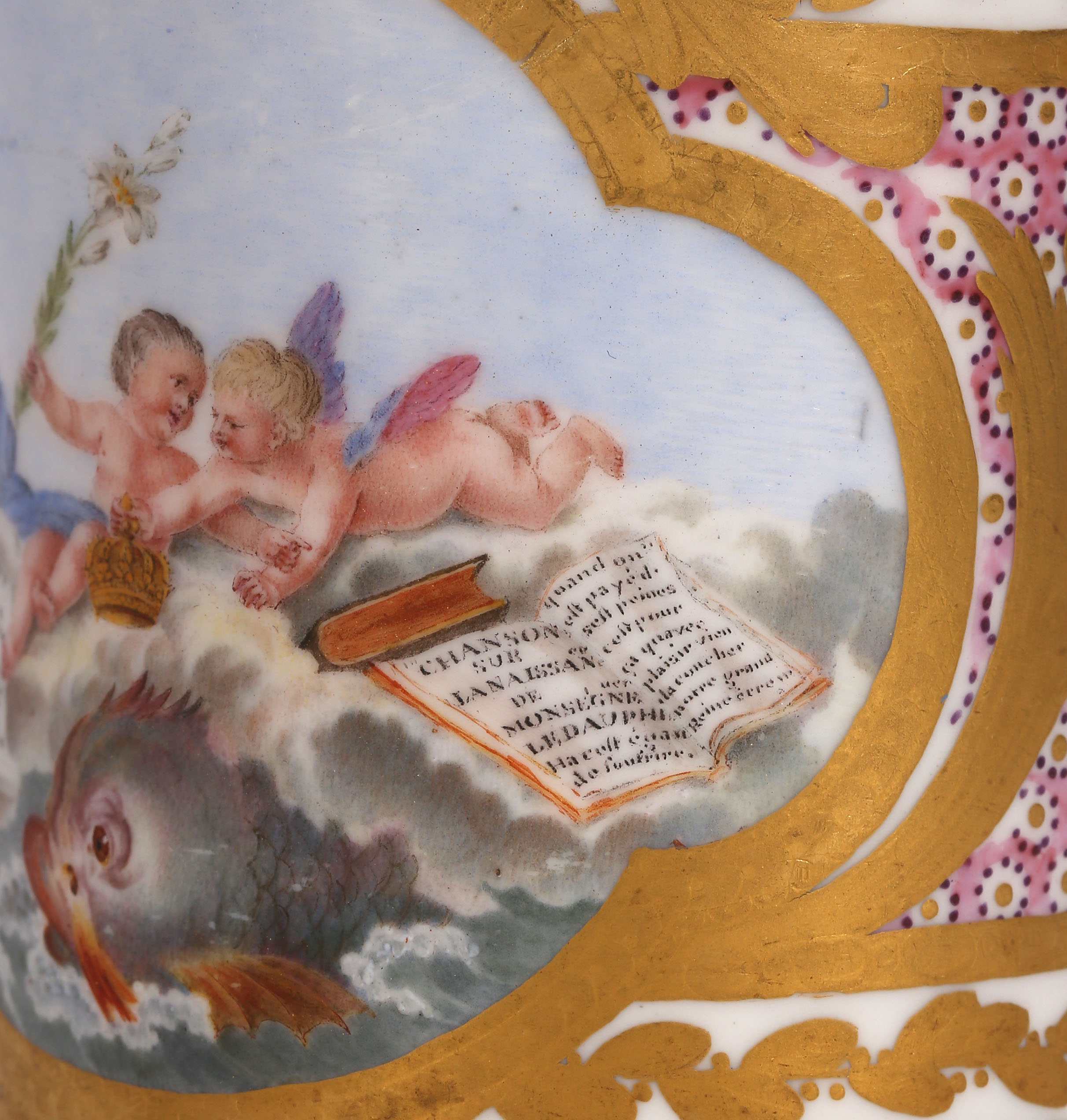 The cup with two putti, flanked by inscriptions on a scroll and book, reclining on a cloud, holding a lily and a crown over a dolphin riding the waves, within a quatrefoil gilt-edged panel reserved on a pink and gold oeil de perdrix ground, the saucer with a central gilt-edged panel of clouds with rose, lily and forget-me-nots and a gold berry-leafed border.

This cup and saucer commemorates a particular event; the visit to Versailles of Les Dames de la Halle shortly after the birth of the Dauphin Louis Joseph Xavier on 22nd October 1781.

The unfurled scroll on the cup is inscribed:

The open book to the right reads:

Les Dames de la Halle (also known as Les Dames des Halles) were a spirited group of working women selling fish, fruit and dairy products on the market stalls in Les Halles in Paris and were pivotal in the organisation of the distribution of food.  They were not given the privilege of being allowed to form a guild, but they had a vital commercial role as food retailers in the markets and were regarded as representatives of the working class.

Katie Jarvis in ‘Politics in the Marketplace‘, (2019), looks at the role and image of Les Dames before, during and after the Revolution.  Even though they had the reputation of being coarse and loud-mouthed, they were also named poissardes (fishwives), they acted as the traditional mouthpiece of the Third Estate in France during feast days and royal celebrations. Since the 13th century Les Dames de la Halle had been the link between the people and the king.  They were invited several times a year to visit the king and had special privileges bestowed on them, one of them giving them access to the king and queen’s boxes at public events including performances at the Comédie-Française. 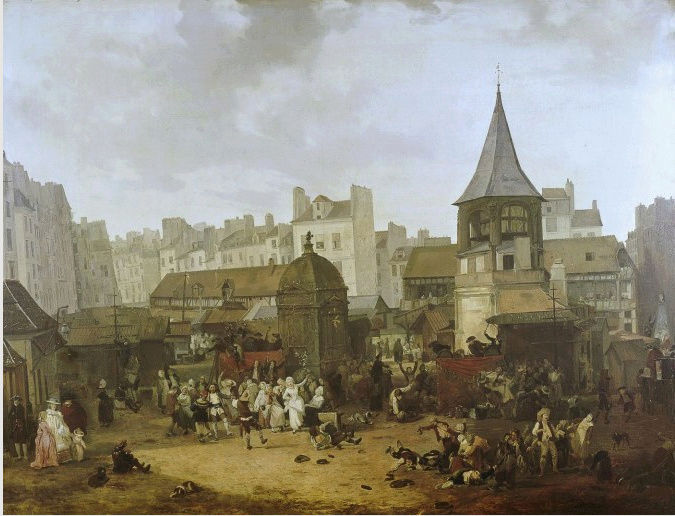 The birth of the Dauphin in 1781 was cause for great celebration in Paris and a banquet was organised for Les Dames at Versailles. In ‘Mémoires sur la vie privée de Marie-Antoinette, reine de France et de Navarre’, (1822), the memoire of Henriette Campan, lady-in-waiting to Marie-Antoinette, she recounts that a group of fifty of them, dressed in black silk and most of them wearing diamonds went to Versailles to express their good wishes to the new Dauphin. They were received at court in a ceremony ‘befitting their status’.  Three of them were admitted to see the Queen in her bedchamber and one of them gave a speech that had been prepared for her. Afterwards they were all offered a meal by the king.

The text on our cup was part of the speech to the king that was created for this occasion. The full text was:

The song on the book of the cup is perhaps written by Les Dames. According to Henriette Campan they wrote many songs and some verses of them were sung by the king and queen to the child. 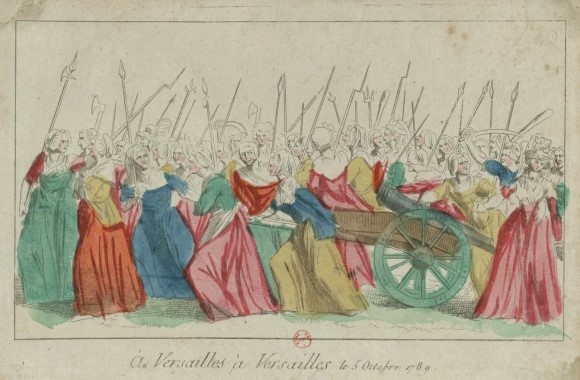 Les Dames de la Halle are best remembered for their march to Versailles eight years later, on the 5th of October 1789, nearly three months after the fall of the Bastille. Several hundred of the Dames des Halles led about 6000 Parisians to Versailles appealing to the king about the shortage of bread in the capital. The King received and reassured them and sent forty Dames des Halles back in royal carriages. They returned to Paris that night with a message from the king to the Parisians that he would send bread. The mob that had stayed behind at Versailles were still not satisfied and demanded the king himself to travel Paris. The next day Louis XVI gave in to the demands and the royal cortege left for Paris never to return to Versailles again.

Geoffrey de Bellaigue (Eriksen and de Bellaigue 1987) states that “in September 1781, in anticipation of the birth of an heir to the throne, Bachelier was engaged in designing allegories and symbols appropriate to the anticipated event.  During the period of 20 November 1781 to 25 March 1782 a range of cups and a few broth-basins were fired in the enamel kiln which were painted with dolphins, fleurs-de-lis and allegorical subjects, no doubt based on Bachelier’s sketches.” 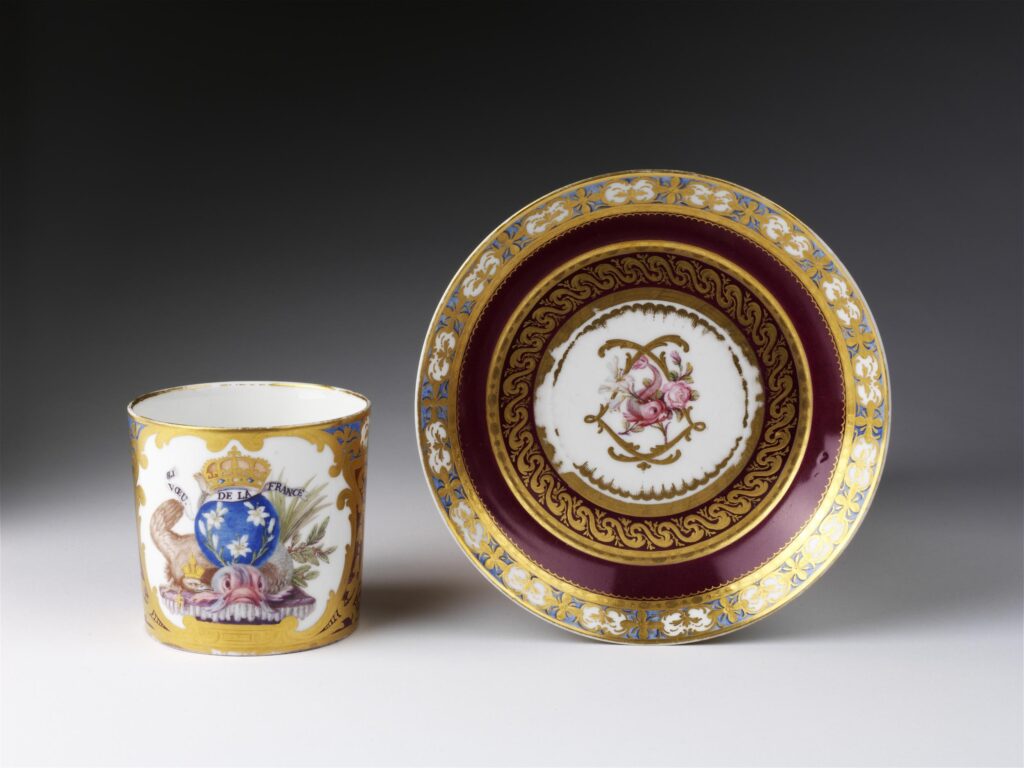 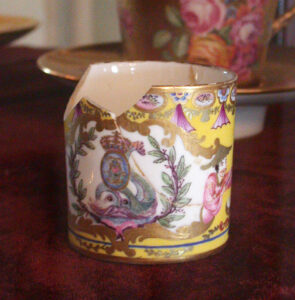 A cup commemorating the birth of the Dauphin, bought by the Grand Duke Paul of Russia, the son of Catherine the Great, and Duchess Maria his wife, visiting France incognito in 1782 as the Comte and Comtesse du Nord, is signed by the gilder Le Guay. Pierre Ennès in his Apollo article of March 1989 suggests that it was probably painted by Dieu, who had been regularly paid from January to April 1782, for ‘gobelets et soucoupe Chinois’. He also points out that the Grand Duke and Duchess had bought thirty-nine cups and saucers and that these were probably gifts to take home. The Dauphin cup however was retained and is still, although damaged, on view at the Pavlovsk Palace Museum.

None of the other known Sèvres pieces celebrating the birth of the Dauphin have connections to specific individuals or groups. Les Dames des Halles would have passed by the Sèvres factory en route to Versailles and on their return, it seems probable that our cup and saucer was commissioned by them or one of them on this occasion. Martin is listed in the Sèvres painter’s register of 1781and 1782 as painting a number of gobelet litron, the descriptions are too brief to identify this cup although one listed on 23rd February 1782 is described as an allegory which could describe it and the timing is consistent with a piece commissioned in late 1781.

The Dauphin Louis Joseph Xavier died in childhood at the age of seven from tuberculosis at the Chateau de Meudon. He was succeeded as Dauphin by his four-year-old brother Louis Charles.

We are grateful to Dr. Marie Tavinor for help in identifying the subject.

Other Sèvres pieces celebrating the birth of the Dauphin: