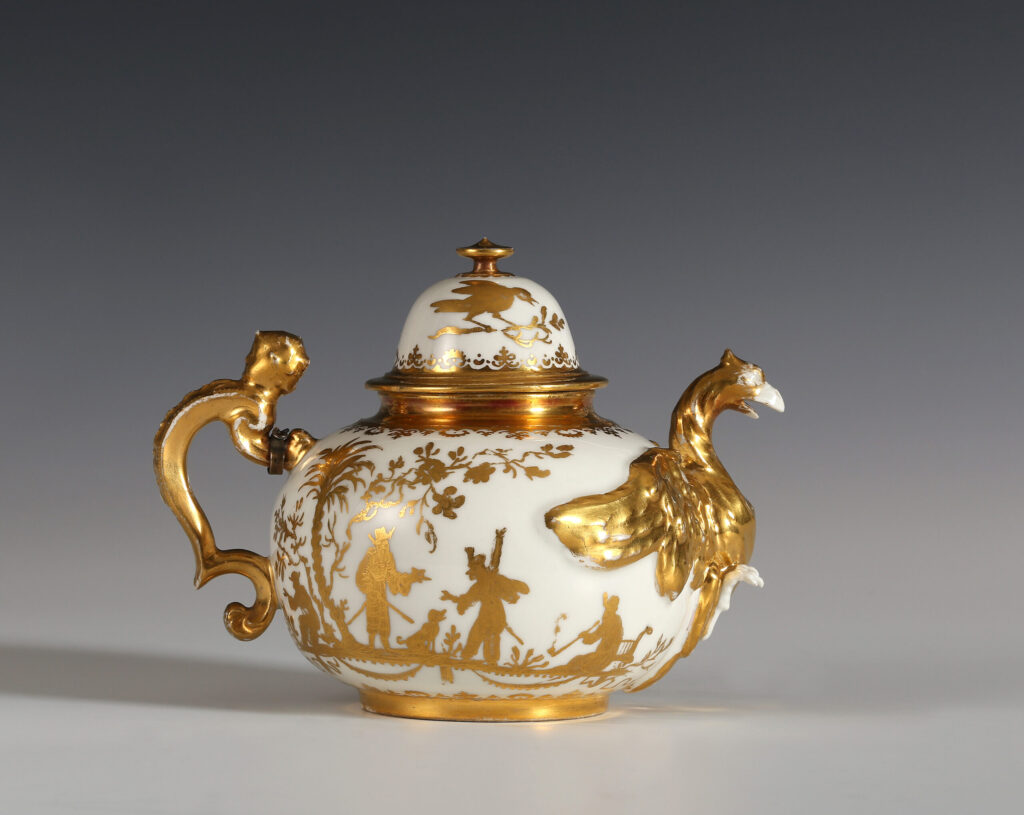 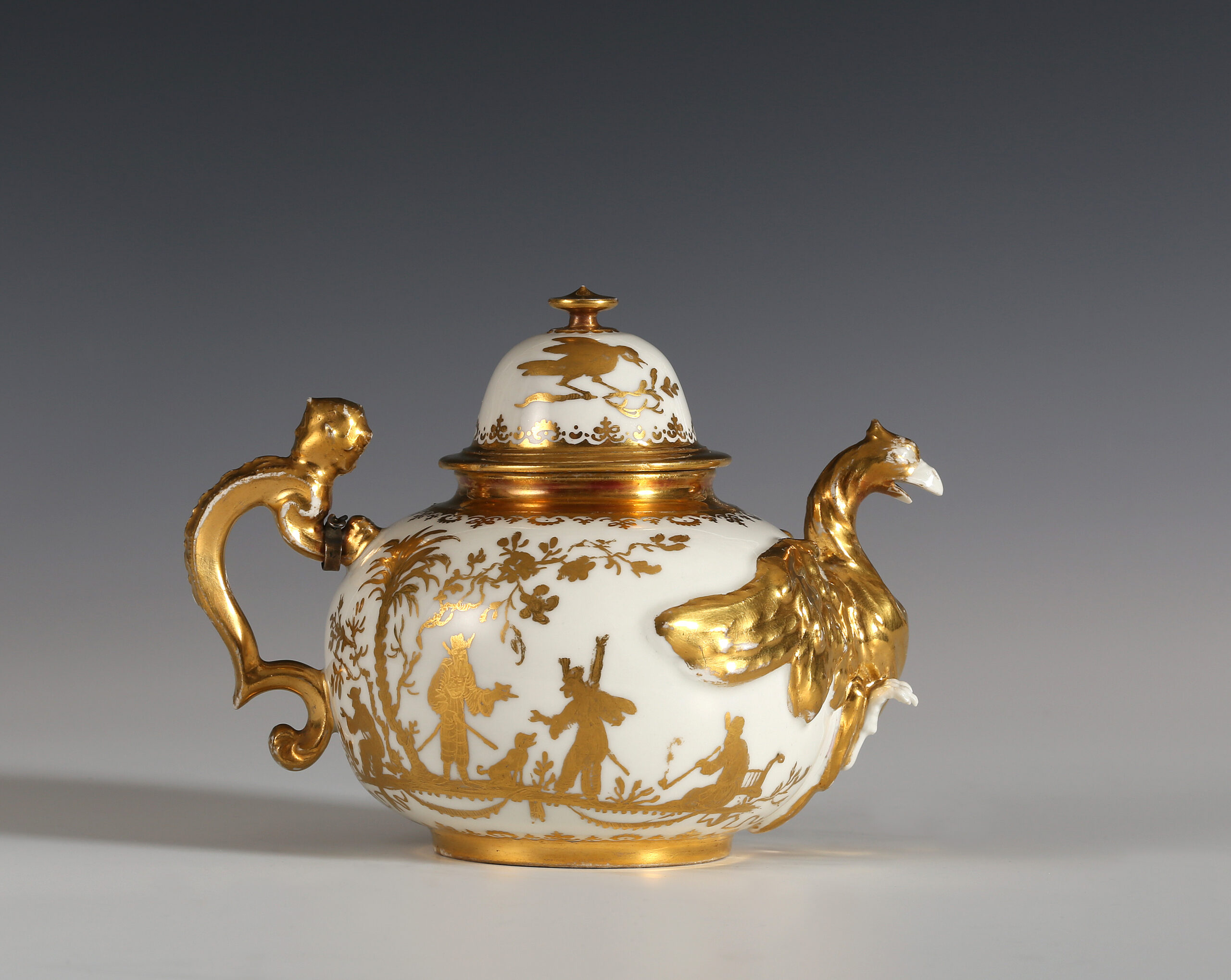 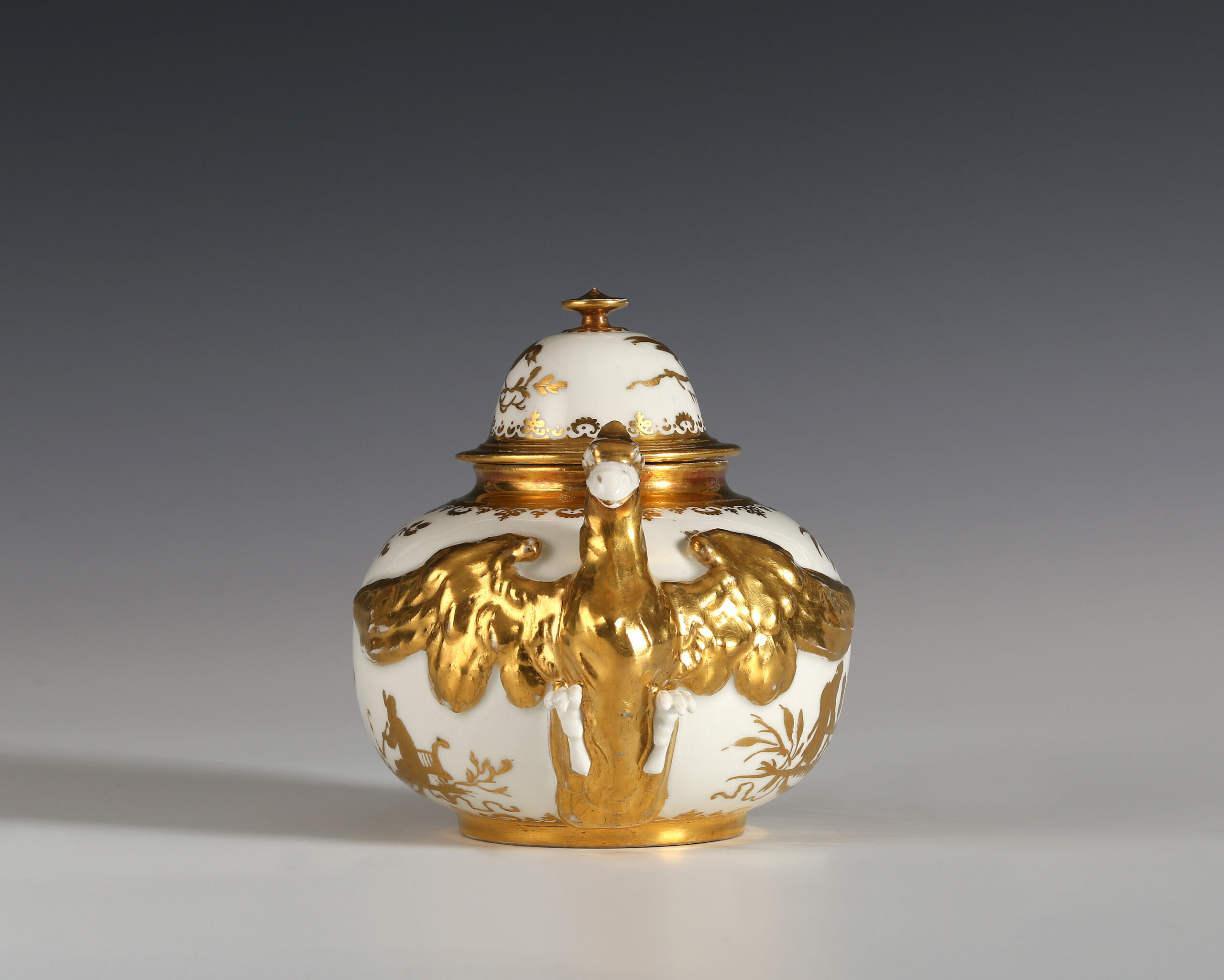 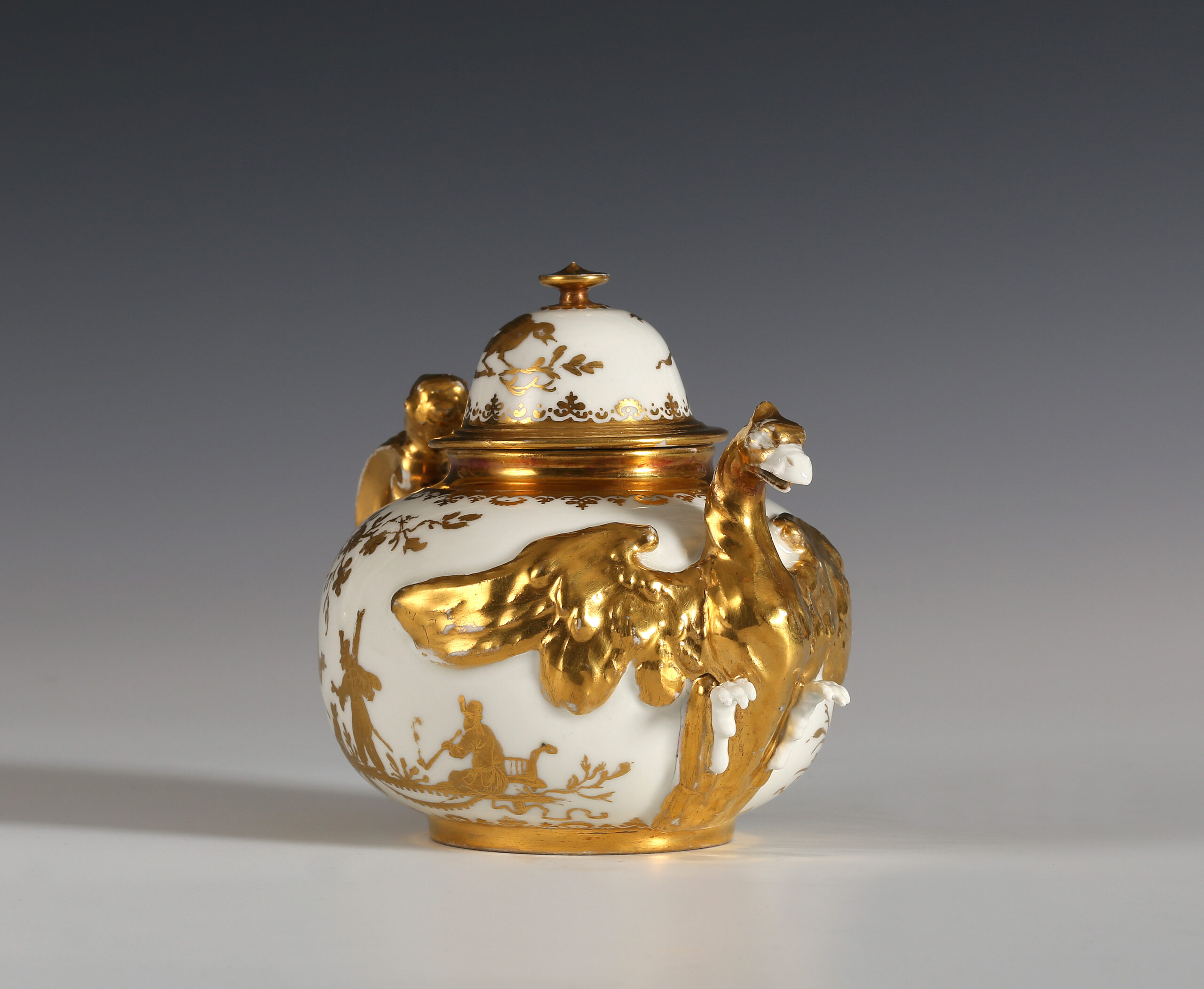 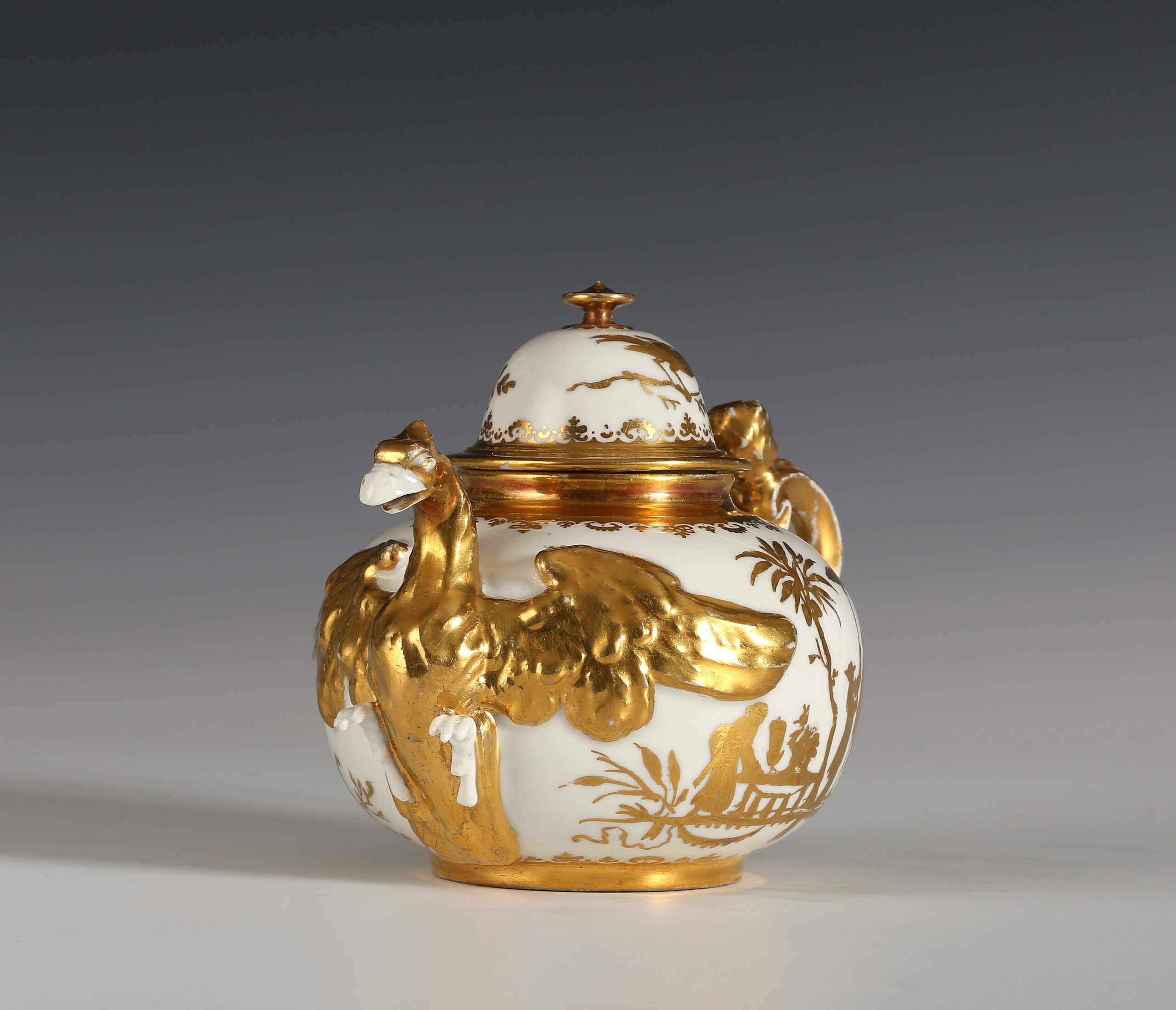 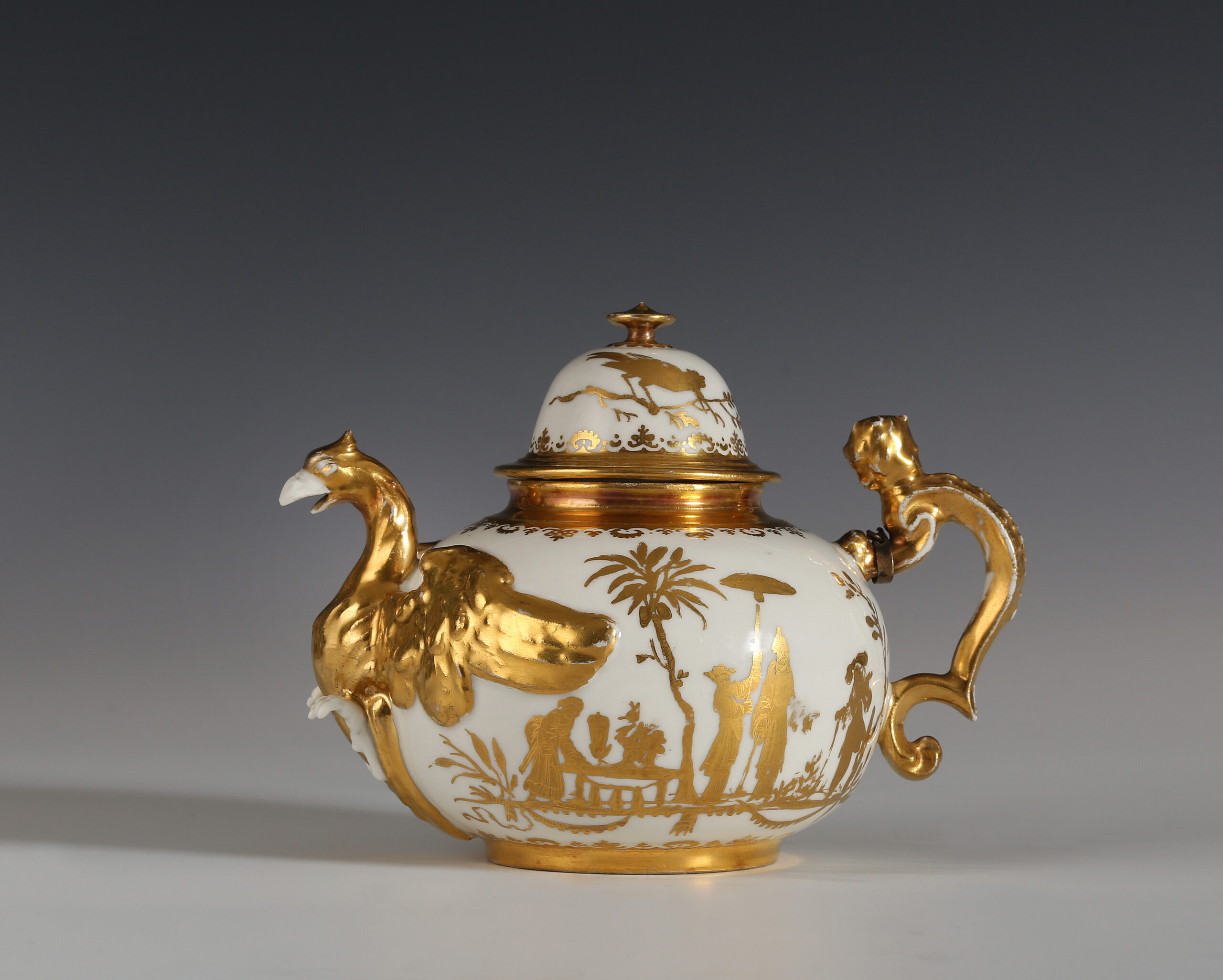 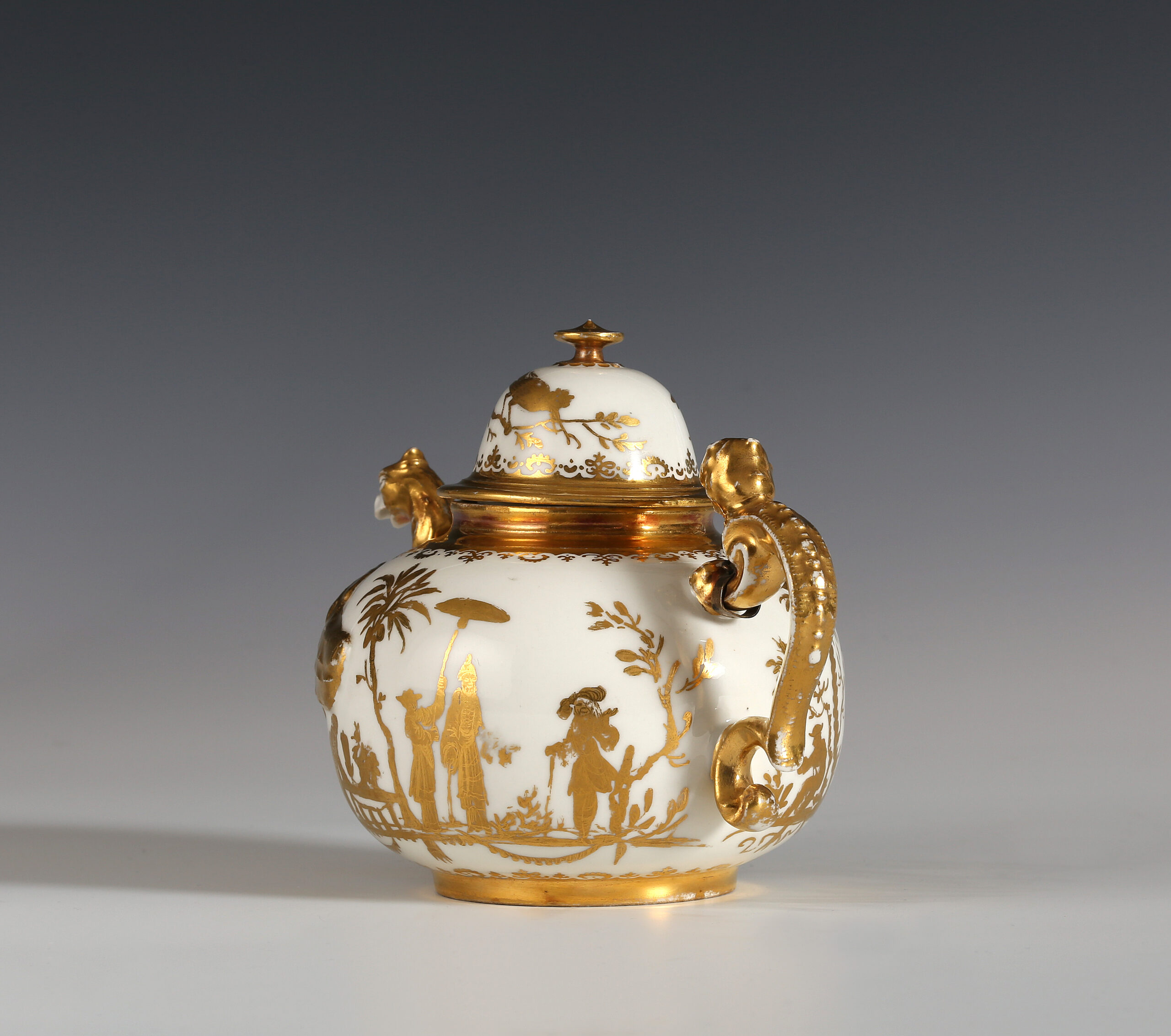 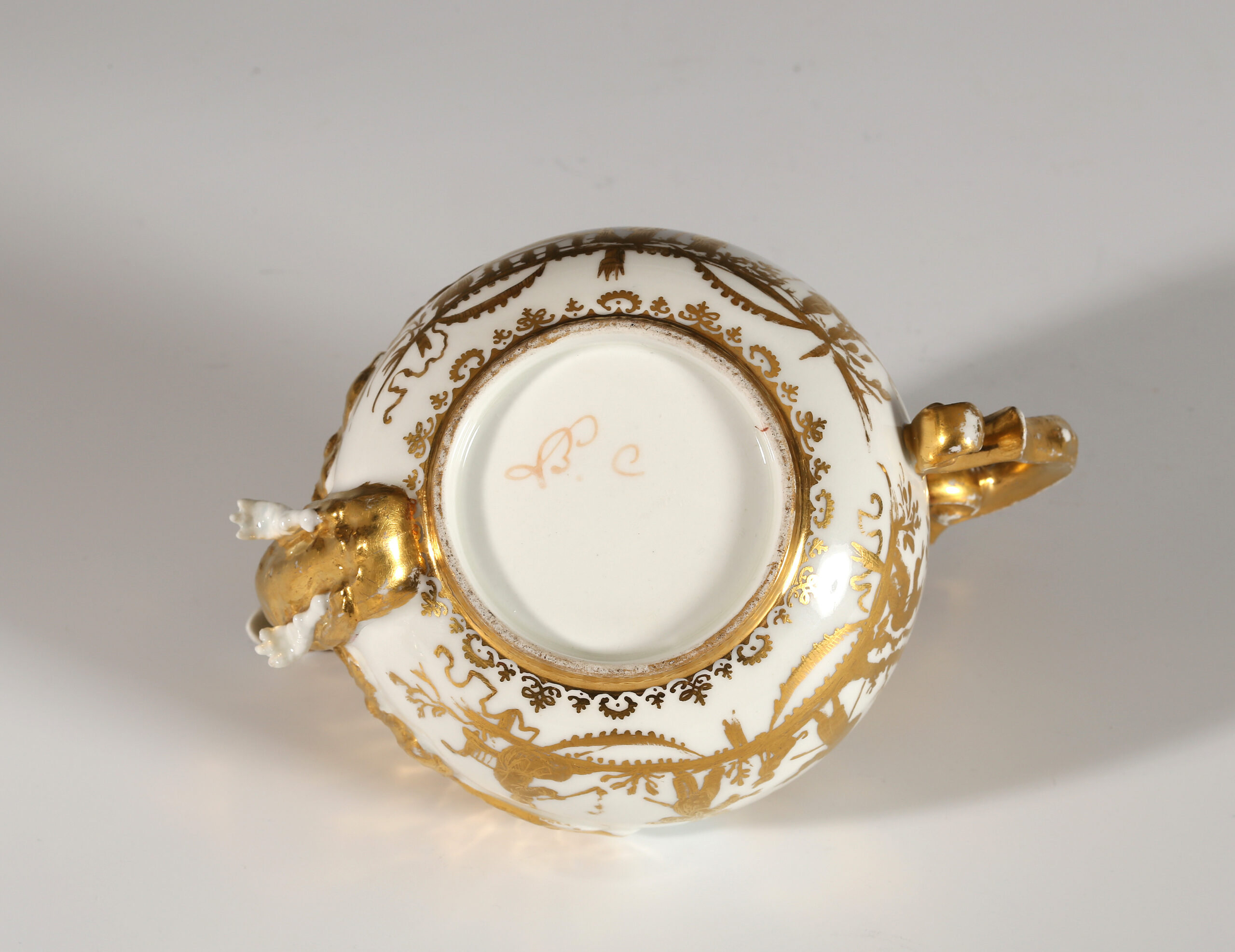 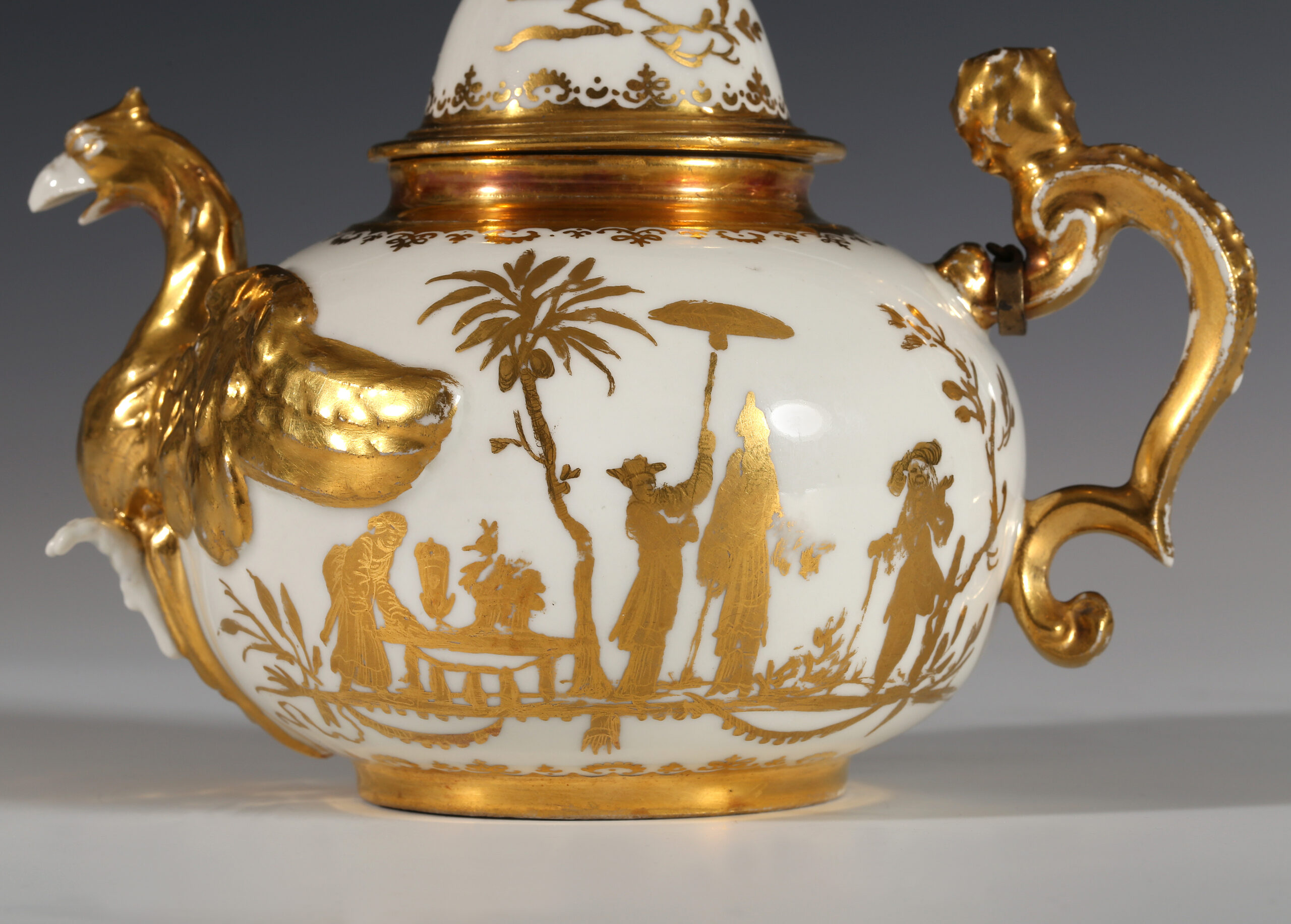 Böttger porcelain gilded by Bartholomäus or Abraham Seuter
Circa 1720
13.0 cm high 17.2 cm wide
Faint cursive gilder’s mark to the base

The globular body with high-domed cover, the spout modelled as an eagle with outspread wings and raised talons, the scroll handle surmounted by a child’s head. Richly gilt and burnished with chinoiseries accentuated by fine ciselure.

This is perhaps the most dramatic of early Meissen teapot forms and was probably one of the first models designed by Johann Jakob Irminger, the Dresden court silversmith, who was employed at Meissen since 1710 to create new designs (So die inventions und neuen Desseins besorget). The model first appears in Böttger stoneware with a slightly squatter body and is listed in the 1711 inventory of the Meissen manufactory as ‘Thee Krügel mit den ganzen Adler‘ [Teapot with the whole eagle], (Claus Boltz, 1982, pp. 7-40).

An example of this model, also gilded, is described in the 1721 inventory of the manufactory as ‘Ein sauberer, rund gedruckter am Halße etwas vergoldeter Theé Pot mit einem Adler statt der Schnauze und einem saubern Henckel, worauf ein Engle Köpffgen, nebst einen runden, etwas vergoldeten Deckel mit einem platten Knöpffgen‘ [A clean, round partially gilt teapot with a pinched neck with an eagle instead of the spout and a clean handle, on which there is a small angel head, along with a round, partially gilt handle with a flat finial], (Sebastian Kuhn from Marouf Collection, Part I, 5 December 2012, lot 17).

For Augustus the Strong, as King of Poland, an eagle with outspread wings was of particular significance as he established Poland’s highest order of chivalry, The Order of the White Eagle, on 1 November 1705, it was given to eight of his closest diplomatic and political supporters.

Meissen had long outsourced its gilding, most notably to George Funcke, a goldsmith based in Dresden, who worked as an enameller and gilder from 1713 until 1726. However, most of the known examples of this form of adlerkanne are decorated in styles that can be associated with the brothers, Bartholomäus and Abraham Seuter of Augsburg.

Siegfried Ducret wrote his great two volume study on the Augsburg decorators in 1971 before this direct connection with Bartholomäus Seuter and the Meissen factory had been discovered. It is now clear that the relationship between the factory and the Seuters was close and officially sanctioned, quite unlike the work of other independent outside decorators or hausmaler such as the less skilled Aufenwerth family.

Whilst no examples of Augsburg gilt chinoiseries signed by Bartholomäus Seuter are documented, his brother Abraham did sign a gilt chinoiserie teapot, a little later, in 1731 (Ludwig collection, Bayerisches Nationalmuseum, Ducret 1971, vol. I, colour plate I, and vol II fig. 64 & 65). Ducret suggested that Bartholomäus Seuter’s chinoiseries could be identified by comparison with those depicted on a plant pot in the engraving of him by Johann Jakob Haid. This plant pot is perhaps of Meissen porcelain since it has a moulded mascaron of a type often found on Meissen wares. 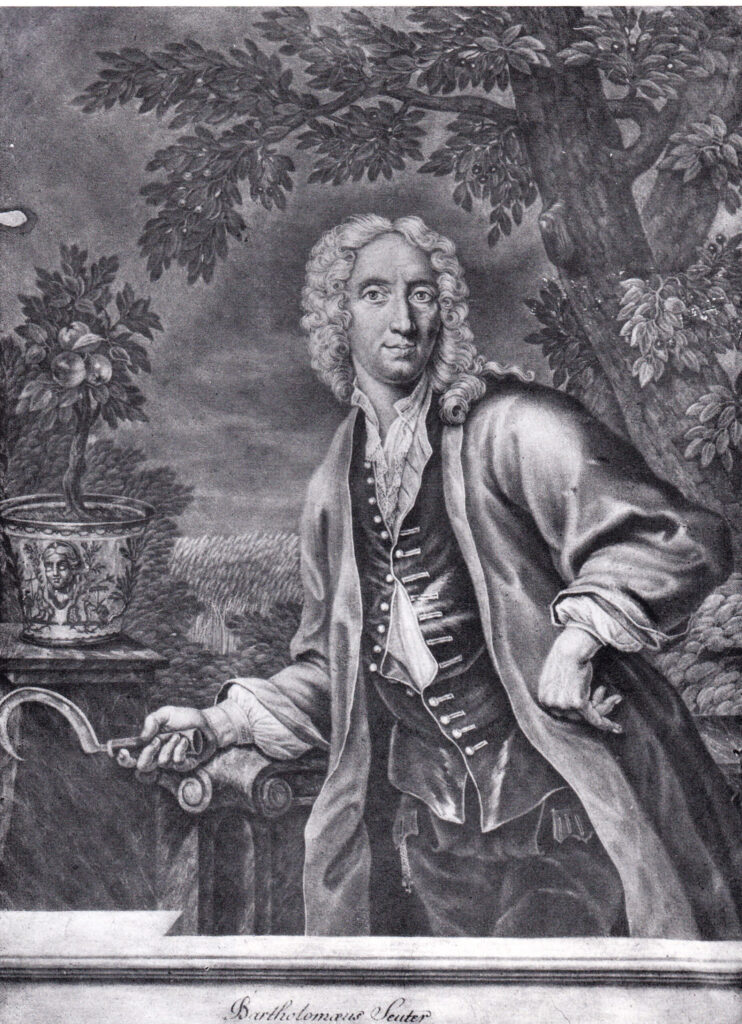 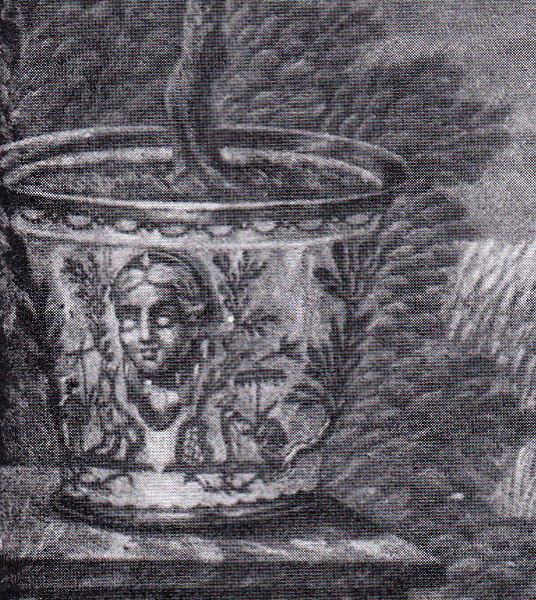 In 1726 Bartholomäus received permission from the Augsburg Council to ‘melt’ gold and silver on porcelain and to sell it [auf porzellan zu Schmelzen und auch zu verkaufen] which was described as “his Invention” on his licence. He ran his workshop “Unter den Wäschen” from 1717 until his brother Abraham’s death in 1747.

Bartholomäus Seuter was evidently a businessman of substantial status since, after his marriage to a wealthy dyer’s daughter, he also entered the silk dying trade and received a privilege, from the Emperor in Vienna, “to dye all silk objects”. It is unclear how much actual decorating Bartholomäus Seuter did himself, nor is it obvious how to differentiate between his work and that of his brother Abraham. Ducret considered it possible to do so through their use of distinctive border patterns.

Although Augsburg is 450 kilometres distant, the factory clearly also had a close relationship with the goldsmiths of Augsburg as is evident from the numerous silver-gilt mounts supplied by Elias Adam, a goldsmith specialising in mounting small objects.

Condition:
The upper part of the left claw of the eagle restored, chip to cover restored, the gilding and ciselure on our example is particularly well preserved in comparison to many of the other known examples

Provenance:
“Aus Fränkischem Adelsbesitz/Schlossinventar”: from a Franconian baronial family where it had probably been since the early 18th century. It was recently found in a cupboard in the castle