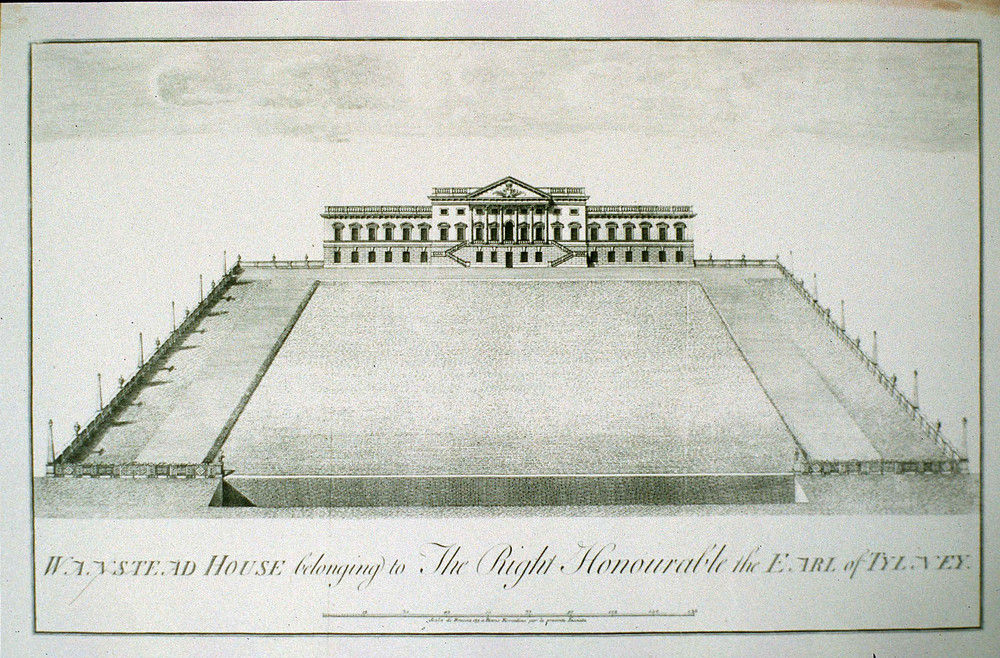 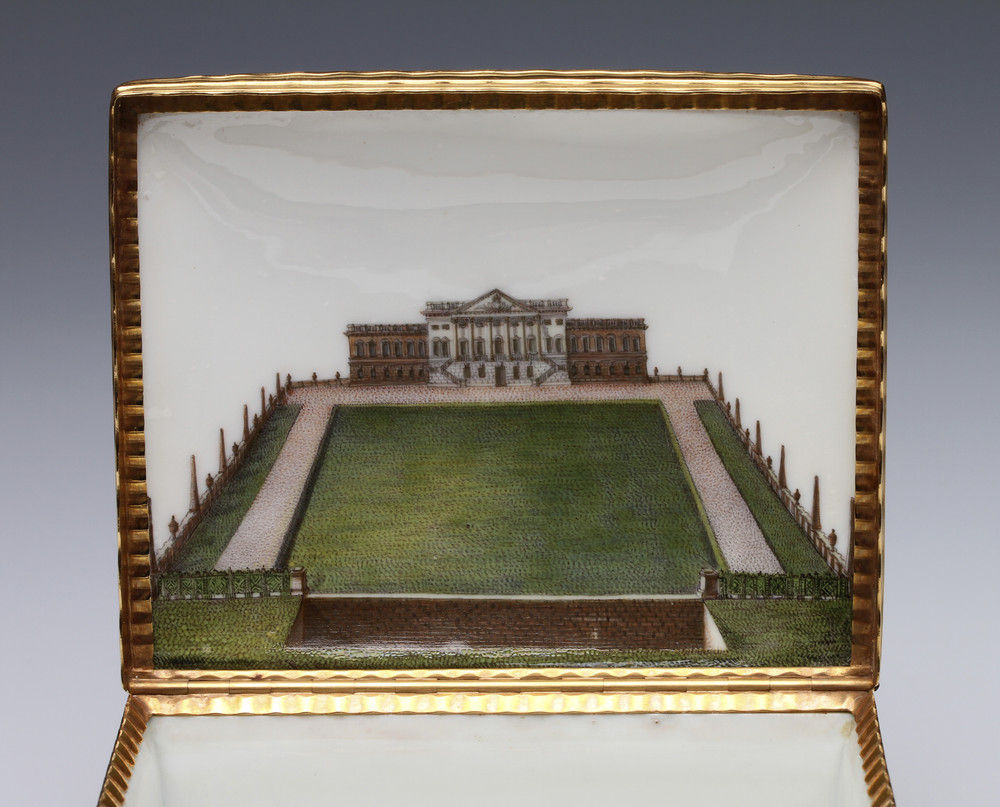 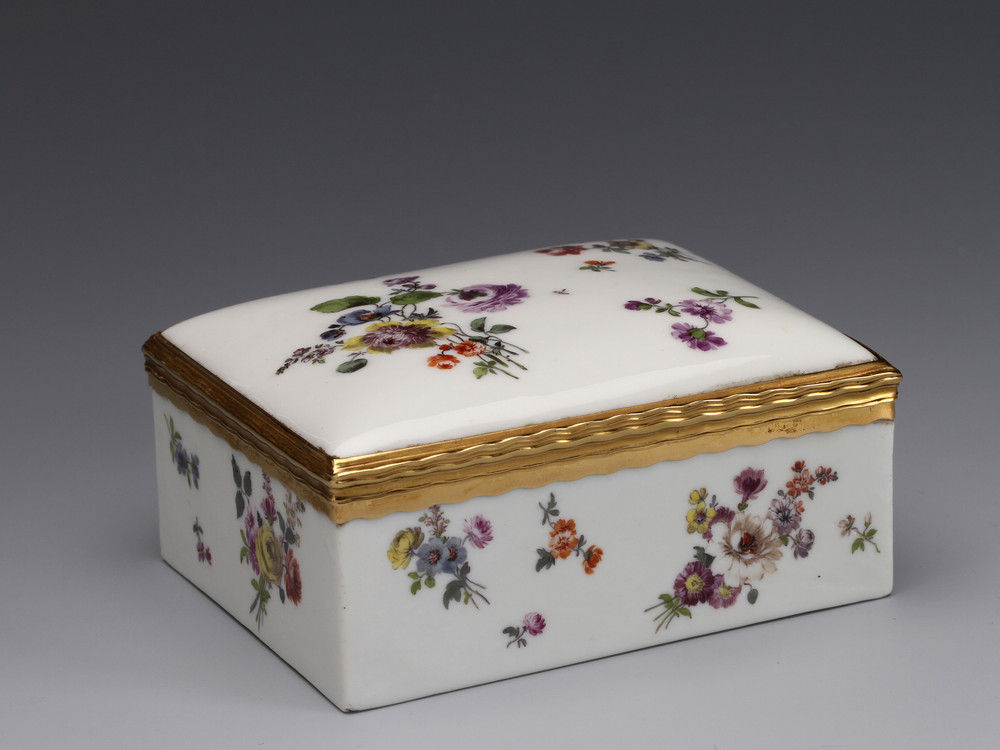 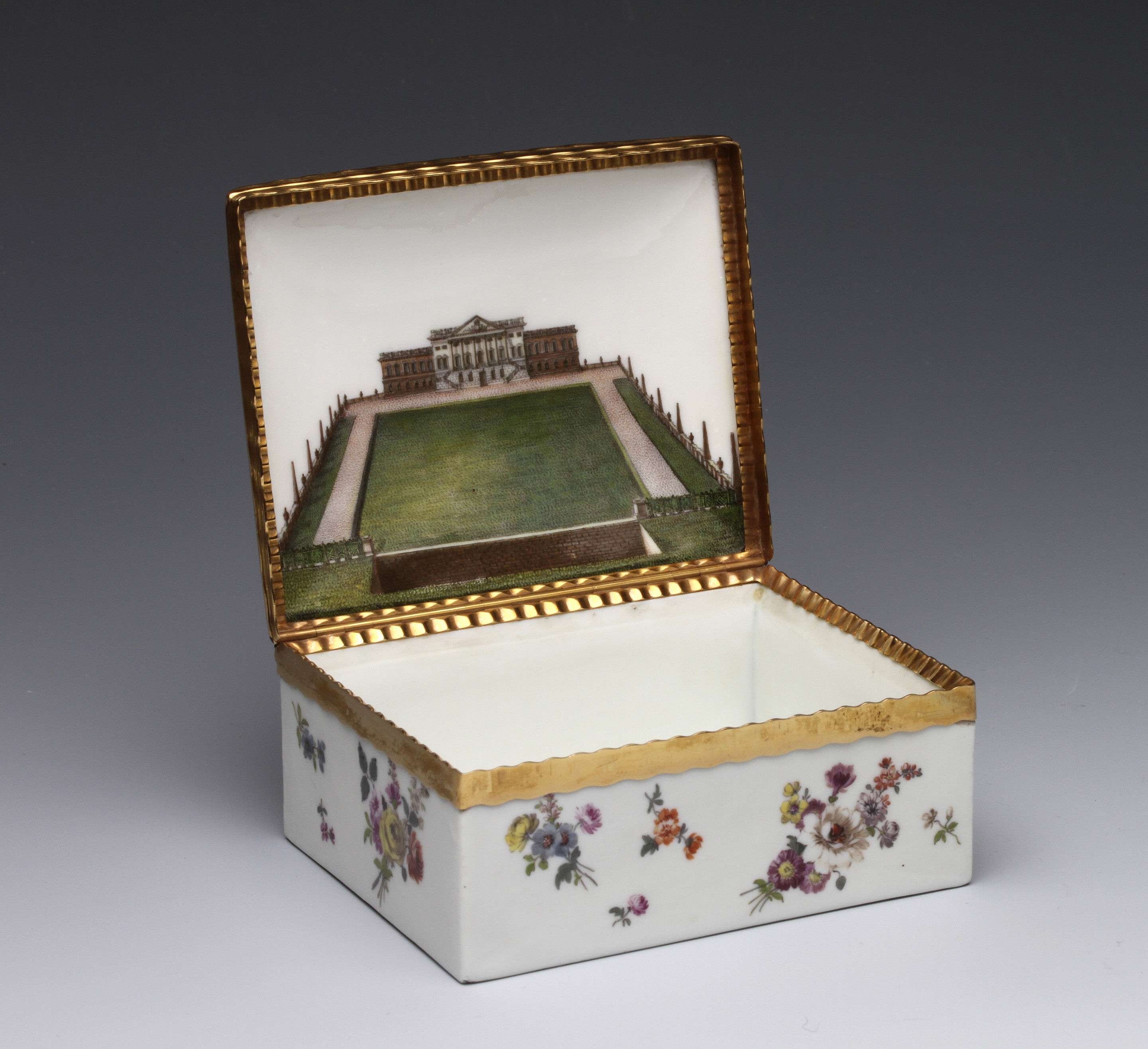 Slightly larger than a typical pocket snuff box, the interior of the domed cover painted with a view of Wanstead House showing the West Front Courtyard with its ‘ha-ha’ and elaborate railings ornamented with urns and obelisks taken from an engraving found in Colen Campbell’s Vitruvius Britannicus and also issued separately. The exterior with bunches of deutsche blumen.

Wanstead House was considered the masterpiece of the Scottish architect Colen Campbell. It was commissioned by Sir Richard Child in 1715 in the emerging Palladian style on a scale to rival mansions such as Blenheim Palace. Campbell claimed that it had the first classical portico in England. It was completed in 1722. Sir Richard was created 1st Earl Tylney in 1731 and was succeed by his son John, the 2nd Earl, in 1750.

Apart from a few armorial services this is only the second piece of 18th century Meissen known with a specifically commissioned British subject. The other, a slightly smaller box in the collection of the Earl of March and Kinrara at Goodwood, is painted with a portrait of Lady Caroline Fox, the daughter of the Duke of Richmond who eloped with the ambitious politician Henry Fox. Lady Caroline was reconciled with her parents and Henry Fox commissioned three boxes (a table box, a man’s snuff box and a lady’s snuff box) through his friend Sir Charles Hanbury Williams, the British envoy to the court of Saxony, only one survives.

Tim Couzens, who has studied the unpublished Tylney letter transcripts, has established that John Tylney, the 2nd Earl Tylney, the owner of Wanstead House, visited Dresden on his way home to England in January to March 1754. There is no mention, in his correspondence, of a visit to the Meissen factory, but, given that he was in Germany for three months, got an invitation to the Court of Brunswick from the then Queen mother and saw Frederick the Great, it is likely that he visited the factory and commissioned this box on that occasion.  The engraving of Wanstead West Front Courtyard, that is the source of the painting on our box, is after some improvement work also mentioned in the correspondence, and completed in 1753-4, so this commission must also have been a celebration of that. Tylney was accompanied on this part of the tour by Lord Bruce, later 1st Earl of Aylesbury. He spent much of his life in Italy on the Grand Tour and died in Naples.

The fortunes of the Tylney family waned and culminated in a spectacular bankruptcy and sale of the contents of the house in 1822 from June 10th to the 21st followed by further sales that year. The house was demolished in 1822.

The original gold mounts are chased with a wave pattern.

Condition:
Minute chip to one corner

Reference:
We are grateful to Tim Couzens for generously sharing his unpublished research.