A DOCCIA FIGURE OF DIONYSUS SARDANAPALUS 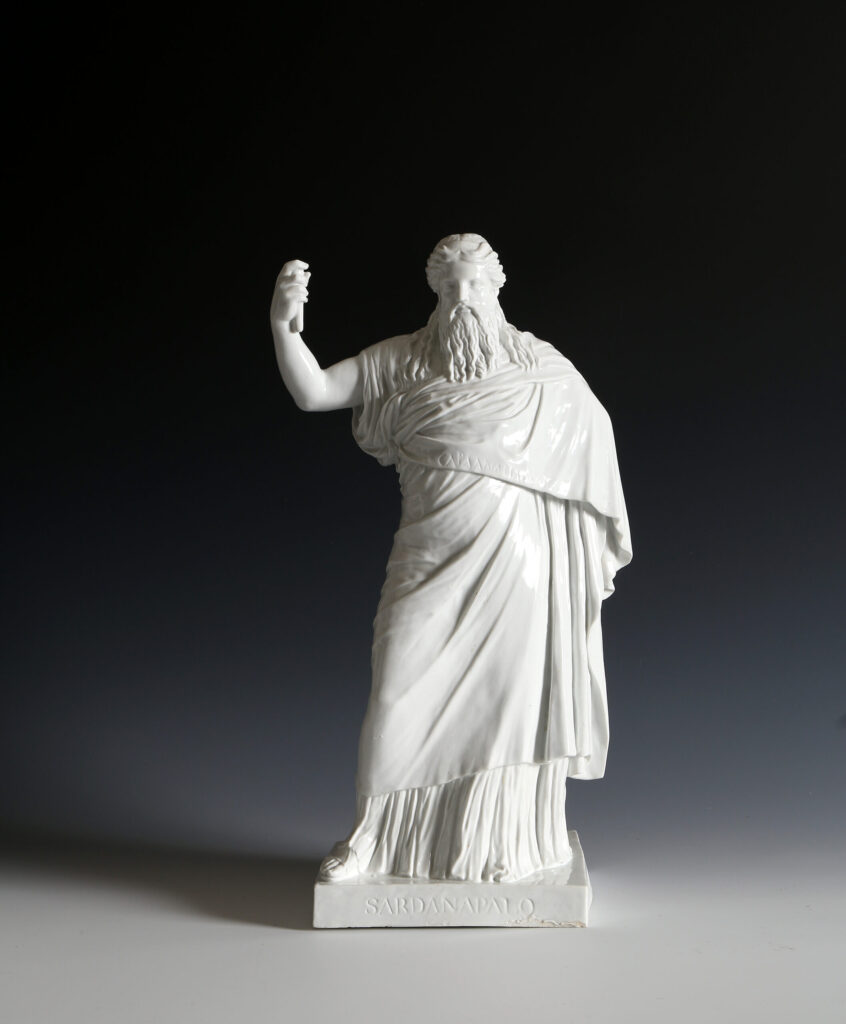 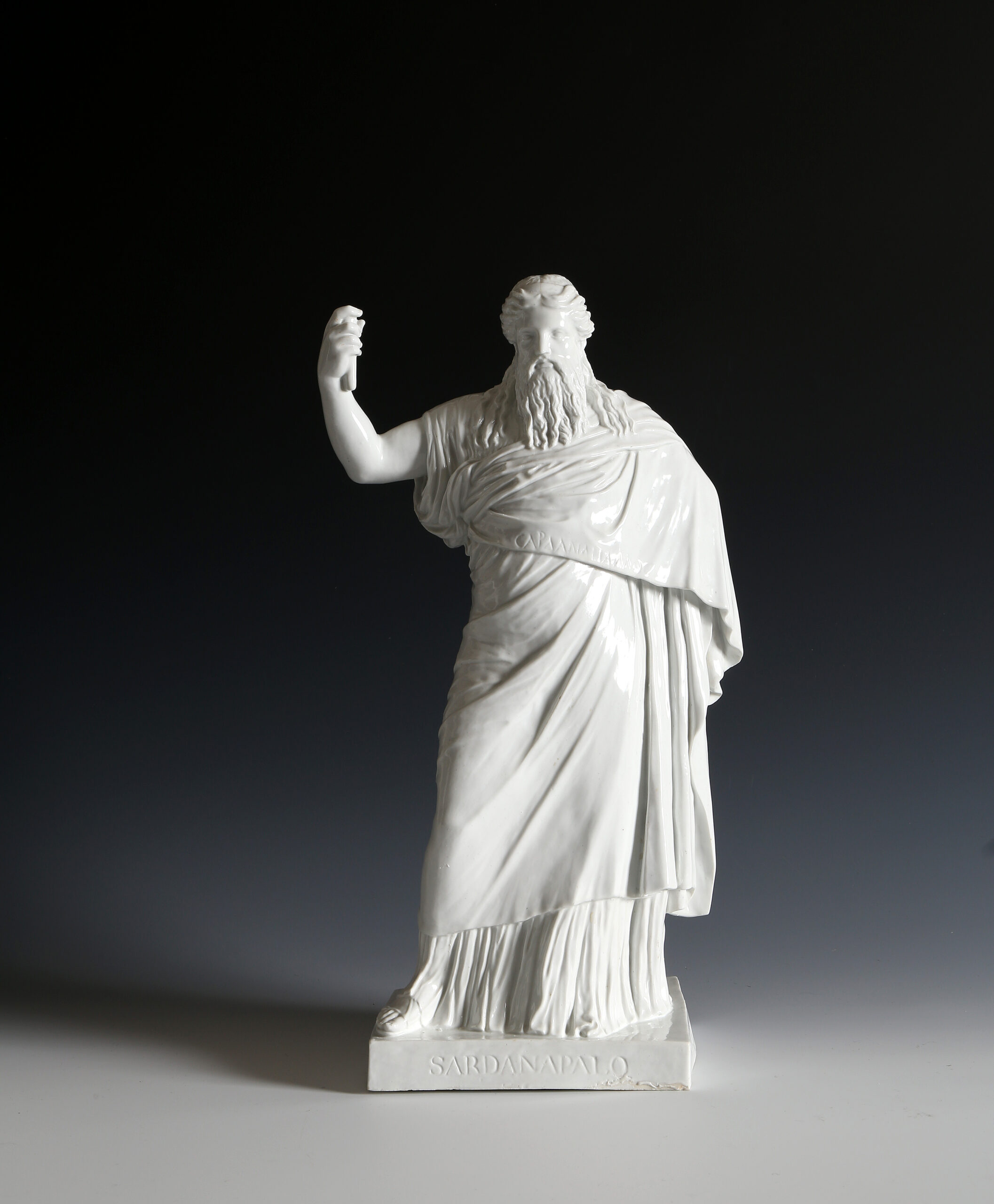 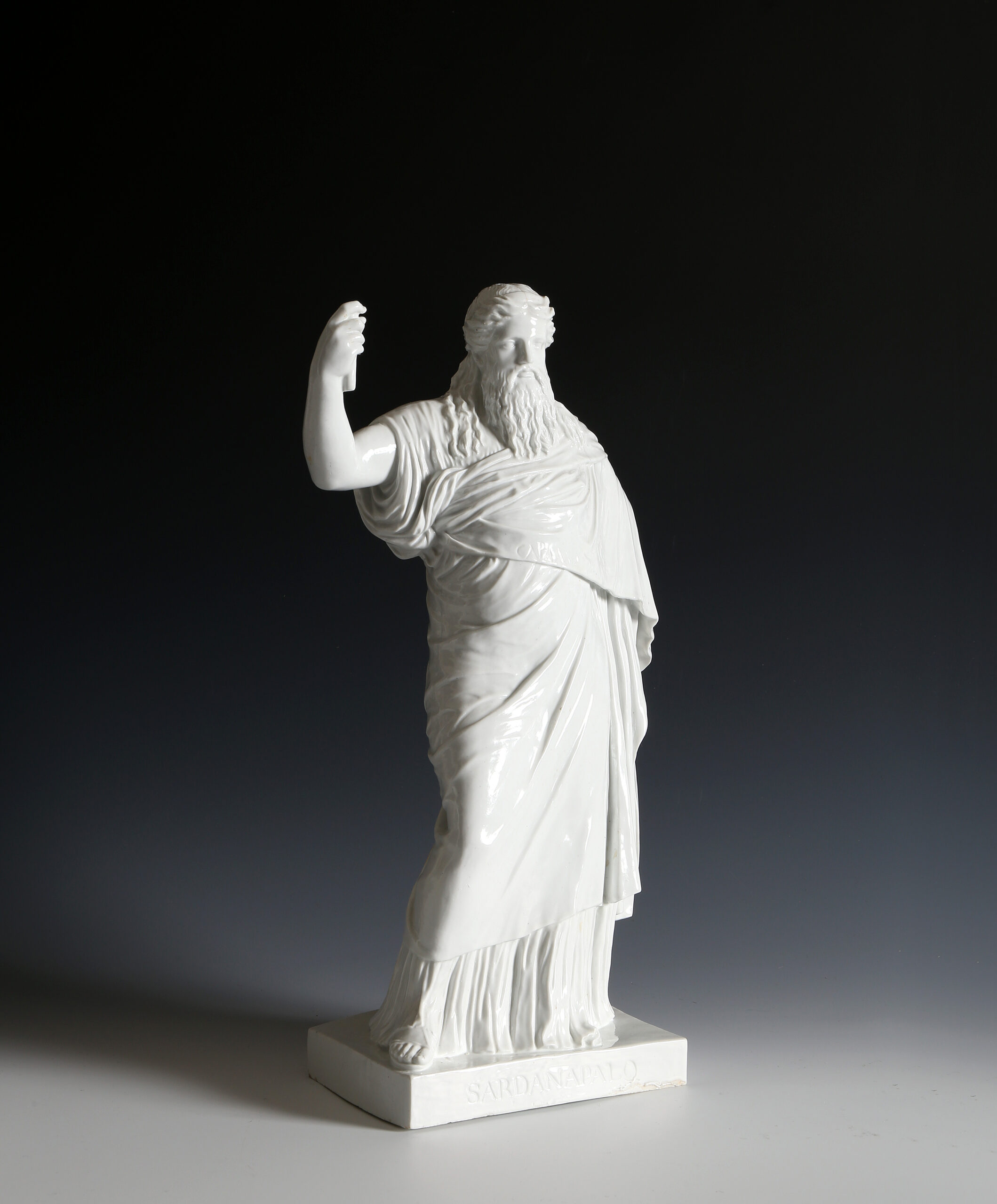 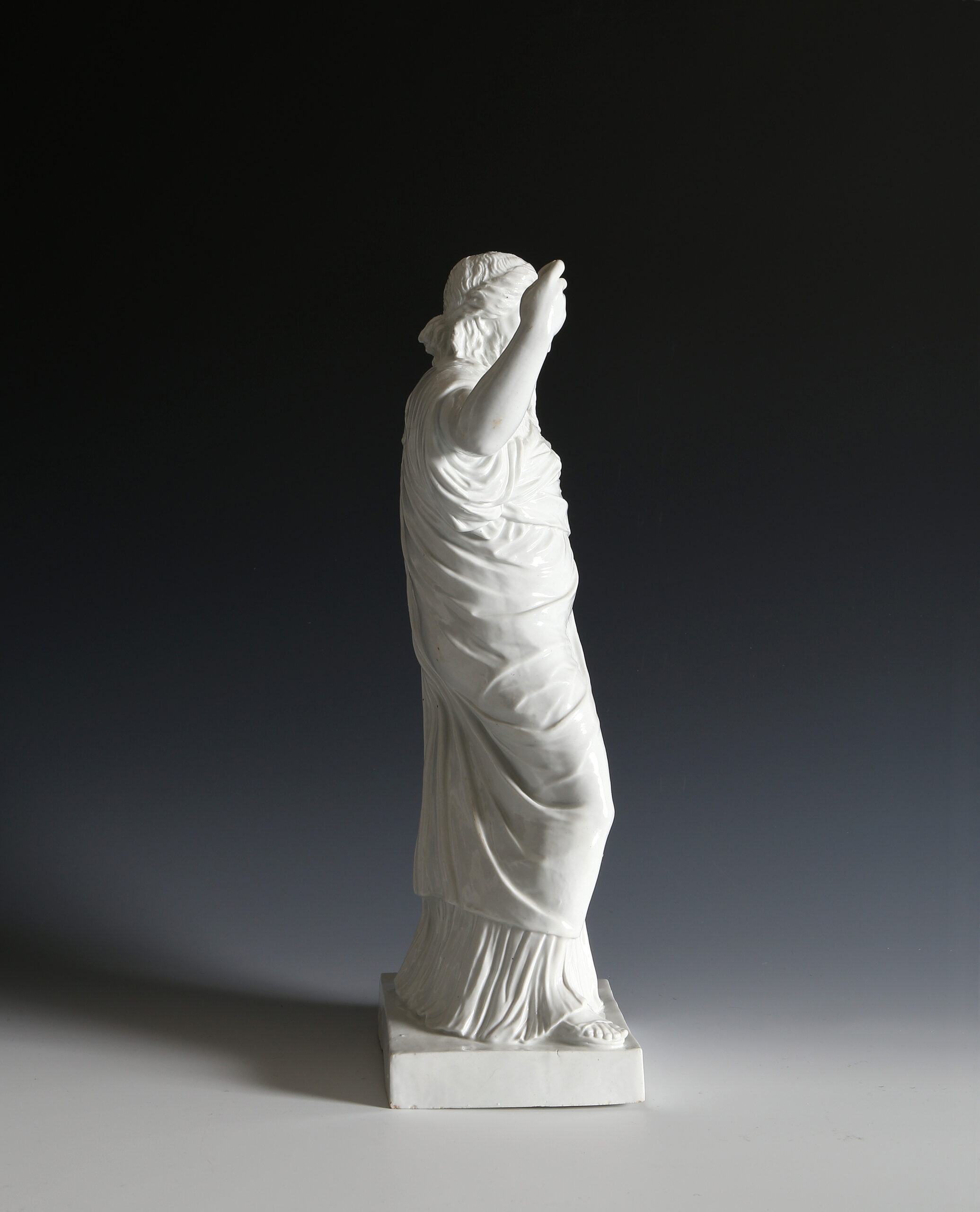 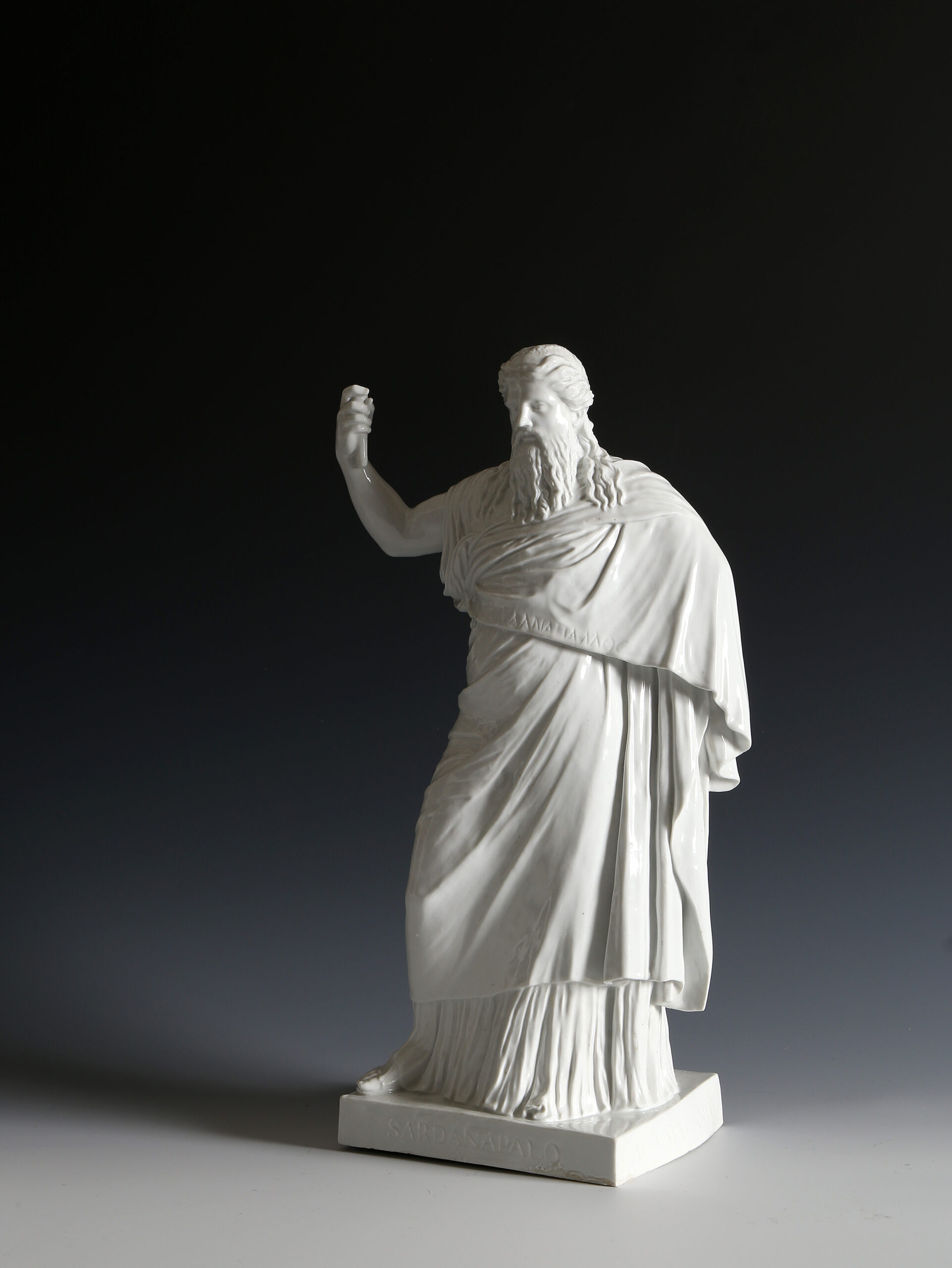 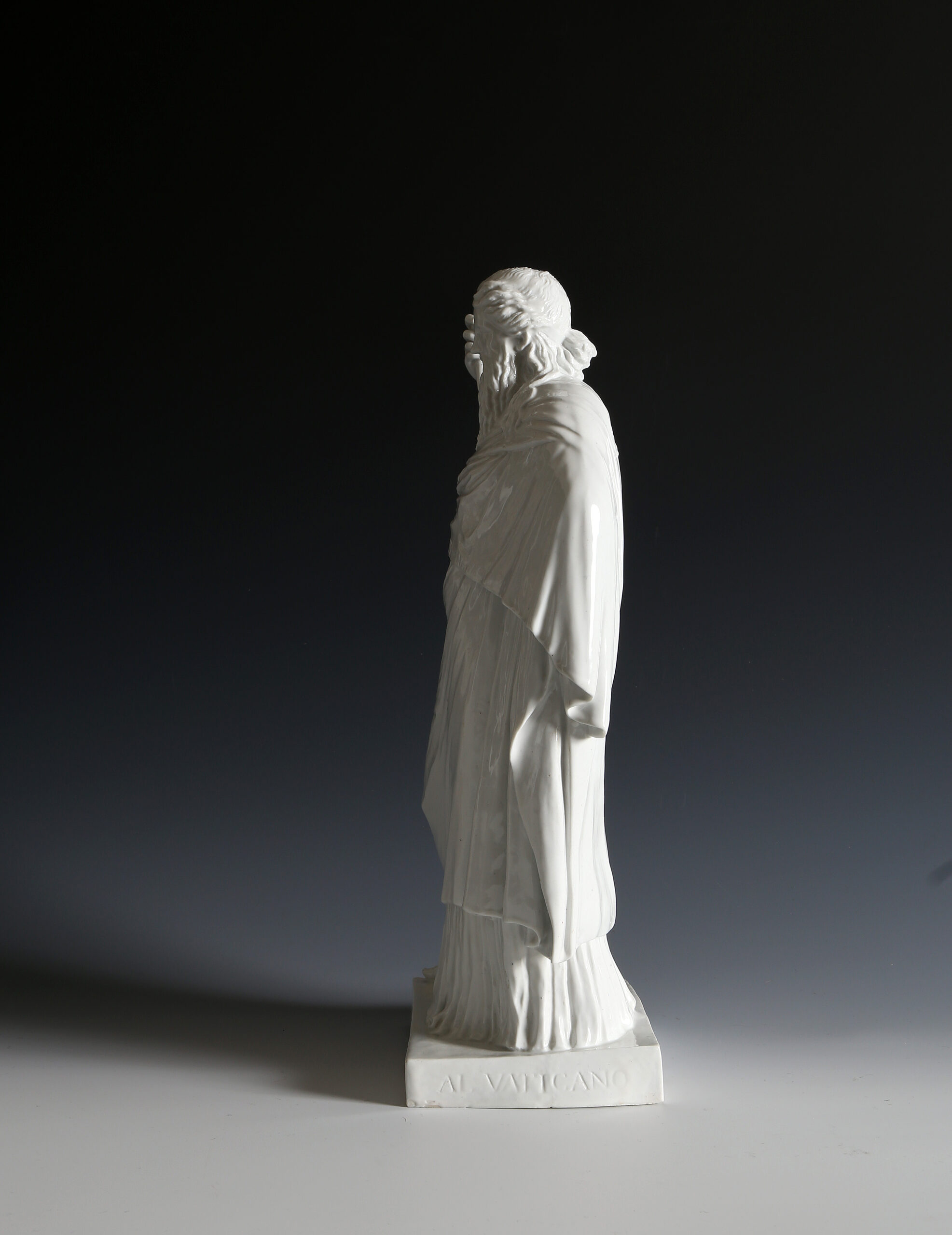 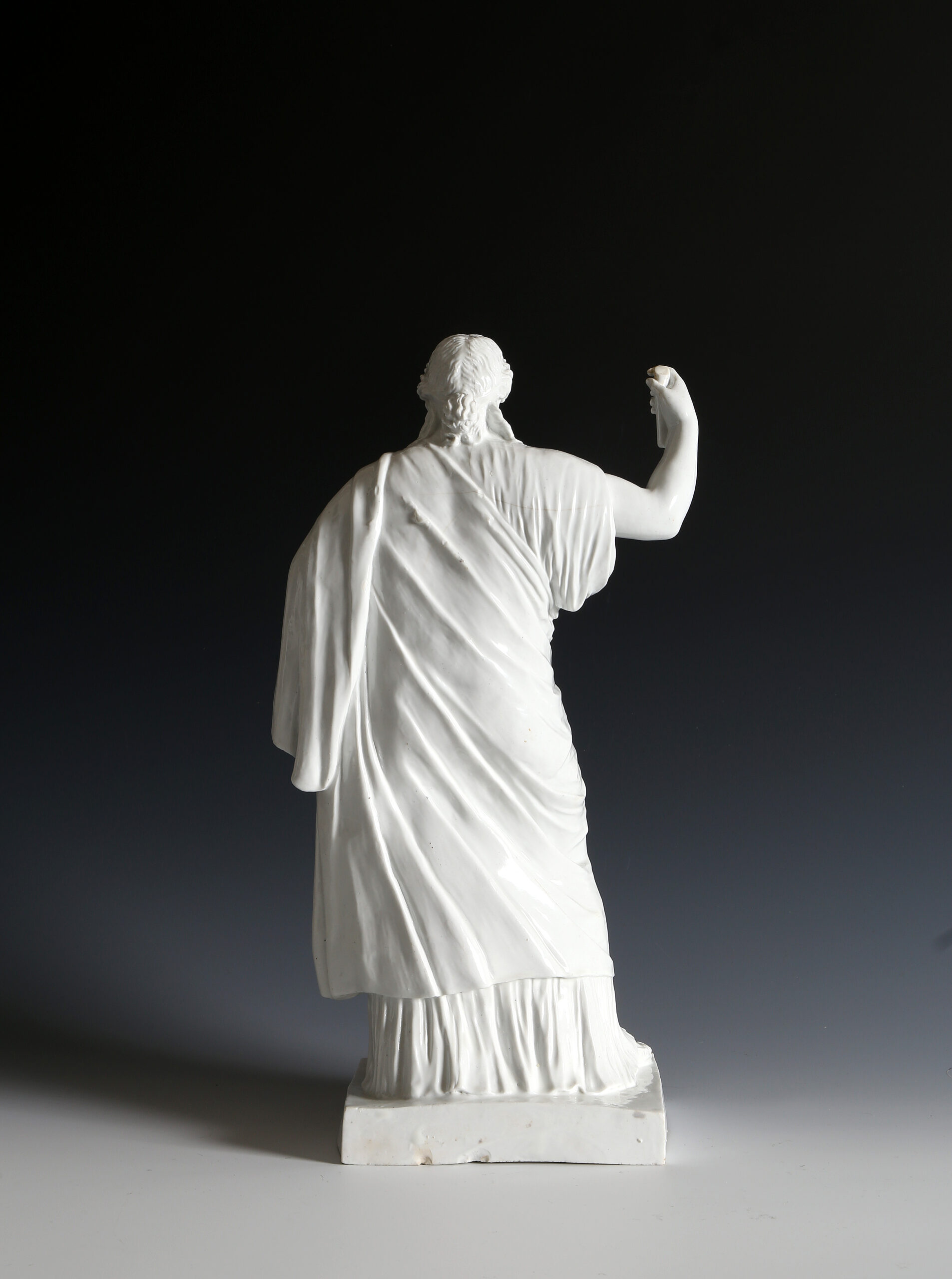 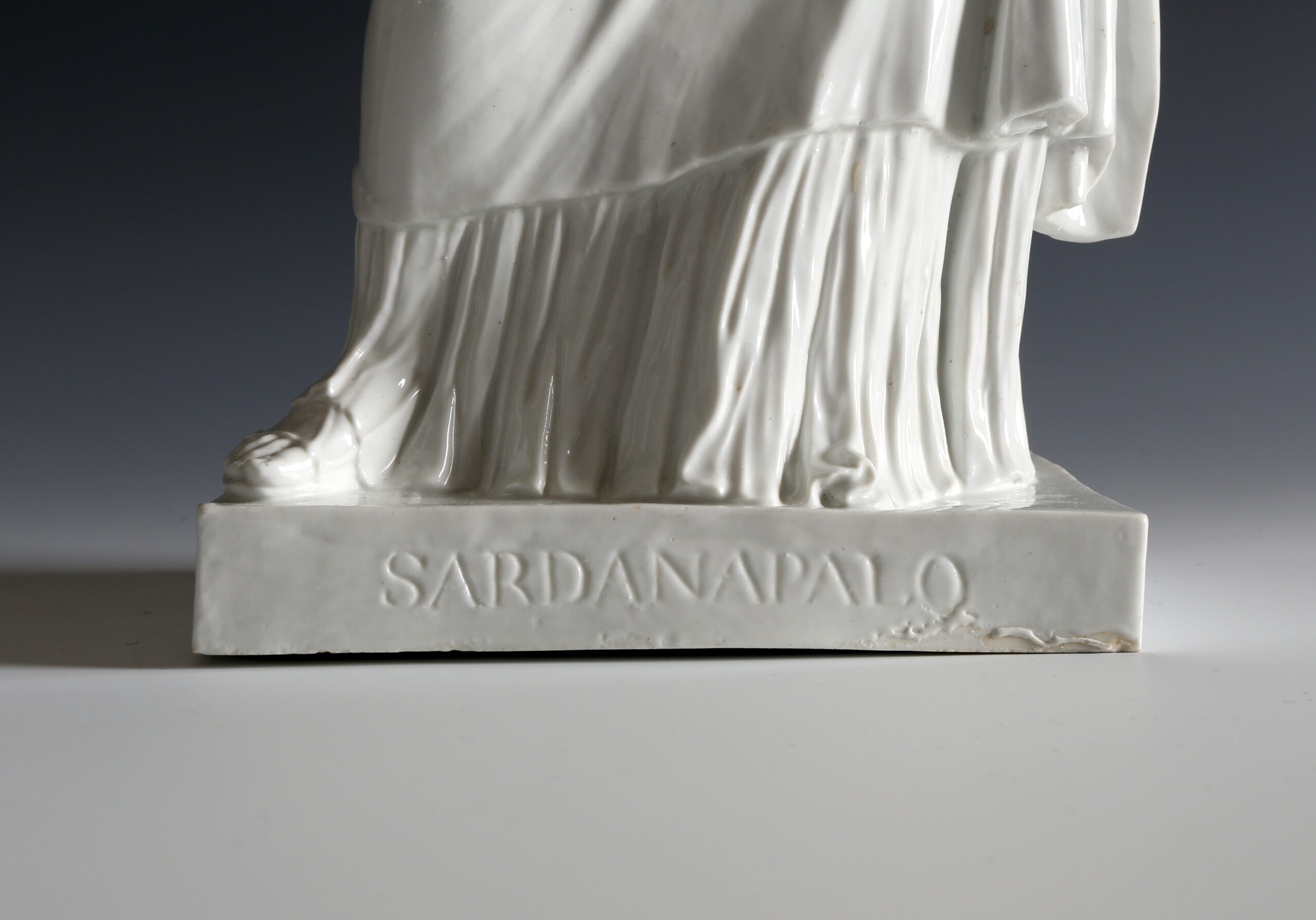 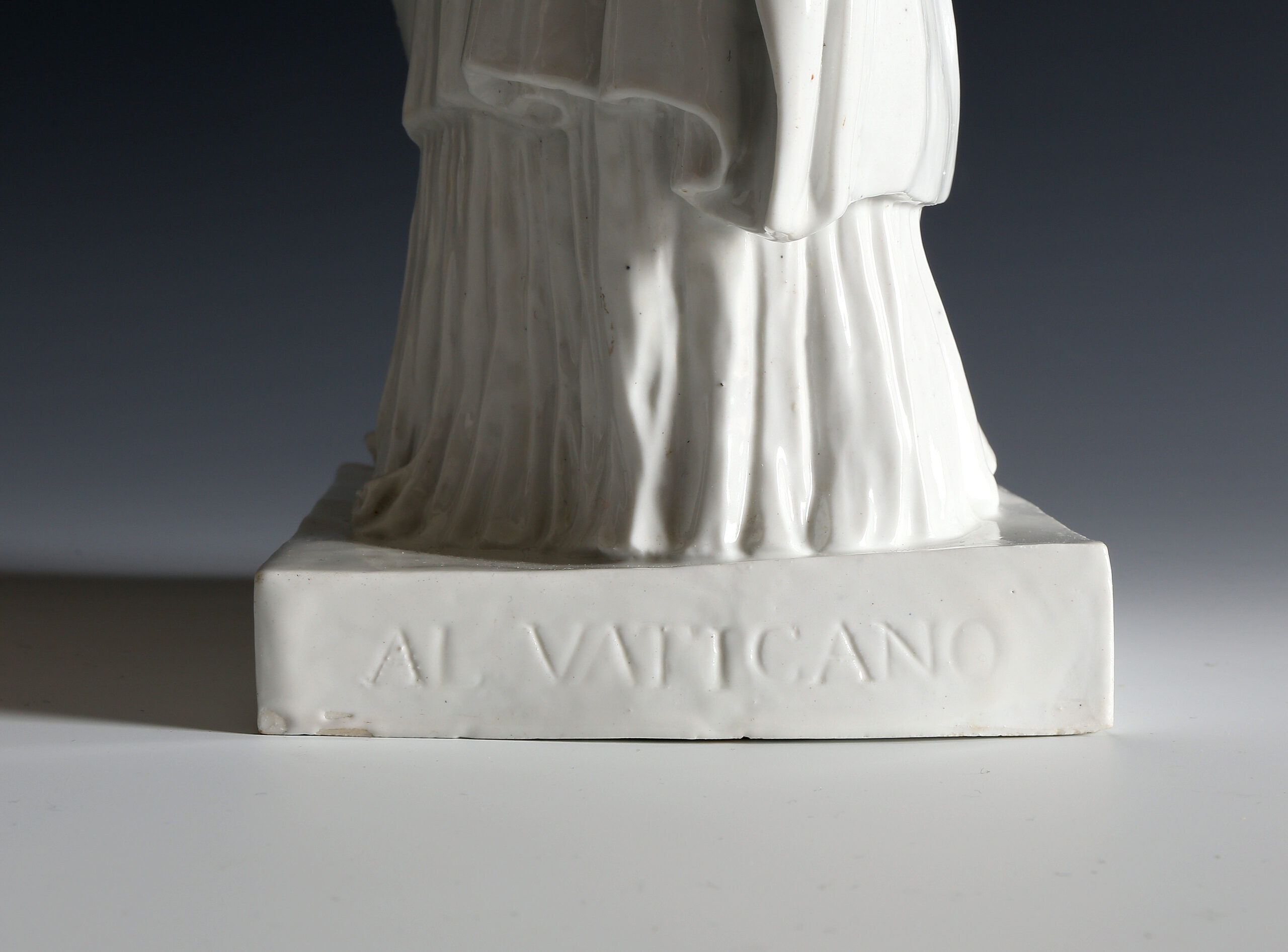 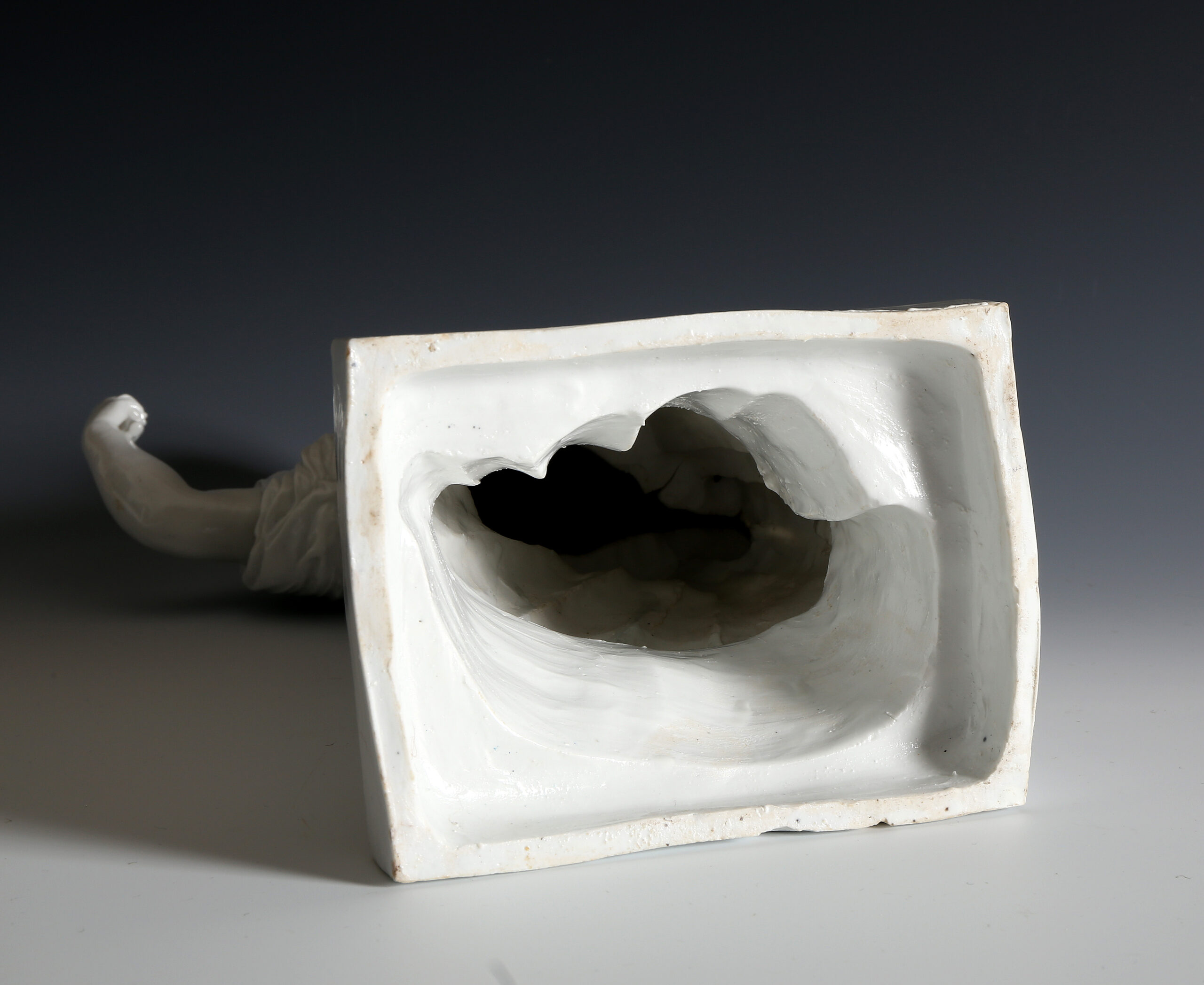 A DOCCIA FIGURE OF DIONYSUS SARDANAPALUS

This is the only example of this model we have been able to find. It is made in hard paste porcelain with the glaze opacified with tin oxide.

This figure of ‘Dionysus Sardanapalus’ is a reduction of the mid – 1st century AD Roman Hellenistic marble in the Pio Clementino Museum in the Vatican which is, in turn, taken from a lost Greek sculpture of around 325 BC. The Pio Clementino example was acquired by the Vatican from the Quarantotti family in 1772. They acquired it from the collection of the well-known sculptor and restorer Bartolomeo Cavaceppi (1716-1799).

The sculpture, formerly thought to be of Sardanapalus the last King of Assyria, in fact represents the god Dionysus as an old man who is more often portrayed as a youth. Because of the earlier misidentification as Sardanapalus, a 17th century restorer carved ‘ϹΑΡΔΑΝΑΠΑΛΛΟϹ’ (Sardanapalus) across a fold of the robe of the Vatican marble, this is faithfully reproduced in this Doccia example. Johann Joachim Winckelmann and other early 19th century scholars argued that the figure was in fact of Dionysus as an old man. 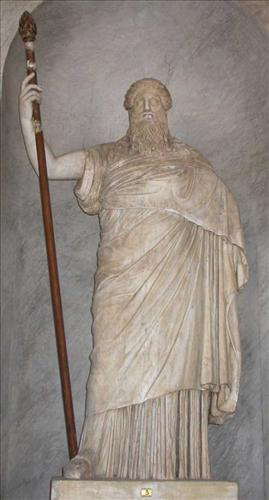 The Vatican model lacked the right arm which was presumably restored by Bartolomeo Cavaceppi.

Our figure is taken from one of a series of twenty-nine plaster models with inscriptions on the base that are preserved at Sesto Fiorentino in the Museo Richard Ginori della Manifattura di Doccia and are discussed by Rita Balleri (Balleri, 2014, pp. 409- 412). The models are all around 50 cm high and with the subjects being identified in large letters around the base. Balleri notes that they are mostly from important collections such as those of the Vatican, the Capitoline, the Medici and Borghese. She indicates that these models must have come from a workshop with a deep knowledge of ancient statuary and establishes that they are from the workshop of Bartolomeo Cavaceppi, the sculptor and restorer who once owned the original of our figure. They are all in the antiquarian Grand Tour taste.

Bartolomeo Cavaceppi was one of the most important artistic personalities of 18th century Rome. He was chief restorer to the Pope and Cardinal Alessandro Albani. He was a supplier to all the visiting English virtuosi and a close friend of Johann Joachim Winckelmann.

The plaster model from which our figure was made has the historic inventory no. ‘1199 nero’. The plaster is 50.5 cm high and our figure is 16% smaller which is accounted for by the normal shrinkage in firing.

Surviving porcelain versions of this series are rare. The British Museum has figures inscribed ‘VENERE IN ROMA’ and ‘ZENO’ which were bequeathed by Sir Augustus Wollaston Franks in 1897 (Franks 476 & 468,Dawson, 2009, p.18, Figs 6 & 7). Four other models are at Sesto Fiorentino in the Museo Richard Ginori. 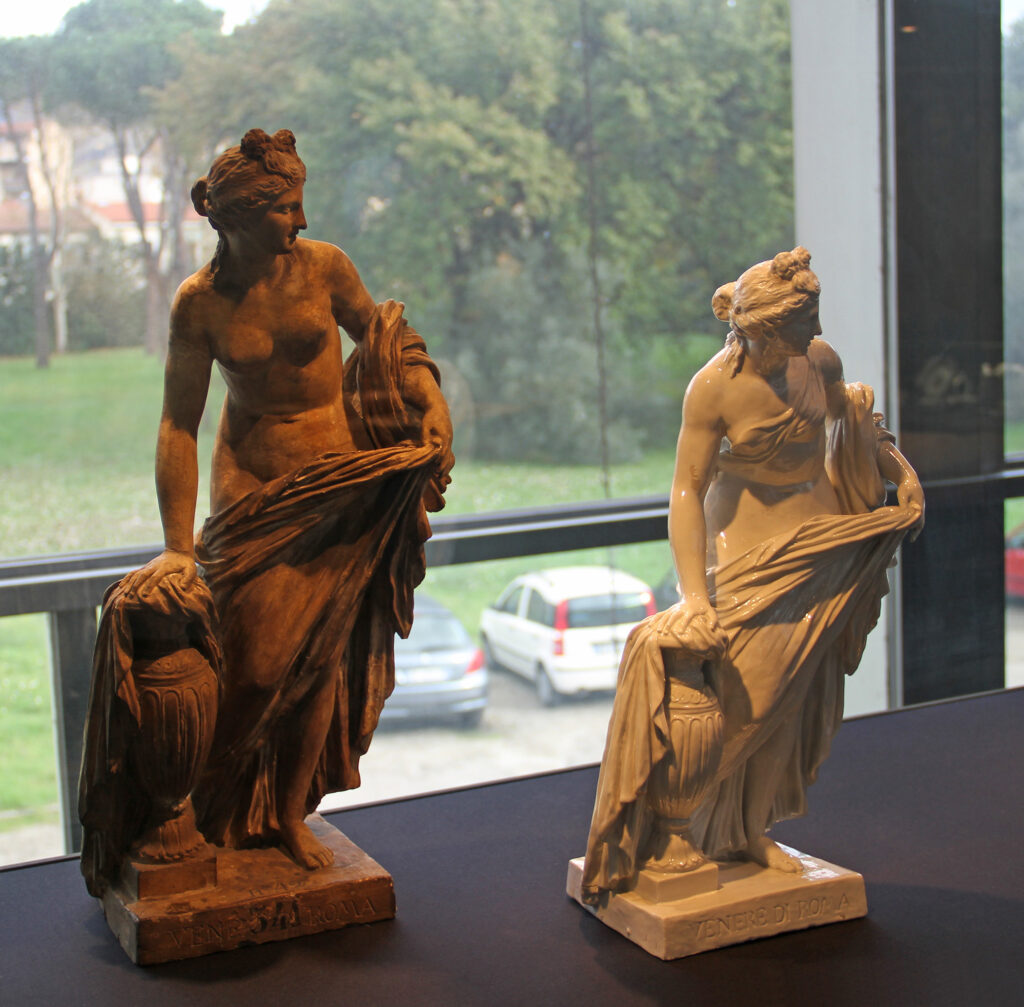 Condition:
A small section of the top of the staff lacking, firing cracks across crown of head and back, no restoration