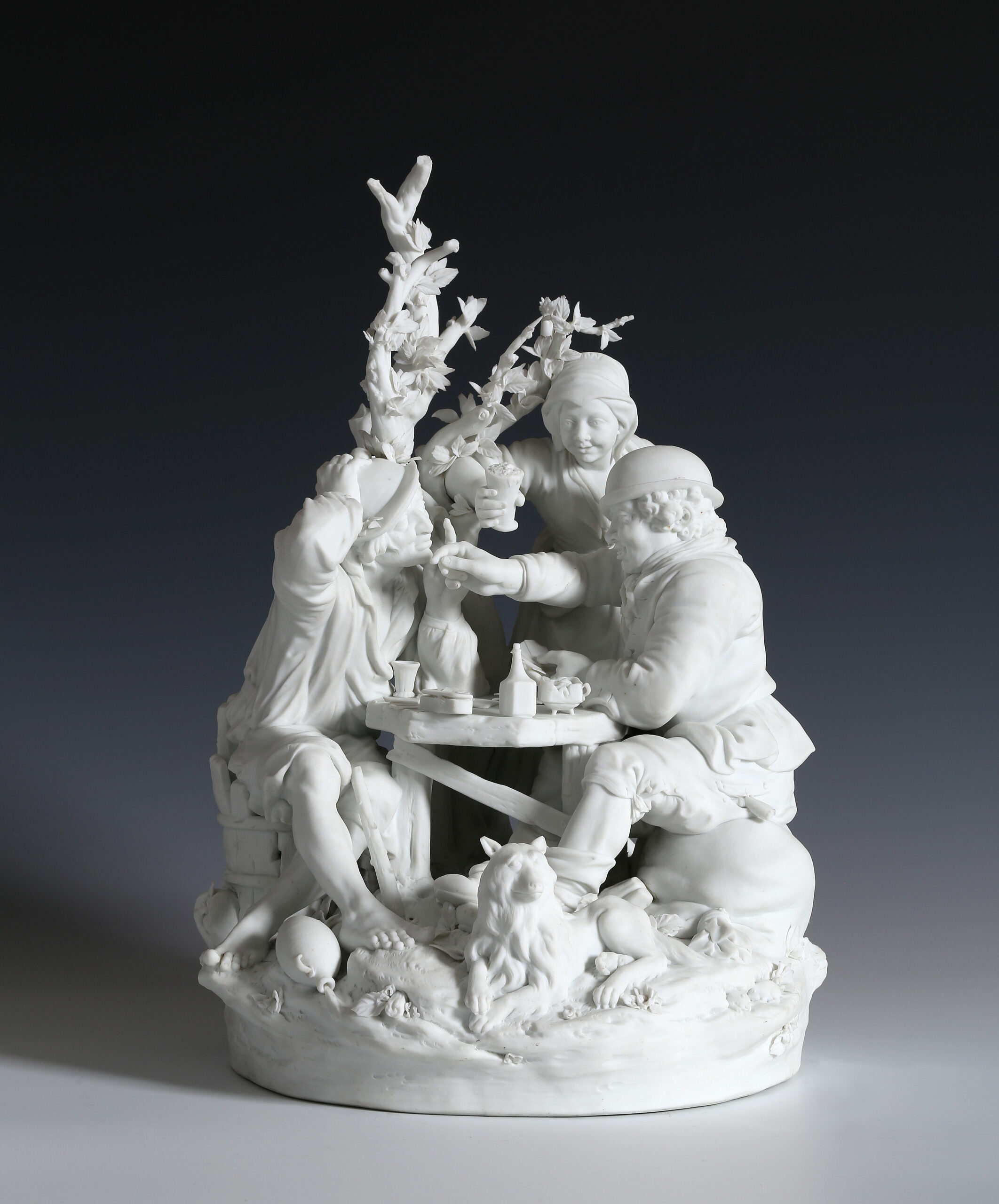 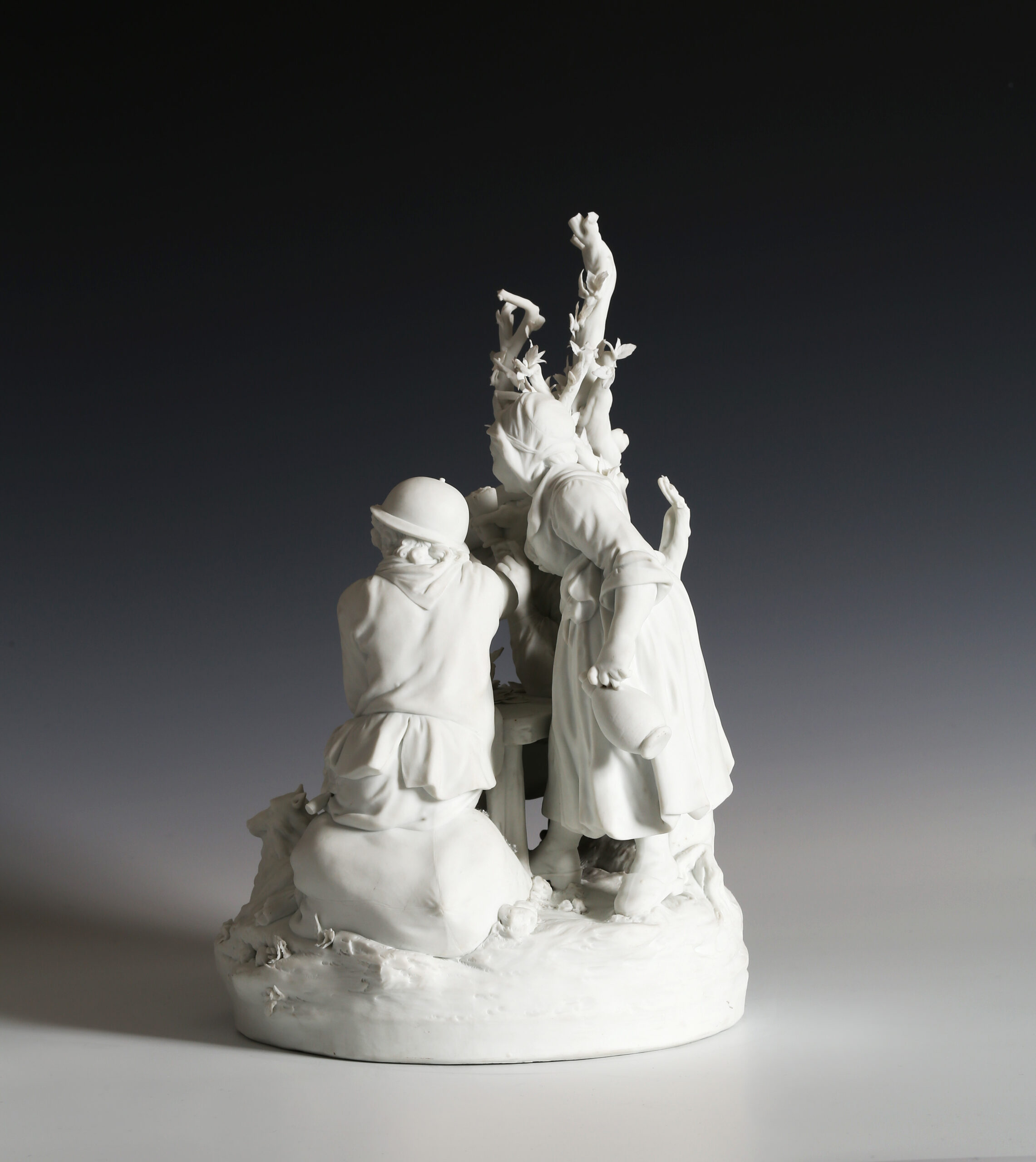 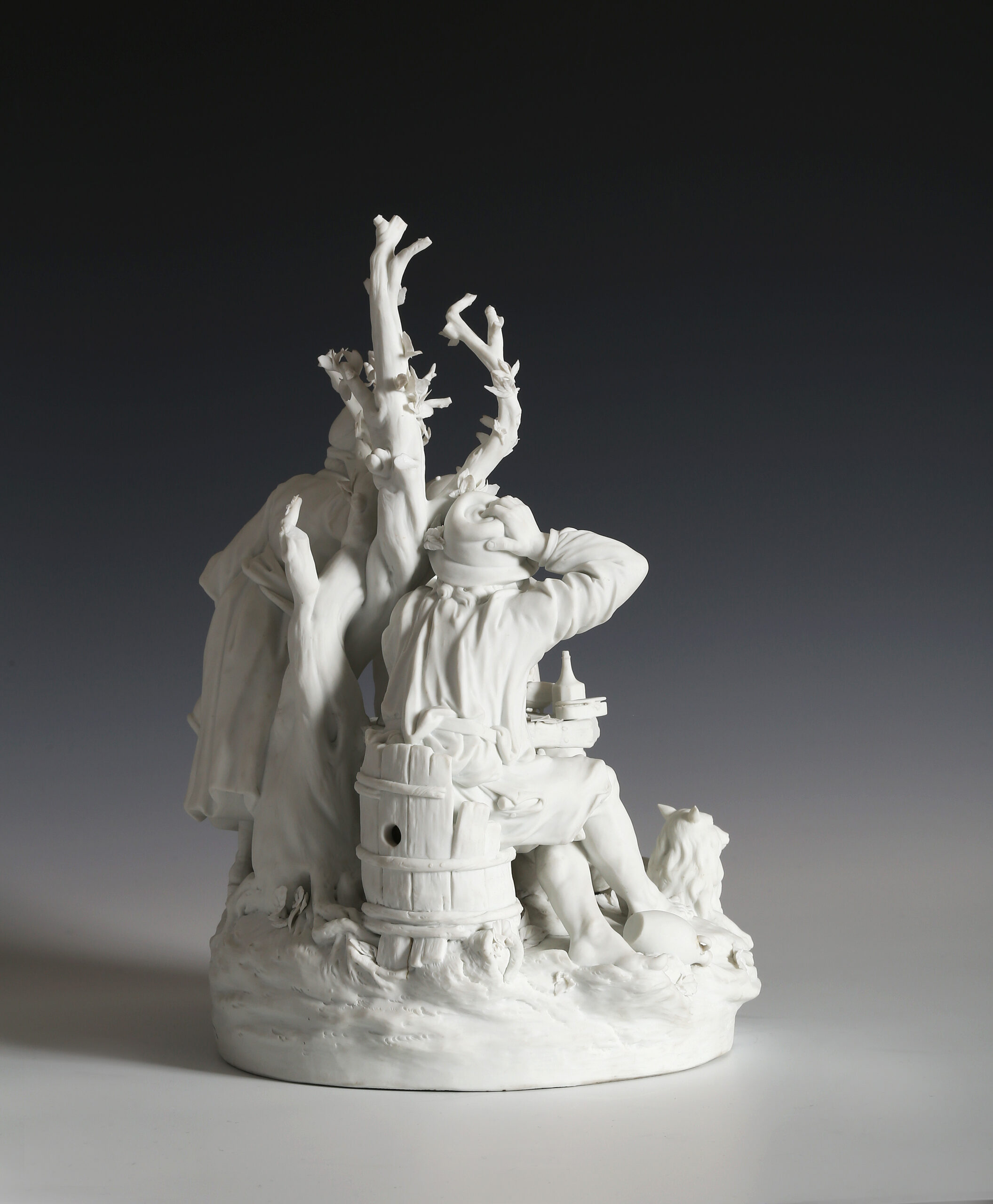 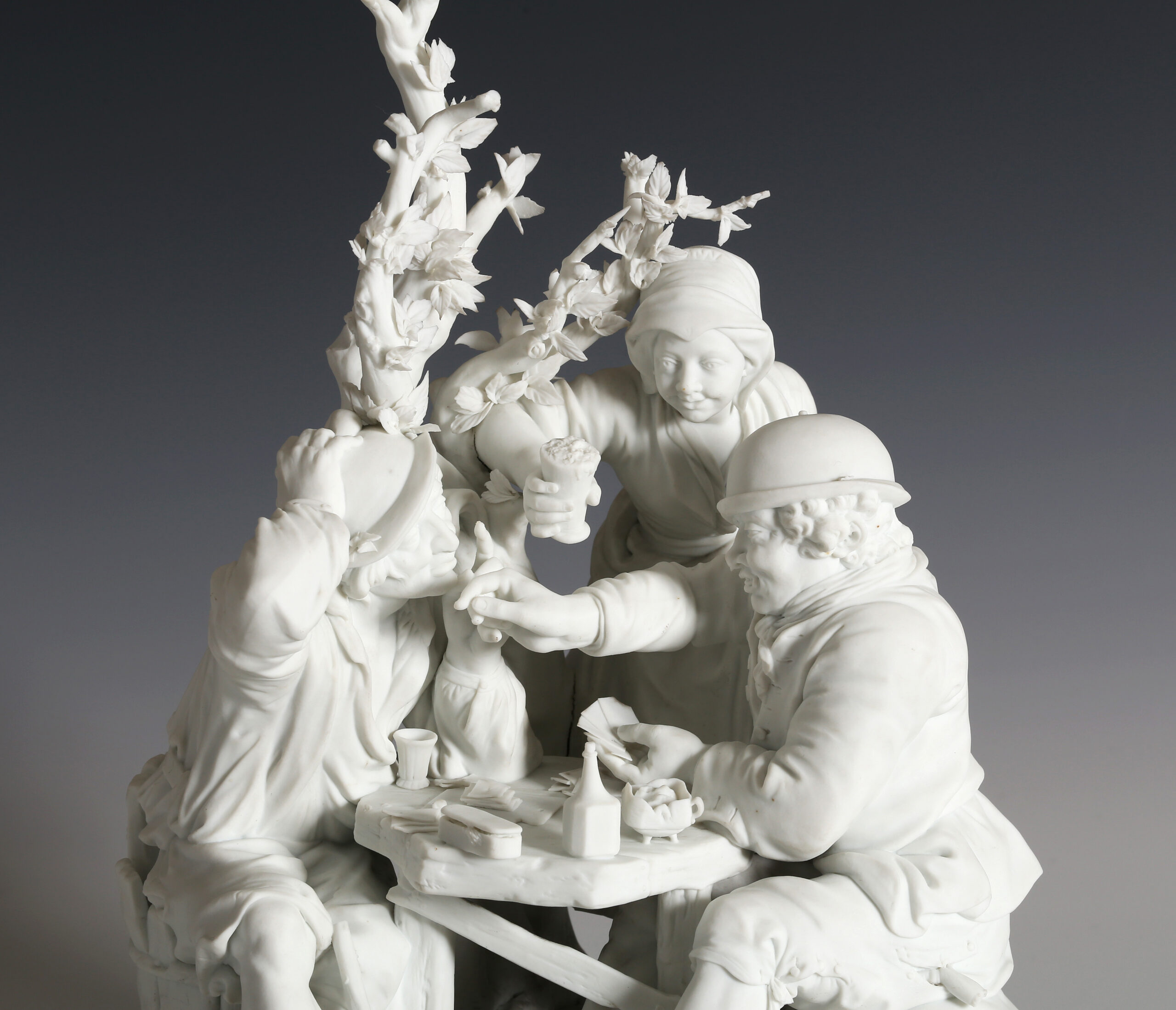 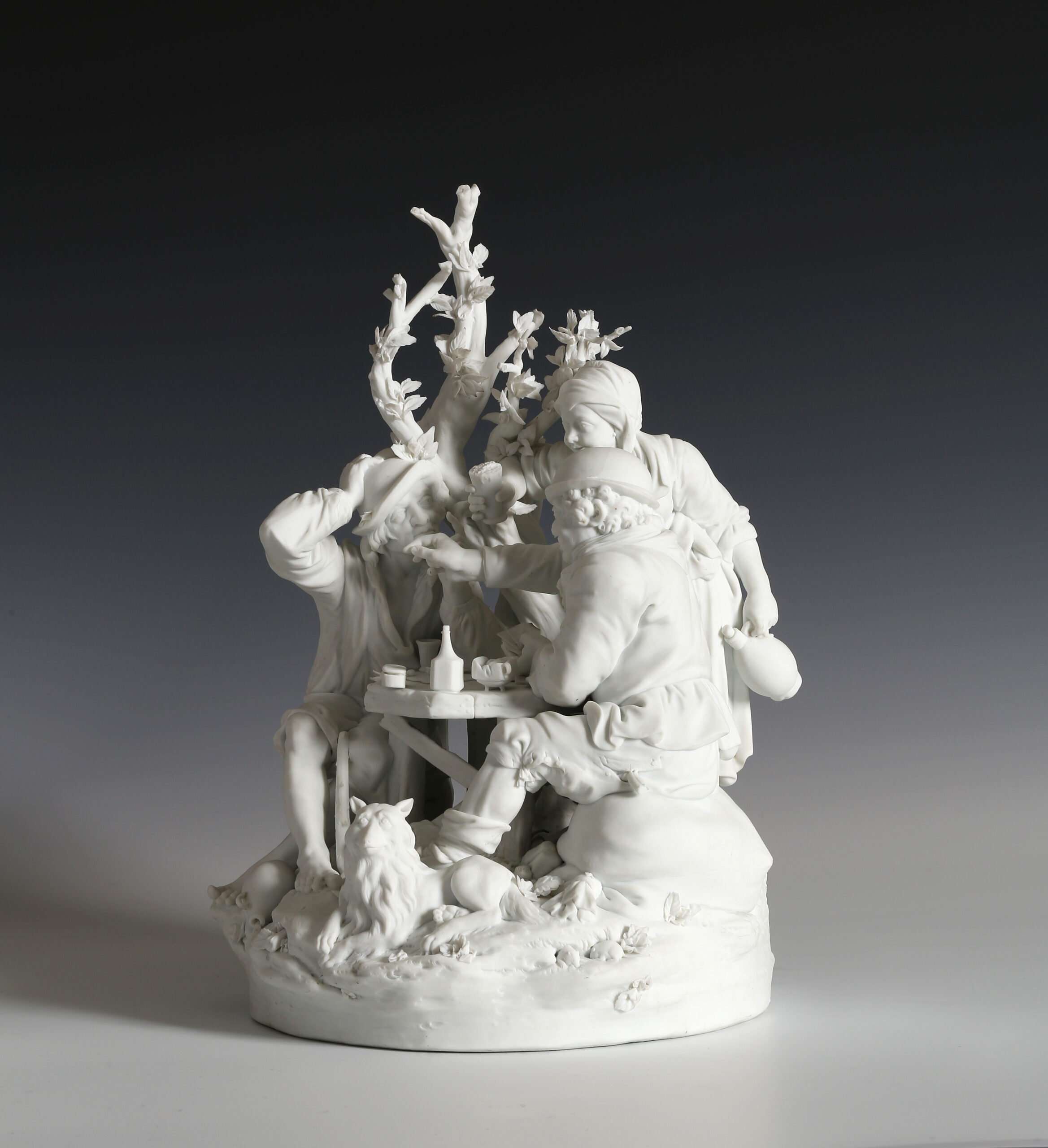 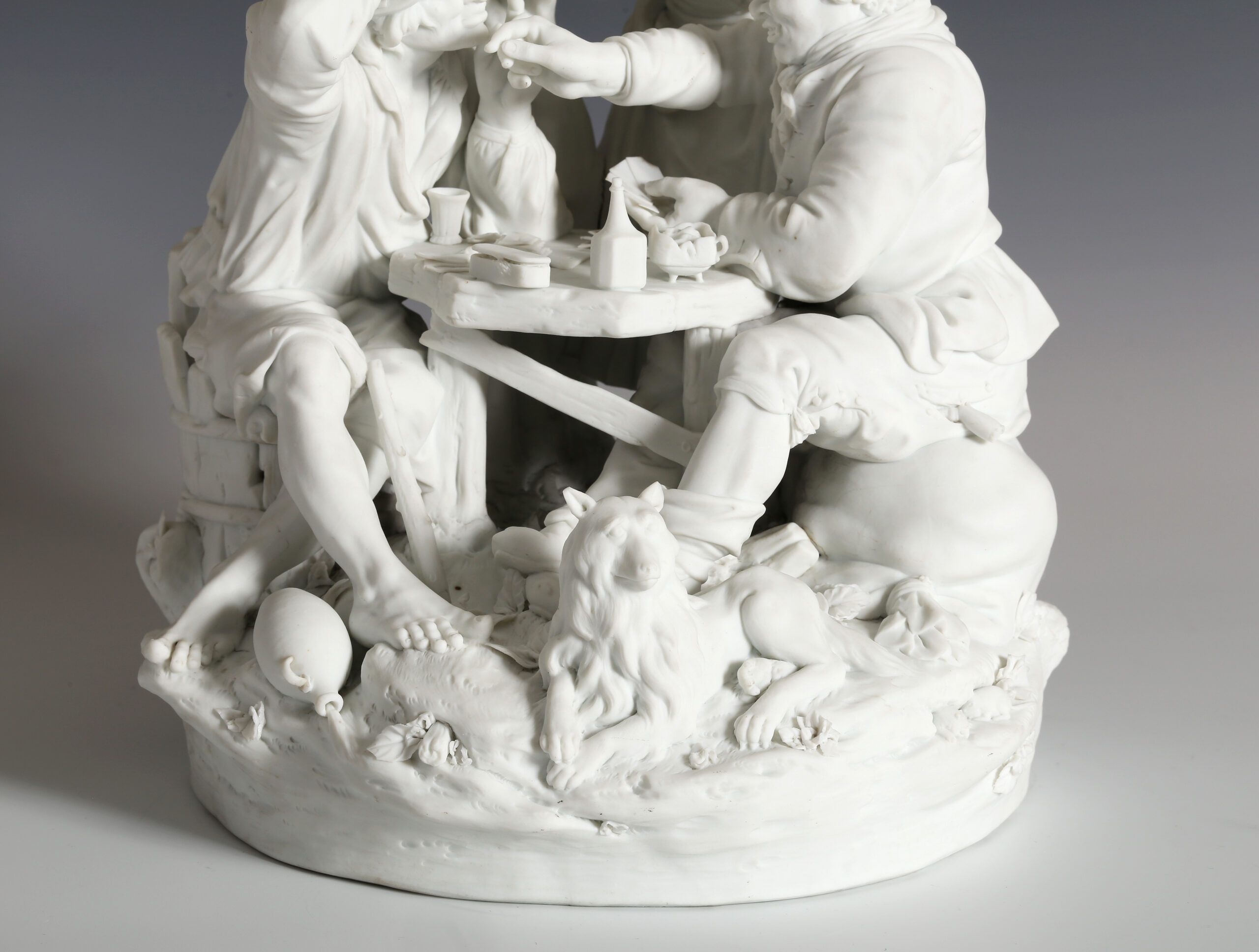 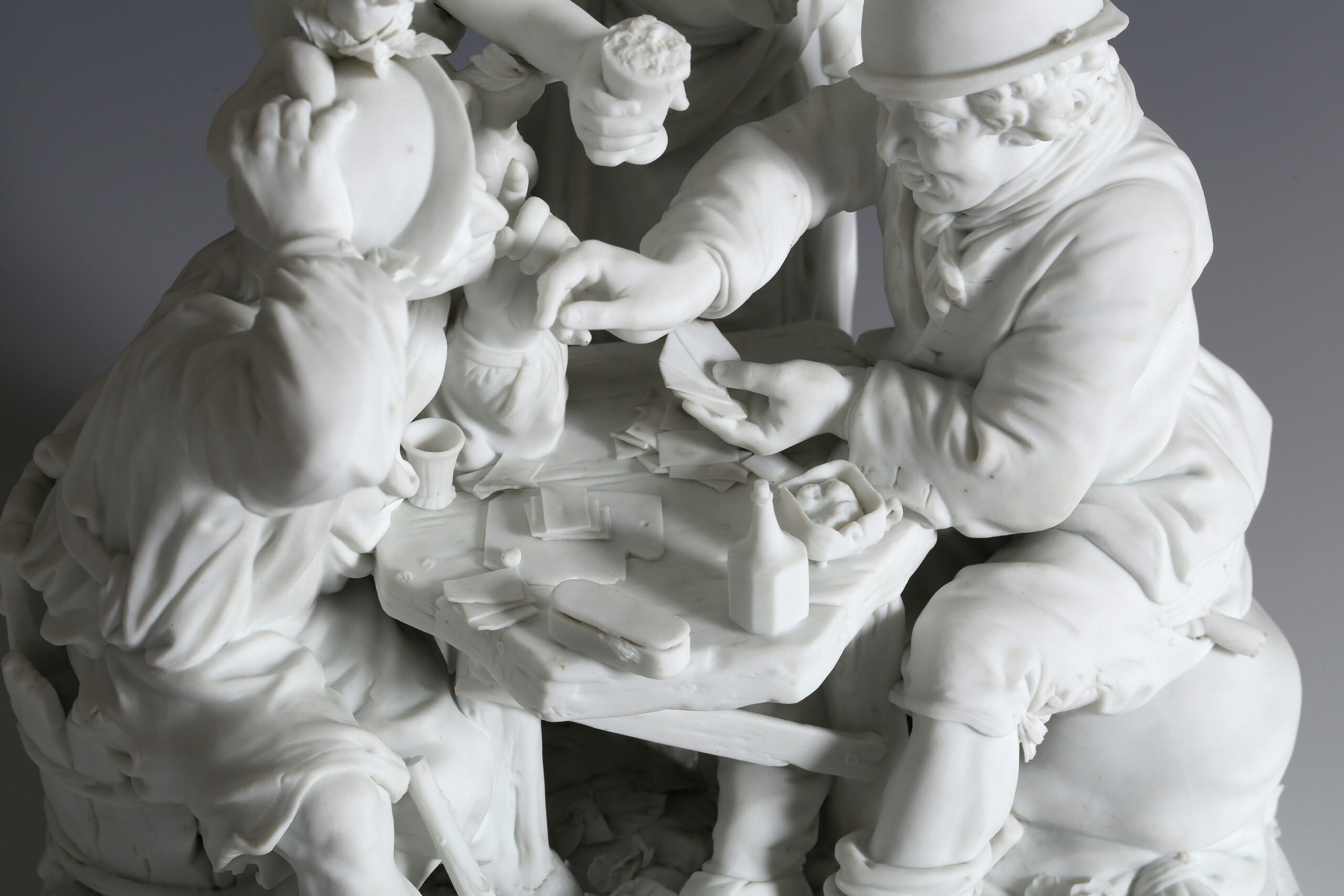 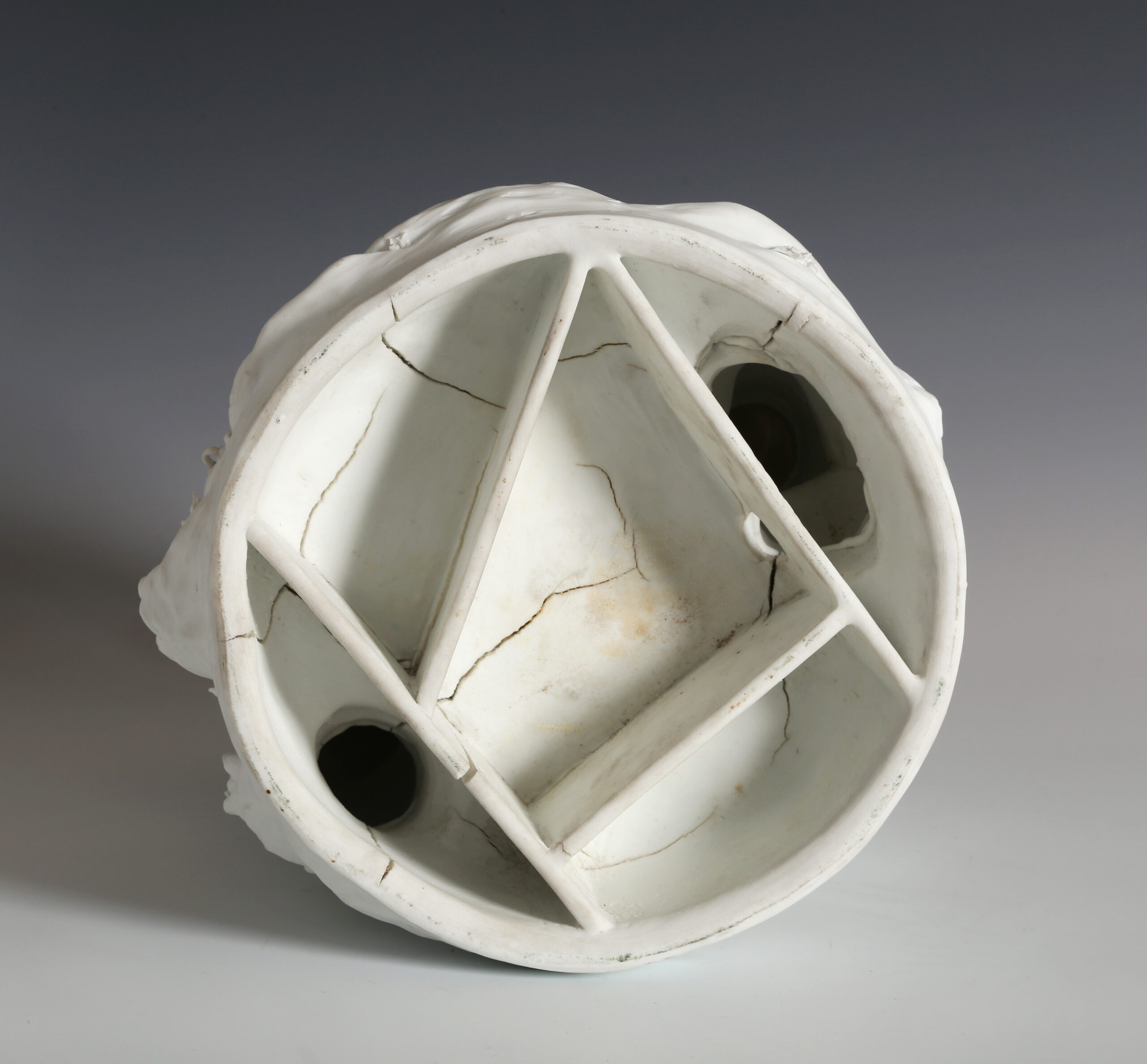 To date only four different large-scale models of these remarkably elaborate groups are have been identified. Some of are known in two versions, making seven examples recorded in all so far. They are characterised but an extraordinary attention to detail and excellence of finish that is matched by no other producer of biscuit porcelain of the eighteenth century.

Our group depicts a cardsharp, seated at a table, outwitting a simple peasant whilst his accomplice, a barmaid, plies him with a frothing glass of beer. On the table we see the cards, a tobacco box, lit coals and a flask of spirits.

The only other known example of this group is one that was acquired, from us, by the Rijksmuseum, Amsterdam, in 2005 and was published in the Rijksmuseum Bulletin (Bulletin van Het Rijksmuseum , Jaargang 54, 2006, no. 9 pp. 82-83). The main difference between the two groups is that our example here has a dog, a Keeshond, in the foreground rather than a kettle and a jug between the peasant’s feet and different accoutrements on the table. 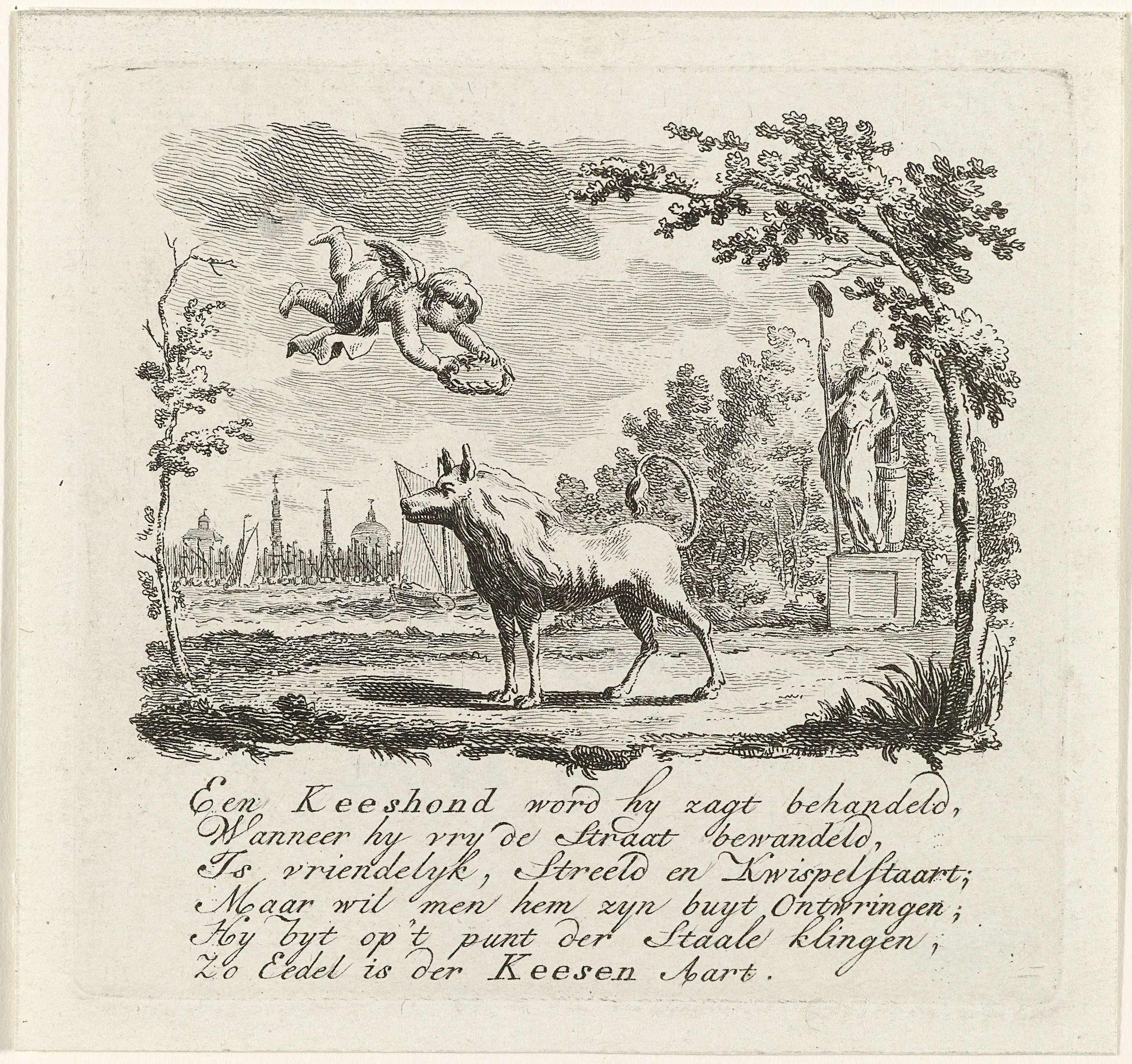 A Keeshond, or Dutch Barge Dog, was the symbol of the Patriot faction in the Netherlands during the unrest in the years before the French Revolution. The Patriottentijd opposed the Orangisten and the Stadholder, William V, Prince of Orange.

The seven recorded examples of these large groups are clearly by the same very skilled modeller. The features are bold, almost exaggerated, and all include dogs or, in the case of the Hollandse Maagd a lion, another symbol of the Patriottentijd. 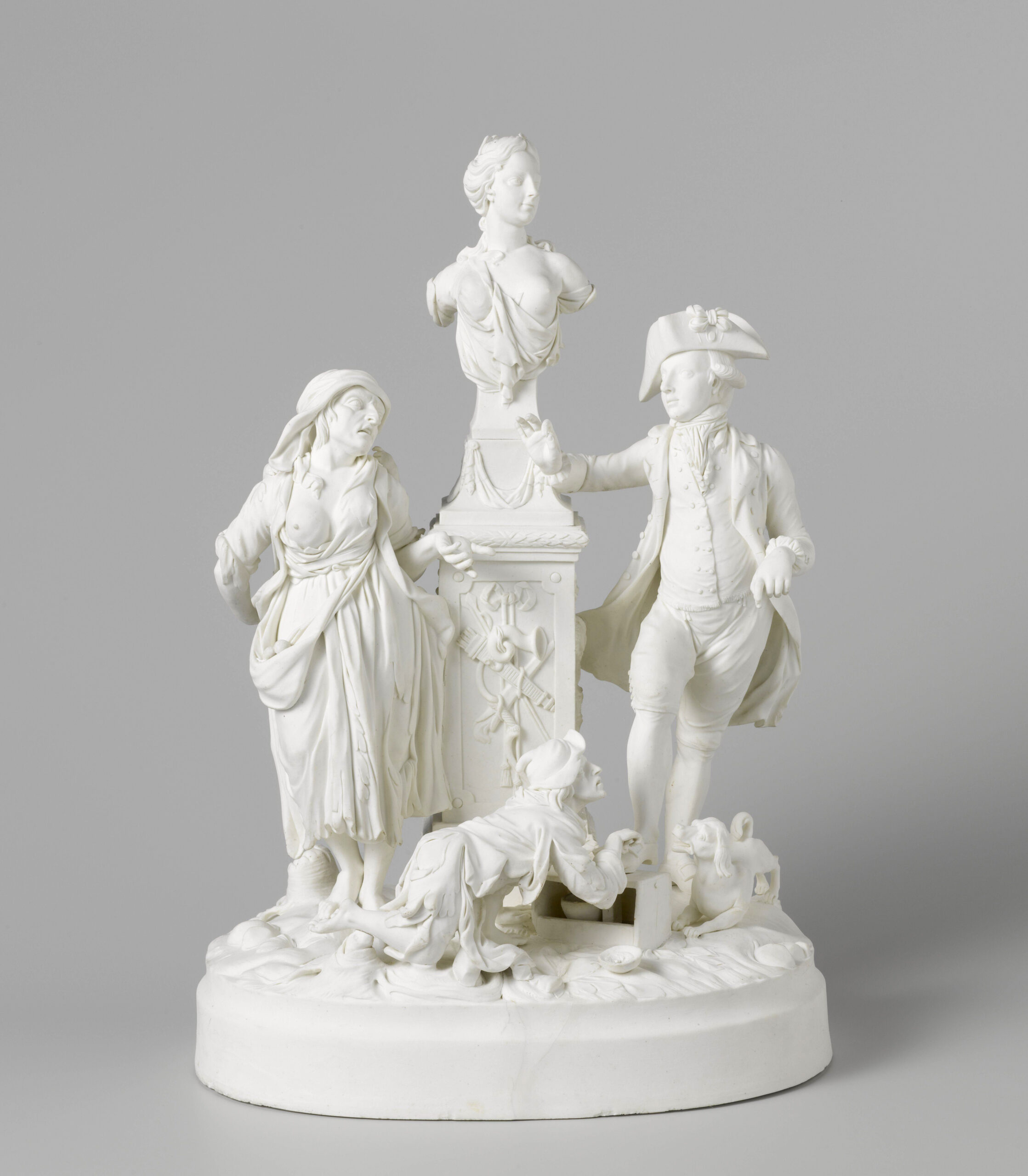 The only one of the large groups that is marked is the Allegorical group of a beggar woman and gentleman, perhaps a naval officer, having his shoes polished beside a bust of Diana on a pedestal in the Rijksmuseum. It is incised ‘MOL’ for Manufactuur Oud-Loosdrecht . 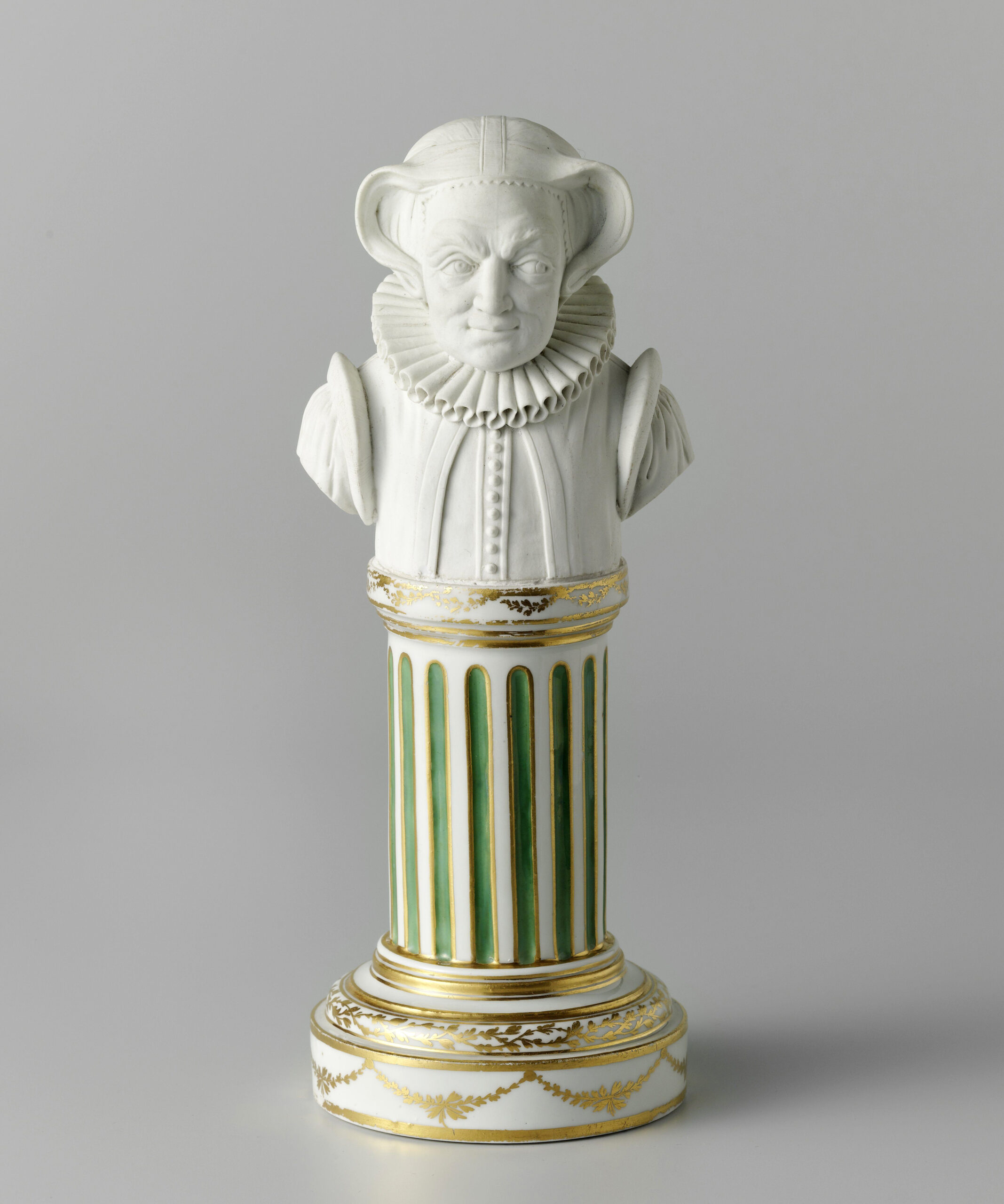 Numerous smaller busts of historic patriotic heroes exist with the same distinctive strong modelling and boldly defined features which appear on pedestals which are also marked MOL, for example Maria van Utrecht. Further marked groups and figures include two fighting dogs in the museum at Sèvres – Cité de la Céramique and the only glazed and enamelled Loosdrecht figure, a boy representing Autumn with a painted mark, now in a private collection. A number of fragments of figures were found in the excavations of the factory site and published in De Loosdrechtse Porseleinfabriek, boven water, Historische Kring Loosdrecht, 2007.

The identity of the highly accomplished sculptor of these figures and groups has not been definitively established, but we do know that Joannes de Mol employed a skilled worker, Johan Christoph Jurgens who had spent his apprenticeship at the porcelain factory of Fürstenberg, where, as late as 1772, he was referred to as a Figurenformer. In 1778 Johan Christoph married Wilhelmina Davidson from Doesburg in Loosdrecht. He was presumably the mould maker and modeller rather than the actual sculptor (Bulletin van Het Rijksmuseum, Jaargang 54, 2006, no. 9 pp. 82-83). Joseph Estié, of Salomon Stodel Antiques, makes the interesting suggestion that the production of biscuit sculpture at Loosdrecht coindcides with the time that the great French sculptor and head of the modelling studio at Sèvres, Etienne Maurice Falconet (1716-1791), took refuge in The Hague when he was forced to leave Russia. Falconet gave lessons in sculpture at the Hague and was accompanied by his daughter-in-law Marie-Anne Collot who hoped to build a career as a portrait sculptor in the Netherlands, perhaps she was the author of these remarkable works (Estié, ‘Hollands Porselein, Collectie Willems’, 2009, pp. 84 & 85).

Four different models of the larger groups are known to us. Two examples of three of these models making seven examples in all.

Another almost identical now in a private collection, sold by E & H Manners in 2002.

Both of these were exhibited in the Princessehof Leeuwarden in 2007 and published in Pretty Dutch, 19th Century Dutch Porcelain, p. 138 figs.,  1 & 2.

The other example currently with E &H Manners 2021

The fiddler with his dog at his side and a serving girl seated around a barrel. The girl handing a mug to a boy leaning over an arch.  Unmarked.

One in the Museum Grand Curtius, Liege, Belgium.

Figures and groups on a smaller scale include:

A waster of a group of two putti around a dolphin on a socle of waves is published: De Loosdrechtse Porseleinfabriek, boven water (Historische Kring Loosdrecht, 2007. p. 116, figs. 235 &236).

The only known glazed and coloured example of a figure is of a boy squeezing grapes into a glass, marked M.O.L with a star in underglaze blue (Private Collection, from L’Argenterie Antique).

There is also an unmarked biscuit version of this figure (Private Collection).

Beyond this there are numerous busts on columns of Dutch historical figures, these all have the same distinctive exaggerated features of the faces in the bigger groups. Seventeen different models were exhibited in the Princessehof, Leeuwarden in 2007 and published in Pretty Dutch, 19th Century Dutch Porcelain, pp.136 -137.

De Loosdrechtse Porseleinfabriek boven water, Historische Kring Loosdrecht, 2007. The report on the excavations of the foundations of the eighteenth century factory of Johannes de Mol