A DUTCH TIN-GLAZED ‘MAJOLICA’ DISH WITH A MILKMAID 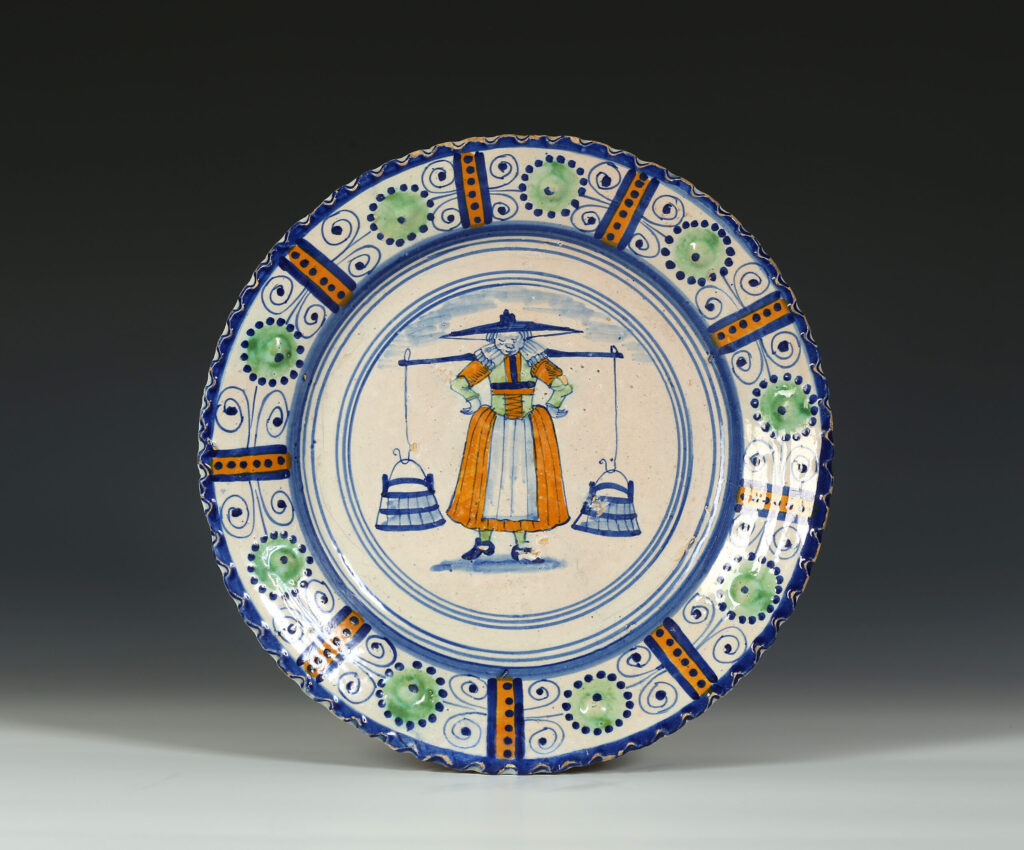 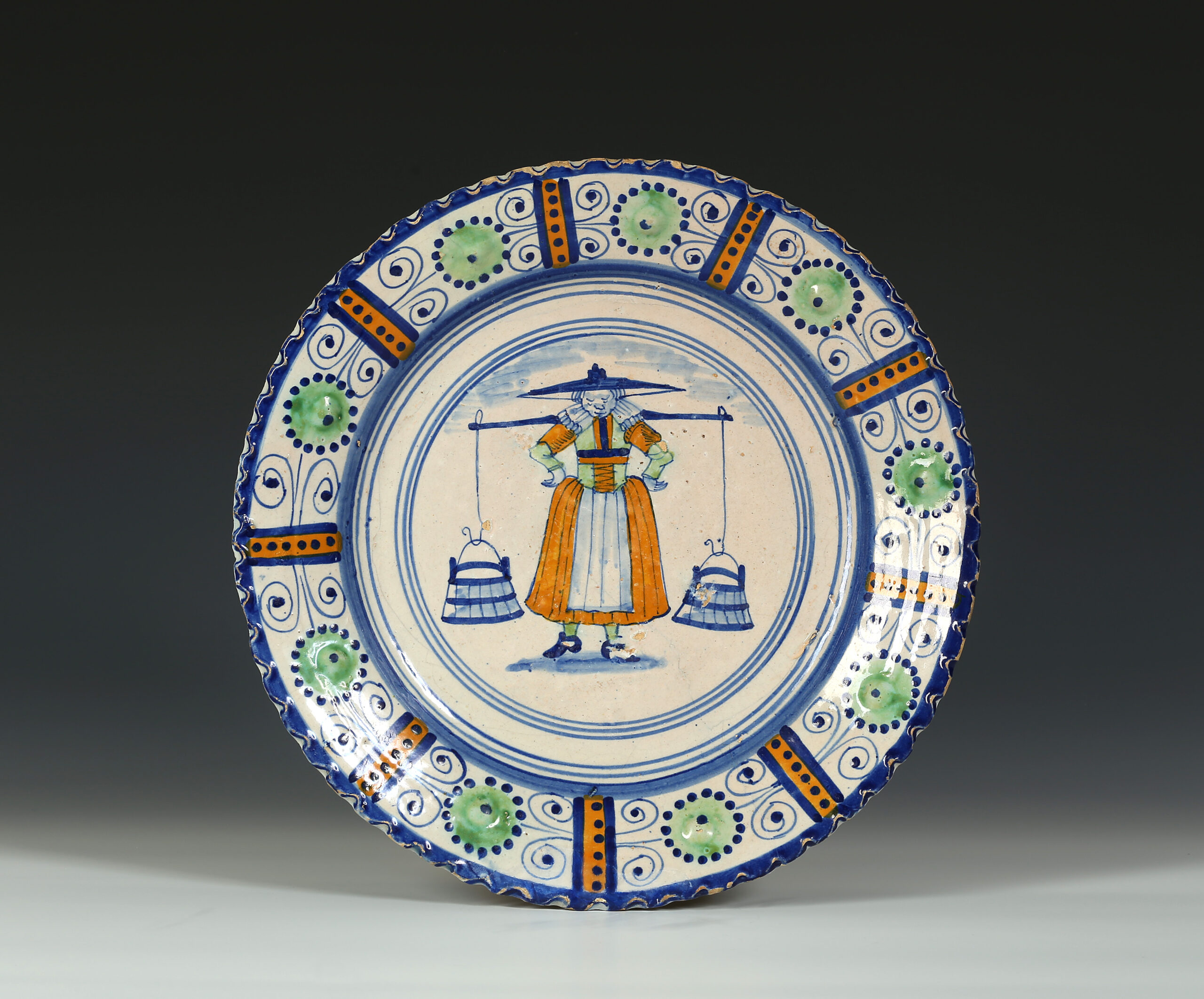 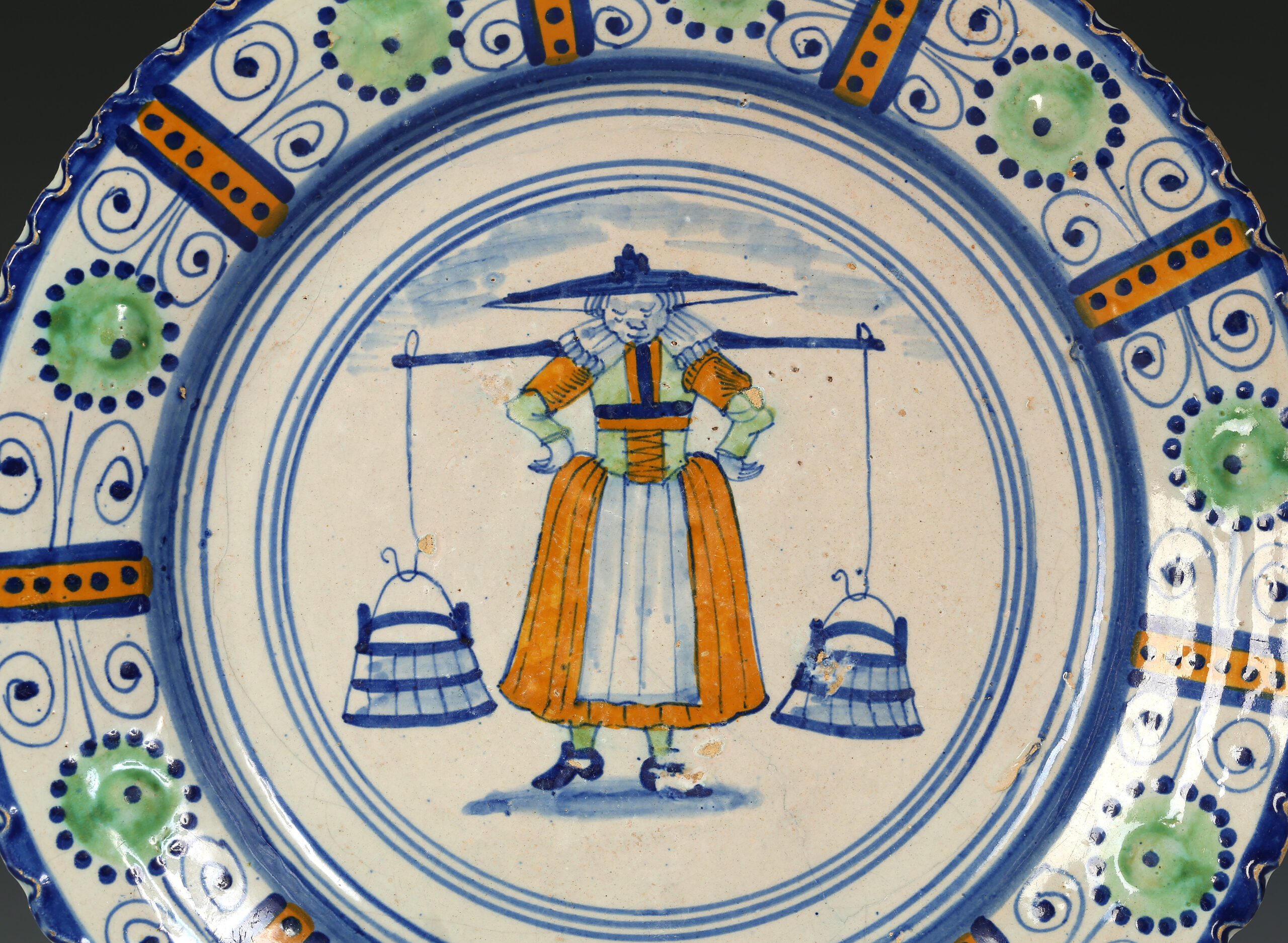 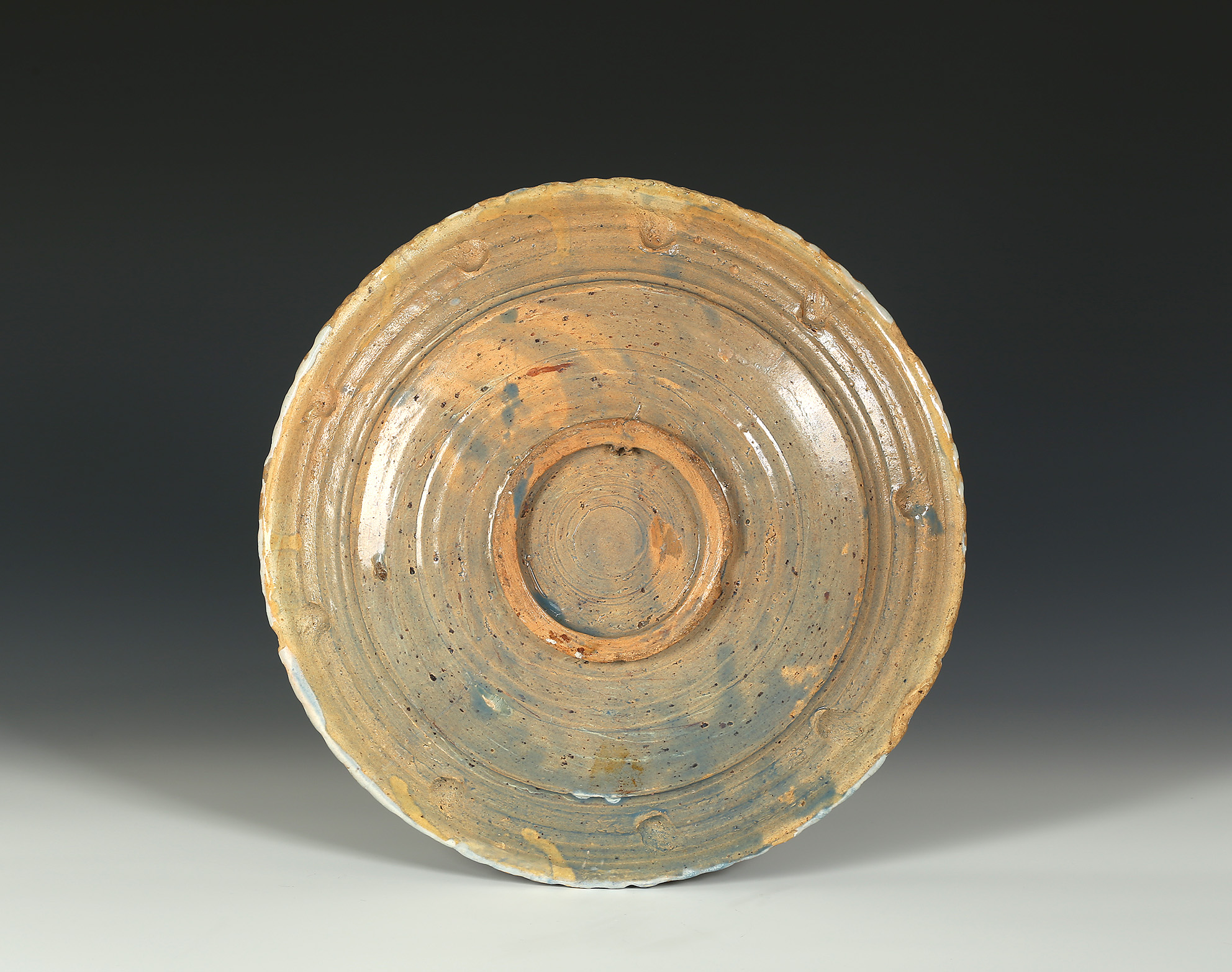 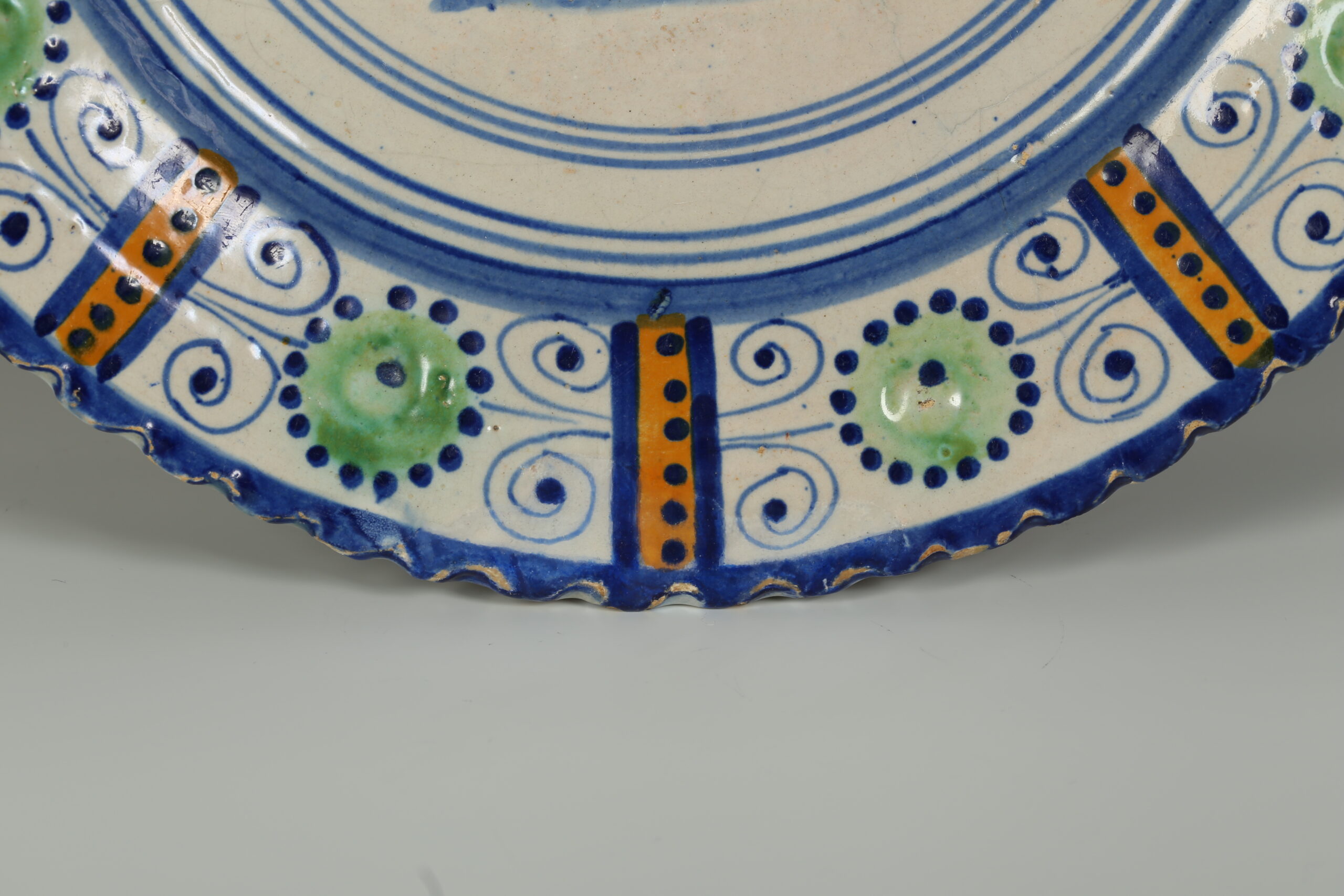 A DUTCH TIN-GLAZED ‘MAJOLICA’ DISH WITH A MILKMAID

Painted with a woman wearing a broad-brimmed hat and supporting two pails on a yoke. The compartmented border, with nine impressed bosses, loosely derived from Chinese ‘Kraak’ porcelain.

Italian potters first brought the techniques of tin-glazed earthenware to Antwerp at the beginning of the 16th century and their descendants slowly spread north, often fleeing religious persecution, to produce such wares in the provinces of Holland, notably in Haarlem but also Rotterdam and elsewhere.

These colourful so-called ‘majolica’ wares retain the palette introduced from Italy but were made economically by firing them in stacks separated by clay tripod stilts, leaving the three characteristic spur marks on the surface. Expensive tin oxide was not used on the reverse. 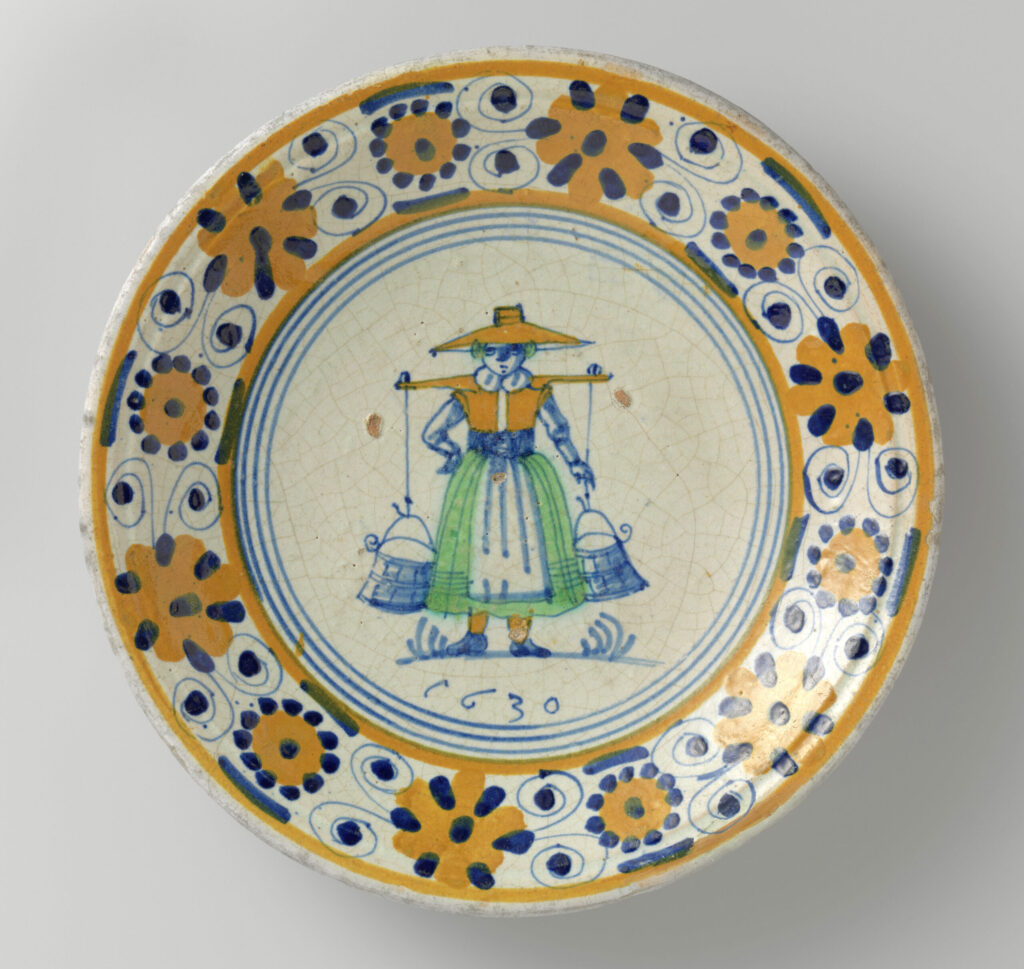 Our dish is rather more carefully drawn than the example dated 1630 in the Rijksmuseum and perhaps predates it slightly. This rare design is also found on two dishes (one dated 1643) and a tile in the Terra Verde Collection (Groen 2019, pp. 126-129) where they are tentatively attributed to Middelburg. A related design of a man holding milk pails is in the Musée Sandelin, Saint-Omer. 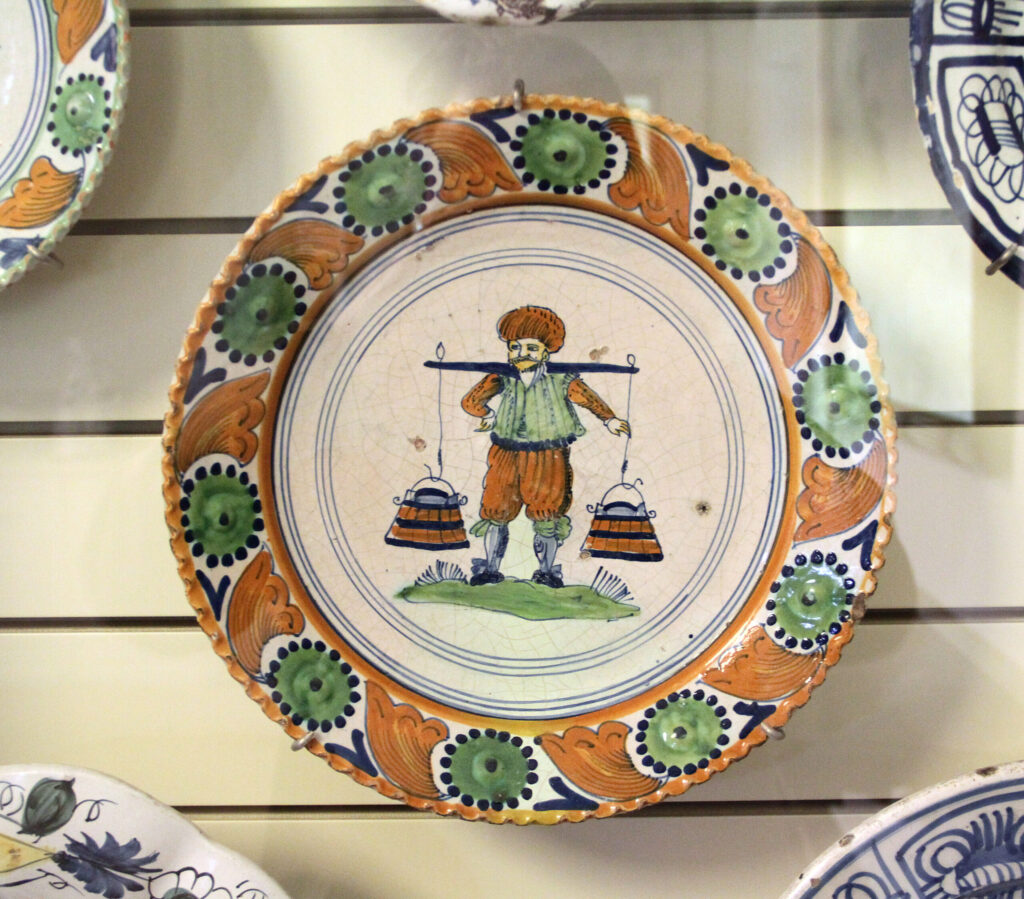 It is interesting to note that we acquired our dish in France in a saleroom in Fontenay-le-Comte just south of the Loire. In the 16th and 17th centuries the Dutch merchants bought wine from the Loire region, whilst the British historically favoured Bordeaux. Other pieces of early Dutch pottery have appeared in this coastal region in the past.

Few of these early dishes have survived outside of archaeological contexts. The competition from Chinese porcelain imported by the Dutch East India Company brought this production to its knees, it was not until the technical refinements developed in Delft that the Dutch tin-glazed pottery industry could compete successfully.

Condition:
A large section between 11 and 2 o’clock neatly restuck, a crack from 5 o’clock to the centre cleaned and stabilised
A large chip at 6 o’clock, 8.5 cm long x 2.8 deep at the front restored, this is a shallow chip which only extends slightly on the reverse