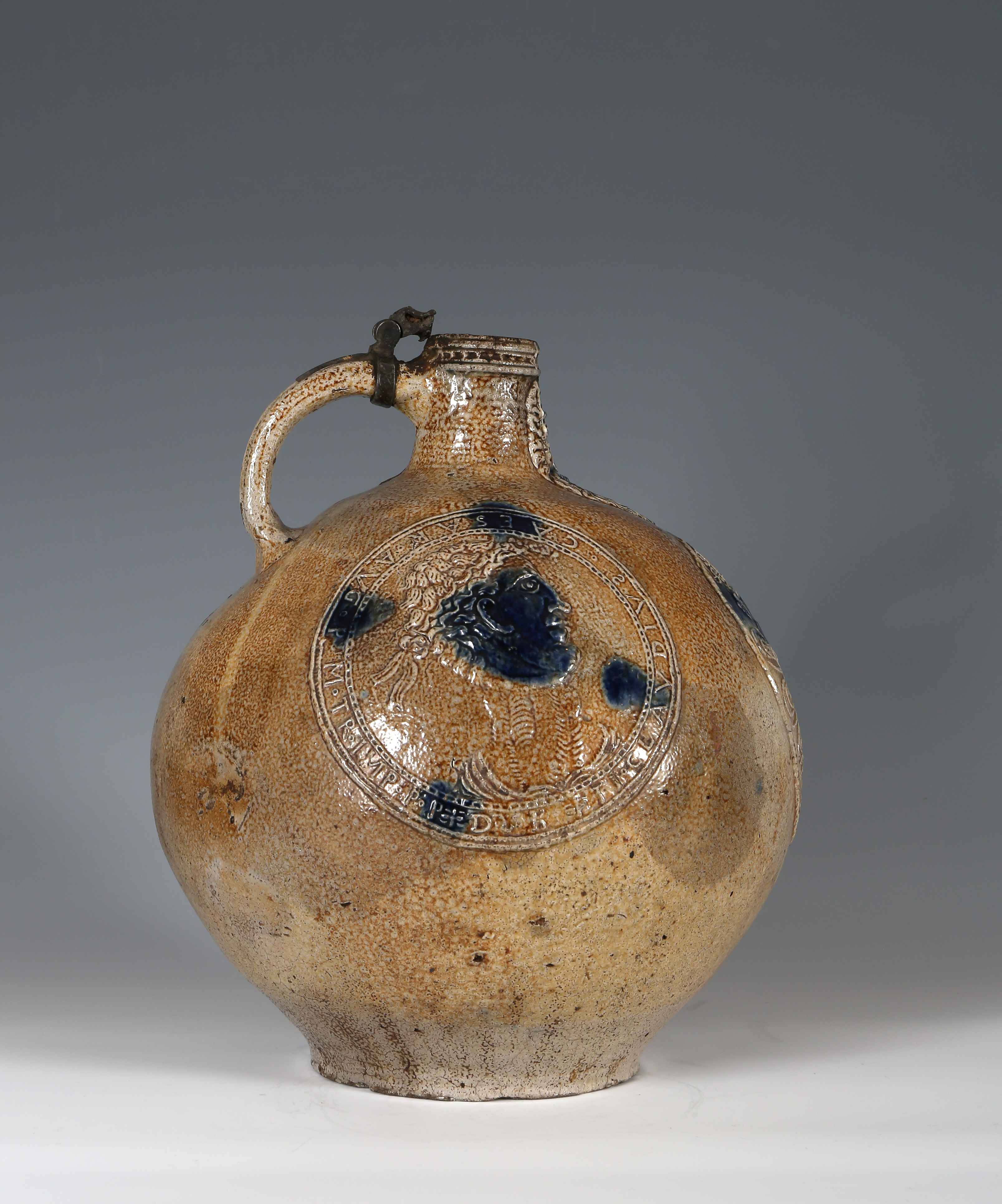 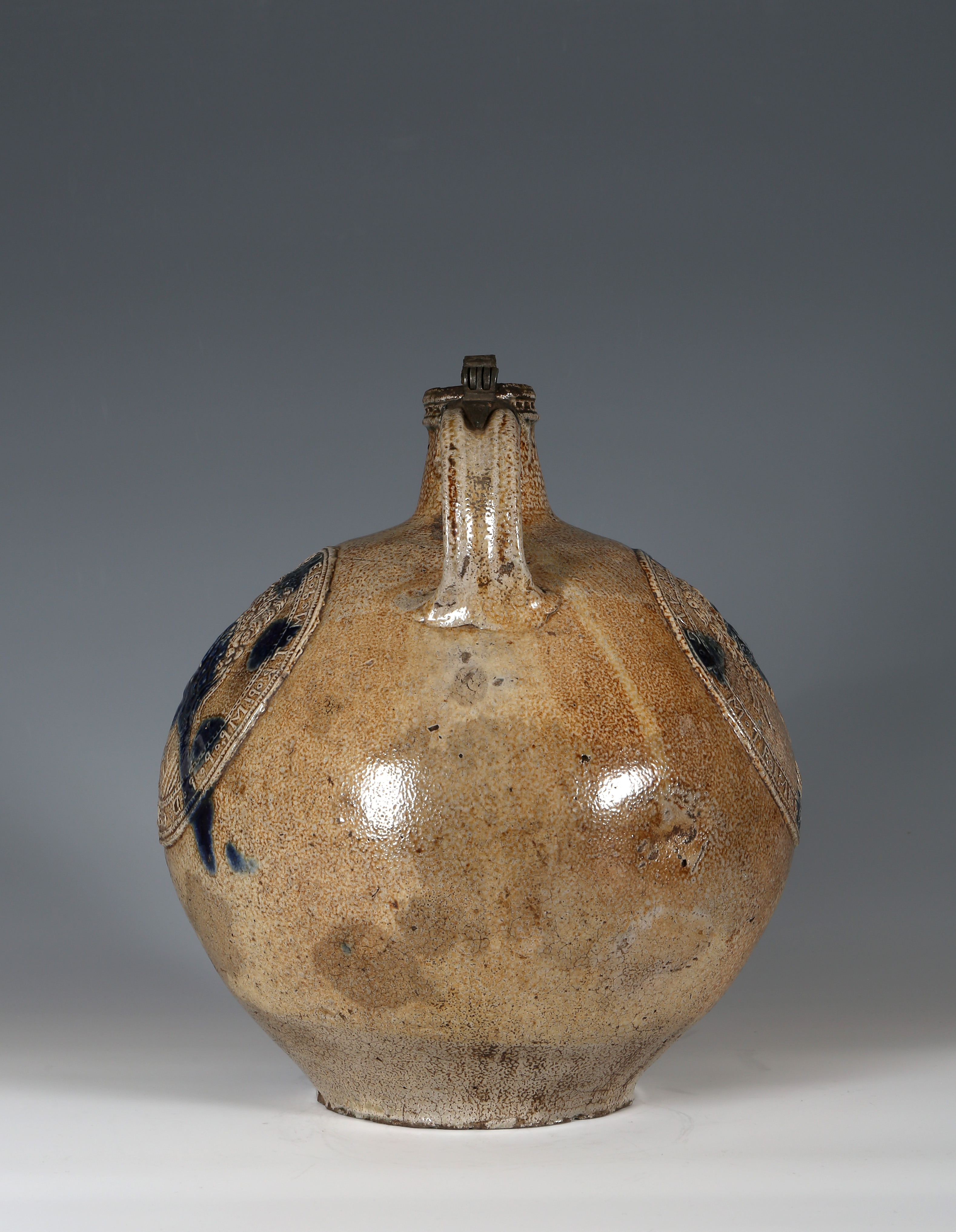 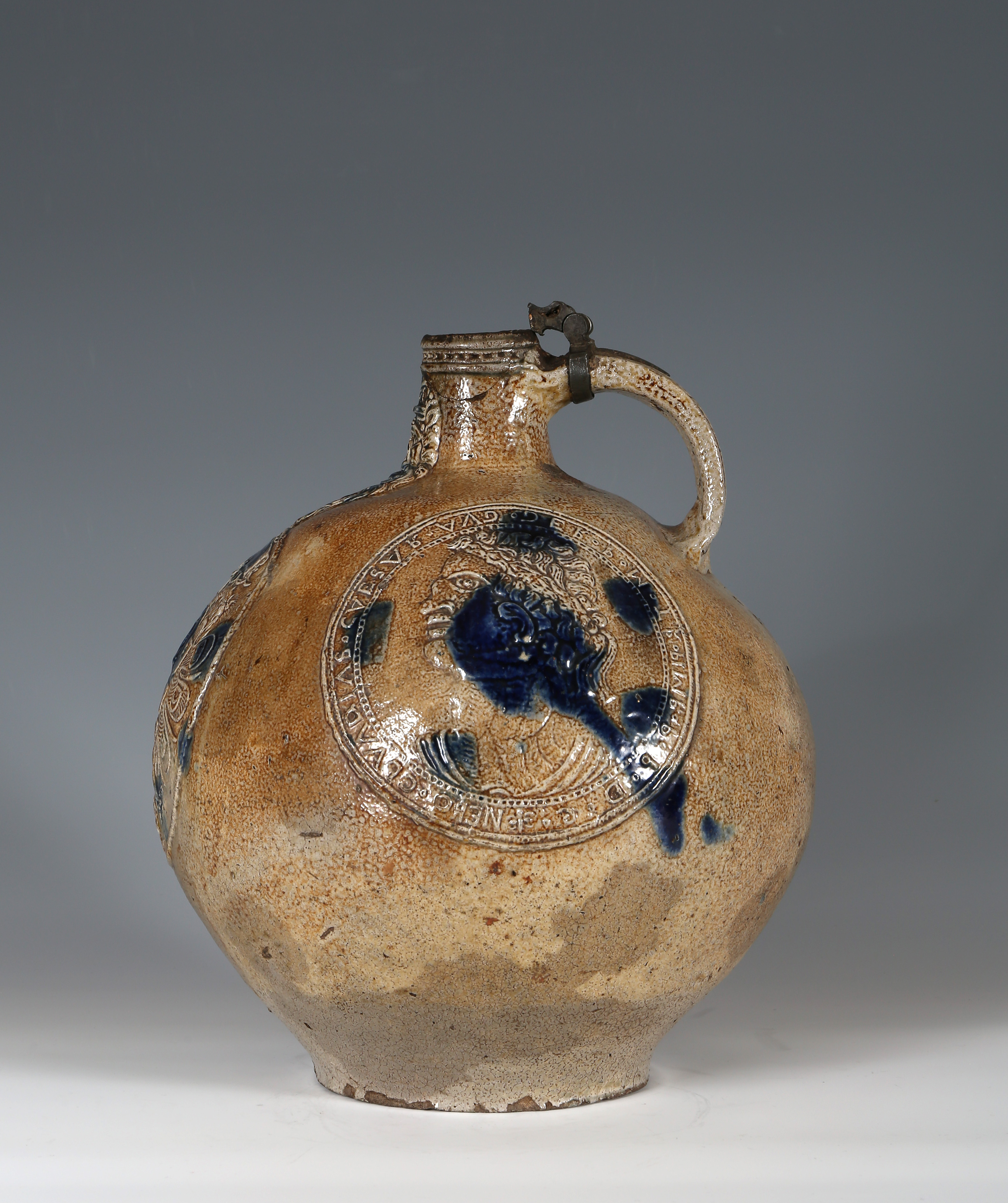 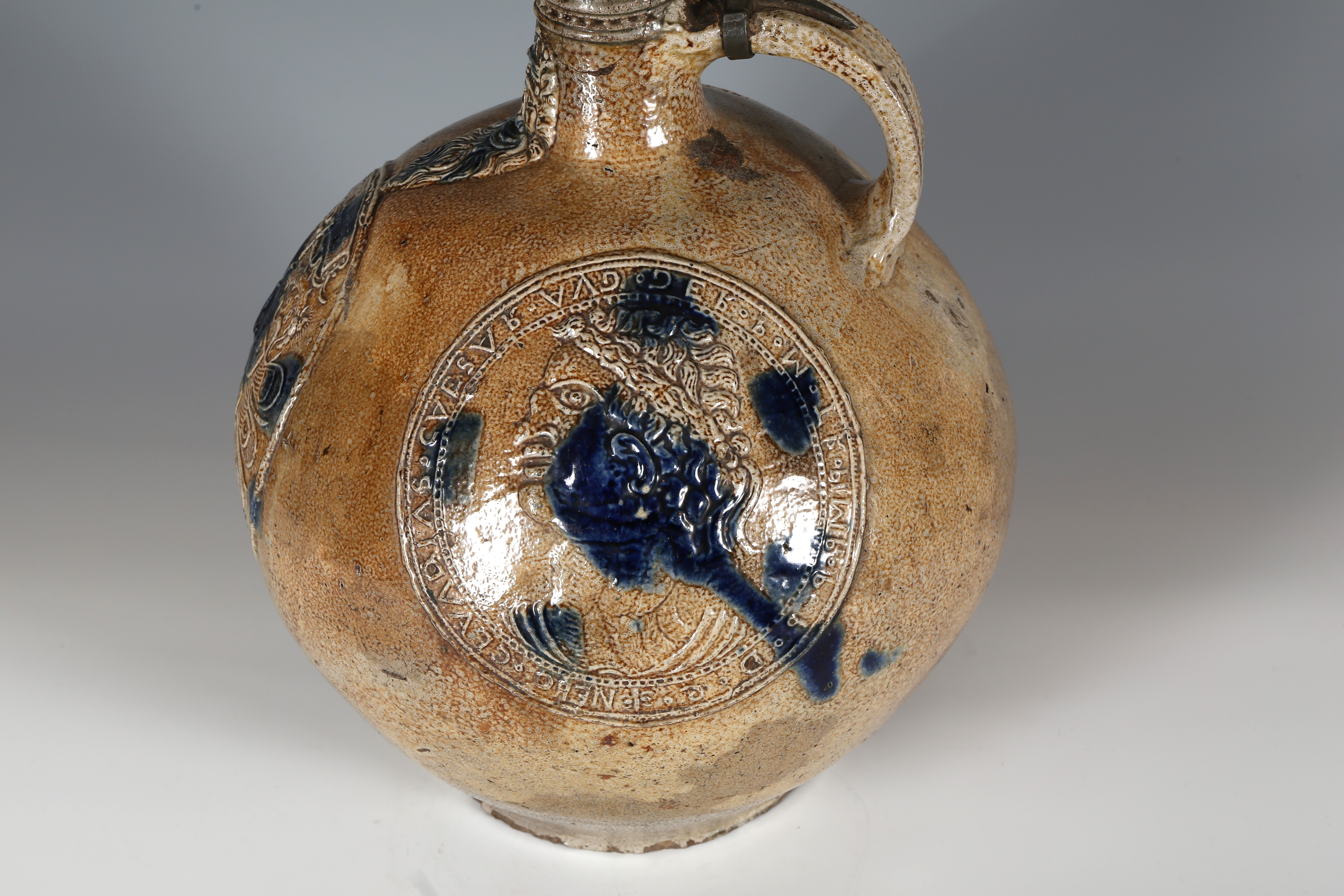 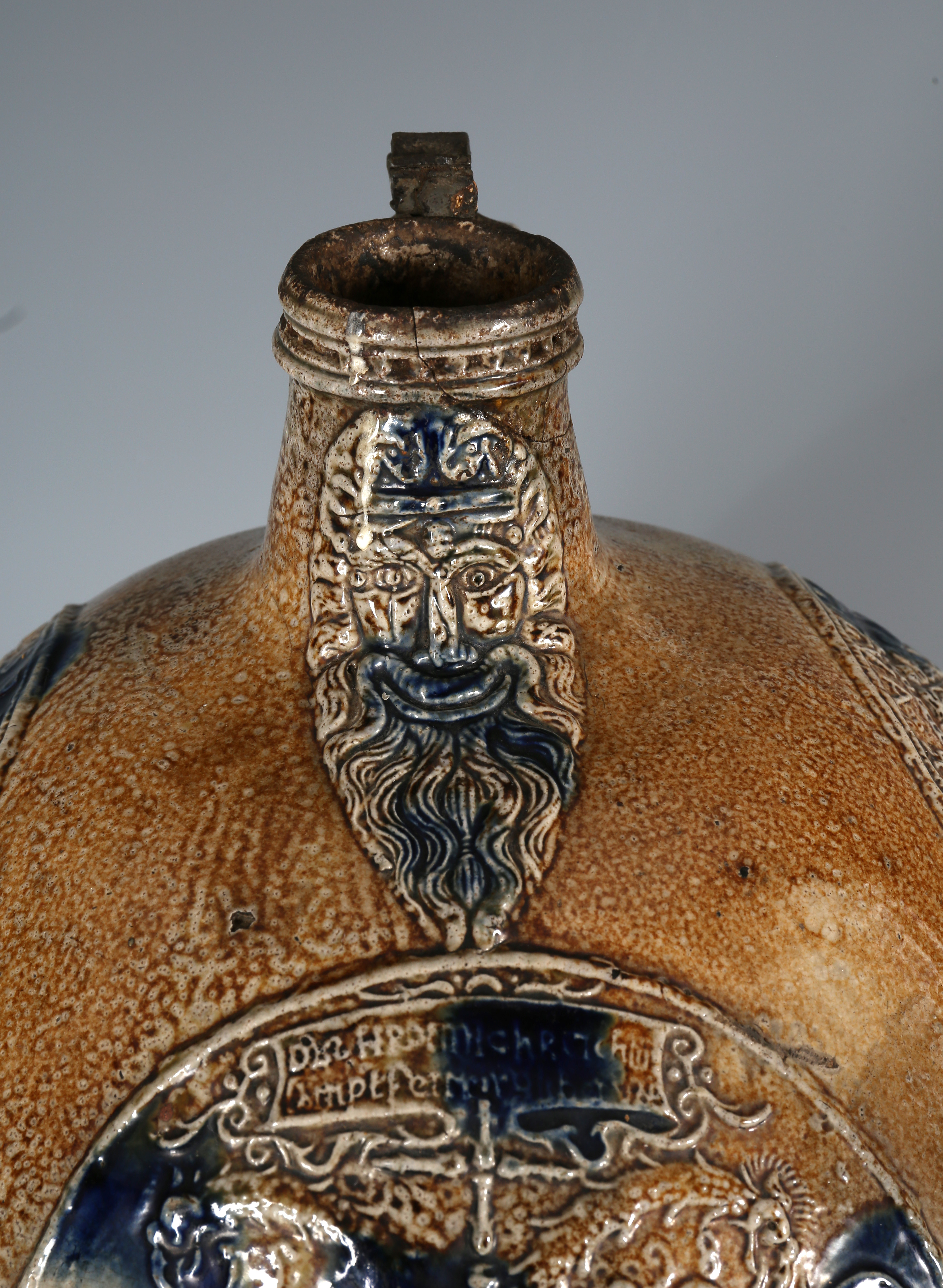 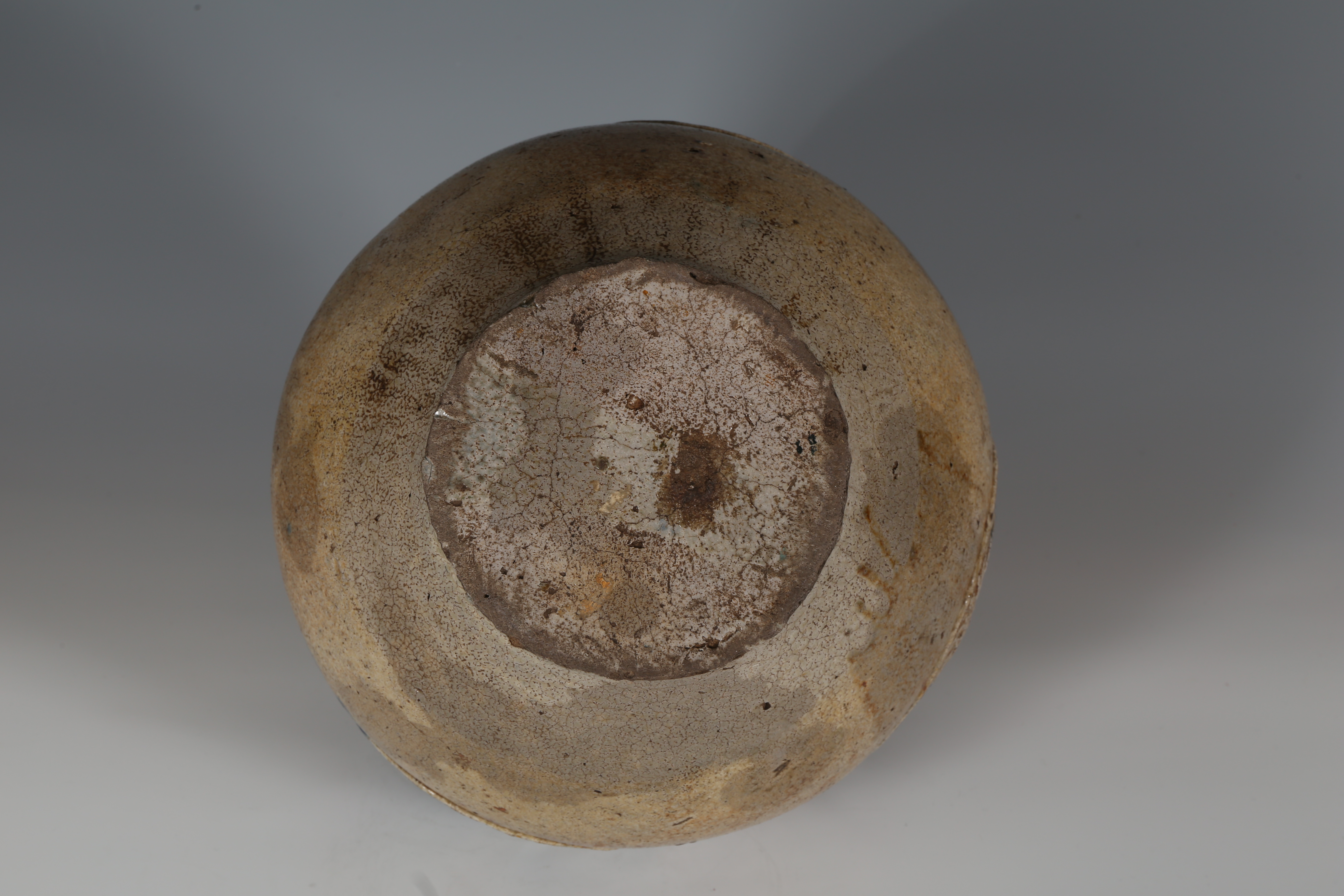 The large bulbous body with dabs of cobalt-blue under a mottled brown salt-glaze with simple ribbed handle. Applied on the front with a crowned bearded mask above a roundel containing the date 1598 and the Imperial double-headed eagle and the orb of state, the Emperor’s secular symbol, with armorial shields of its provinces on the outspread wings below an indistinct inscription reading:

‘DAS H ROMICH REICH’, the second line is unclear but probably reads ‘Mitt sampt seinen glider wape’, (The Holy Roman Empire with the arms of all its parts).

The sides applied with roundels of the Roman Emperors Claudius and Nero within inscriptions reading:

The depiction of the Reichsadler with the armorial devices of the Holy Roman Empire’s constituent parts often decorates enamelled glass Reichsadlerhumpen of the same period. The earlier depictions usually have the crucified Christ in the centre, the orb of state is seen from the 1580s The choice of the Emperors Claudius and Nero where chosen as renaissance motifs in the north for Claudius’s association with Greek philosophy, he is depicted bearded as a Greek philosopher and Nero for his patronage of the Arts.

The pottery industry in Frechen had been active since the 13th century but rose to prominence in the early 16th century when potters were forced to leave Cologne after powerful civic opposition to firing taking place within the city walls. We know from their names that some of these potters had originally come from Frechen only 10 km south of Cologne. Religious intolerance of the Protestant-Lutheran potters may also have forced their relocation. Frechen had good clays suitable for the high firing temperatures required for salt-glazed stoneware and excavations have revealed almost 50 separate kilns.

The ‘Bearded man mask’ which became such a feature of jugs at this period probably derived from ‘Wild Man’ myths prominent in North-European folklore. The popular name for these jugs, ‘Bellarmines’ was invented in jest by the Dutch and English to ridicule Cardinal Roberto Bellarmino a zealous opponent of Protestantism.

In the mid-16th century Frechen supplanted Raeren as the main exporter of stonewares to the large British market due to the struggle by Spain to maintain control of Southern Netherlands and consequent isolation of Antwerp and thus Raeren. Frechen, being on the Rhine, was unimpeded and dominated the long distance export trade to England and the emerging North American markets. Trade was badly interrupted by the 30 Years’ War (1618-48) and never recovered.