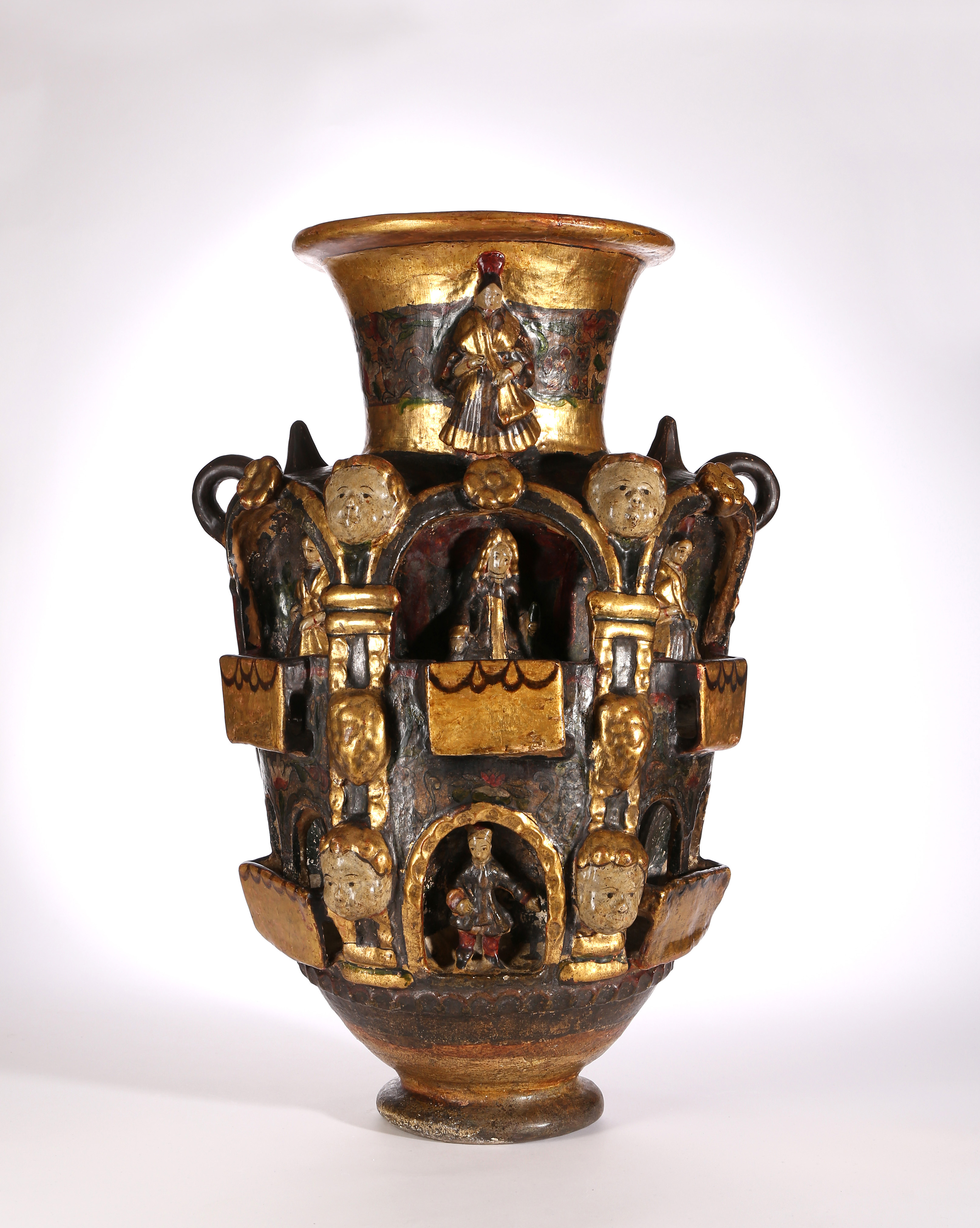 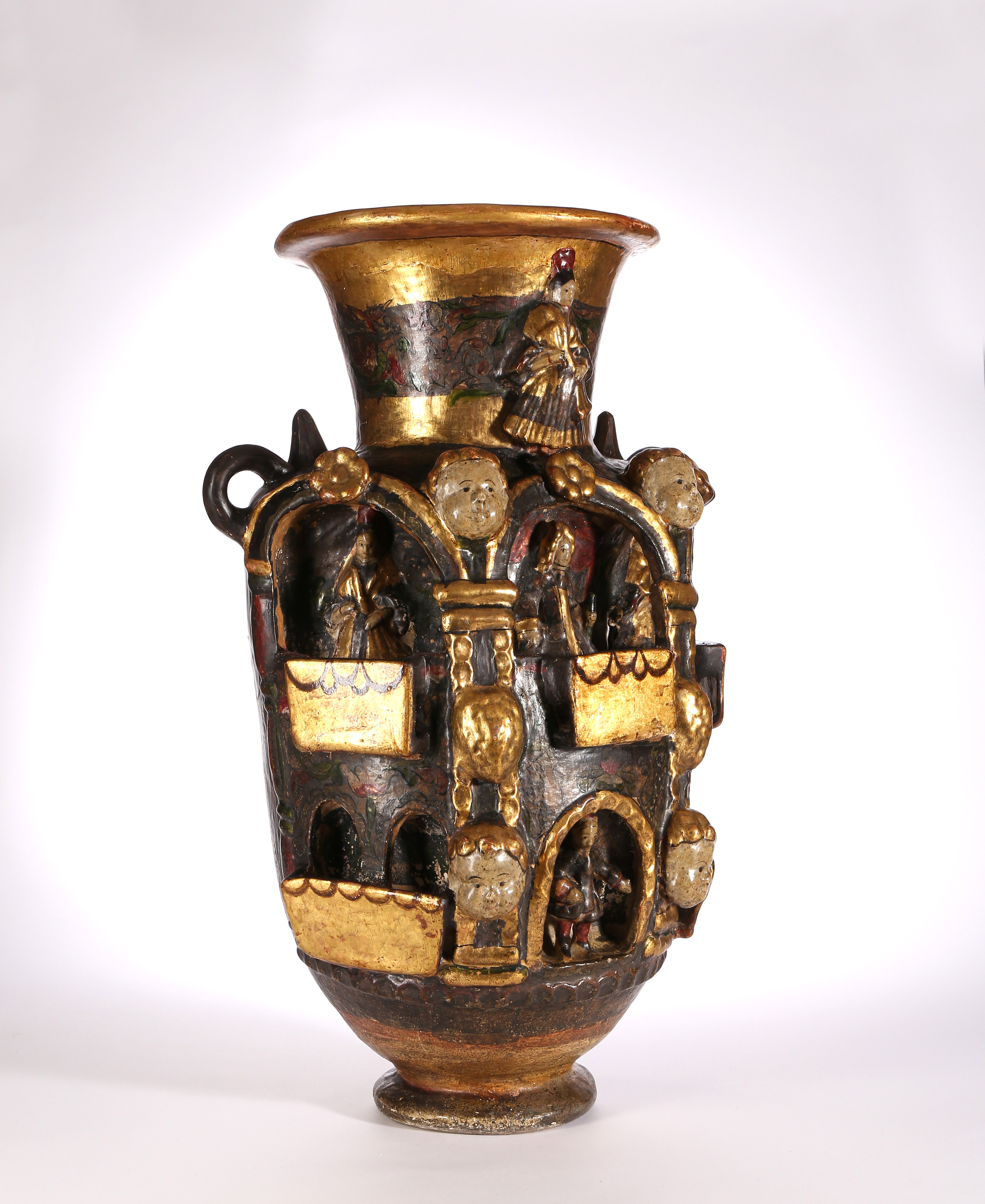 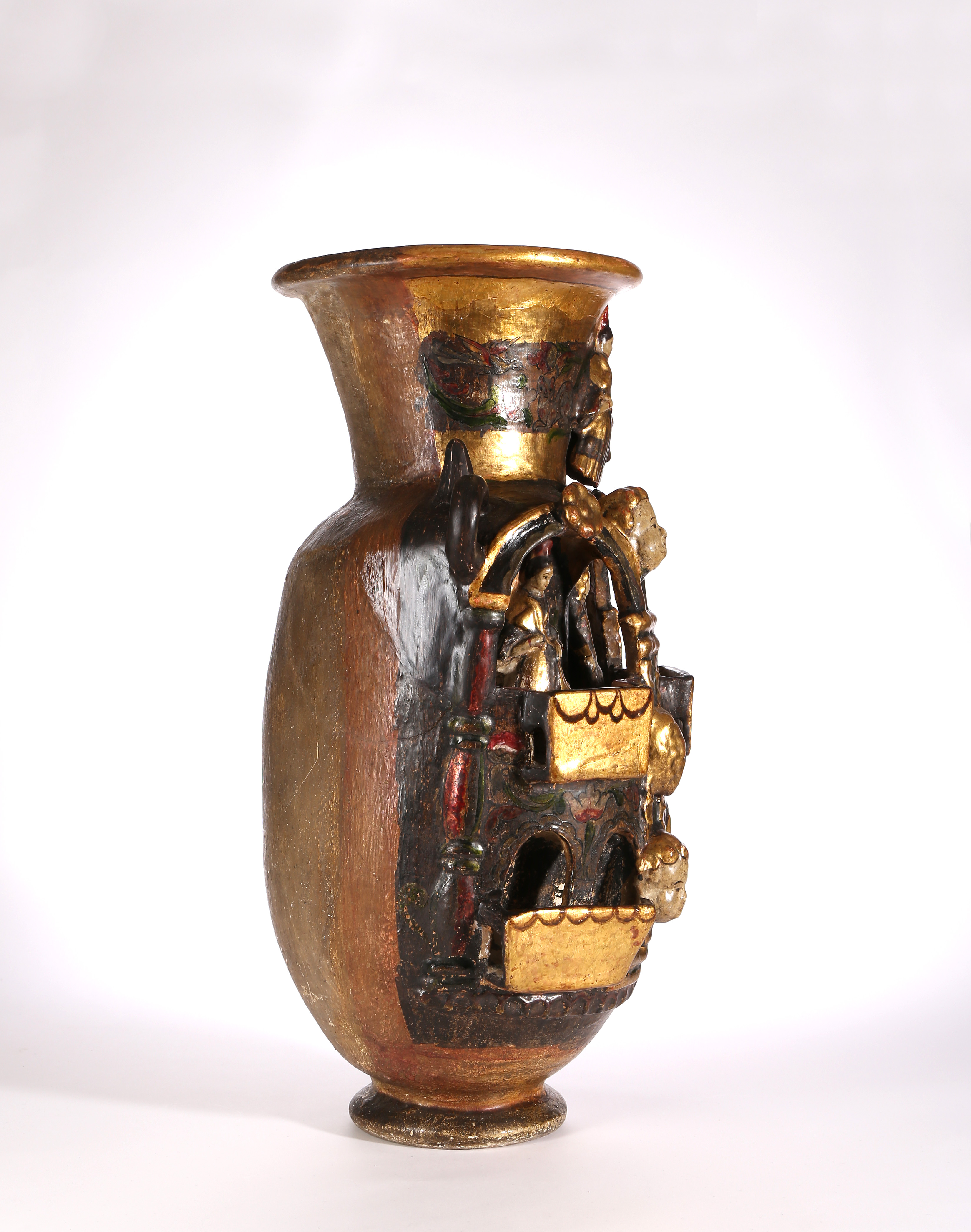 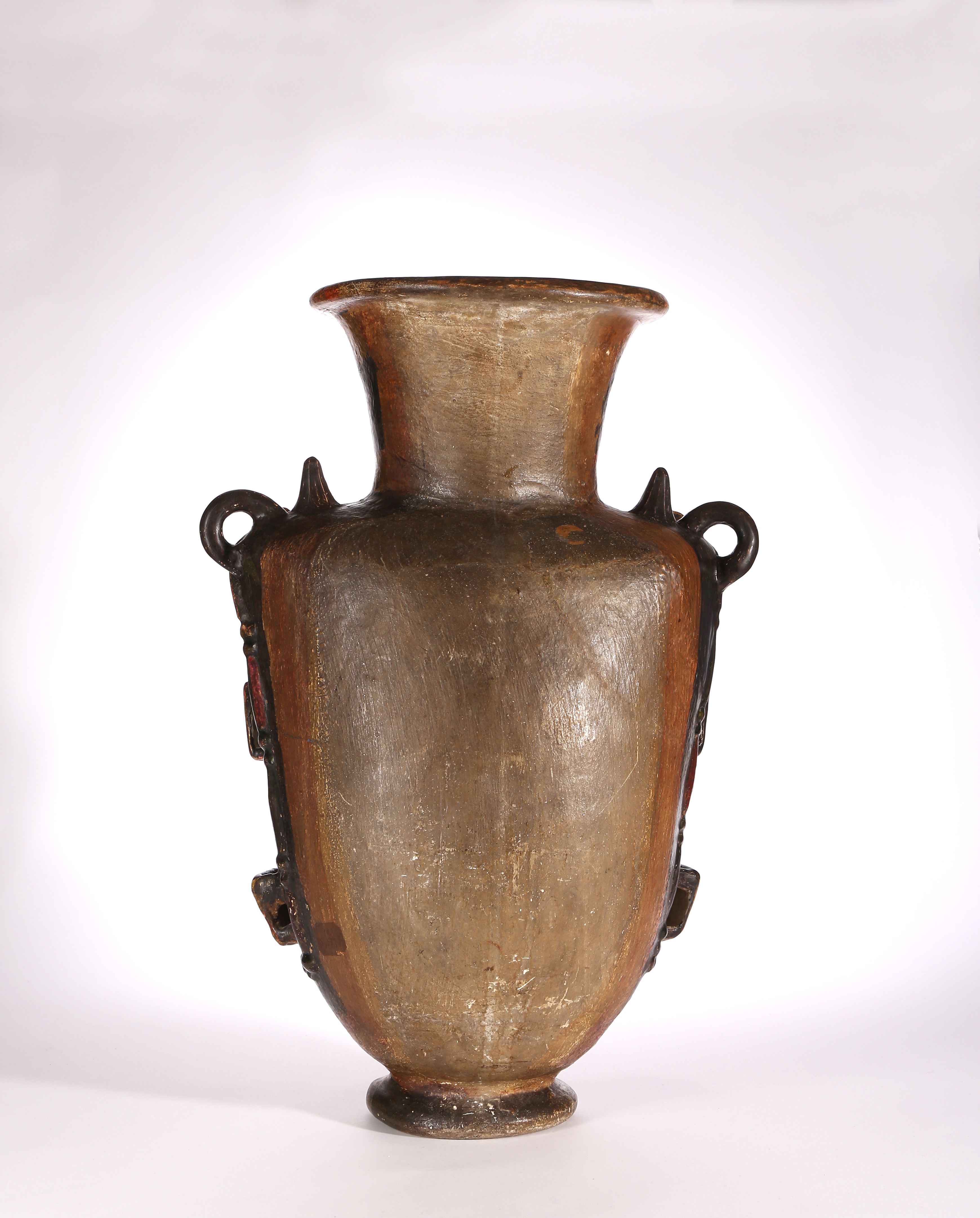 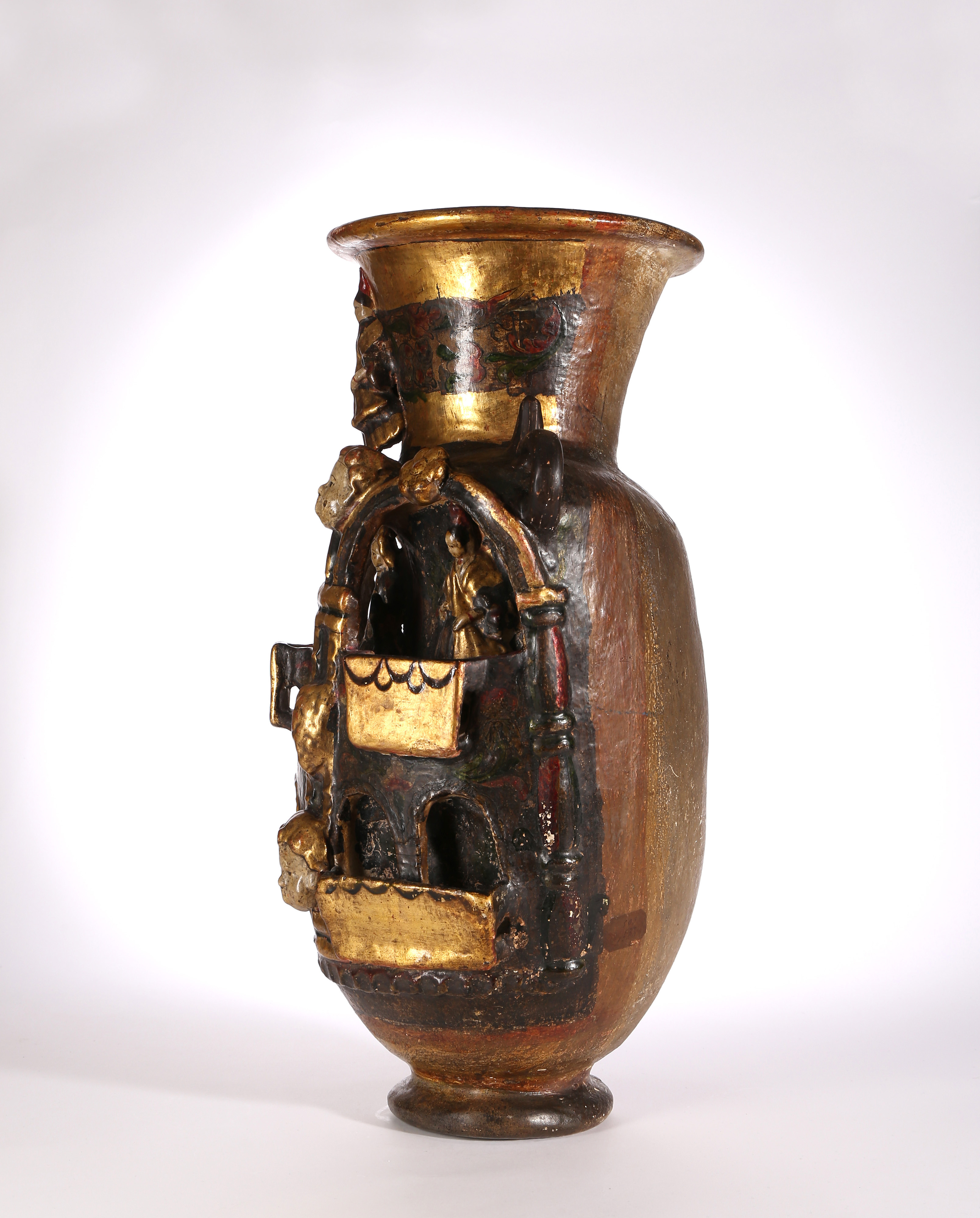 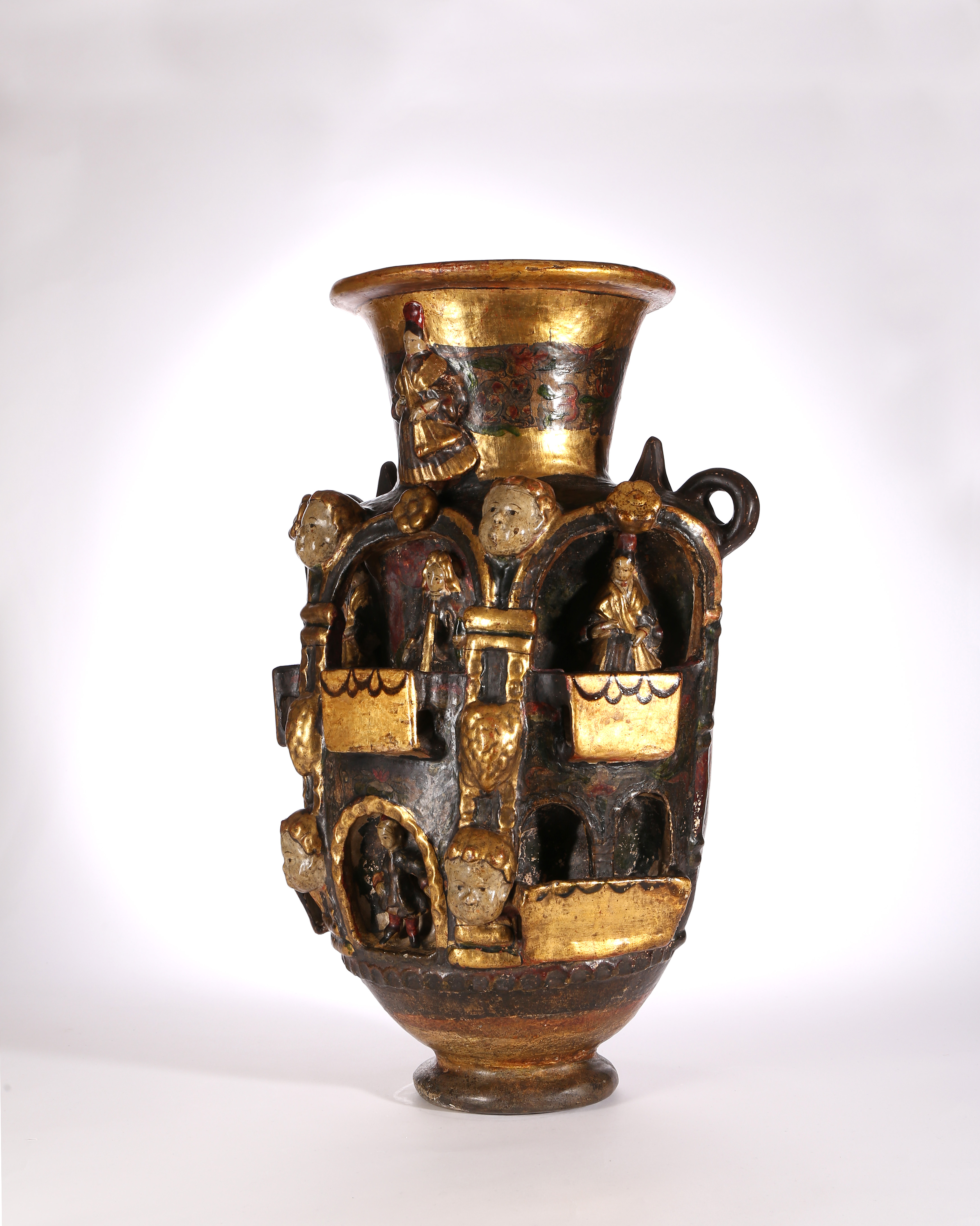 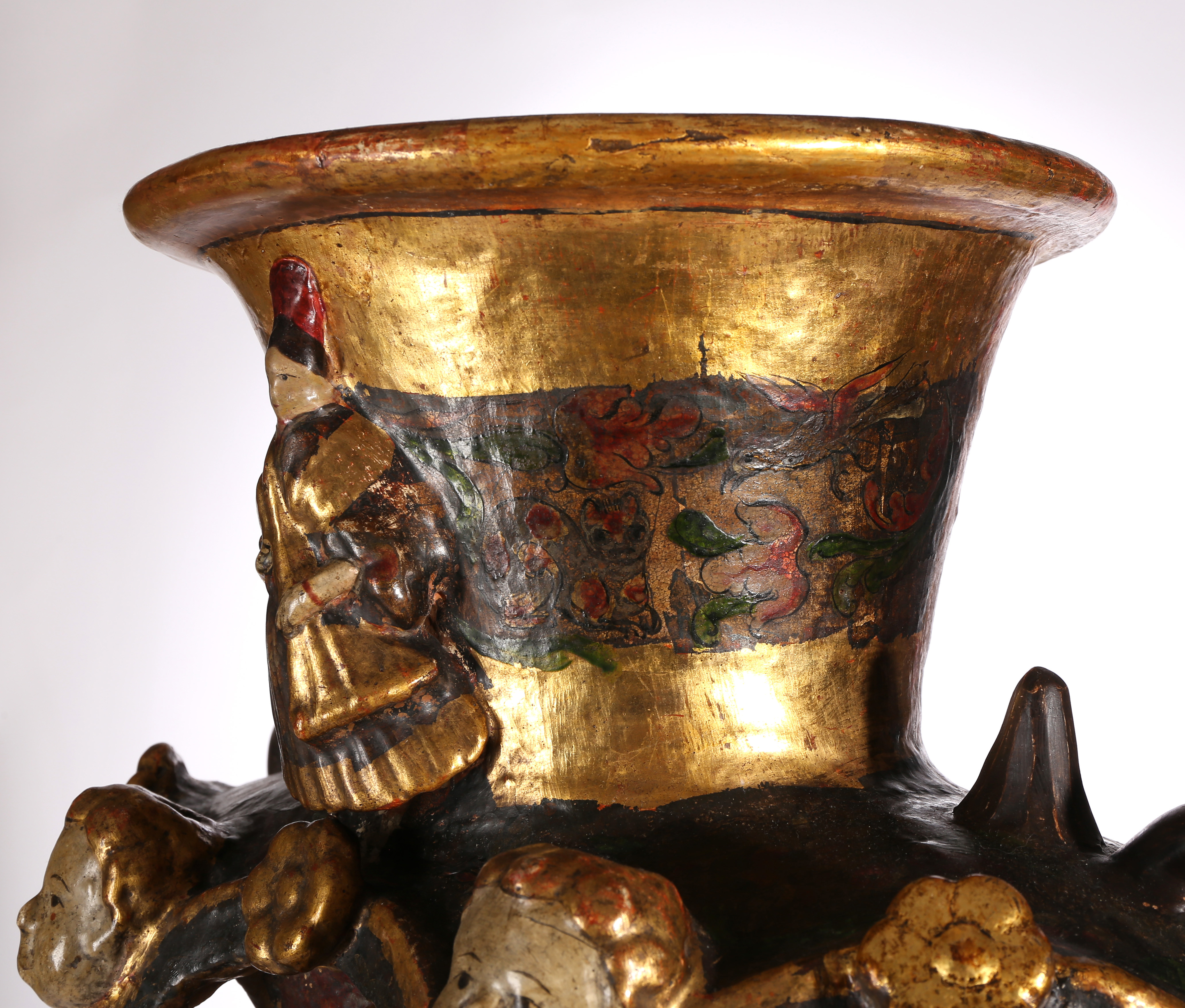 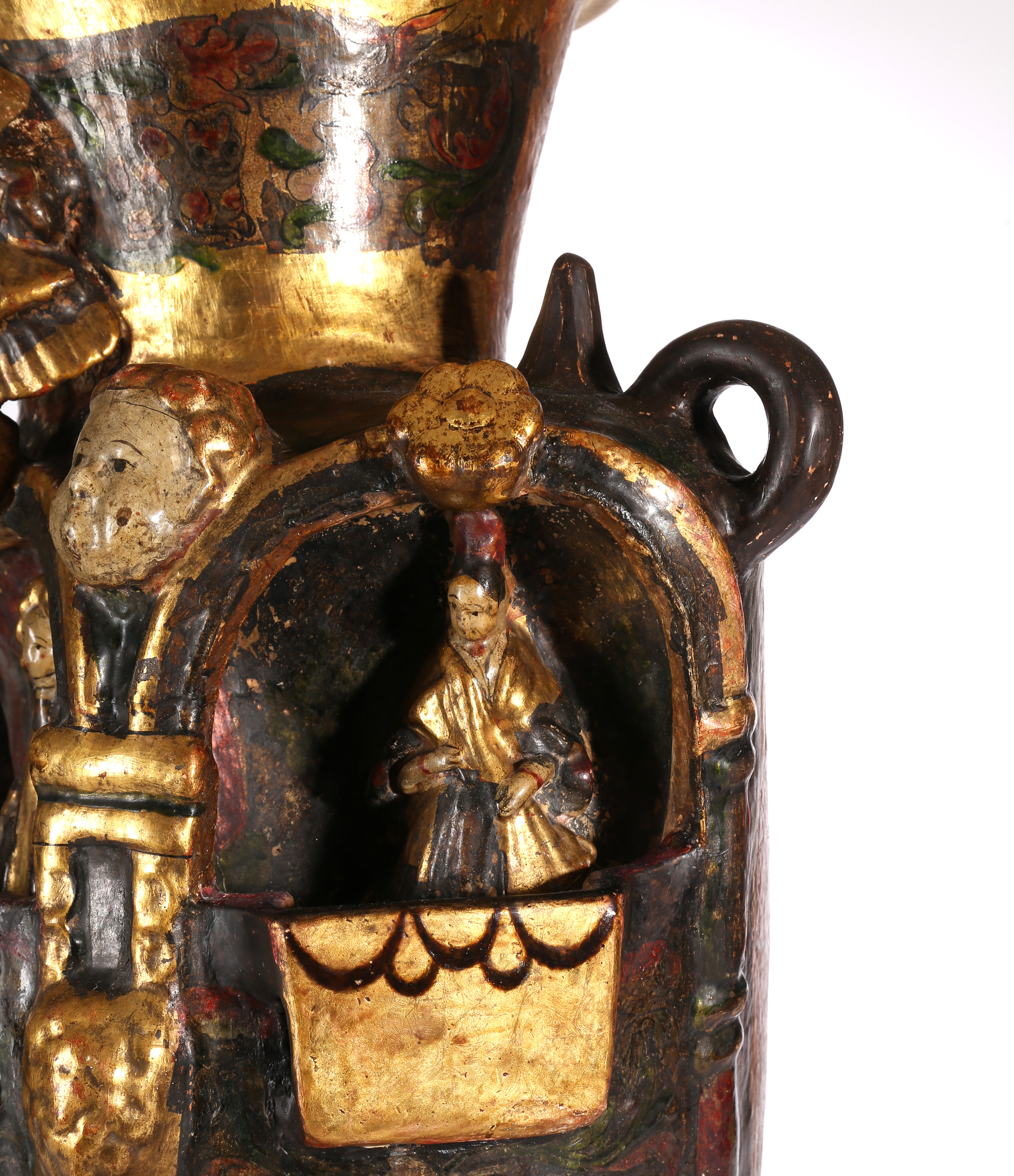 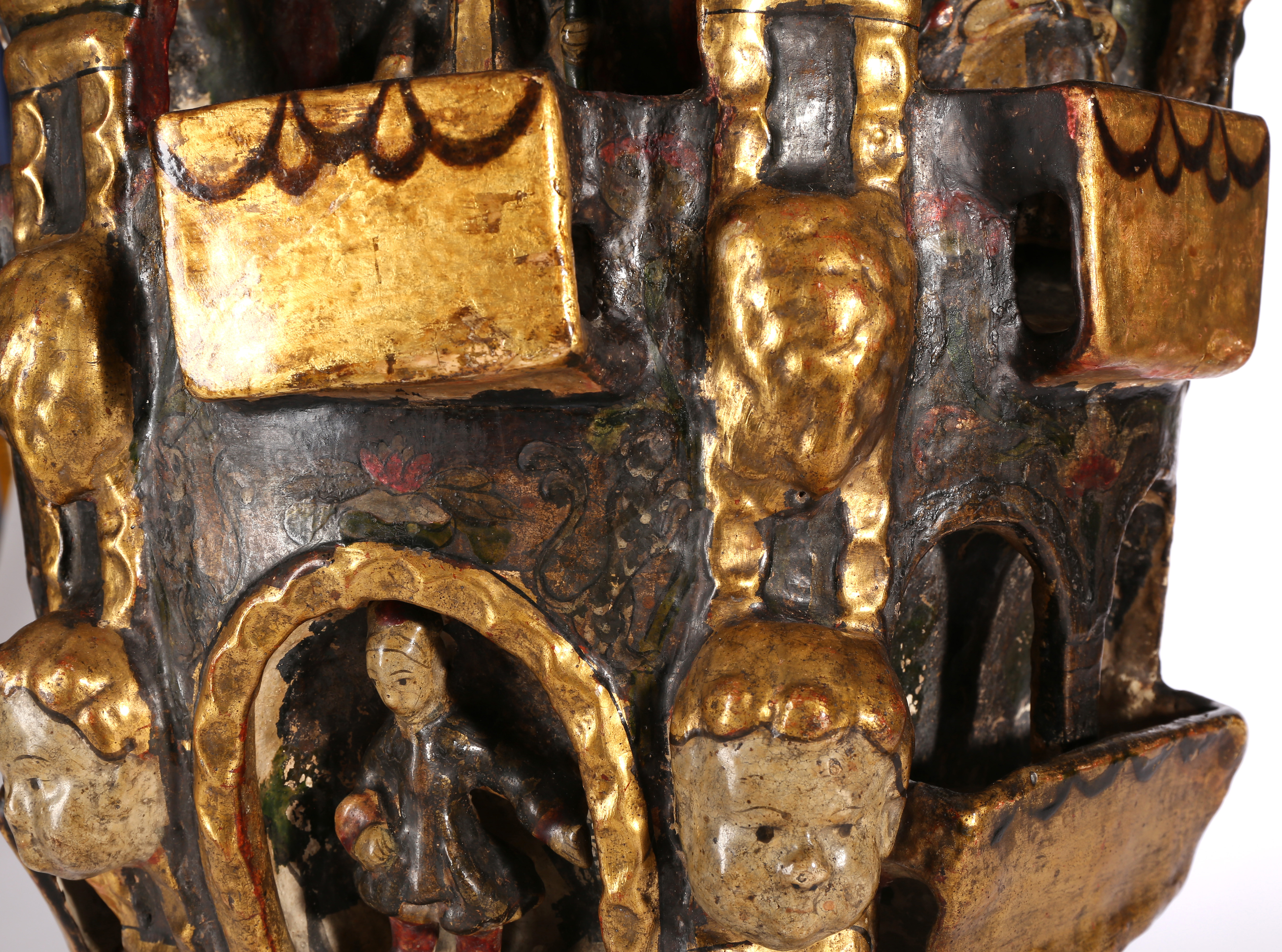 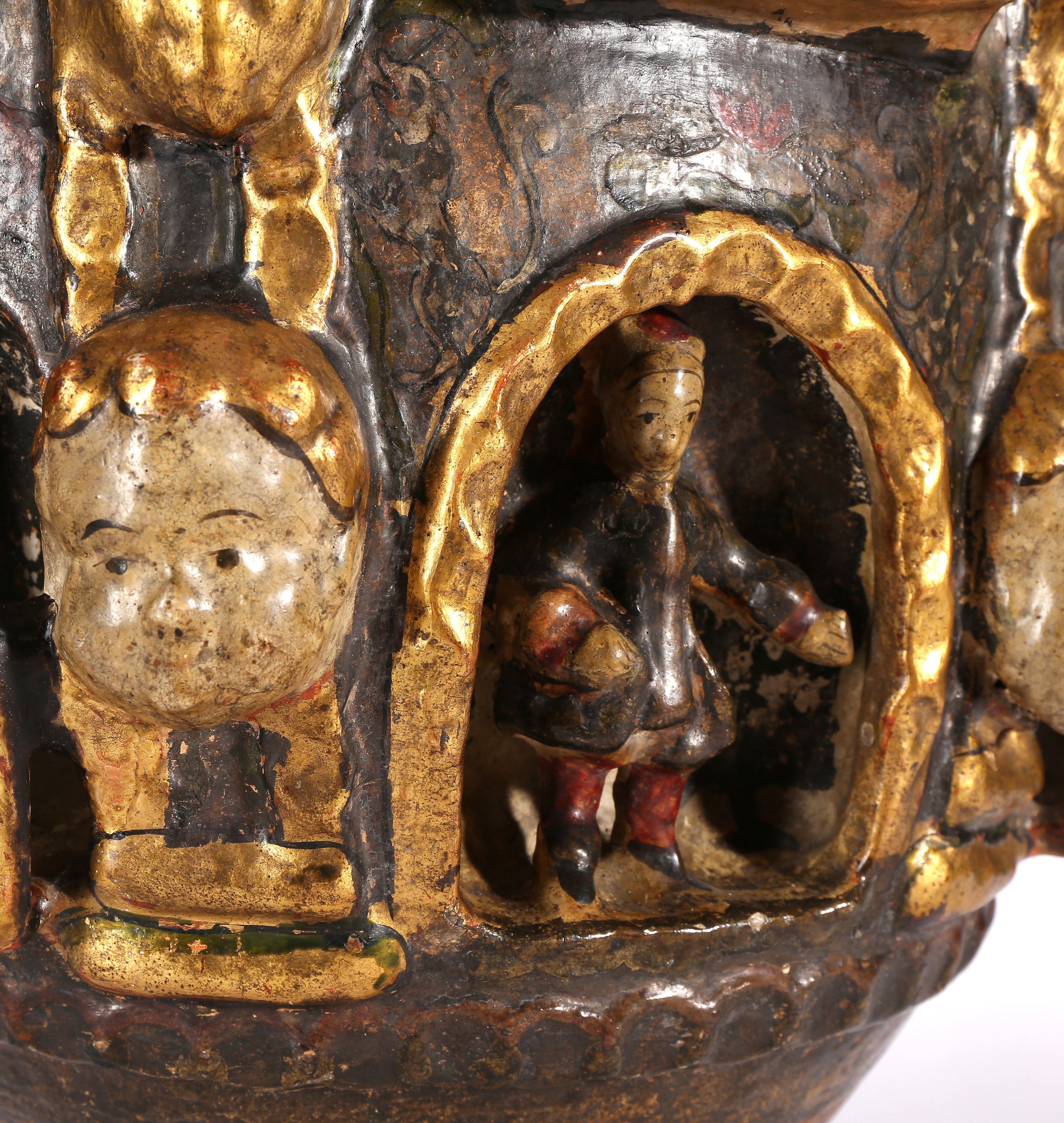 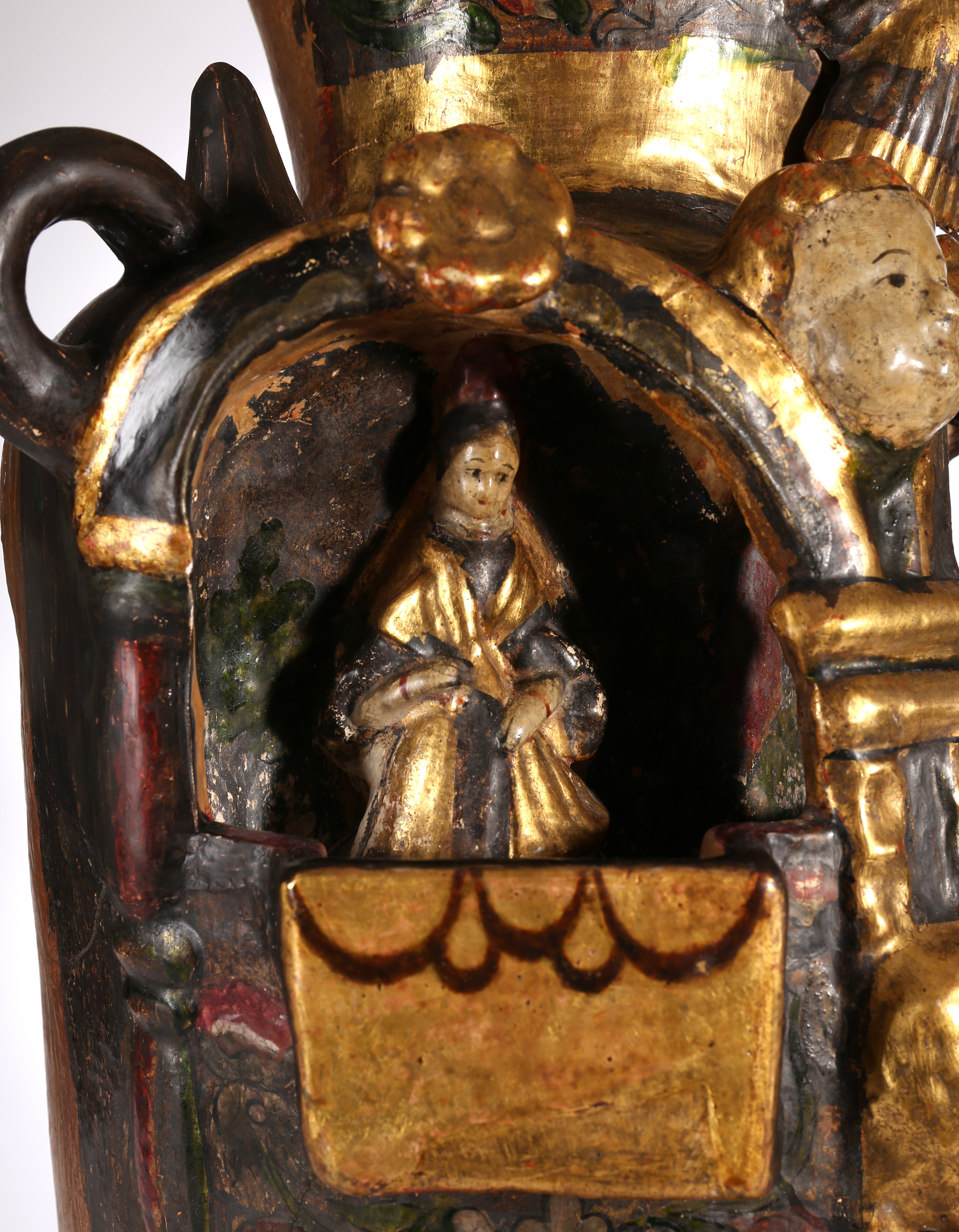 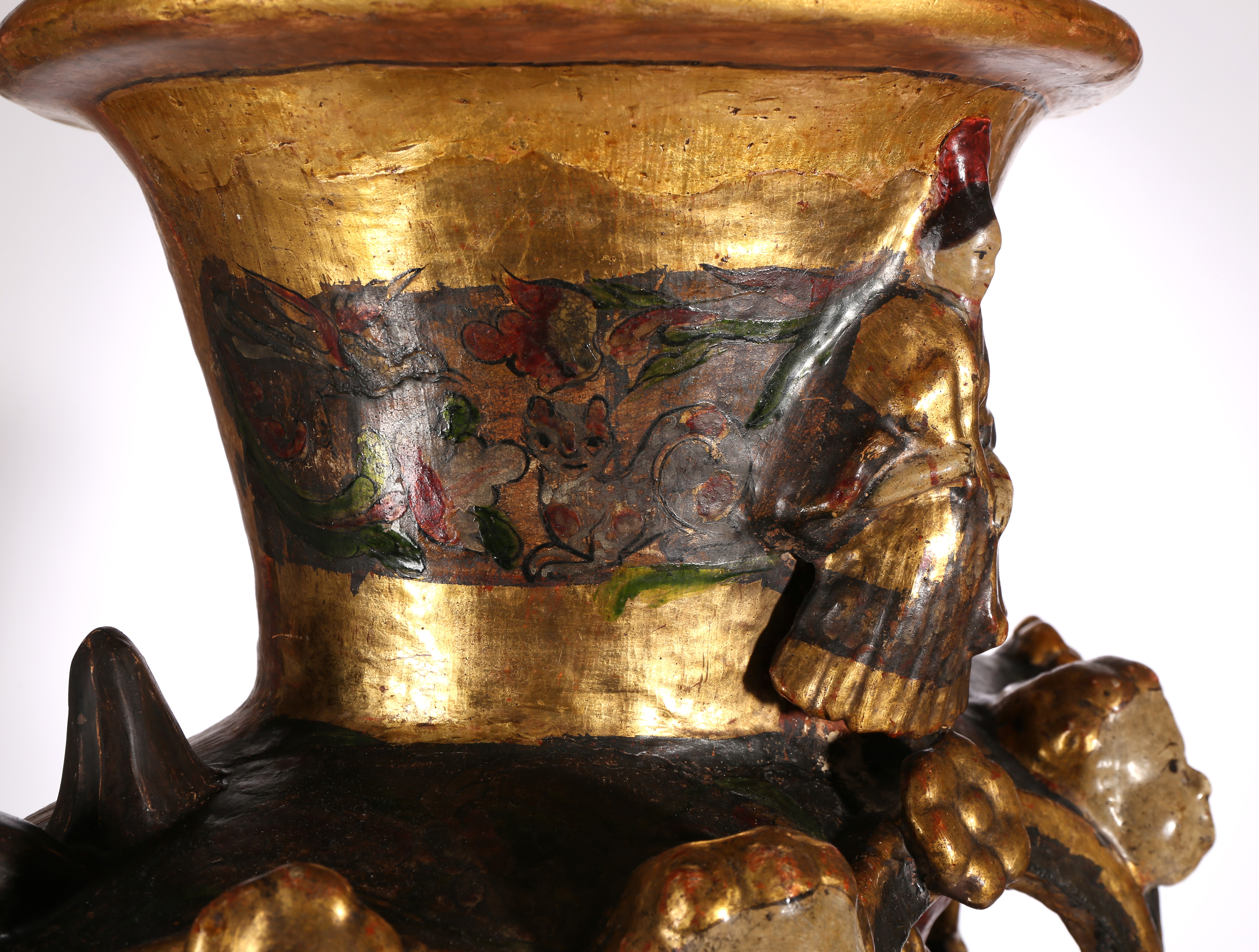 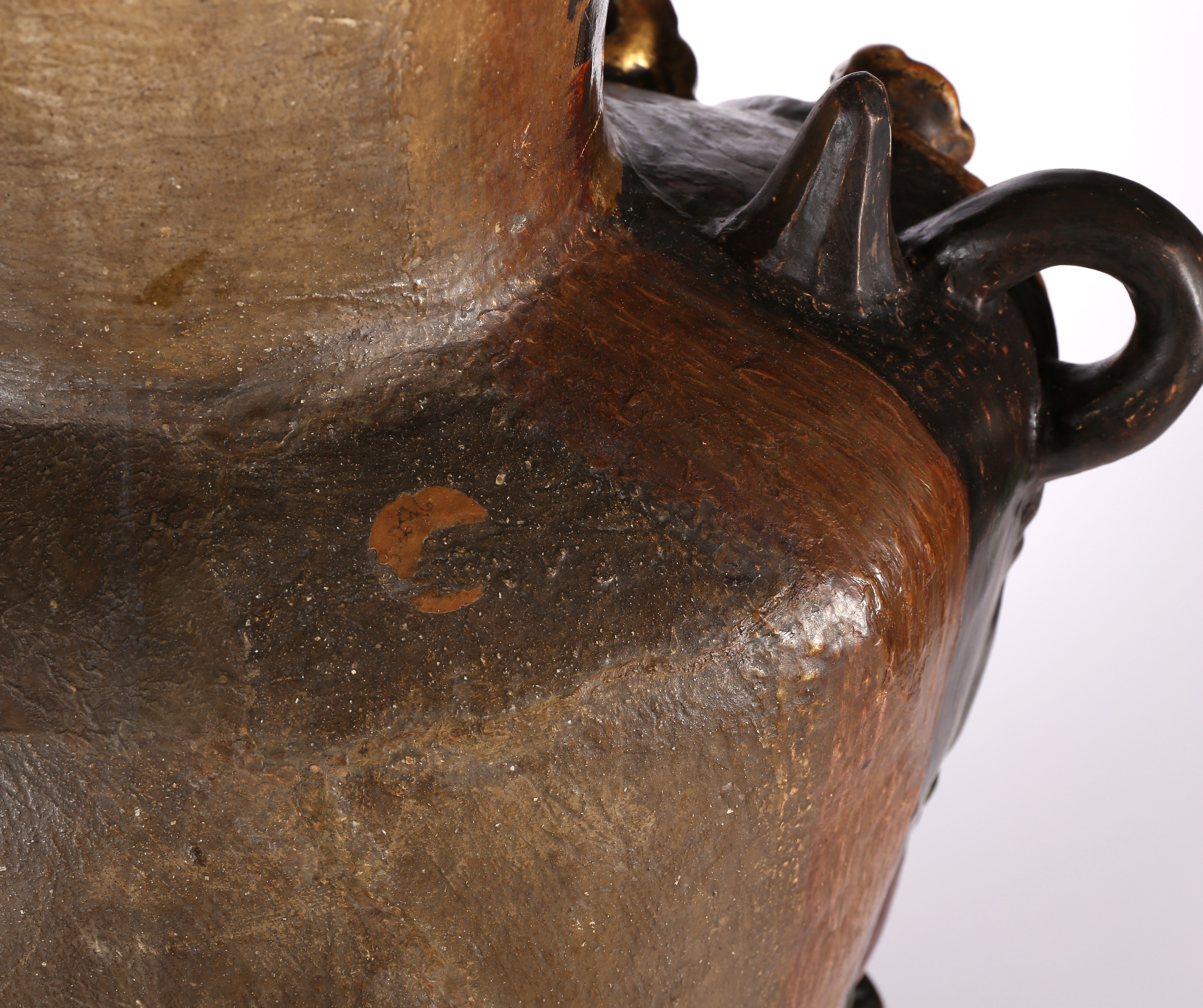 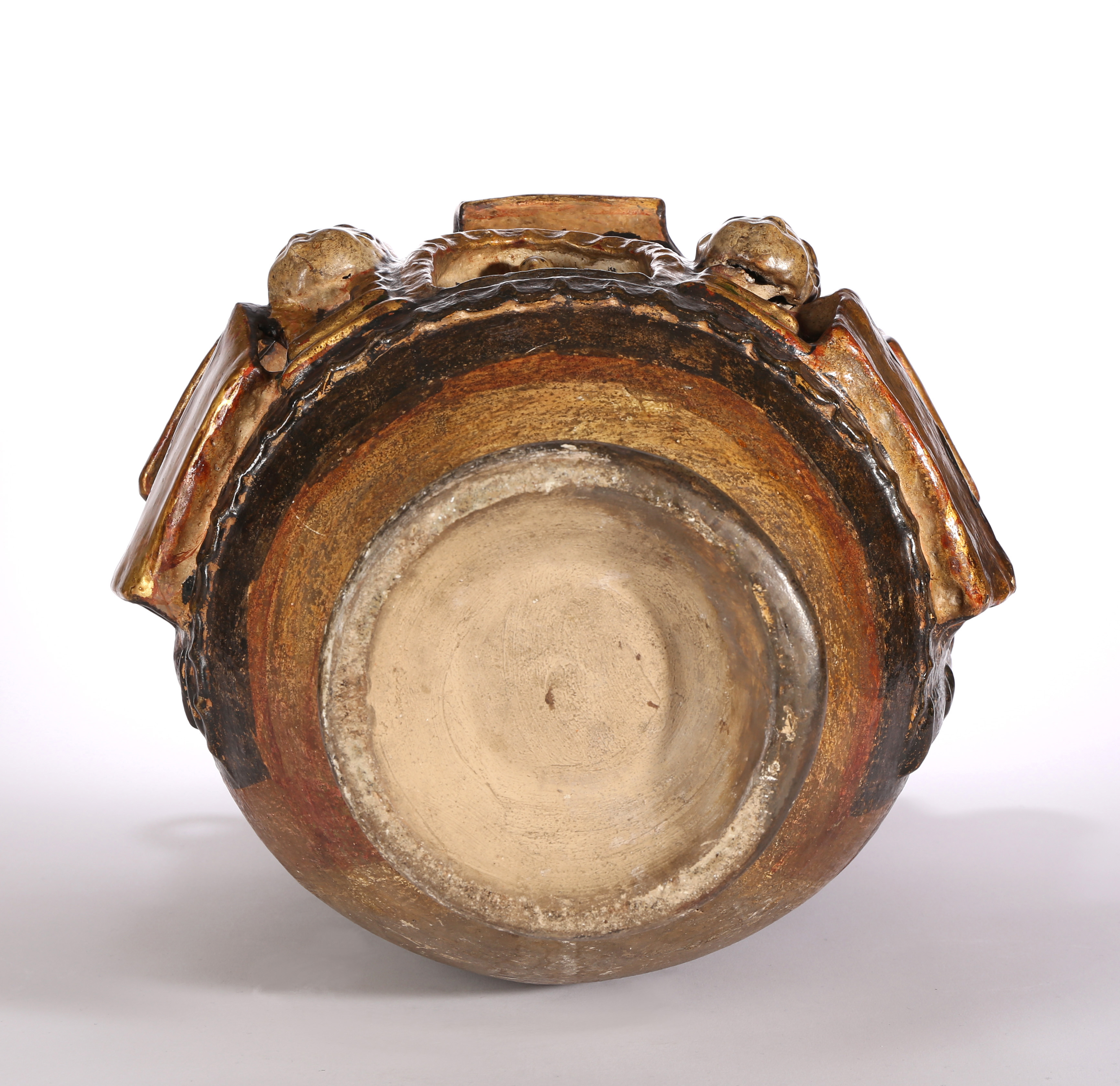 Modelled on the front and sides with Spanish colonial figures in balconies within raised arches and applied child’s heads, the neck with a further figure of a lady with a fan and high mantilla, the reverse plain. Decorated with unfired paint and gold and silver leaf over a gesso or lime wash layer with flora and felines including what might be coati.

This elaborately decorated vessel belongs to a small group of Tonalá tibors or jars that are lavishly gilded and decorated with colonial figures dressed in fashions datable to between 1695 and 1730. The best documented examples of this group are those in the Museo de América in Madrid that were bequeathed by Mª Josefa de la Cerda y Palafox, Condesa de Oñate in 1884.

Redwares from Tonalá in Mexico were hugely prized in Europe and can be found in the most illustrious courts such as Palazzo Reale of the House of Savoy in Turin, the Palazzo Pitti, Florence, the Hapsburg Kunstkammer in The Kunsthistorisches Museum, Vienna and the Vatican. They are also listed in the inventories of the Saxon Royal Collection in Dresden. They were prized for their exoticism and the sweet smell inherent in the clay which was released when they were filled with water. They were also believed to have medicinal virtues. They are rarely found on the market today.

In 1675 Count Lorenzo Magalotti stated:
“The earth contains certain veins of clays, odiferous by their nature. The best of all are found in America… …vases and vessels have the property of imparting to the water poured in to them the subtle and sweet aroma with which they are impregnated. Ever since the day when the first specimens were imported into Europe the scented pottery of America has found numerous admirers, and the taste for that precious ware has spread with an amazing rapidity into the upper classes of Society. Now, they are counted amongst the essential adornments of all mansions which have pretensions to supreme elegance; they shine as precious works of art in the palaces of Kings and princes.”

Count Magalotti was not exaggerating the esteem in which they were held, they are frequently depicted in paintings of the period. In Velasquez ‘Las Meninas’ the Infanta Margarita is being presented with a small Mexican redware bucaro jug by her maid of honour.