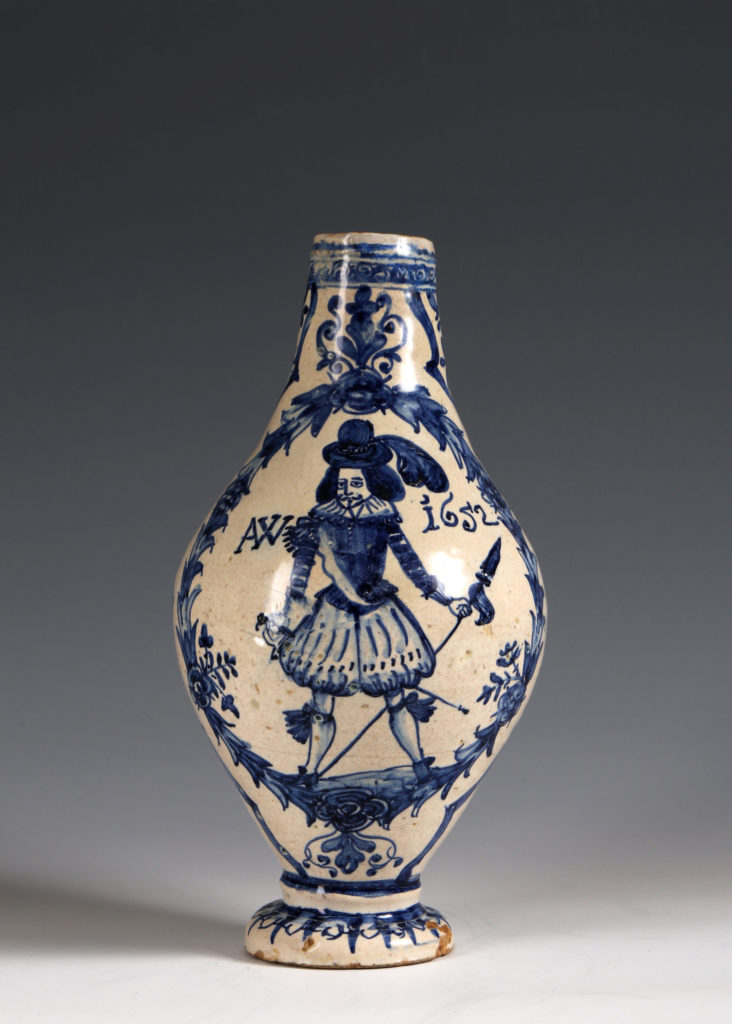 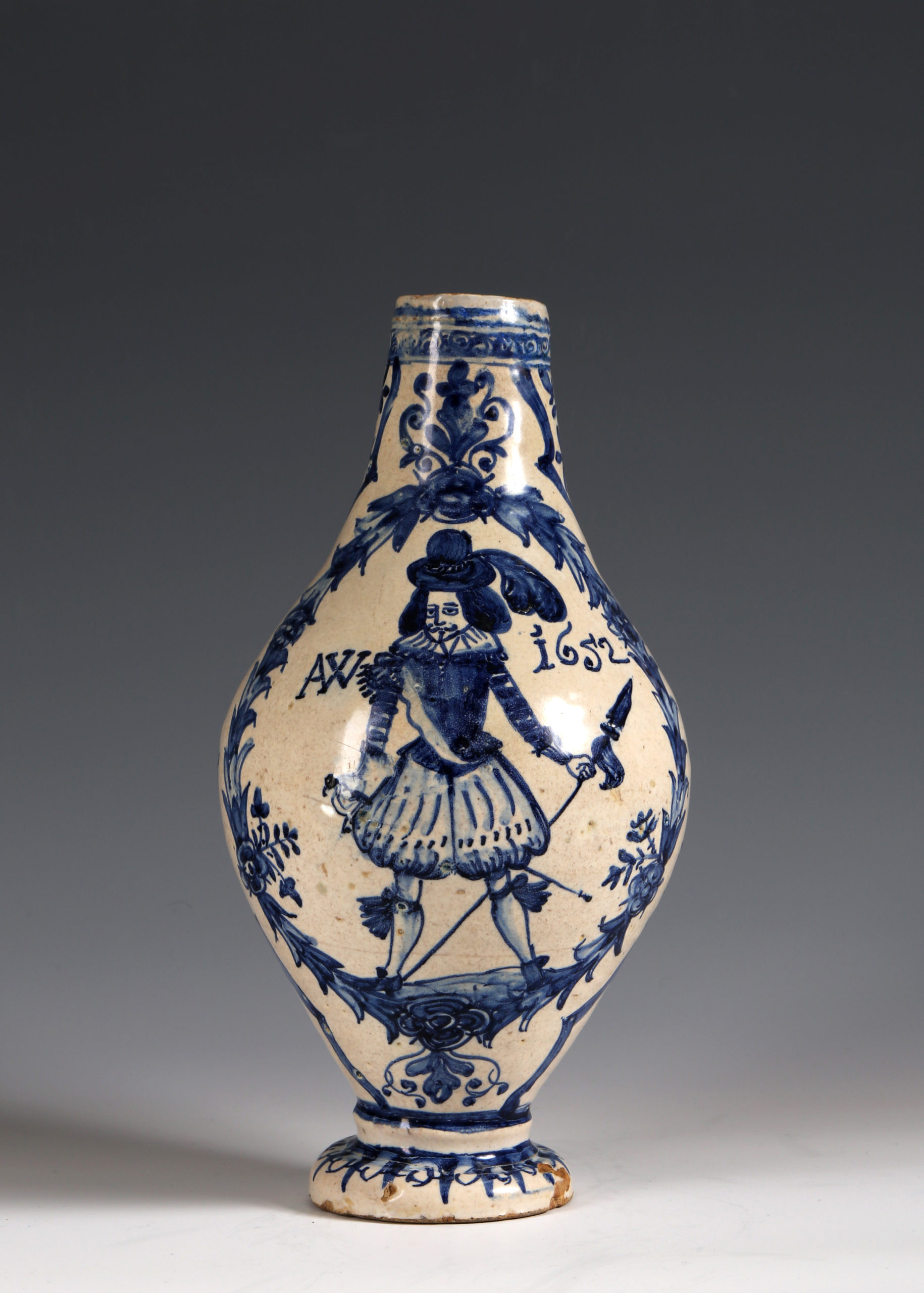 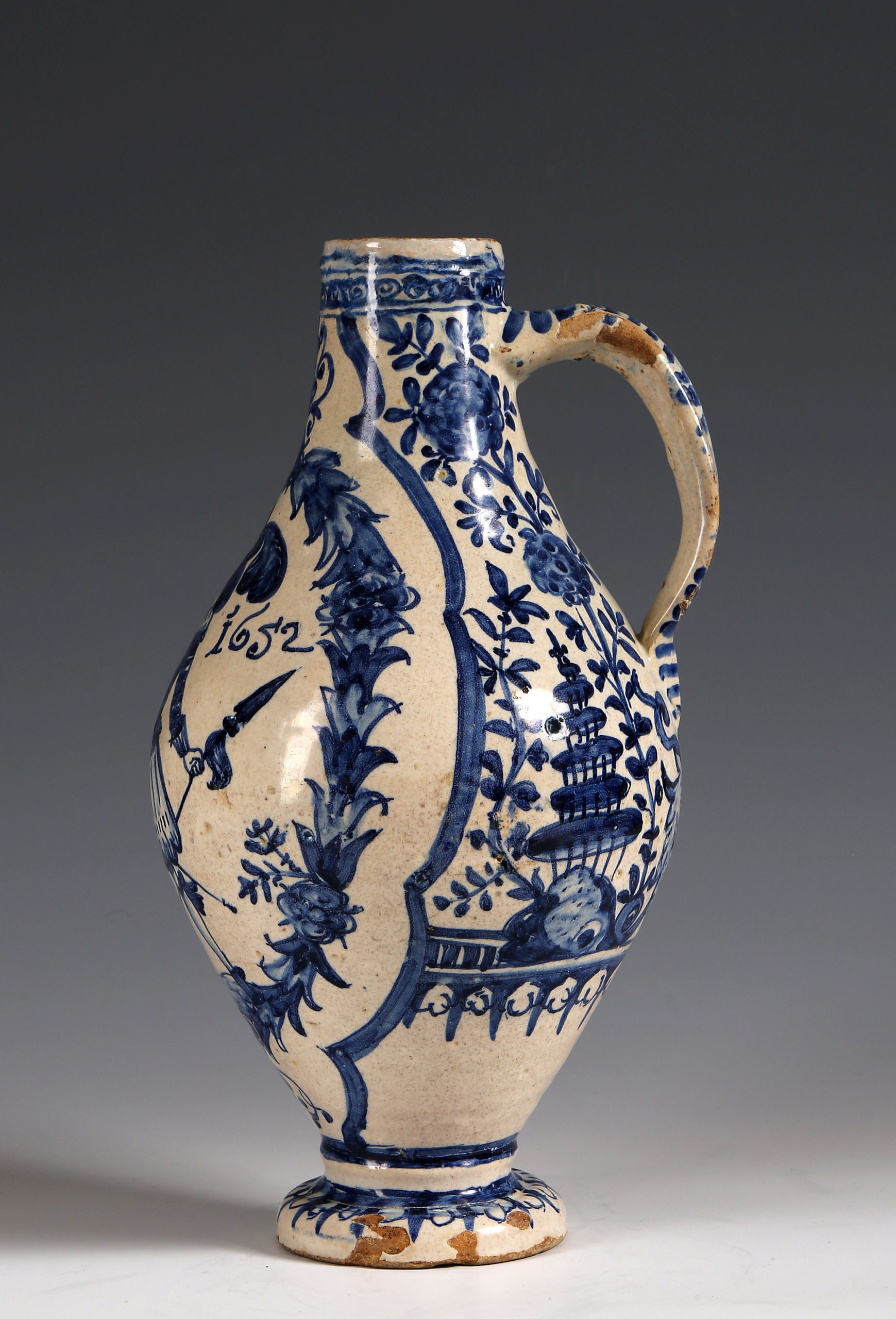 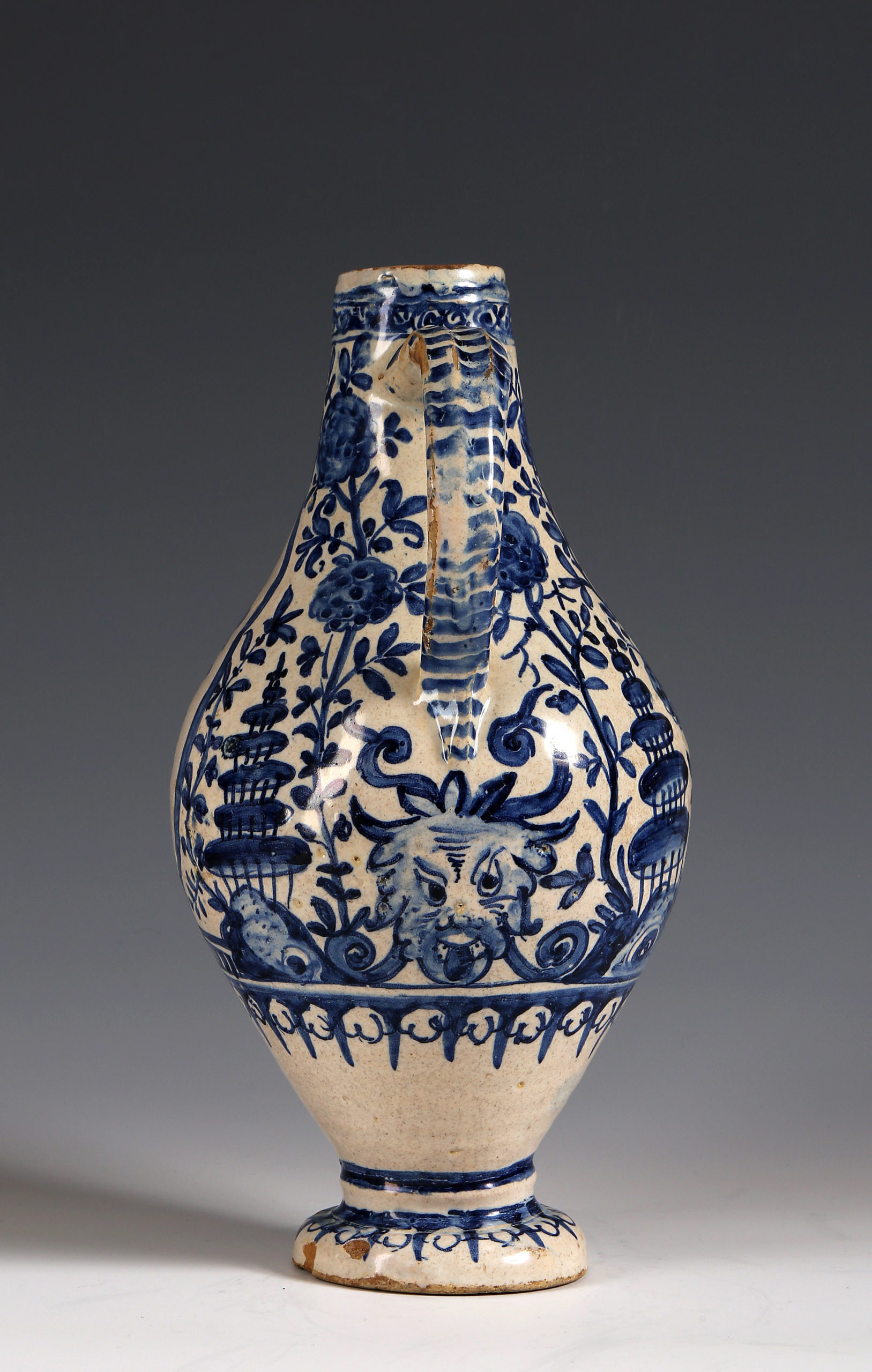 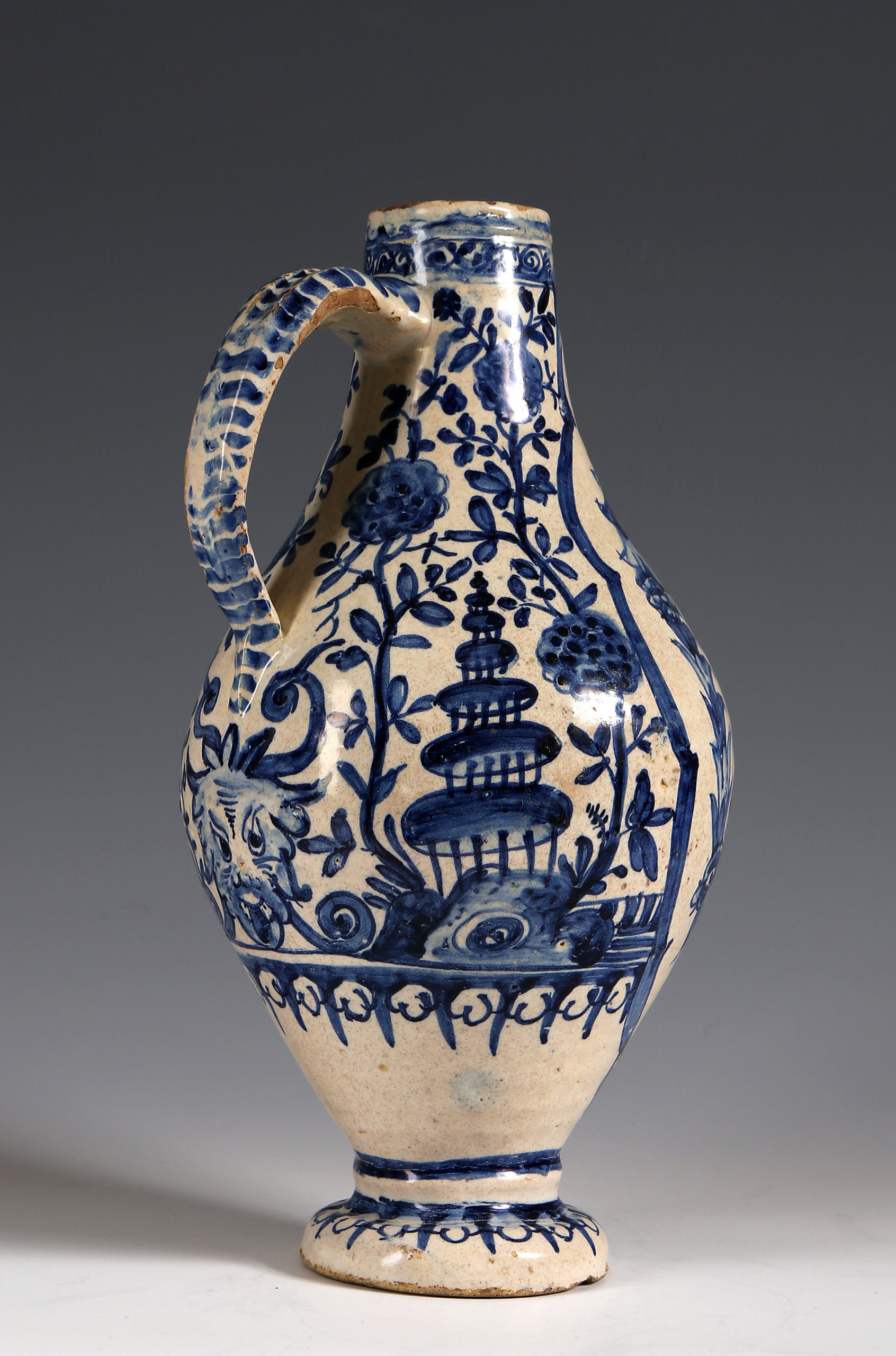 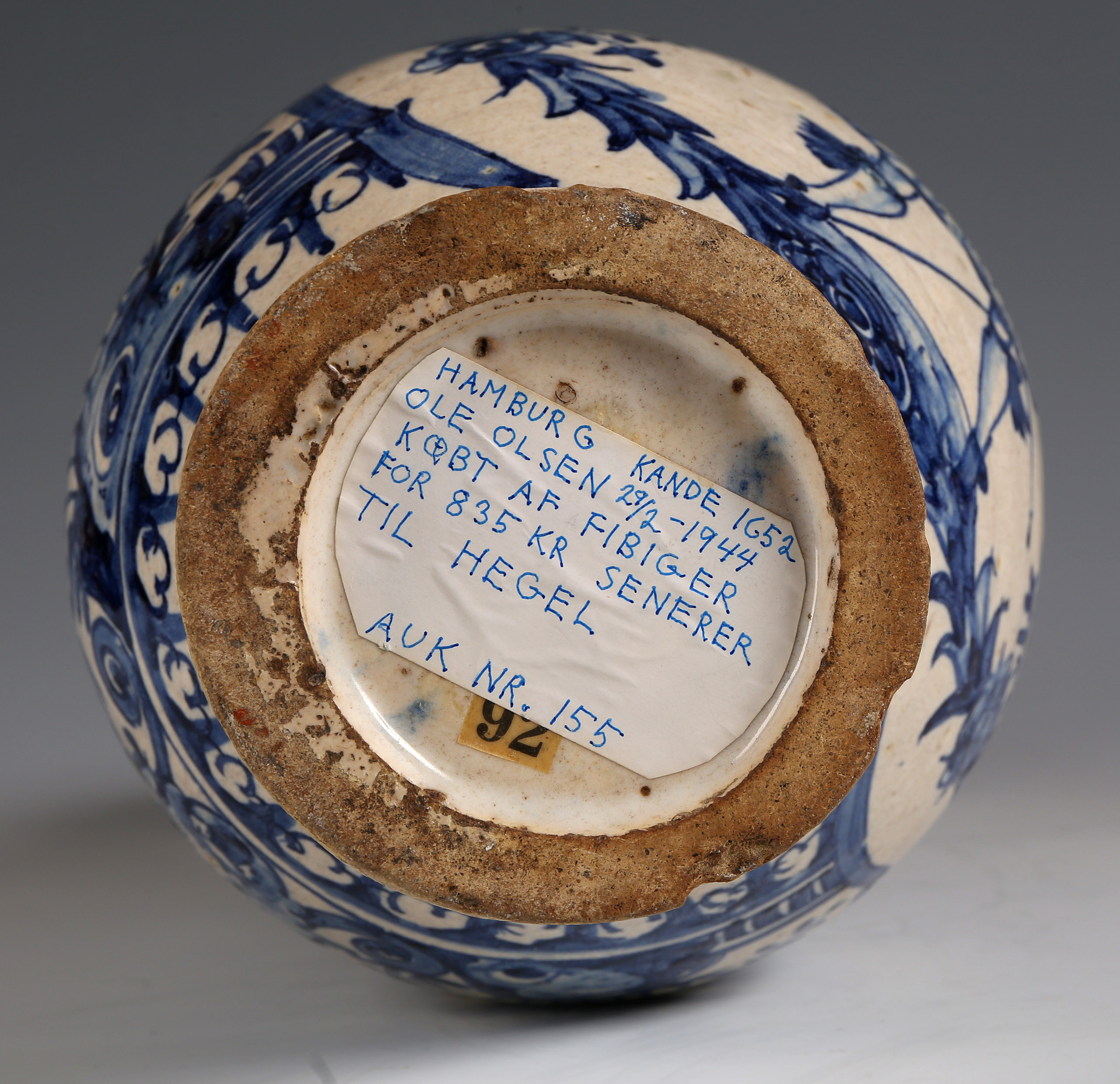 This exceptionally large jug is decorated on the front with a well-armed and splendidly dressed Portuguese gentleman within a wreath, the reverse with pagodas or fountains amongst exotic foliage and centred with a grotesque mask.

For a long time, this group of wares were thought to have been produced in Hamburg, and were attributed as such by Justus Brinkman, director of the Museum für Kunst und Gewerbe there in the 1880s. He found many such pieces in the area and believed that they were Germany’s earliest faience production. The confusion is understandable as the form of the jugs is Northern European, and many of this group bear German names and coats of arms. In fact, these pieces were exported from Lisbon to Hamburg and other Hanseatic League ports between 1620-1670 and can be shown to have reached places such as Danzig, Glückstadt and Amsterdam. Brinkman’s collection remains in the museum in Hamburg and is the largest collection of these exported Portuguese faience wares, published in Lissabon-Hamburg Fayenceimport für den Norden, by Ulrich Bauche.

The trade between Hamburg and Spain and Portugal was instigated by a community of Sephardic Jews who had been established in Hamburg since the 1590s. They were mainly engaged in the wholesale trade importing sugar, tobacco, spices, cottons, etc., from the colonies and they took a prominent part in the foundation of the Bank of Hamburg and some gained considerable distinction in medicine, science and diplomacy. During this period, the blue and white and polychrome pottery of Lisbon was the highest quality tin-glazed earthenware produced in Europe, only being superseded during the second half of the century by the Delft pottery of the Netherlands and would have been a valuable part of this luxury trade.

Documents pertaining to the Jewish involvement in the trade of Portuguese faience to Hamburg are said to have been destroyed by a Nazi official when discovered in the 1930s and this is why the misunderstanding of the pieces being German continued for so long.

Portuguese traders were the first Europeans to import Chinese porcelain specifically made for export on a large scale in the 16th Century. Since it was so expensive Portuguese potters were quick to produce faience copies of the Chinese ‘Kraak’ wares in the 1620s. Here, the reverse is decorated with Chinese motifs of pagodas on scholars’ rocks amongst exotic foliage, including chrysanthemums.

Portuguese faience pottery of this period is found wherever the Portuguese seafarers traded including the colonies in North America.

Condition:
A 7 cm x 2.2 cm section of the rim of the neck restored

Provenance:
Label to the bottom suggests that this was from the collection of Ole Olsen, bought at Fibiger auction, 29 February 1944, lot 155. A further label bears the number 94. This does not appear in the catalogue: Hermann Schmitz, Generaldirektør Ole Olsens Kunstsamlinger, (Munich, 1925)