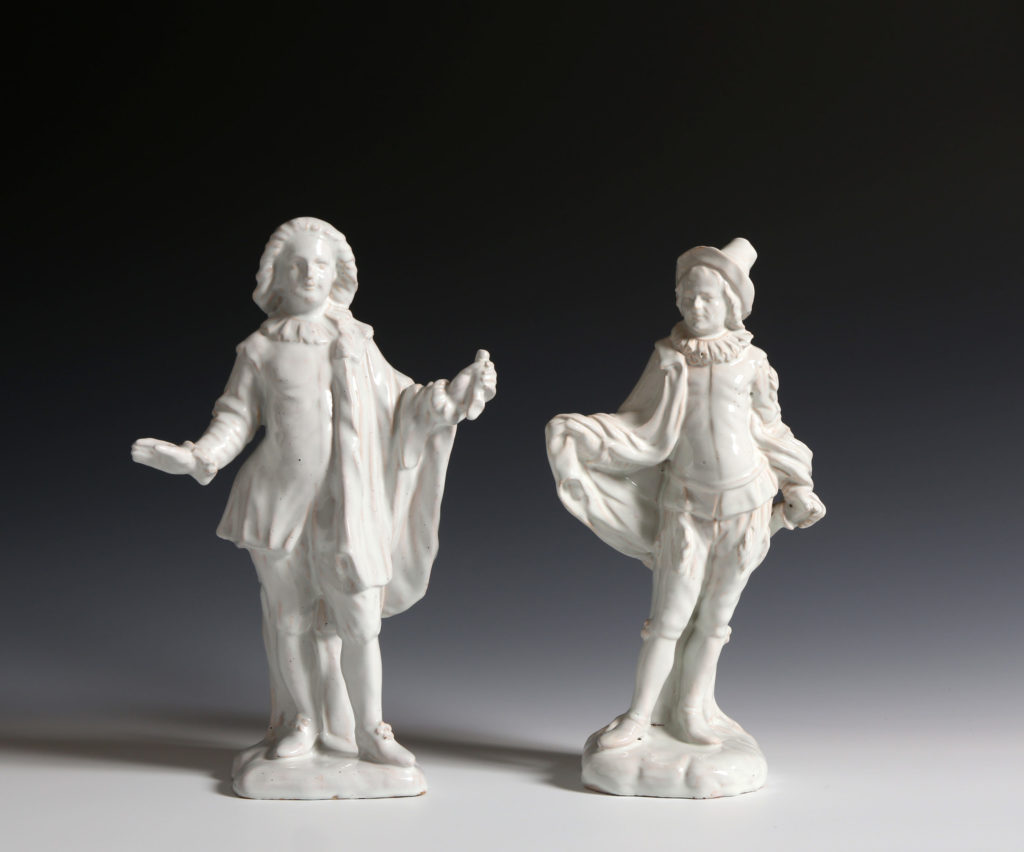 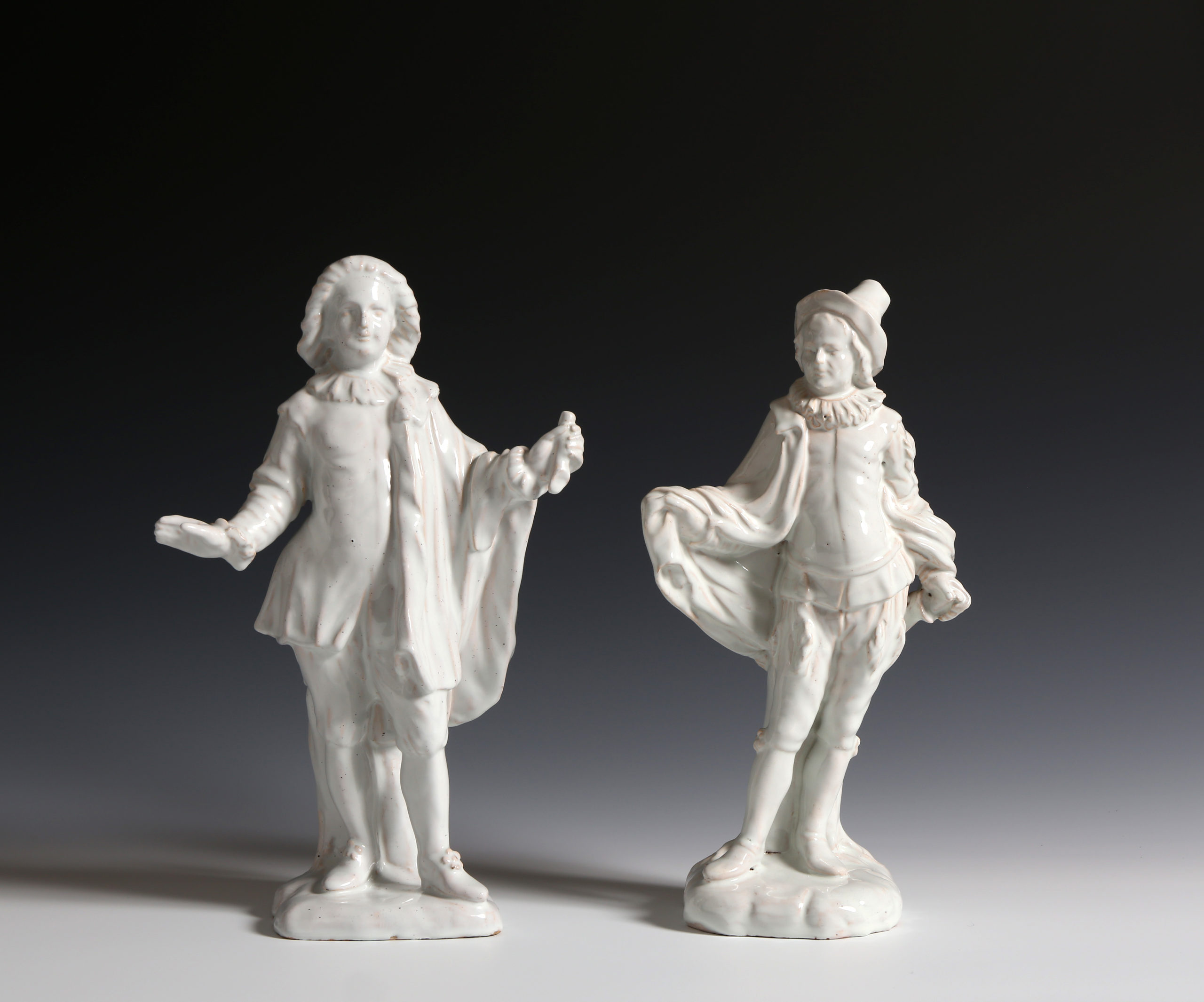 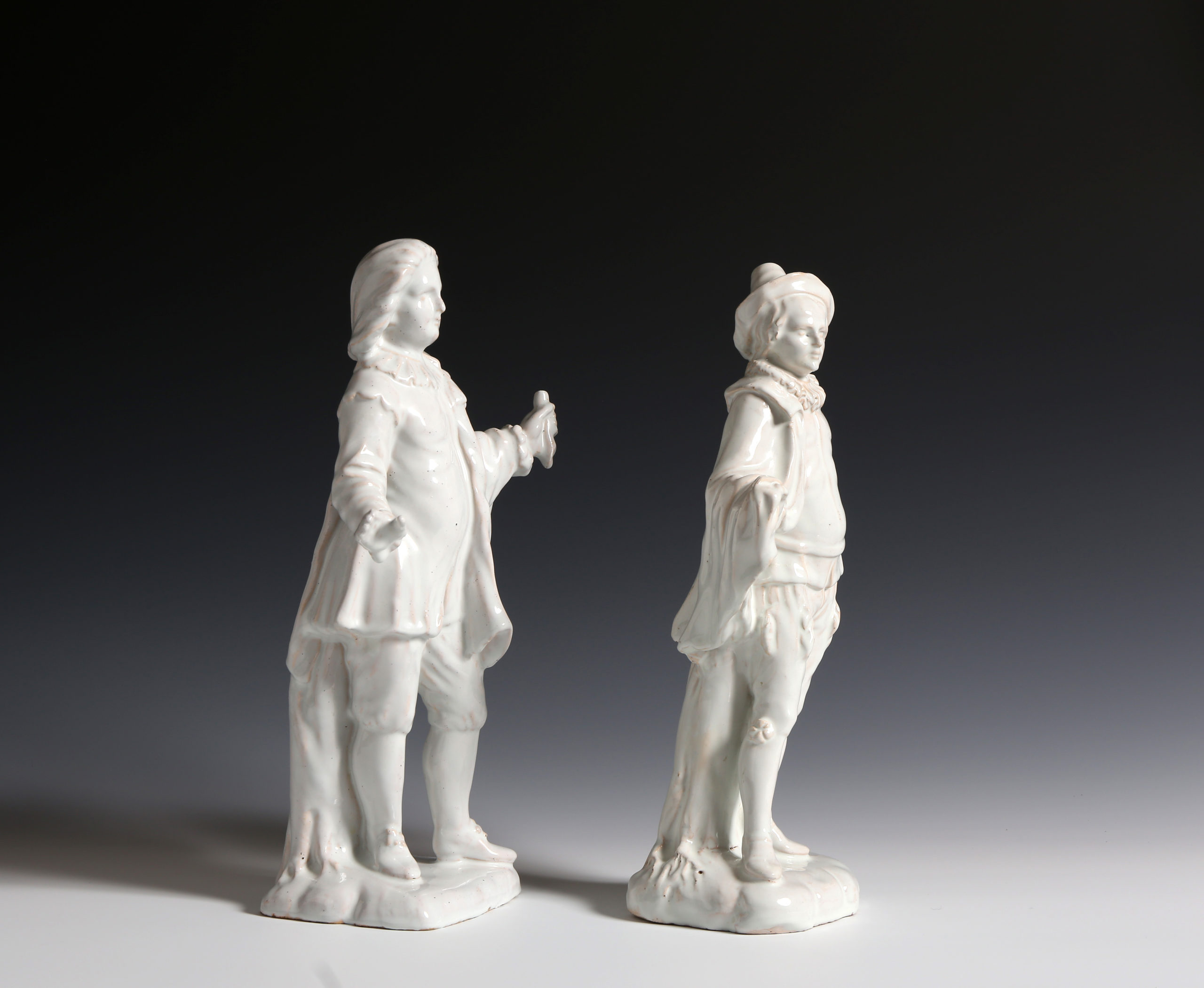 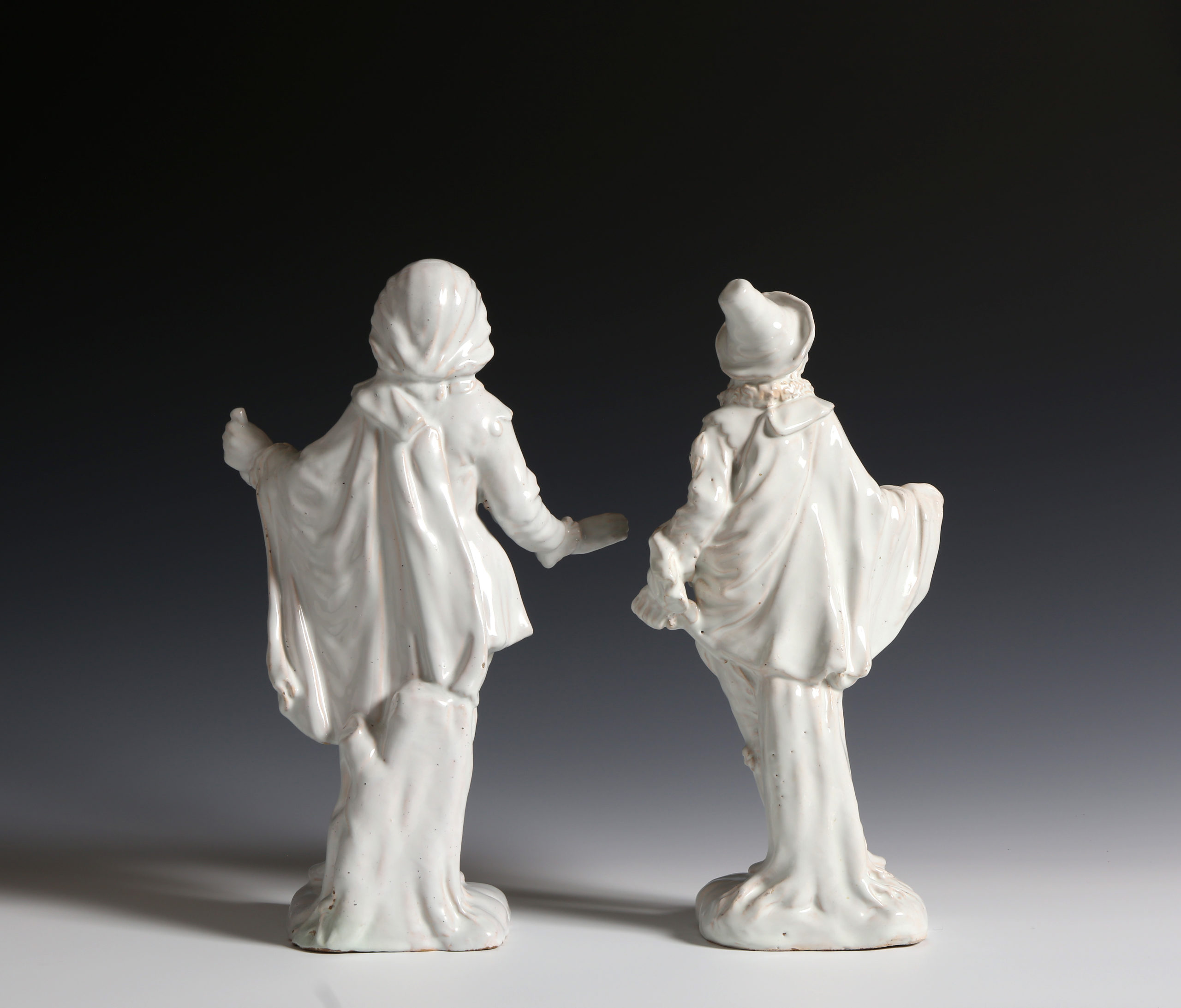 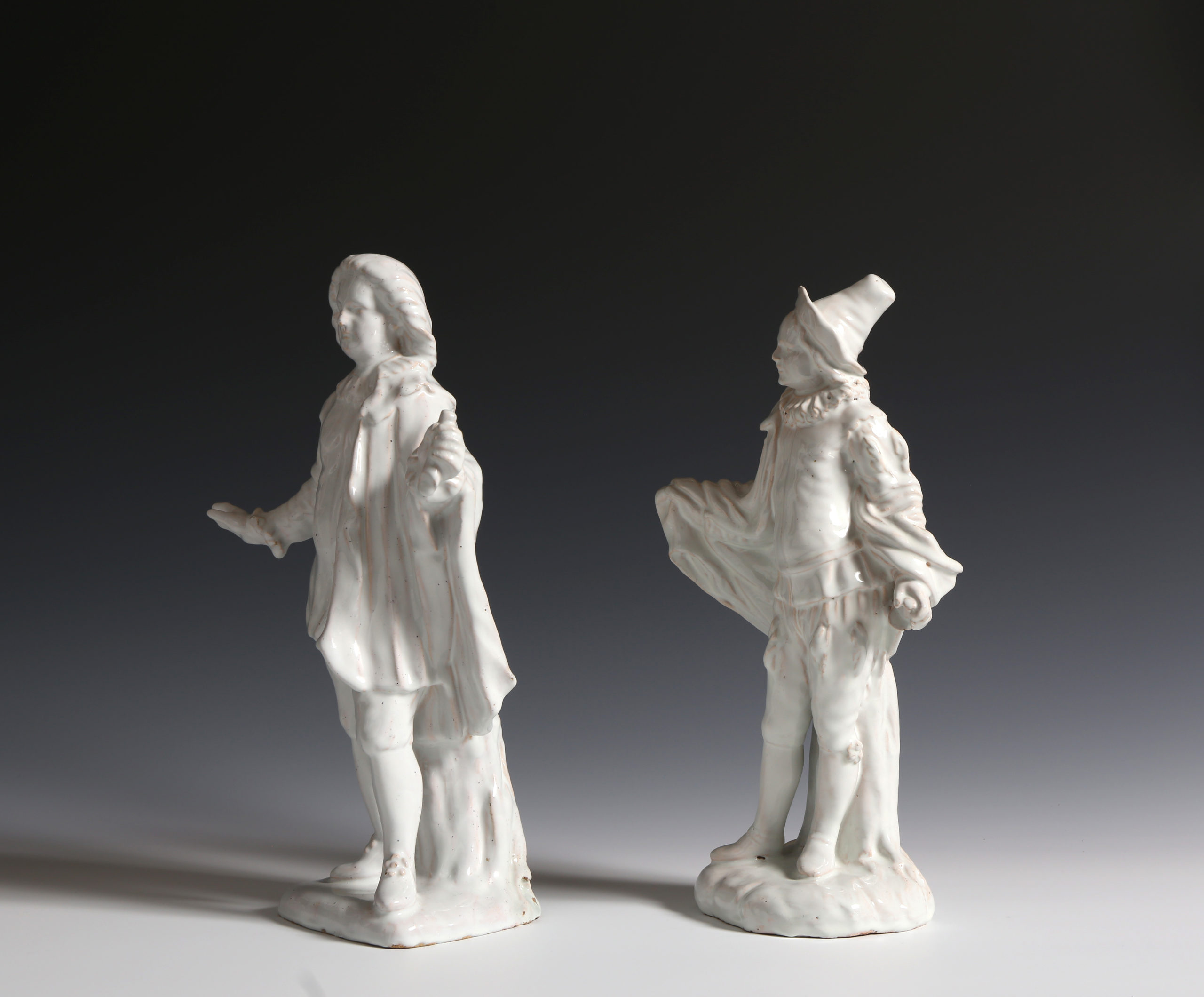 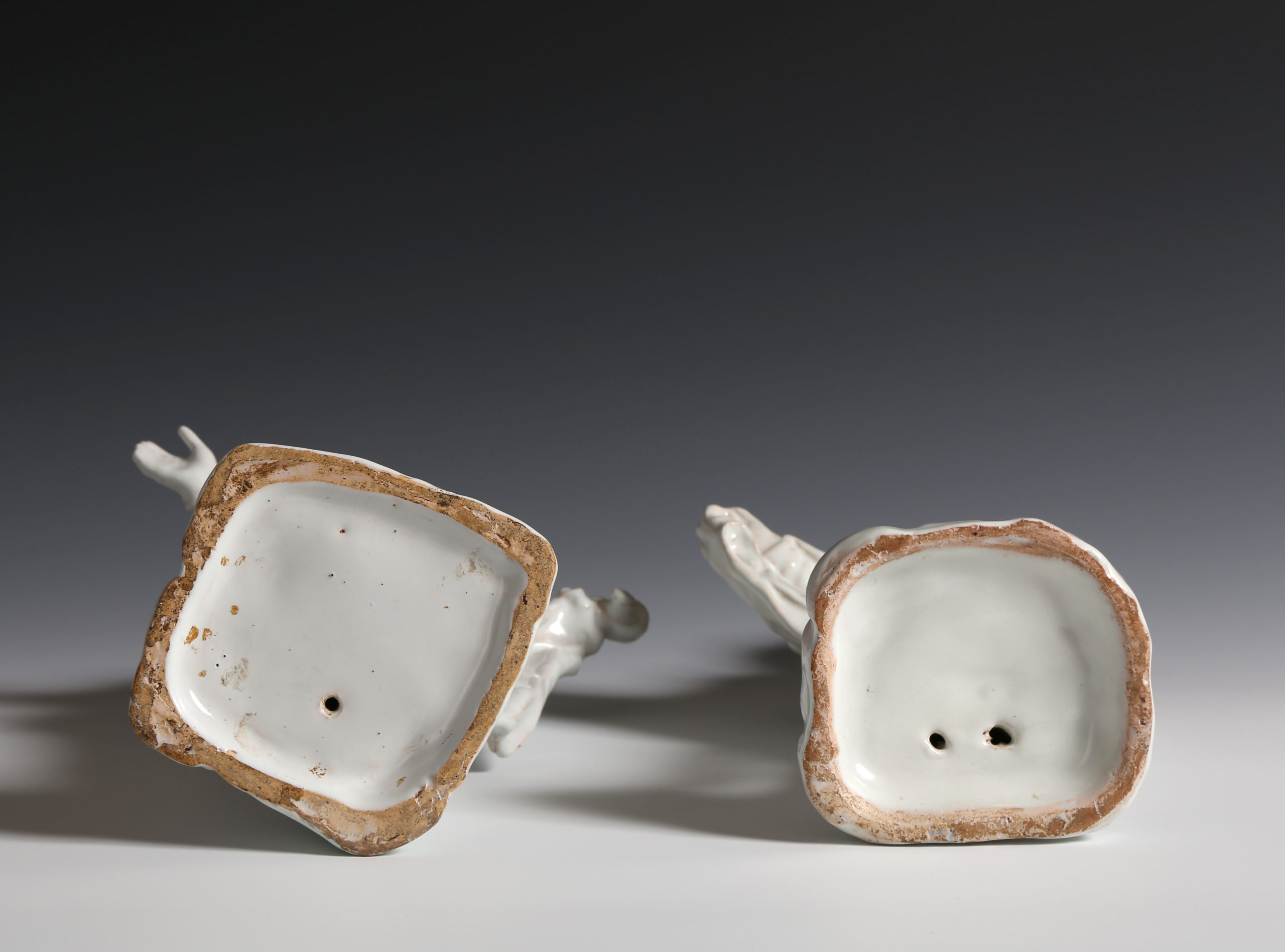 From a set of five figures from the Comédie-Italienne that also includes Pierrot and the Court Abbot, all made in Paul Hannong’s factory from 1745-1748.

These rare figures are considered to be amongst the most beautiful sculptural creations of Strasbourg; the tin-glaze thinning around the contours reveals the pinkish body of the clay which accentuates the modelling.

The Italian Commedia dell’arte was popular in France until its expulsion in 1697 for its offensive satire. It was allowed to return in 1716 and was called the Comédie-Italienne. It was immortalised in numerous paintings by Antoine Watteau and popularised in engravings. Being improvised, the precise naming of the characters was fluid.

L’Indifférent (or Mezzetin Dansant) seems to derive from a drawing by Watteau; the other bears a strong resemblance to a drawing of Mezzetin by François Joullian, although could also be an interpretation of Scaramouche. 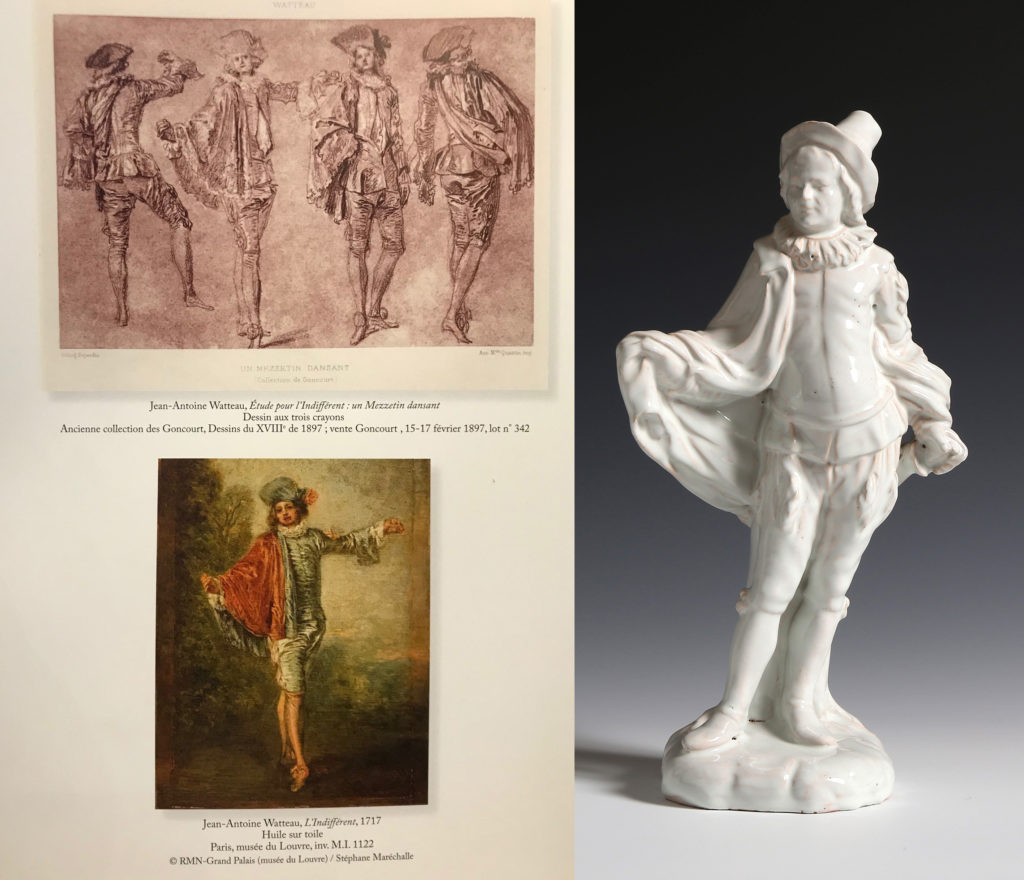 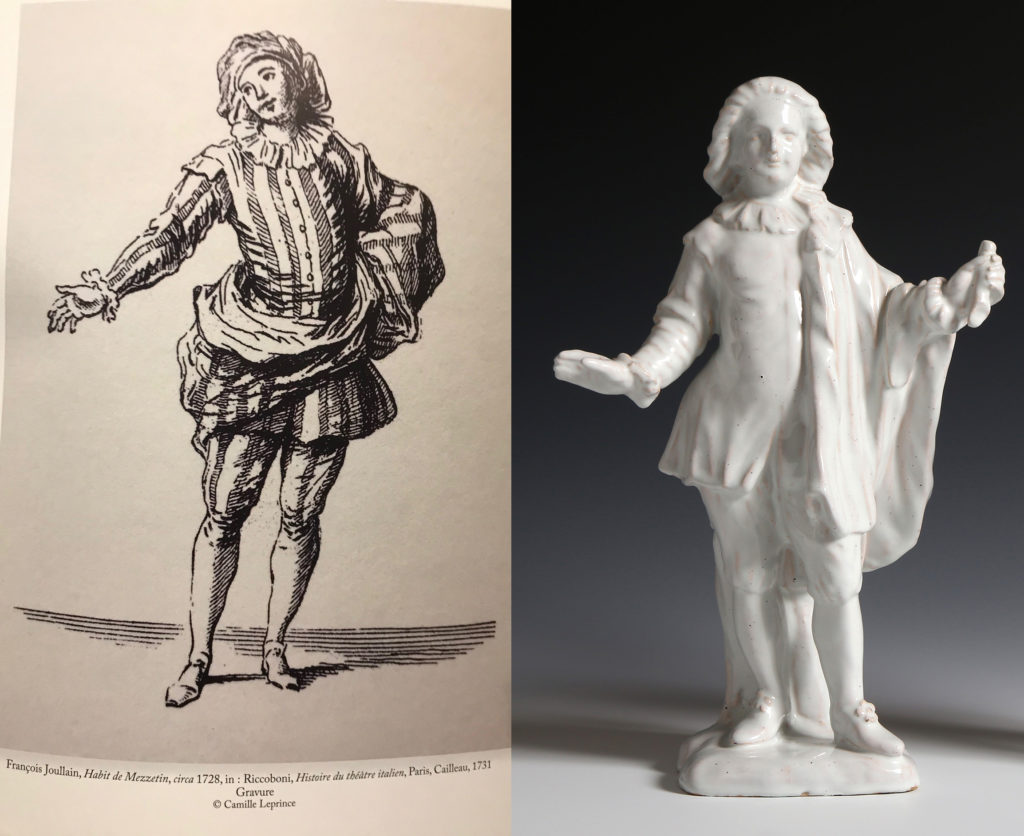 Three polychrome figures of this series are recorded, two in the Ludwig Collection, Bamberg, (l’Abbé and Gilles or Pierrot), and one in the Museum of Decorative Arts in Strasbourg (Mezzetin).

A set of four white figures was presented in the Gallery Vandermeersch in 2017 in the exhibition, Comédies de Faïence, La sculpture à Strasbourg sous Paul Hannon (1740-1754). These white figures came originally from the collections of the counts of Ottingen-Wallerstein.

Camille Leprince noted just two further examples recorded of the Mezzetin, one in the Minneapolis Institute of Arts (Inv. MIA. 54.27.80) and the polychrome example in the Museum of Decorative Arts in Strasbourg which is a close variant. Leprince cited only one known example of L’Indifférent in a private collection, we think that this is probably the one that we are presenting here.

Condition:
Mezzetin: Break through right arm at shoulder and at wrist. Thumb and chips to fingers restored. Minor chips to fingers of left hand and scroll
L’Indifférent: small chips to extremities filled

A figure of Pierrot with some polychrome highlights was in ‘The Collections of Hanns and Elisabeth Weinberg, Antique Porcelain Company’, Sotheby’s, New York, November 11, 2006, lot 559  and Christie’s, London, ‘Porcelain from the Patricia Hart Collection’, July 5, 2012, lot 17